11 Most Creative Placards That Will Make You Think

Politically correct is passé. Politically creative is the new rage. Cheerleading is no longer the chant of a beaten, monotonous slogan on loop. It is now as creative as it gets. At least on the placard, it is.

The Voice is funny and pun-ny

Words like “personal opinion”, “demand for equal rights”, “people power”, “protest march” are so breezily used to punctuate our sentences these days. We spit those words like they are our names. Well, I wouldn’t say that’s entirely false. These words are, in fact, now our identity. As global citizens, we believe in the power of unity. We believe in putting forth our opinion. We believe in getting heard and effecting change. Indeed, our inchoate and amorphous estate can be organized into effective political action relevant to present social needs and opportunities. Till a few years back, we were asking ourselves a question: is the act of protest cherished by the politician and not the common man? We, the naïve and gullible plebeians are used to being ensnared into the politicians’ propaganda, chicanery, slander and lies. But the times changed and how!

We wouldn’t say anything about the political impact of these marches, but the common people are definitely cherishing these campaigns just as much as their governing counterparts. While social media has made us all a little sarcastic and snarky in our statements, people holding these placards have a special way with words.

You don’t have to believe us, here’s a roundup of the most innovative placards at matches, marches and rallies:

1.Trump’s tenure is a nightmare, but a meme-fest nonetheless 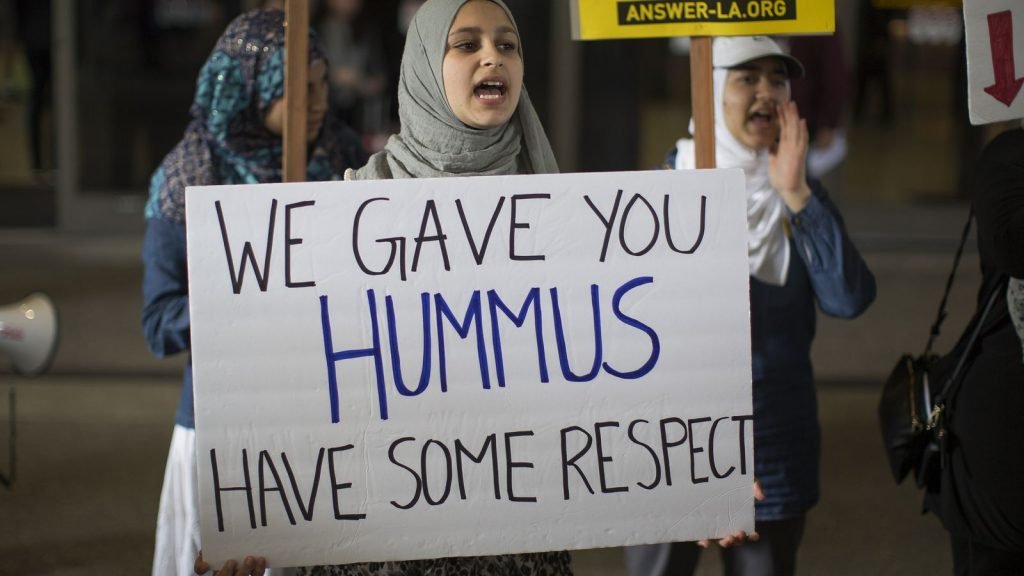 Where’s the fun? Well, have you tasted Hummus and Pita? It is a delight for the taste buds, honestly! So if the protester demands respect on culinary grounds, we should give her.

2. Saying the obvious out loud 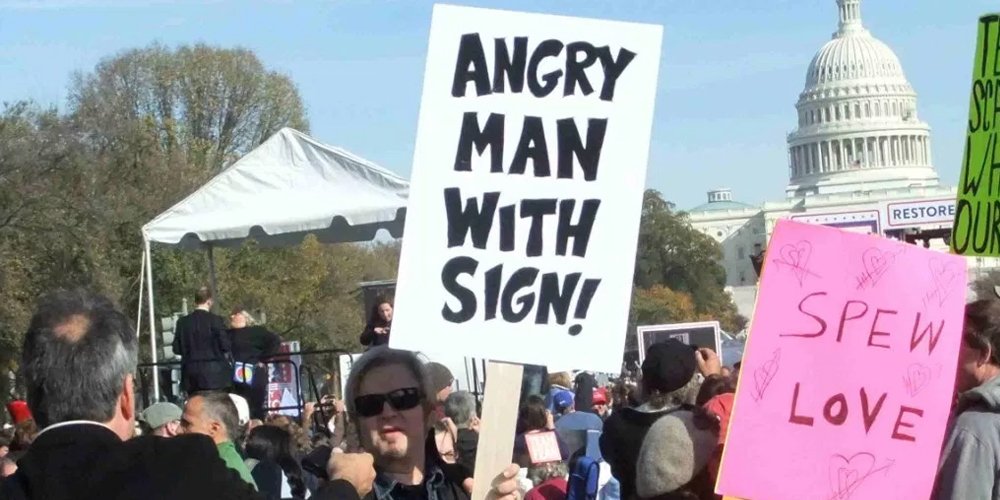 Context: You guessed it! This one is from the protests that everyone wanted to be a part of: the Anti-Trump slogans were leading the march, when someone thought it would be nice to identify himself as who he is: an angry man with a sign. Smooth, indeed!

3. Some practical lessons in marketing 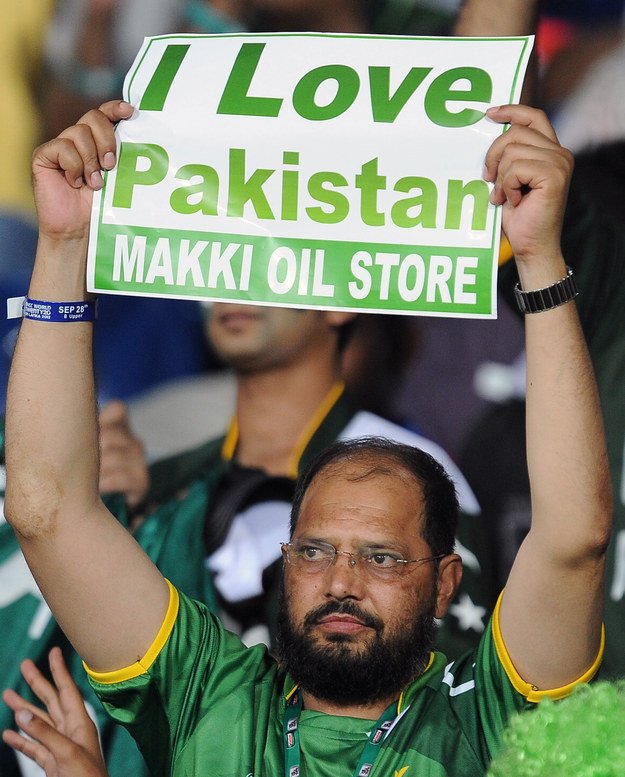 What do you expect at a cricket match? With a poetic fervour, people chant and cheer for their team. But this guy looked at his match tickets and thought, “Well this is a great place to grab eyeballs!” And while he declares his love for his team in the simplest amalgamation of those three magical words, he slips in one brand name. Our bet is the sales of Makki Oil Store have blown off-charts. The next time you need lessons in ambush marketing, you know who to go to!

4. Science puns and jokes are the best, really 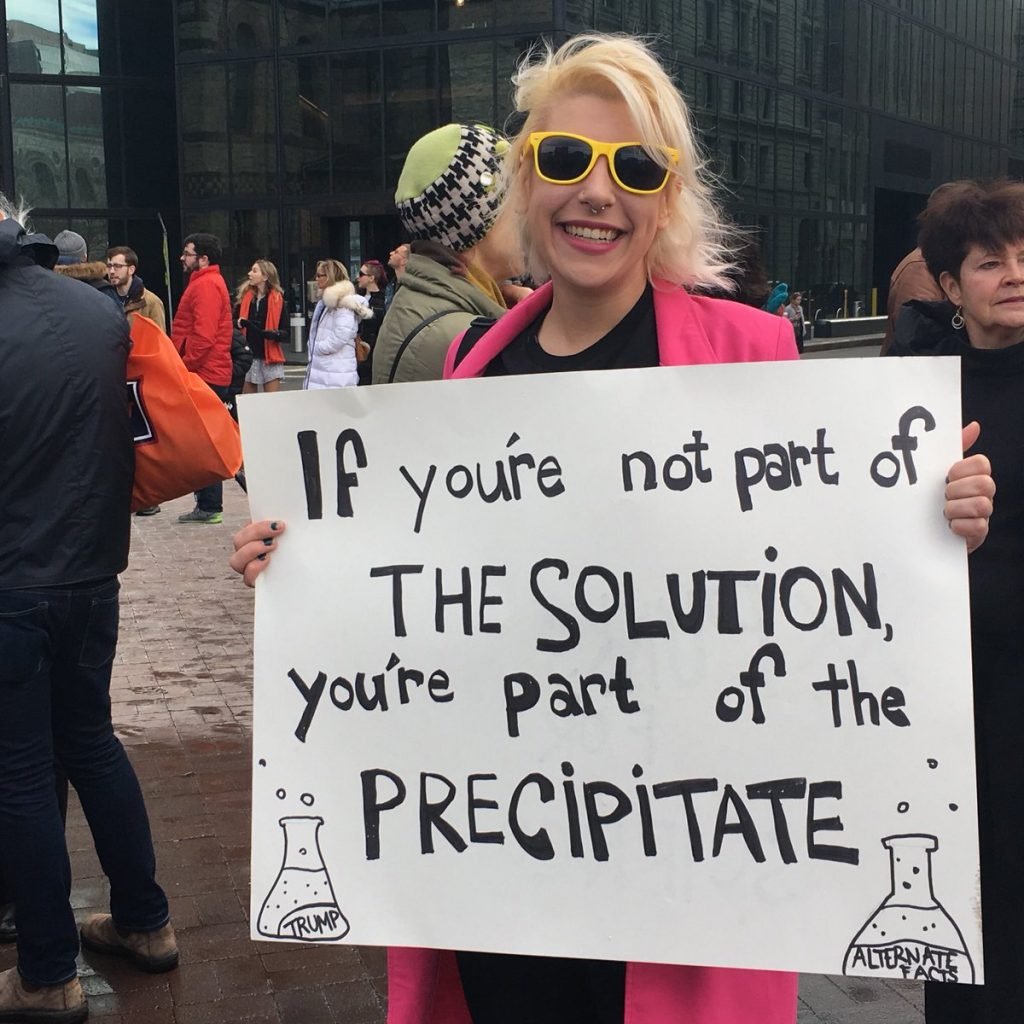 Context: On April 22, 2017, more than one million people in more than 600 cities around the world marched to defend the role of science in policy and society. The other slogans included, “Less Invasions, More Equations”, “WTF!!! We trust Facts”, “Think Like a Proton: Stay Positive”, “Alternative facts are √-1”, among others. 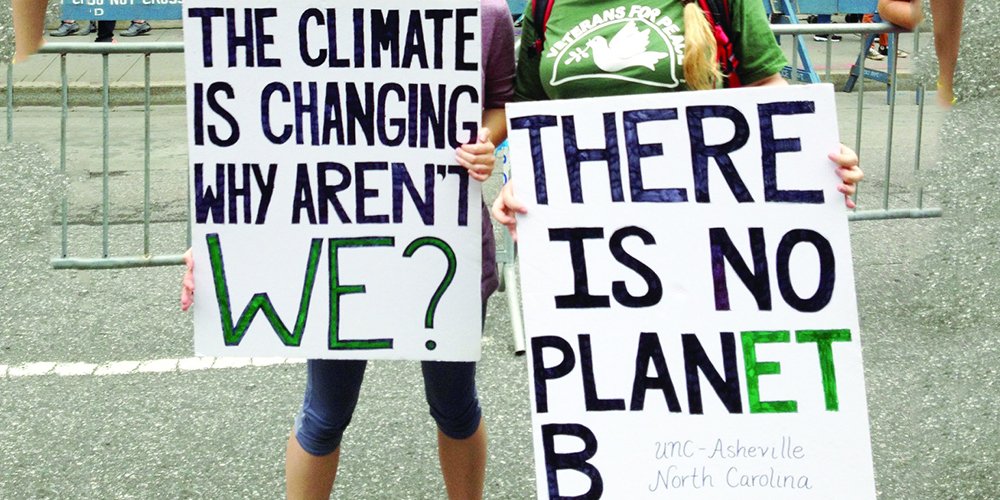 Climate change is very real, and we think its repercussions are not being felt as gravely as they should. Not sure if this was coincidence that these two were spotted together- but it makes for a compelling rhyming scheme to put across these statements that are just as relevant individually. This is easily a great idea of protesting with your best friend.

6. The opposite of “Creative” 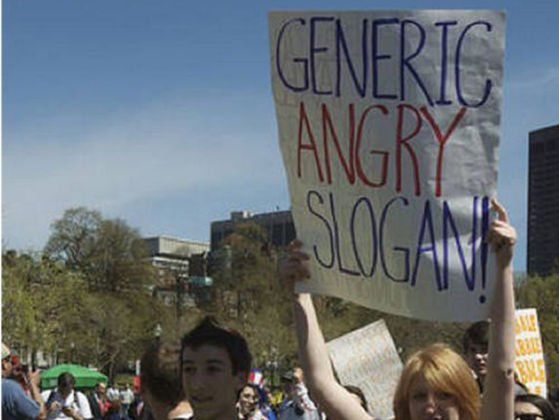 Protesters are also pressed for time. So, when you cannot think of an insanely creative way to put across your point, or a pun to slide into the march with sarcasm, three words come to the rescue: Generic Angry Slogan. Something about the slogan will make you ticklish. And yet, the anger resonates loud and wide.

7. Sometimes, you have to state the obvious 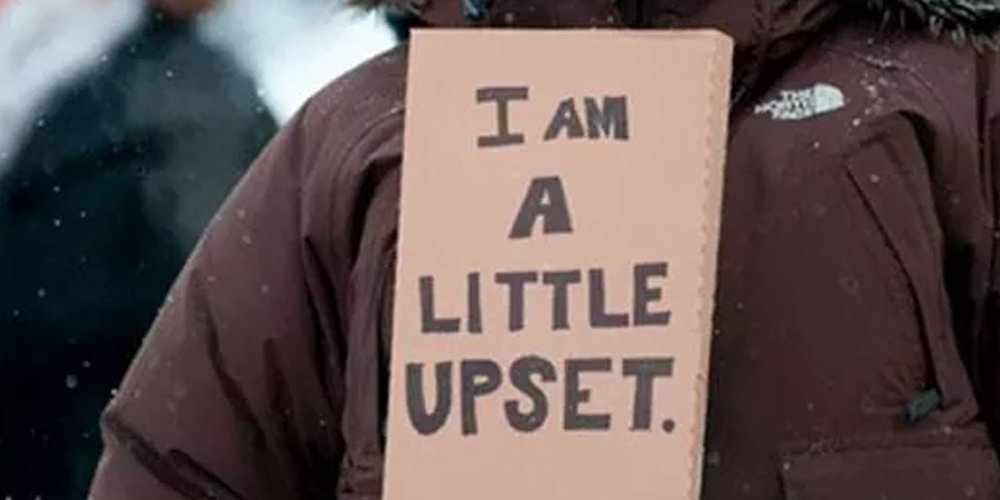 This set-up is a flair for the dramatic. This oscillates between ‘I feel murderous’ and ‘I have been poked’. And while the slogan doesn’t give away much, those expressions will make you sit back and take notice. 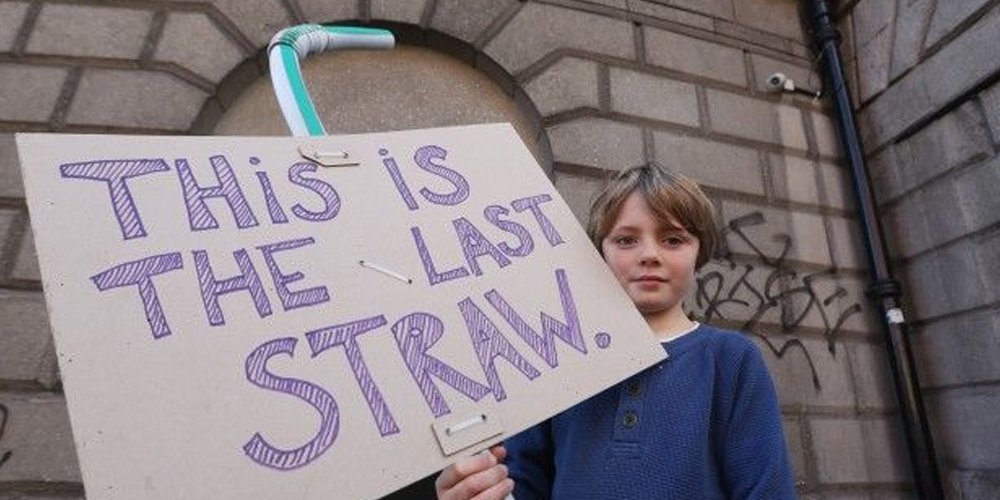 The guy probably hates crowds. That’s conjecture on our part, but he sure finds stepping out with a sign and anger too cliched. The result? You have a smiling face with a placard that has ‘pun’ written all over it. 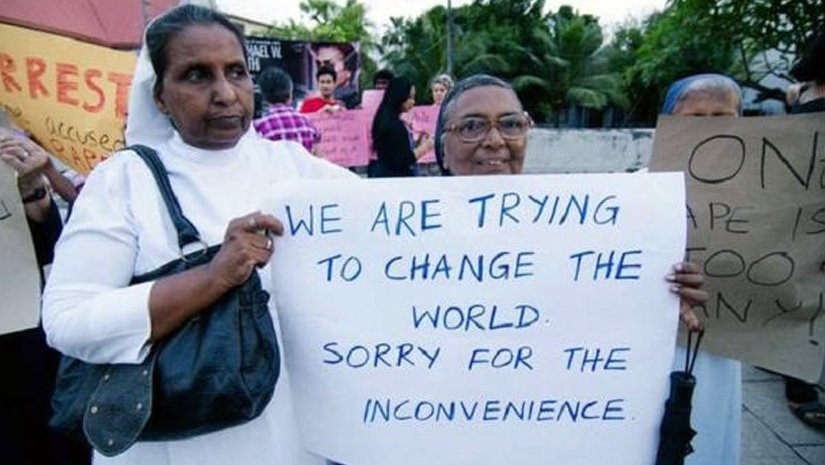 I doubt if they are actually sorry to be pushing for their rights, but these ladies do a great job of saying it out loud. If you are going to be changing the world, you have to let the skeptics believe you. How? Be silently unapologetic, but warn them that change is going to be uncomfortable!

10. Nothing beats a Harry Potter reference 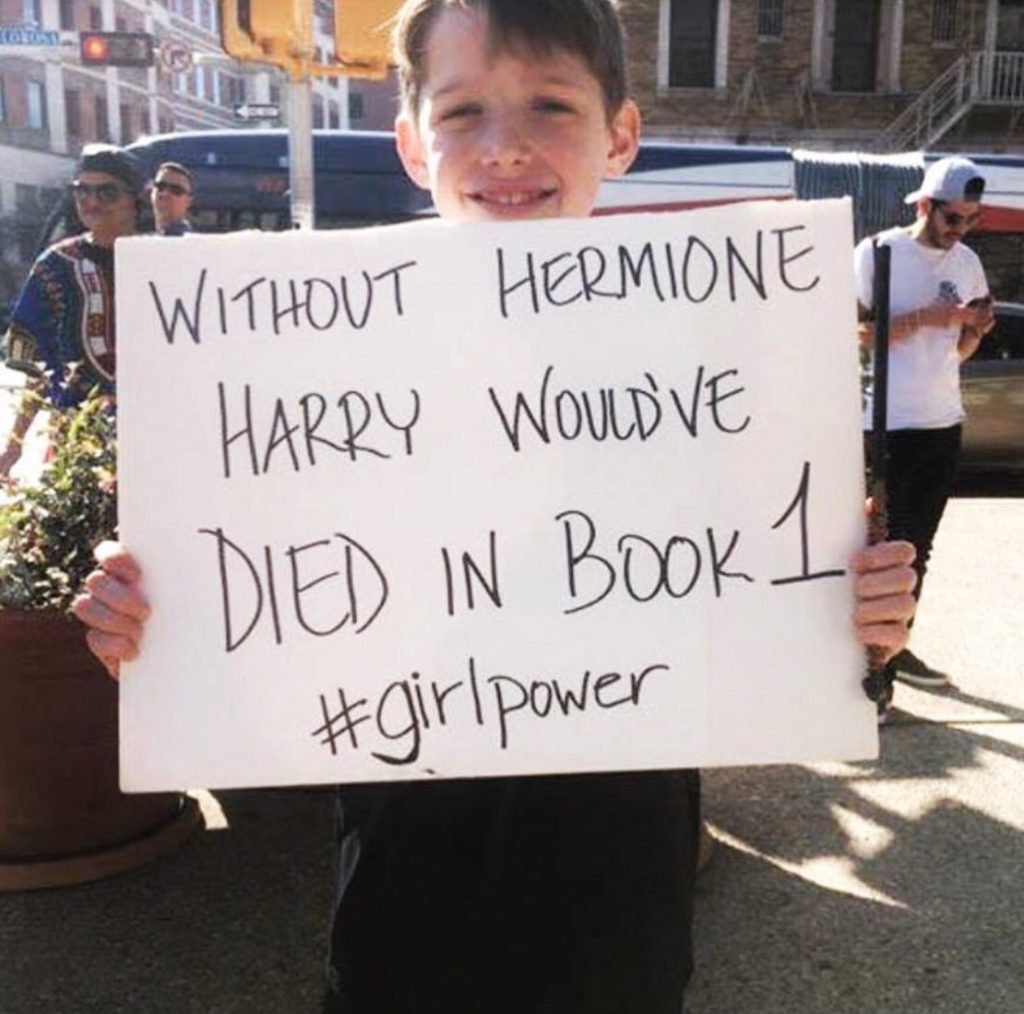 If you make a list of the most indisputable, foolproof arguments on women power, the Harry Potter universe is at your rescue. And if you have to talk about creativity, give a hard look at the placard for the Gryffindor uniform. 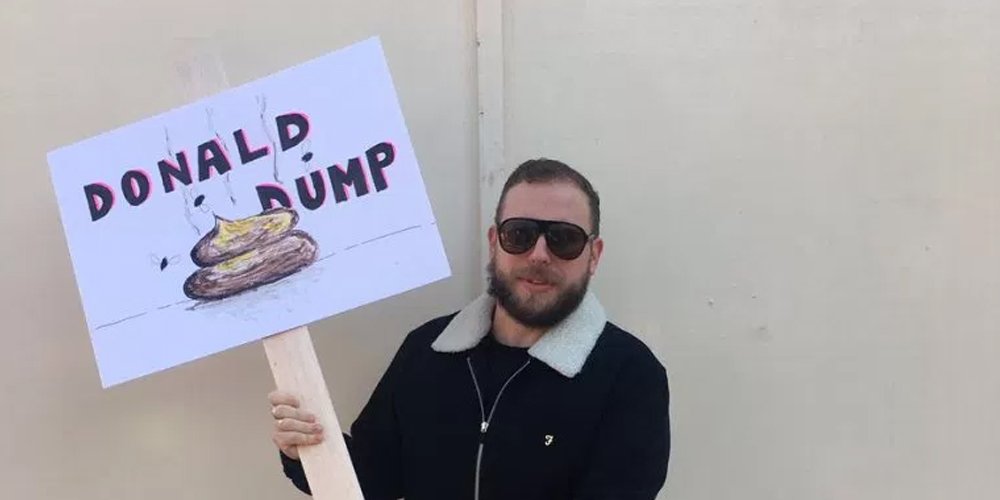 If throwing shade was an art, this guy would be a master artist. Poop lovers might be offended.