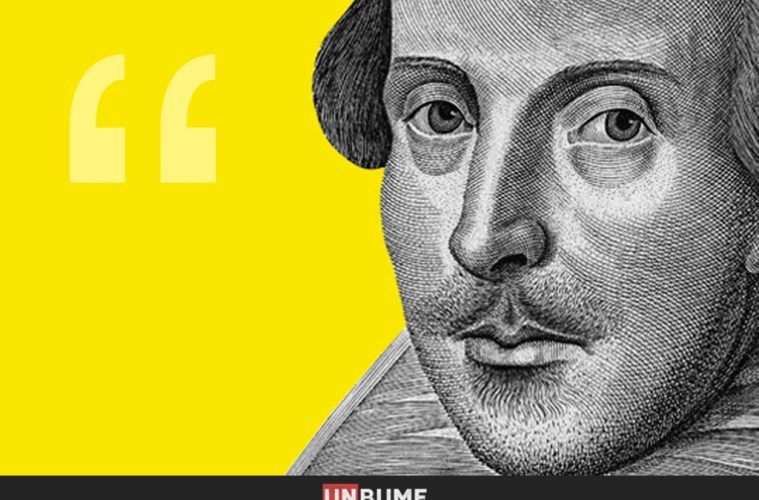 A study of English literature is incontrovertibly incomplete without a Shakespearean sonnet and verses. Clearly, Shakespeare needs no introduction. You can disagree with my previous statement, but you will be wrong. His plays have been performed more times than any other playwright’s. Even closer to home we hear, every now and then, a Bollywood director ambitious enough to claim that s/he is planning to produce an adaptation of a Shakespearean tale.

I have always loved contrarians; it is an obsession, if you will.  Now if I were to award the best one of the lot, it is him. The Merchant of Venice is one of the best comedies I have read. Honestly, who can not like Portia, one of the greatest women characters ever written? One of the best tragedies I have read, Julius Caesar, gave me a phrase I often pepper my routine conversations with, “Et tu, Brute?” They were both written by the same person. It isn’t everyday that I get to say this!

Sure, Shakespeare worked from a position of advantage: there wasn’t a lot of literature preceding him. So, he could write whatever expressed the extremity of his emotions the best. He put together adjectives with nouns and invented phrases- most of which we use even today.

So he put this freedom to the best use. He crafted insults that our woke generation would refer to as ‘savage’. I can almost imagine giving a high-five to the characters, as I yell, ‘what a solid burn!’ If words alone could perform stand-up, slapstick, improv and all other comedies, only Shakespeare could make it possible.

As I take you through the various insults coined by the Bard, a few of his works make repeat appearance, so you know where his sarcasm is at its peak. 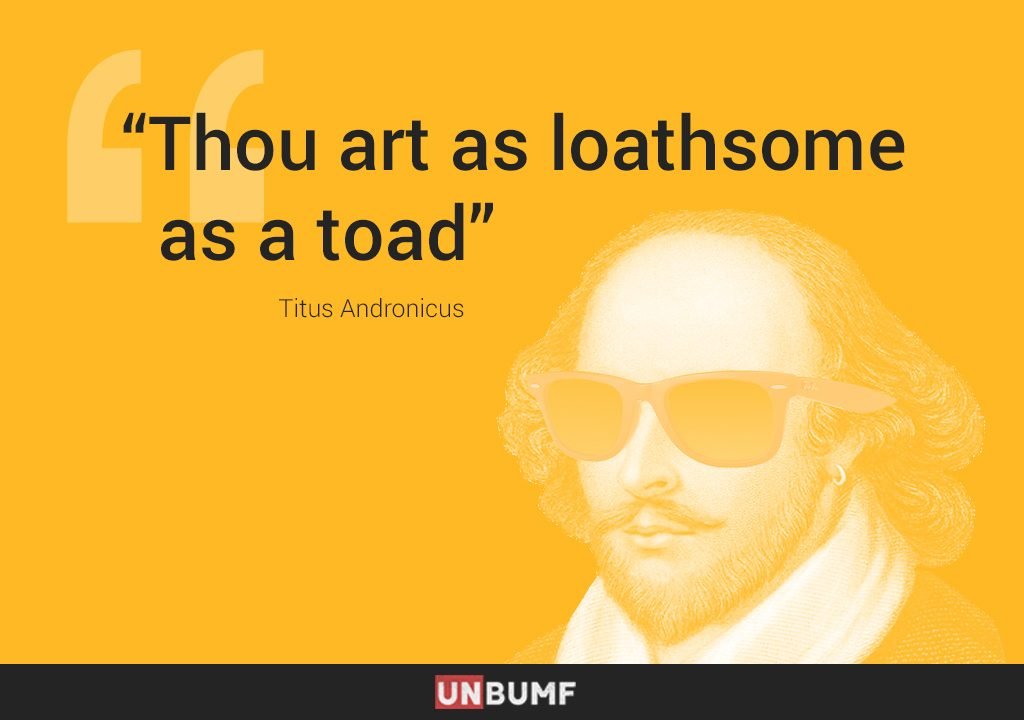 “Thou art as loathsome as a toad”

This is nearly the equivalent of our modern ‘you ass’, but who are we kidding? ‘Loathsome toad’ sounds way better and injects way more degradation.  “Villain, I have done thy mother” makes me think: is Shakespeare also the inventor of the ‘your mother’ jokes? At this rate of repartee, I can believe that too. 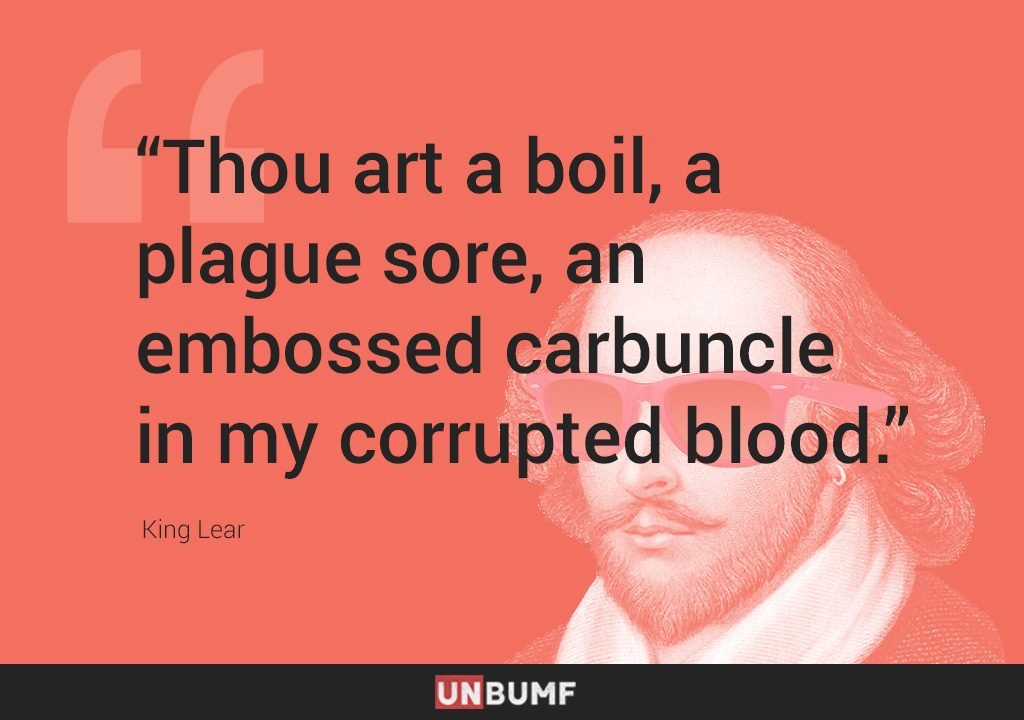 “Thou art a boil, a plague sore, an embossed carbuncle in my corrupted blood.”

“A knave, a rascal, an eater of broken meats, a base, proud, shallow, beggarly, three-suited, action-taking, whoreson glass-gazing, superserviceable, finical rogue; one-trunk-inheriting slave; one that wouldst be a bawd in way of good service, and art nothing but the composition of a knave, beggar, coward, pander, and the son and heir of a mongrel bitch, one whom I will beat into clamorous whining if thou deniest the least syllable of thy addition.” Yep, this is also possibly the longest insult ever churned out.

3. Much Ado About Nothing 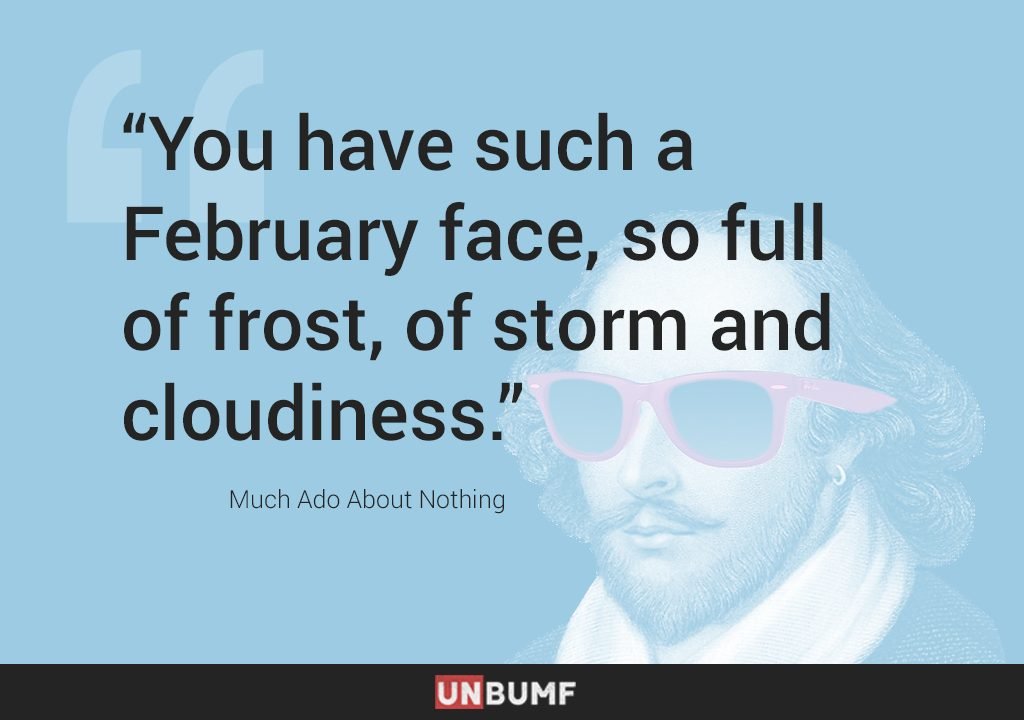 “You have such a February face, so full of frost, of storm and cloudiness.”

The person is so cold they won’t even need some ice for that burn. 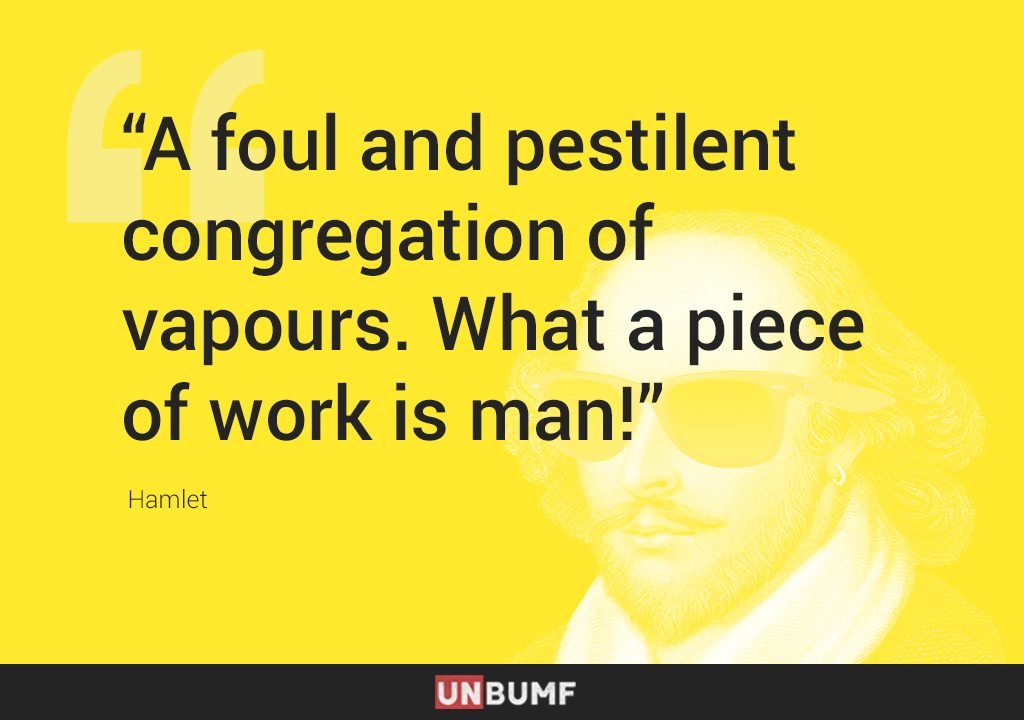 “A foul and pestilent congregation of vapours. What a piece of work is man!” 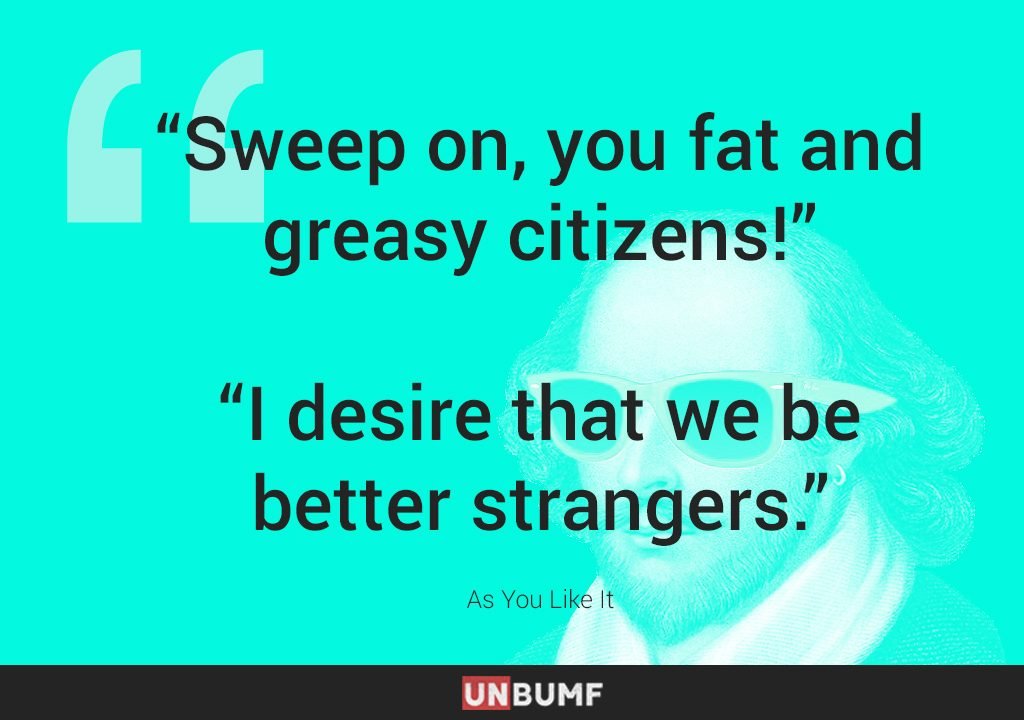 “Sweep on, you fat and greasy citizens!”

“I desire that we be better strangers.” 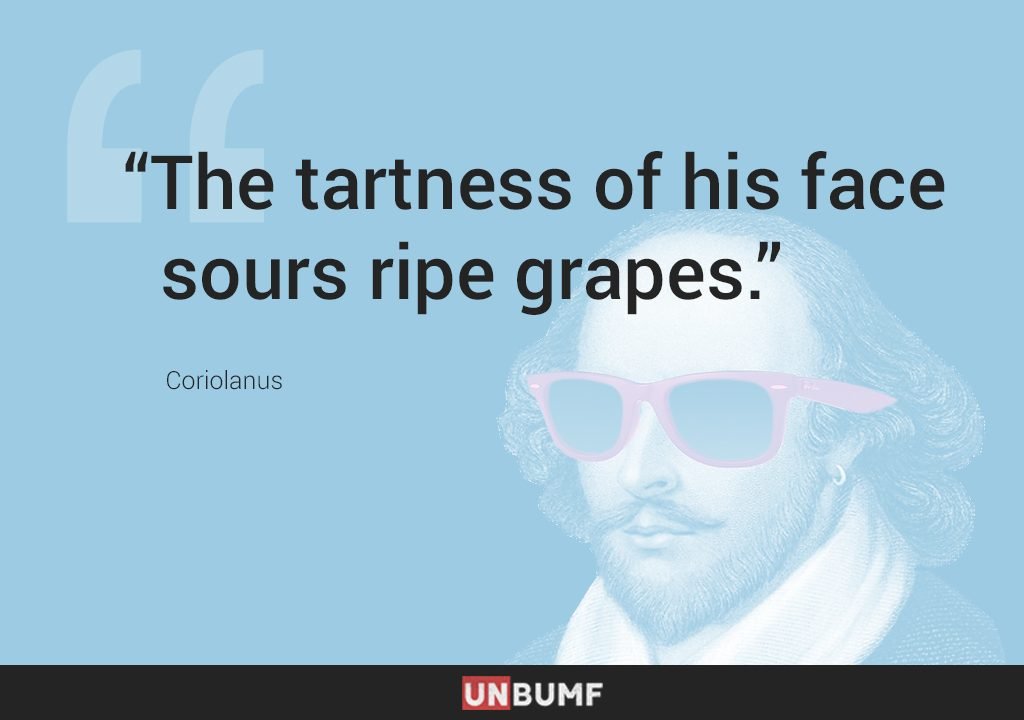 “The tartness of his face sours ripe grapes.”

“You common cry of curs, whose breath I hate, as reek o’ the rotten fens.” 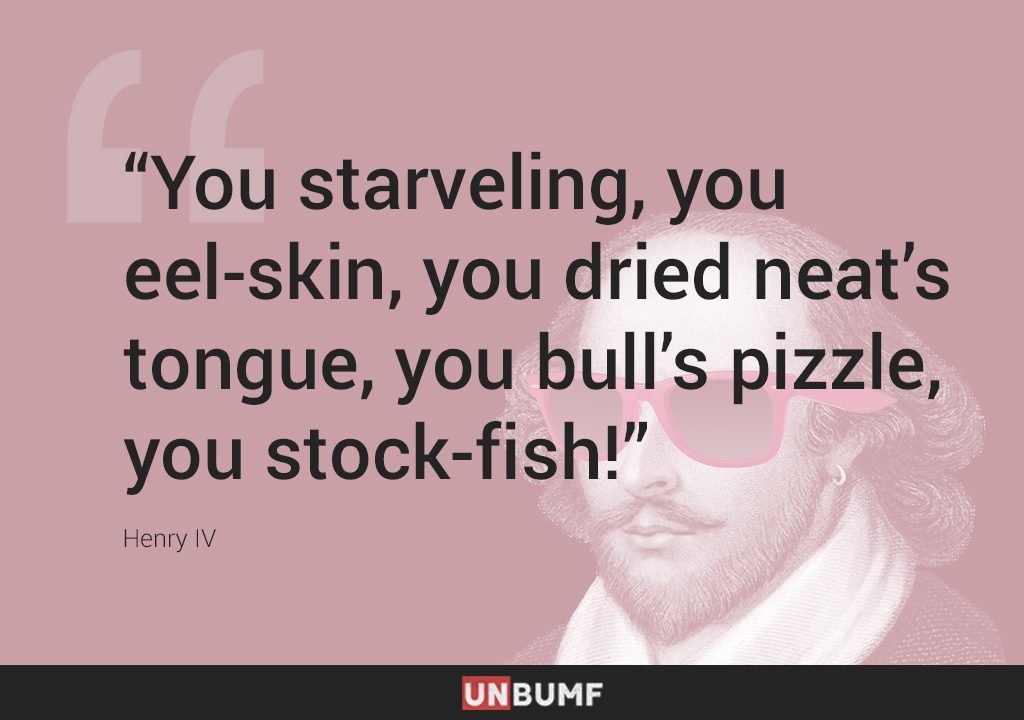 A fithy-rich vocabulary (pun intended) is just the right tool to take down your opponents.

“You starveling, you eel-skin, you dried neat’s tongue, you bull’s pizzle, you stock-fish!”

“I scorn you, scurvy companion.”

“You scullion! You fustilarian! I’ll tickle your catastrophe!”

But even the best have their days of repulsion with words:

“You basket-hilt stale juggler, you!”

“Thou art a natural coward without instinct.”

“Thou art as fat as butter.” 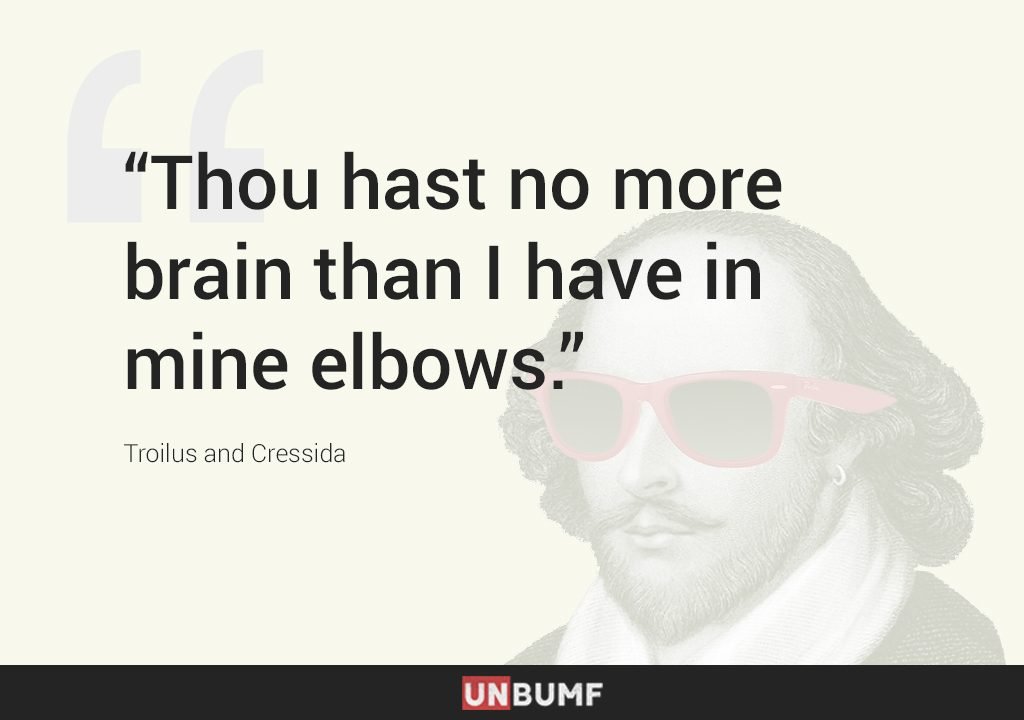 “Thou crusty batch of nature!”

“Thou hast no more brain than I have in mine elbows.”

Dole ’em insults out like grated cheese, am I right?

9. The Merry Wives of Windsor 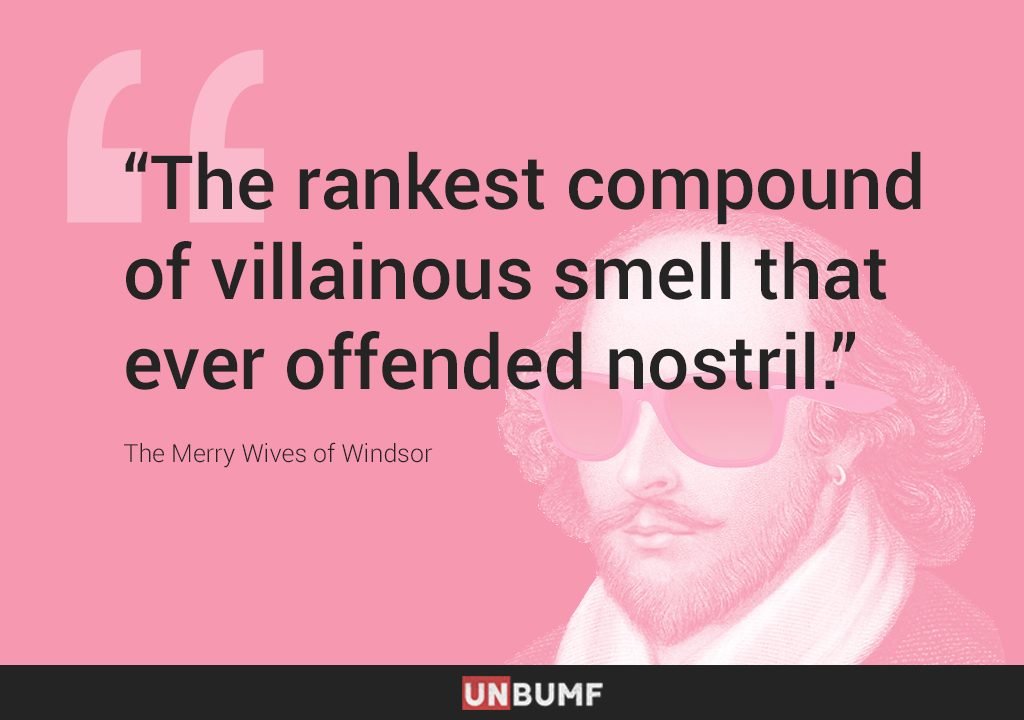 “The rankest compound of villainous smell that ever offended nostril.”

Because, honestly, the best insults come from chemical references. 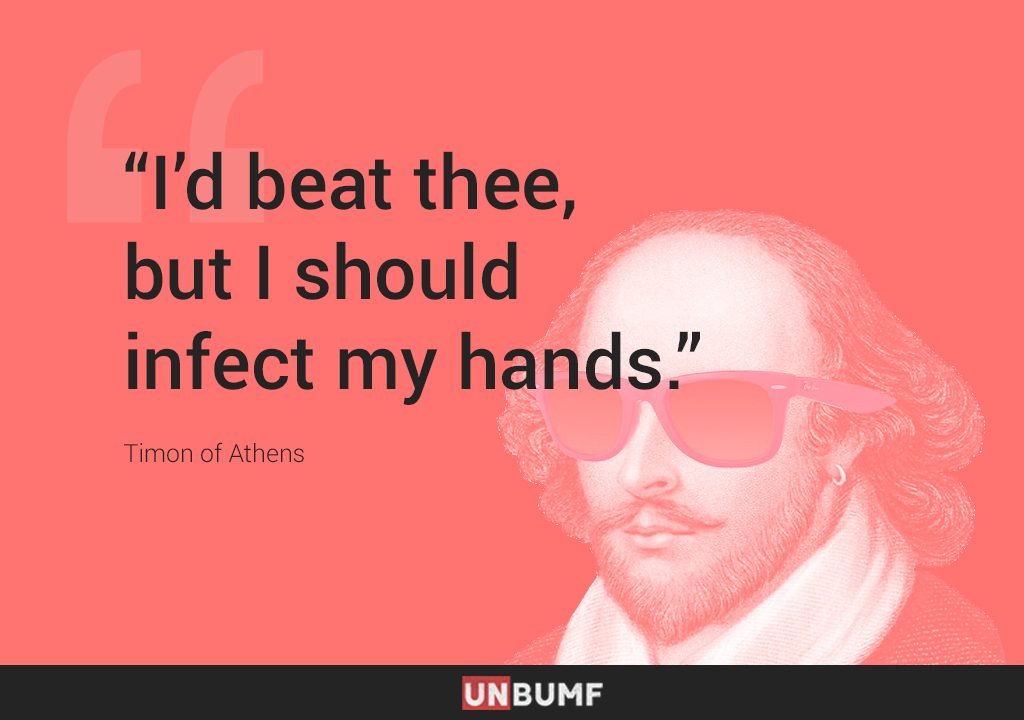 Although these sound like siblings fighting, they’d still make you take notes.

“I do wish thou were a dog, that I might love thee something.”

“I’d beat thee, but I should infect my hands.” 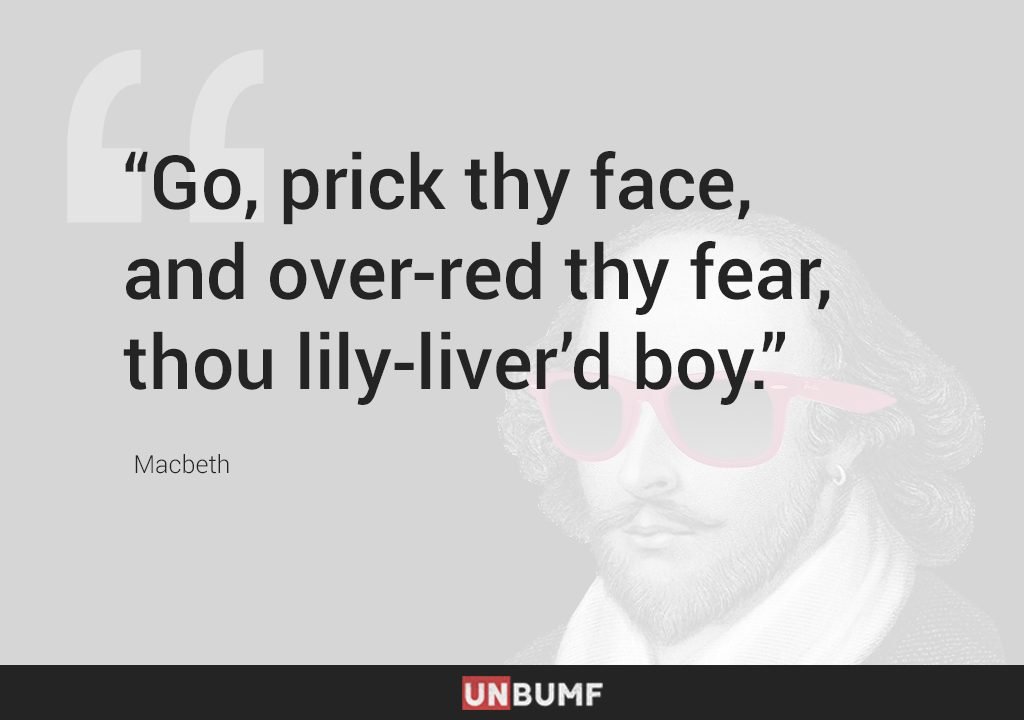 Because calling someone a coward no longer has the same impact.

“Go, prick thy face, and over-red thy fear, thou lily-liver’d boy.”

12. The Comedy of Errors 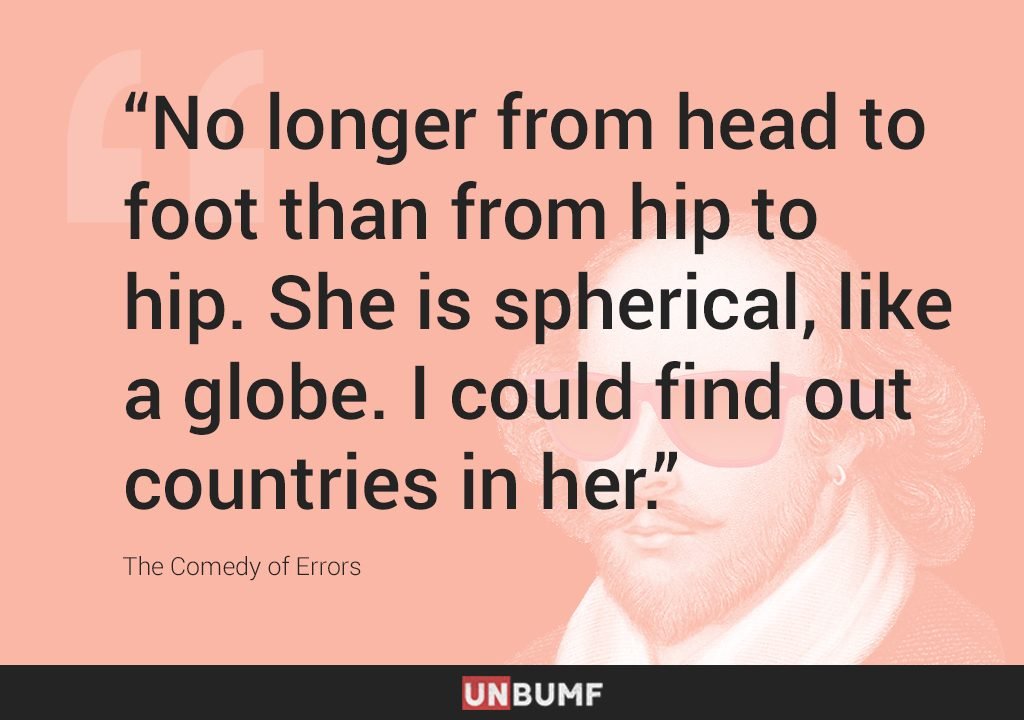 “No longer from head to foot than from hip to hip. She is spherical, like a globe. I could find out countries in her.”

Only comedy. No errors in this one. 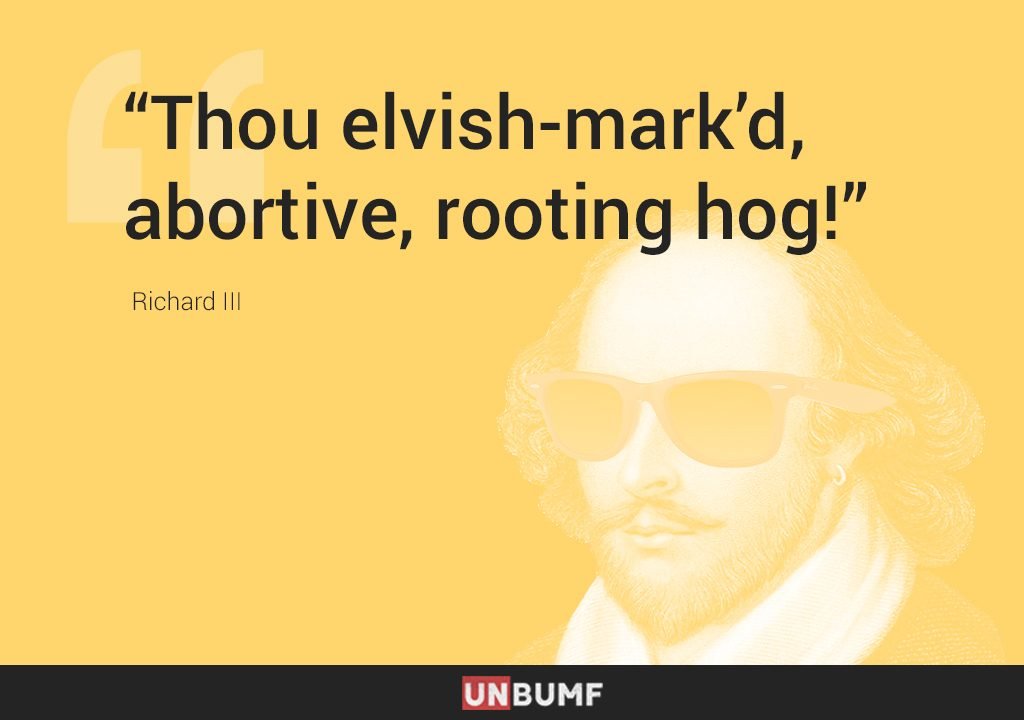 Like I said before, Shakespeare made the best adjective-noun parirings possible. 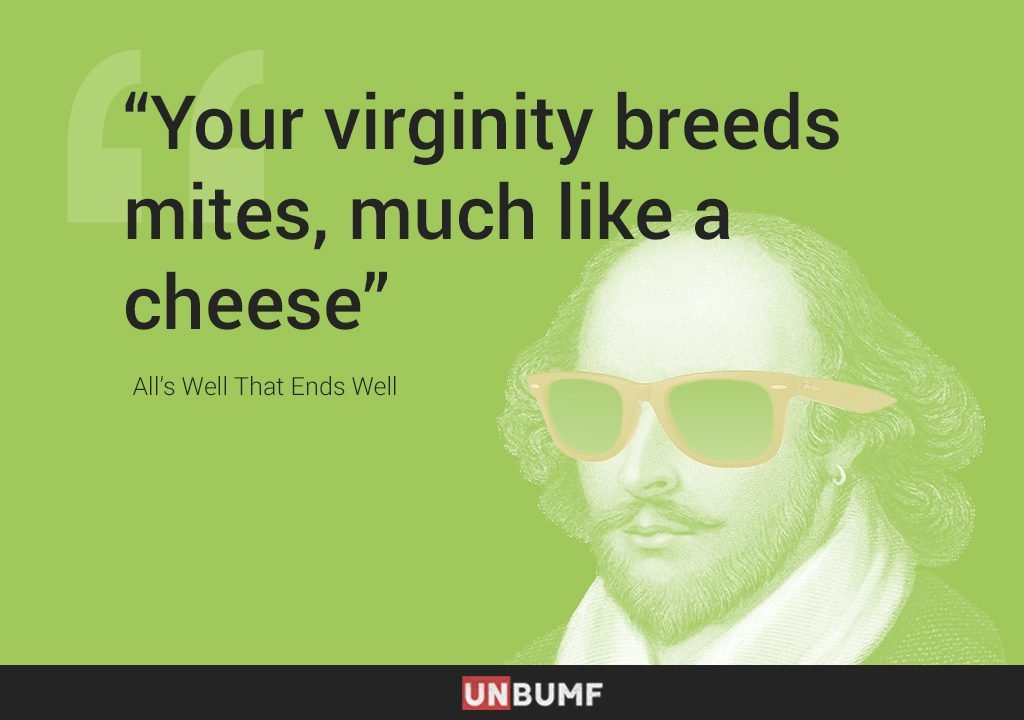 Not sure he wanted to sound this rude, but reading through these reams, it doesn’t look like he gives a damn.

So the next time someone frowns upon you for your indiscriminate use of expletives, just resort to Shakespeare!