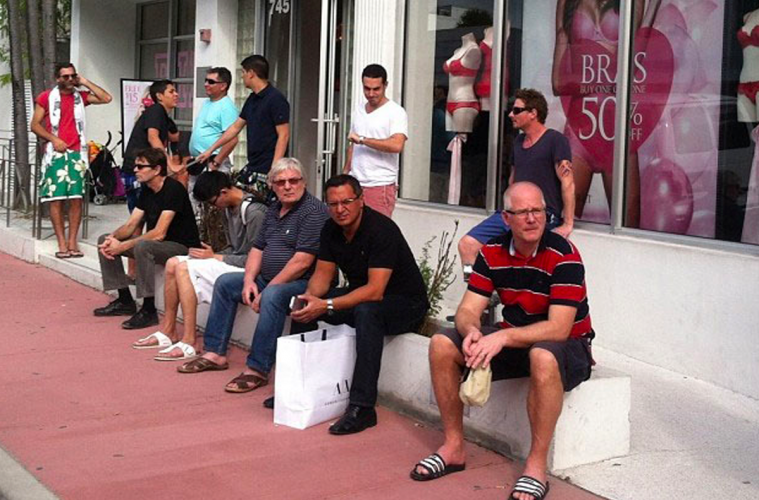 6 Kinds Of Men You Spot Outside Women Trial Room

Do you remember growing up and going for clothes shopping with your parents?

The small shops in the city lanes that used to be stacked to the brim with boxes that contained clothes in plastic wrap? How skillfully the shopkeeper opened the boxes and put the lid under the container and showed you all the clothes?

I do not even remember a label that I wanted to sport or a color that I picked out of a haystack until the shopkeeper showed it to me. But with the advent of the millennium and the rampant adoption of western culture, our country was also blessed with a more advanced system of shopping. With much fanfare and gusto, malls were introduced and thankfully we were all grown up by the time. Shopping had now become a pastime for many.

Well to be really honest, shopping is a pain for most people, save for the divas of Bollywood and her fan following. And when that shopping is for someone else, the pain amplifies much louder than the sound system of your flashy new car. Now whilst the same gender-based groups shopping experience are known to all; a cross gender shopping experience is completely different. Particularly the one in which the female is shopping.

Men can be found accompanying their significant other or yet to be significant other or a friend who is expecting to be the significant other in a long line of suitors. Men find it a genuine ordeal to wait outside the women’s changing room. Principally out of fear of being judged for whatever reason one can come up with or for the simple lack of interest. Men often end up doing some weird things outside while waiting for the women to try their dresses. Some categories are listed below: 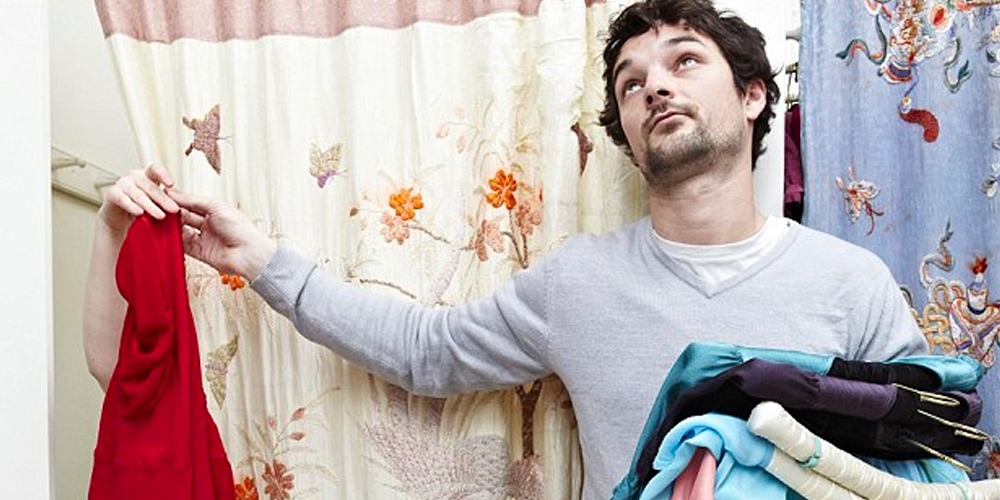 A normal human is blessed with two arms which one likes to keep free. But not this guy. His hands are full of clothes that are to be tried, are tried and may not be tried. His shoulder is proudly rocking the lady’s bag and probably his hand will adorn a pink or golden colored phone. Ergo: the human hangar.

Chances are, if this guy stands out of the changing room for a longer time, you might miss him entirely under the mount of clothes.

2. The one with the impatient kid 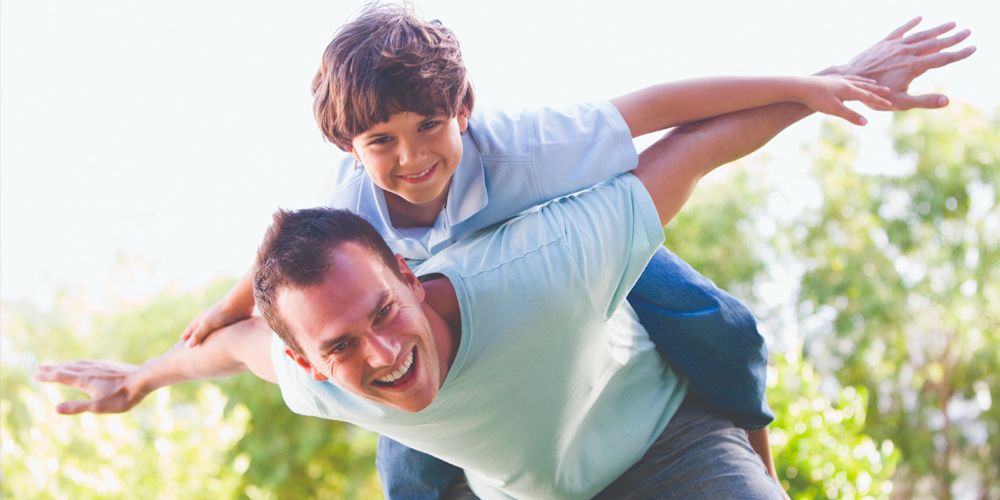 Shopping is difficult when you are alone and by yourself. You know, you need an opinion sometimes because the three mirrors inside are not sufficient to get all the angles. So, people bring people to tell them what the cloth looks like. The accompanying husband comes with their kid, who let’s face it is not at all interested in the mall whatsoever. He just wants to play around and run. And so, that’s just what he does. The husband is usually seen running behind the kid, doing ninja like maneuvers to avoid crashing into people.

He also tries to engross the kid with a false premise of ice cream afterwards if the kid behaves and it usually works for all of about 5 minutes.

Then its back to the ninja techniques. 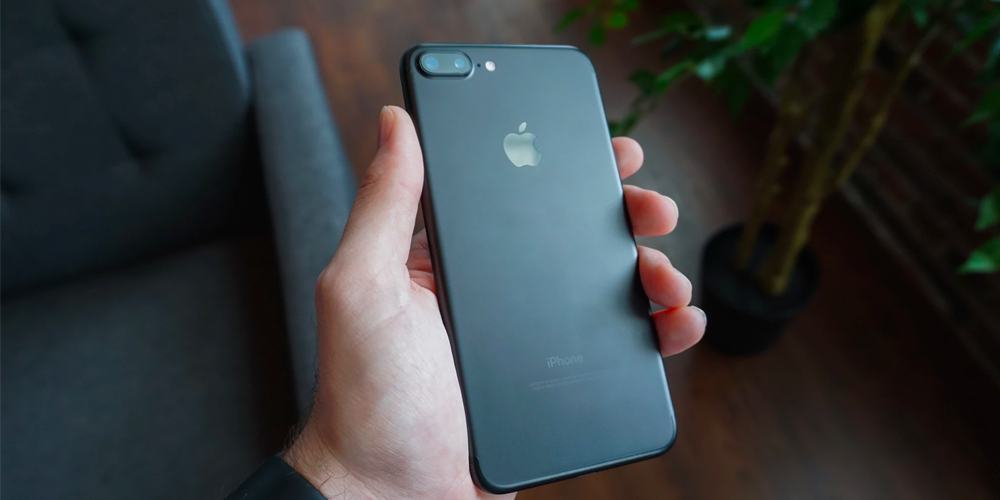 Remember the advert where a woman comes out of the changing room and asks her husband who is fully into his mobile about how she looks? And the husband replies “wide” because he was looking at the cricket commentary.

Yeah, this happens all too often.

The guy is completely lost into his phone; it could be a game he is playing or reading the news or just checking out old photos about how life was beautiful when he was outside the mall.

Pay attention man, the lady is about to get angry. The mobile might be hit out of the park for a six. 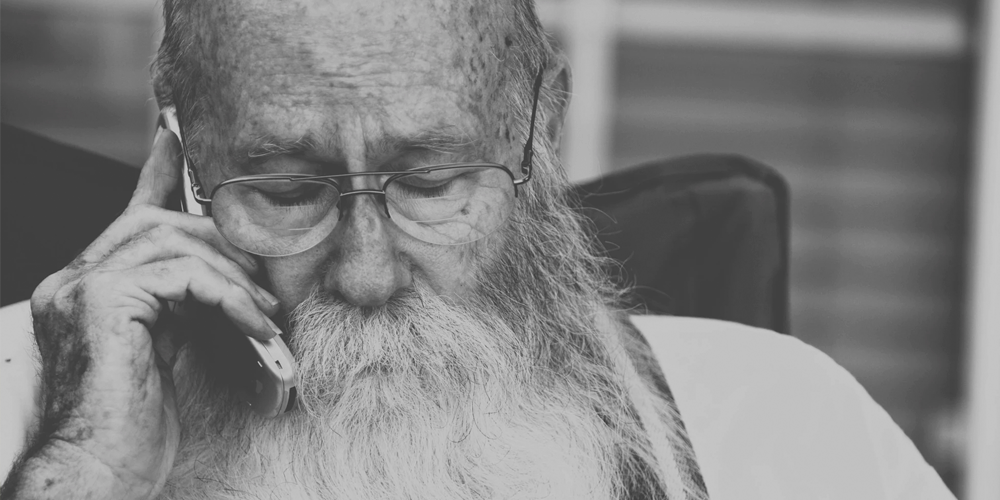 Now she is in the changing room. She is taking her time. Her own sweet time. You cant rush her, you remember how it ended last time you rushed her while shopping. No sir, sleeping on the couch is not for the weak hearted.

So our friend here starts talking on the phone to random people. Could be his boss who needed some buttering and pampering, could be a long lost friend that he was avoiding since long, heck it could even be the maid who didn’t turn up in the morning.

When no one picks up the call, they look around and sure enough spot fellow friends who are waiting too. They lose no time and chat up with the usual “Women huh !! Why do they need to shop so much?”

That alone is needed to break the ice between men. 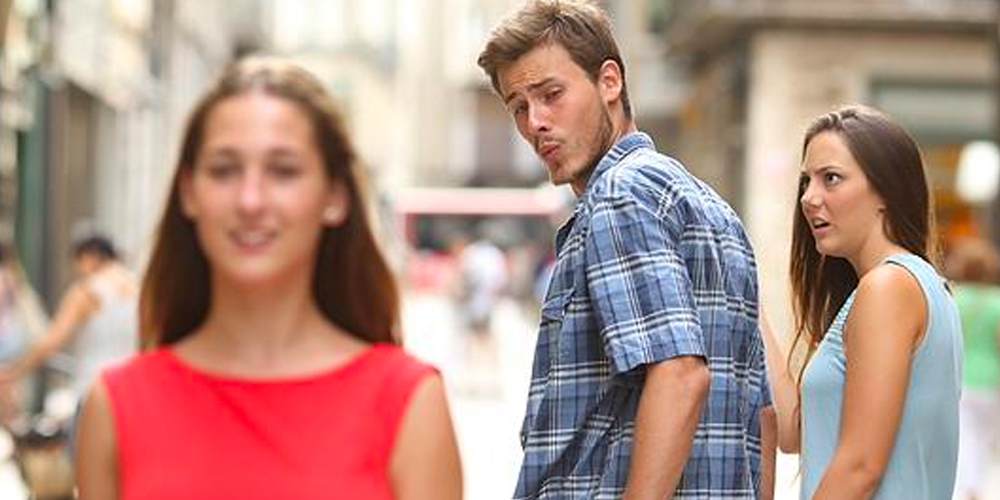 There is an old saying about how men irrespective of their age are ridiculously always gaping at other women. Remember the advert with the tagline “men will be men”.

They will wait outside the trial room and steal a quick glance at every female that walks by. The speed is so much that sometimes its difficult to tell. Approach the guy and ask him to do it in slow motion if feasible.  (Risk getting a slap I think, but would be fun to look at the expression on the face)

6. The one who actually cares about the look 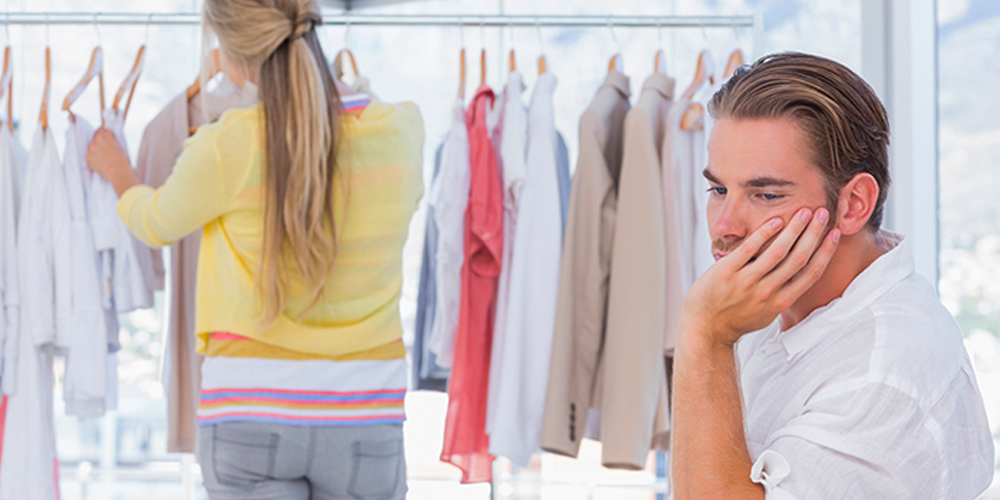 Its hard to admit but there is a rare category of men who actually care about what is being bought. They stand patiently outside the trial room and wait for the woman.

They have their own opinions (most of which are shot down) and they have a look in mind (which is mostly called ridiculous) but they still wait and offer solace.

Its maybe a rare breed of men who do exist.

Because after all, you are only going to look good if you look good together.