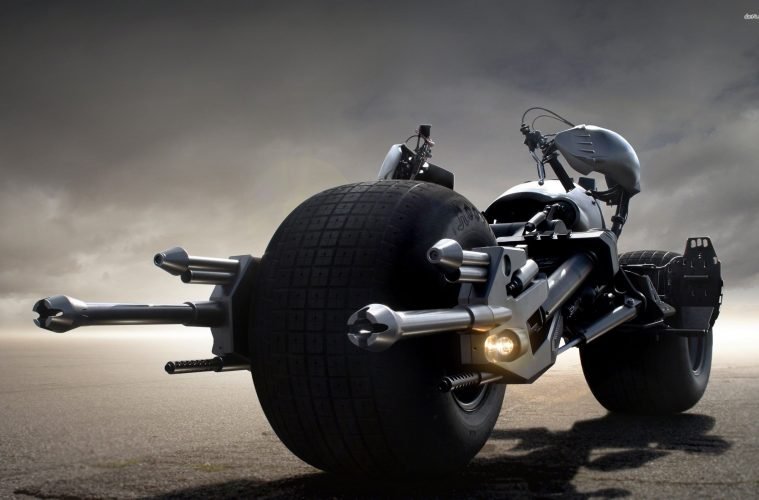 “You do not need a therapist if you own a motorcycle, any kind of motorcycle.”

Motorcycles are amazing, to say the least. There are many who swear by their rides and those who worship the ground these machines tread on. Driving one of them, while feeling the thrill of speed is an experience on its own. We forget our troubles as we find ourselves to be a part of the wind, down a seemingly endless road that takes us away from our problems.

Today, we’re going to speak about the bikes we wish we had. You can buy any bike you want, be it a sports bike, chopper, cruiser or a simple Splendor. This is assuming that you have a heavy and deep pocket and the willingness to maintain a vehicle. But there are certain bikes you wish you possessed. The vehicles that you have seen in a movie or in a cartoon or somewhere else. We have for you, therefore, a list of seven such vehicles that have been driven by our favourite characters.

(Keep in mind that this list isn’t exhausted and may be limited by the author’s knowledge of popular culture. Please cut the man some slack.) 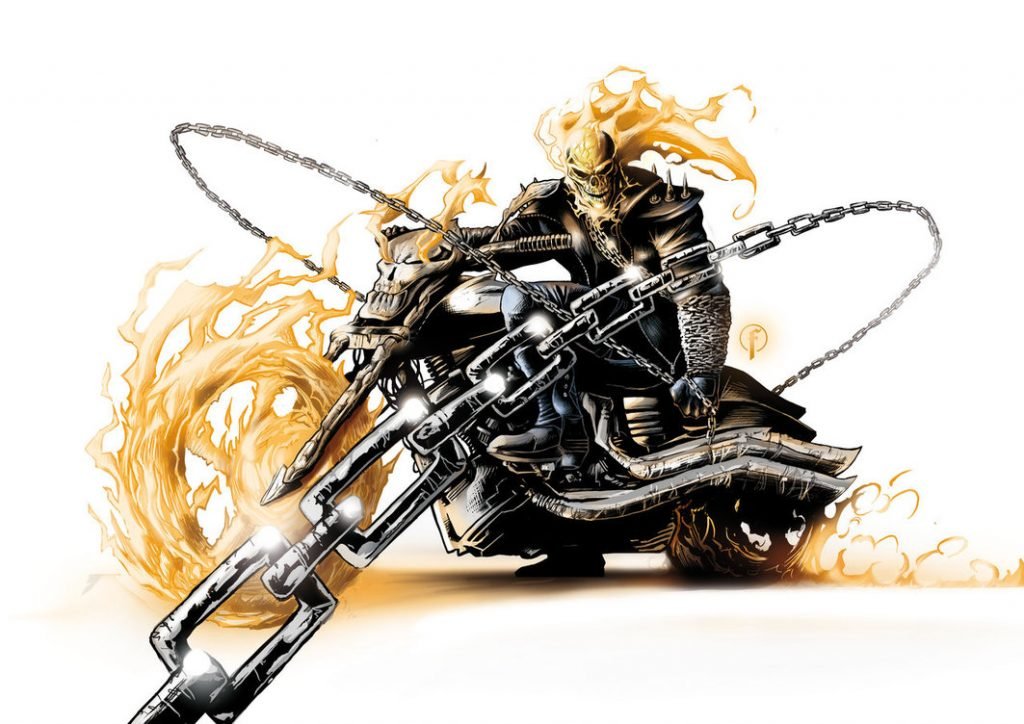 This maybe a category with more than one kind of bike. After all, the famed Ghost Rider mantle has been taken up by many people and many vehicles. However, there are fewer things cooler than a motorcycle with flaming wheels, hellish modification and an engine that runs solely on Hellfire. Add to that a figure with a flaming skull riding and brandishing an equally flaming chain, and you have one of the greatest bikers in the Marvel Comic Book Universe. Named as the ‘Hell Cycle’ it has been driven by many, including the likes of Danny Ketch and Johnny Blaze. Each has had his own bike but the name and features remain the same. This can surely be described as the flaming whirlpool of ultimate badassery. (Keep in mind that we’re ignoring the movie due to obvious reasons) 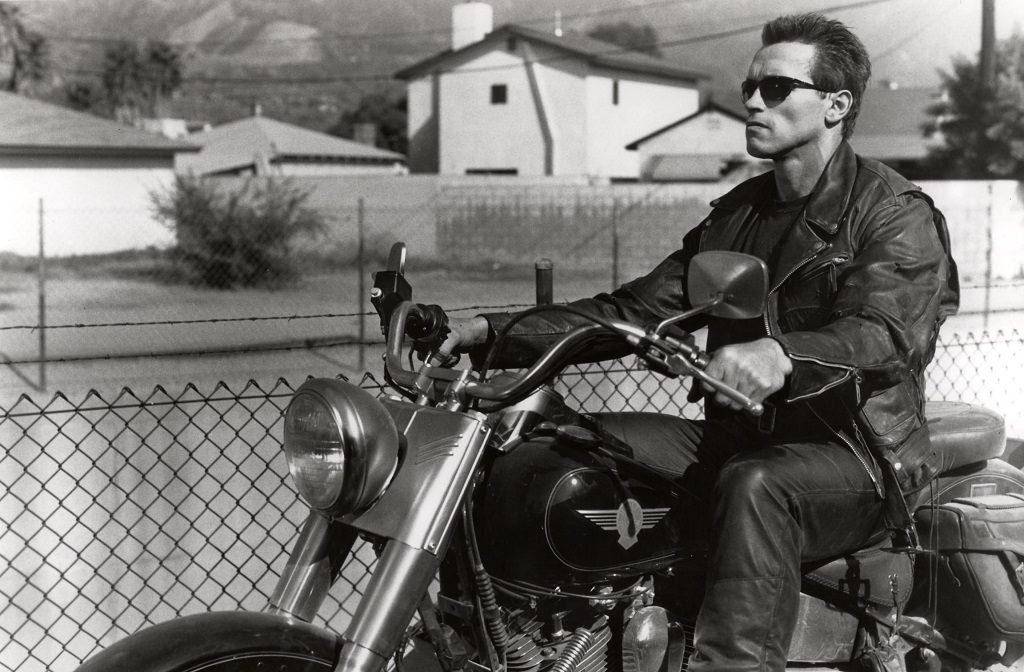 I don’t even need to explain this one. Tell me you didn’t scream yourselves hoarse when Arnold Schwarzenegger jumps into a storm drain on his 1990 Harley Davidson Fat Boy. It’s an interesting fact that the bike weighed around 300+ kgs and had to be assisted by cables to make the iconic jump. And that’s not even taking into account the weight of the man himself. It’s also worth noting that the name, ‘Fat Boy,’ originates from the names of one of the bombs that were dropped on Hiroshima and Nagasaki during WW II. (The more you know.)

The bike was part of an unforgettable car chase in the best Terminator movie and has been, since, inducted into the Harley Davidson museum in Milwaukee. Let’s hope that, one day, it’ll be back. (Eh? Eh?) 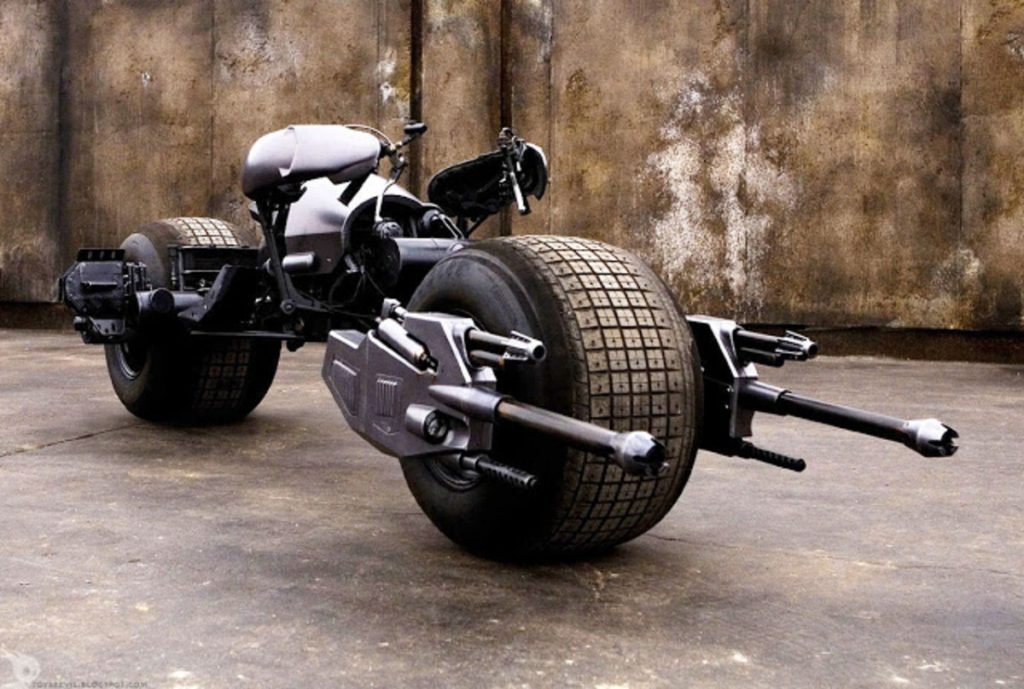 The Dark Knight trilogy will go down as one of the most iconic incarnations of the Caped Crusader and the vehicles are just one of the reasons for that. The Tumbler was awesome, yes, but how many can forget the Bat-Pod flipping the truck in The Dark Knight. It was spellbinding and served to etch the two wheeled wonder deep into our memories. Six models were built for the film and most of them are actual and fully functional motorcycles capable of actual road travel.  Like in the movie, you could even steer the shoulders instead of your arms. You will be hard pressed to get one though, so don’t your hopes up.

Tron: Legacy served as a sequel to the 1980s science fiction classic and to say it was lackluster would probably be an understatement. On the other hand, it is hard to deny that it was hard to ignore the beautiful visuals of the movie. One highlight of that was the Light Cycle, the bike that appeared magically out of a stick. To see why it is ranked 4 on our list, just check out the picture. No other words are necessary. Watching the yellow and blue light cycles destroy each other in their wake (literally) made for magnificent entertainment and was, unfortunately, the best part of the movie. 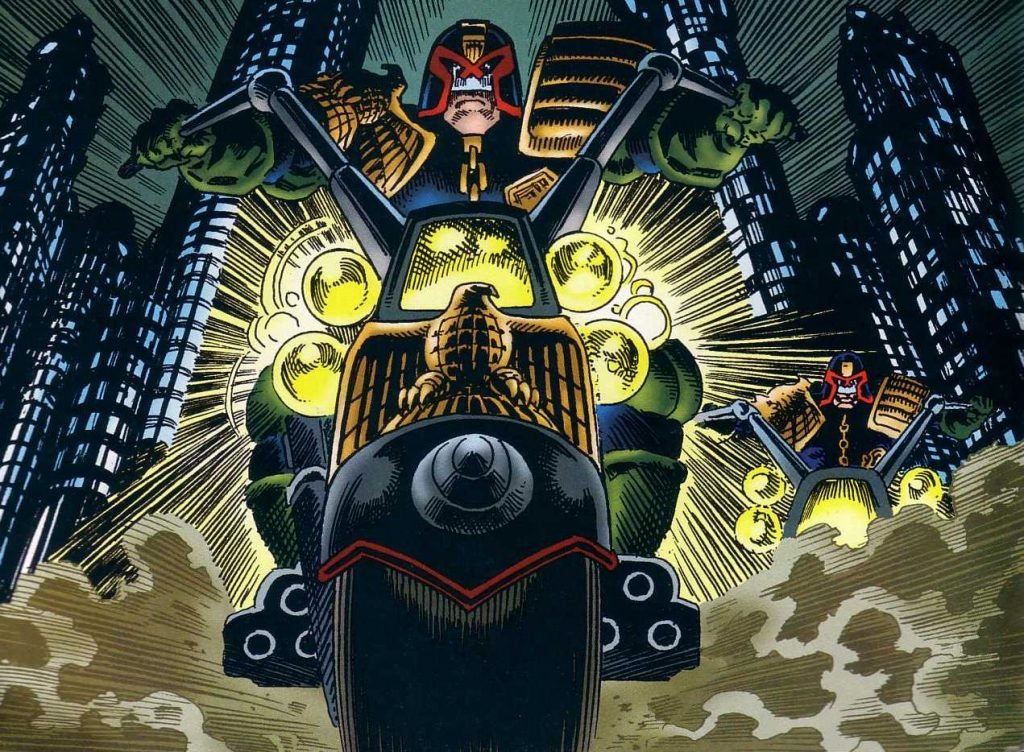 If you haven’t heard of Judge Dredd then you need to pick up one of his comics RIGHT NOW. The dystopian setting and the concept of an elite force of people being judge, jury and executioners is brilliant and riveting. The monstrous vehicle ridden by the Judge himself and  the helmet that never comes off. Its name, Lawmaster, should be enough to send shivers down any criminal’s spine. Lawmaster is equipped with artificial intelligence, crowd control measures, weapon capabilities, an uplink with The Grand Hall of Justice (seriously, read the comics) and crime scene investigation capabilities. It looks pretty damn beastly too. 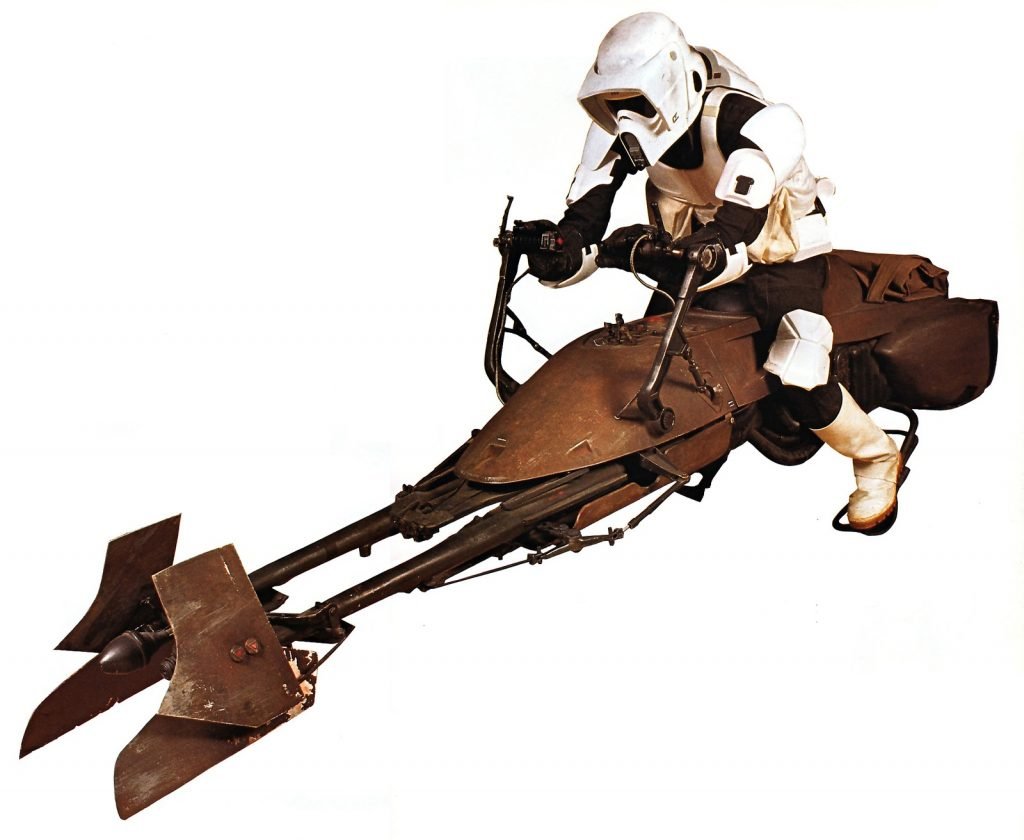 I don’t even need to tell you how awesome this one is. I mean, seriously, look at it. Appearing initially in Return of the Jedi, this thing doesn’t even have wheels. It is basically a bike that hovers over the ground and, if the technology existed, would have made a fine collection to any biker’s collection. Imagine yourself zooming along the highway on this beauty and you will have stumbled upon the fantasy of millions of Americans who grew up watching Star Wars. 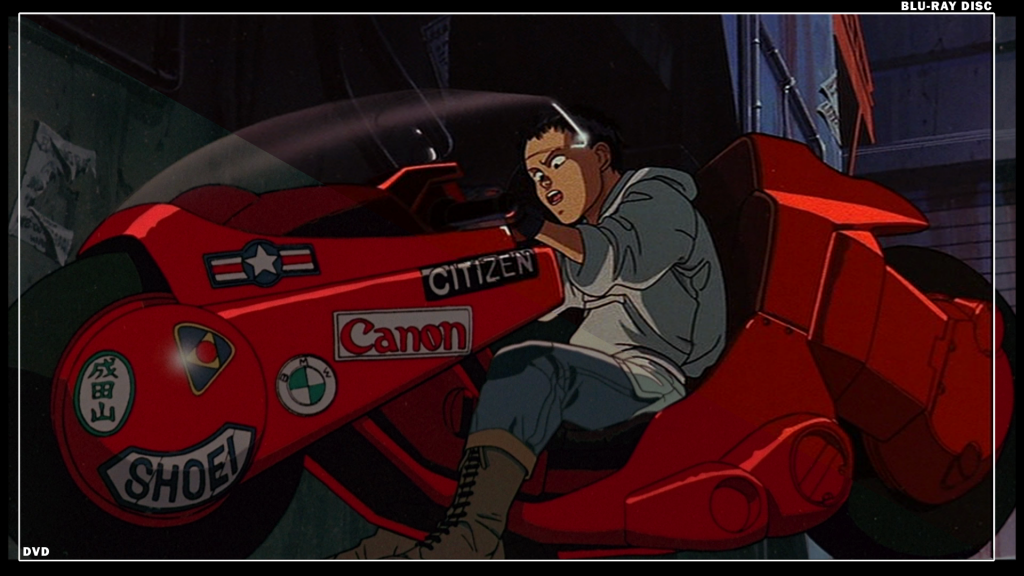 If you have seen Akira and didn’t rewind the first time you saw the opening action sequence then have you even watched the film? Shotaro Kaneda’s red masterpiece is a thing of beauty and if the movie is anything to go by, it rides like an absolute charm. The bike’s make and model aren’t entirely clear. Although, a symbol closely resembling BMW has been observed by some hawk eyed fans. It has a reverse function and for the bike freaks, it comes equipped with a ceramic, double rotor and two wheel disk drive. I don’t know what that means, but it sounds wicked. 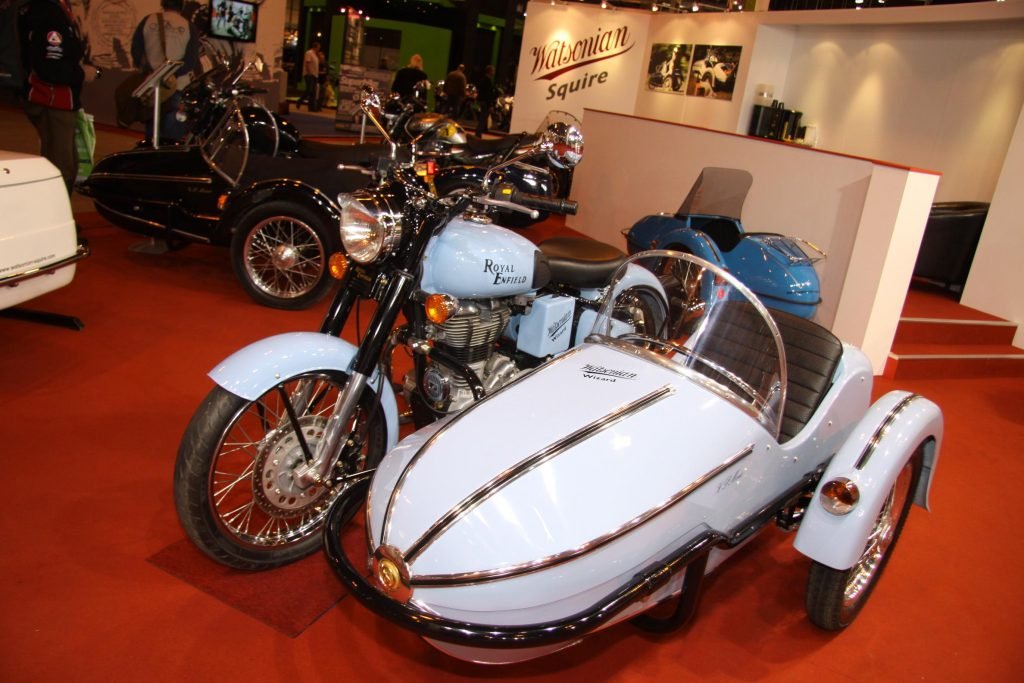 Hagrid is one of the most popular characters of the Harry Potter series. It makes for an endearing image to imagine atop Sirius Black’s motorcycle. Hagrid’s bike was the bike that started it all. ‘The Boy Who Lived’ was delivered to the Dursleys’ doorstep on this bike. Seven years later, when Hagrid took Harry away on the same vehicle and completed the cycle, the image of the flying bike was printed in our memories. It’s unclear what the make or model was, although the film used a 1959 Triumph 650 T-120 Bonneville.

This is a list of some of the greatest motorcycles in fiction. If I’ve missed some, please be happy, instead of mad. Why is that? Well, because, if that’s true then it means that there are still fictional worlds that I have to visit. You know what they, ‘a world undiscovered is an adventure waiting to happen.’

Now, if only I had a vehicle to venture into this unknown world…