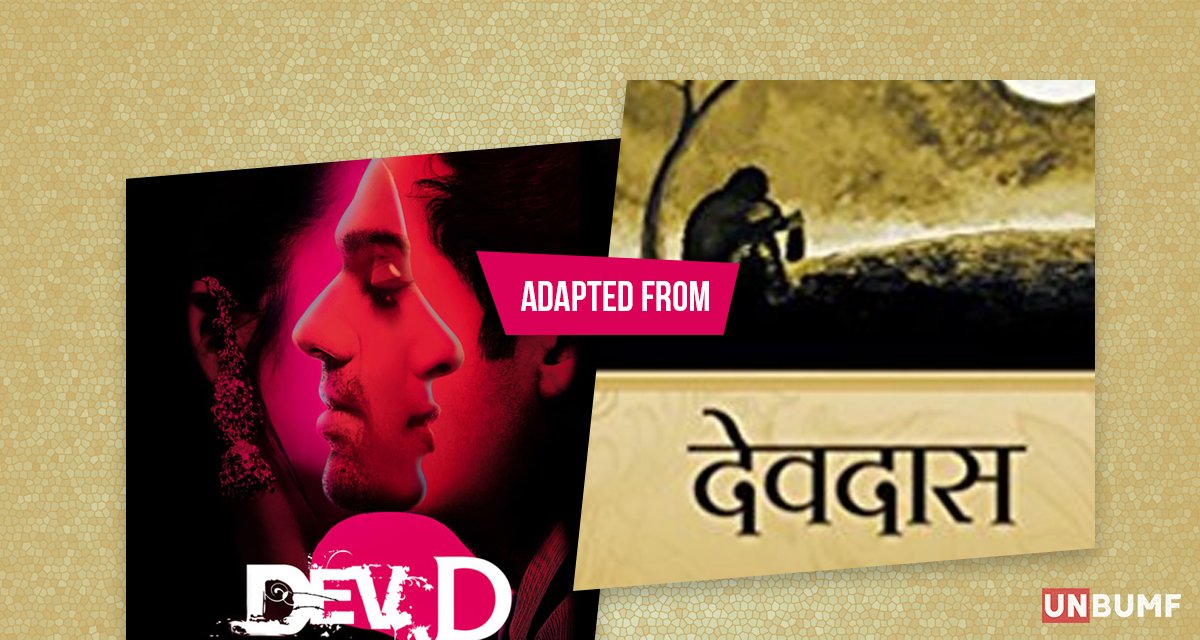 7 Times Bollywood Got Its Literature Right

When it comes to adapting literature to the silver screen, movies seldom do justice to novels they are based upon. However there are few which proved to be exceptions. Good adaptations are more than just copies of the book. They are filmmaker’s interpretation of what an author has portrayed. We bring you our list of the seven bollywood movies which are adaptations from books.

1. Haider based on Hamlet by William Shakespeare 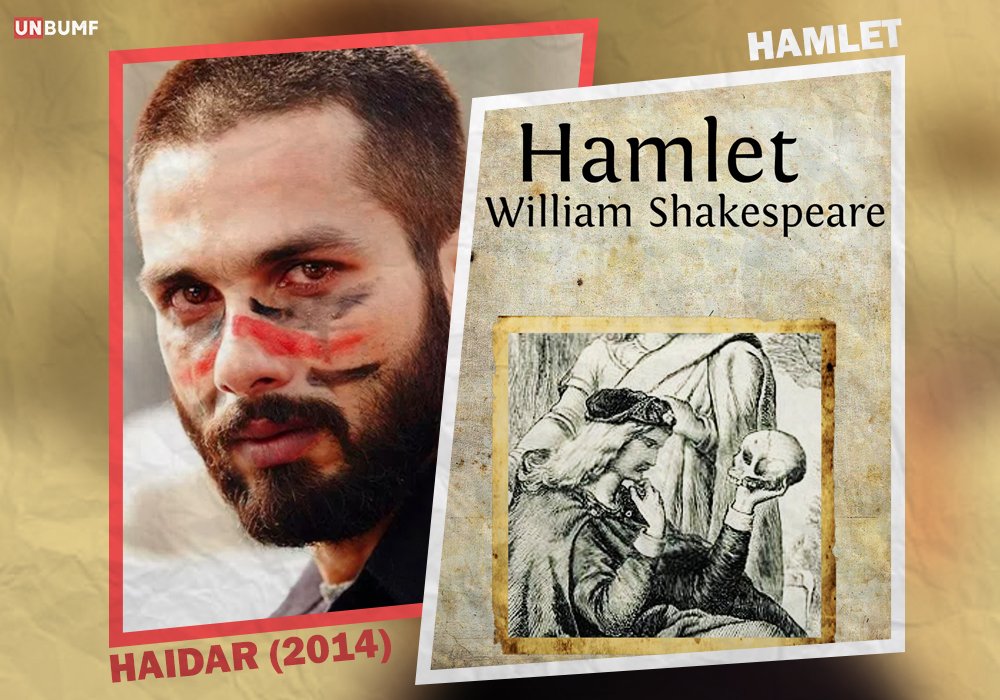 Hamlet is one of the most famous Shakespearian tragedies. It is the story of the troubled prince named Hamlet, who slowly loses his mind after seeing his father’s ghost. Prince Hamlet feels betrayed after his newly widowed mother, Gertrude, marries his uncle, Claudius, thus making him the heir to the throne. Meanwhile, Hamlet encounters his dead father’s ghost. The ghost informs him that he was in fact murdered by Claudius. Hamlet sets on the path of avenging his father’s murder. The play chronicles Hamlet’s descent into the downward spiral of insanity.

Hamlet was adapted into a movie by Vishal Bharadwaj. Set in Kashmir, the movie revolves around Haider (Shahid Kapoor). Troubled by his father’s disappearance and mother’s betrayal, Haider gradually loses his mind in a myriad of emotions. Shahid has wonderfully portrayed these emotions. Bhardwaj adds his own twist to Hamlet’s most famous soliloquy, “To be or not to be” when it is said in light of the people of Kashmir. Delivering powerhouse performances by each one of its actors. From Tabu to Kay Kay Menon and Irrfan Khan, the movie is one that tops our list.

2. Lootera based on The Last Leaf by O. Henry 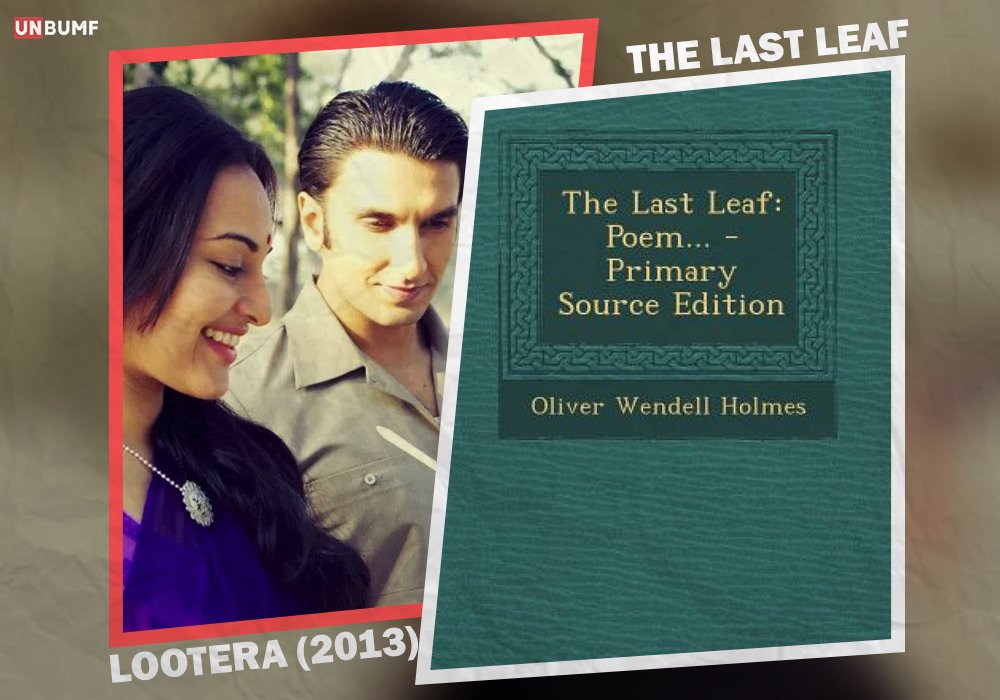 ‘The Last Leaf‘ is one of the most popular short stories penned by O. Henry. Set in Greenwich village, a young artist (Johnsy) lays on her deathbed, suffering from pneumonia. In the flat below hers, lives another artist. He is an eccentric old man who promises everyone that one day he will produce a masterpiece. Pneumonia slowly eats Johnsy away. She decides that as the last leaf on the decaying vine visible from her window falls, so will she. The leaf holds stubbornly on through the storm and Johnsy gets her will to live back. It is later revealed that the last leaf on the vine had been painted by the old man – his masterpiece. However due to staying out all night in the storm, he succumbs to pneumonia and dies.

Vikramaditya Motwane’s Lootera is set in the West Bengal of early 1950s. Ranvir Singh, playing a con man, enters the house of a wealthy zamindar in order to steal his valuables. As fate would have it, he ends up falling in love with his daughter (Sonakshi Sinha). Although the original story was not a love story, the plot more or less remains the same. The movie has brilliant screenplay and even better music, which is why it stands second on our list.

3. Omkara based on Othello by William Shakespeare 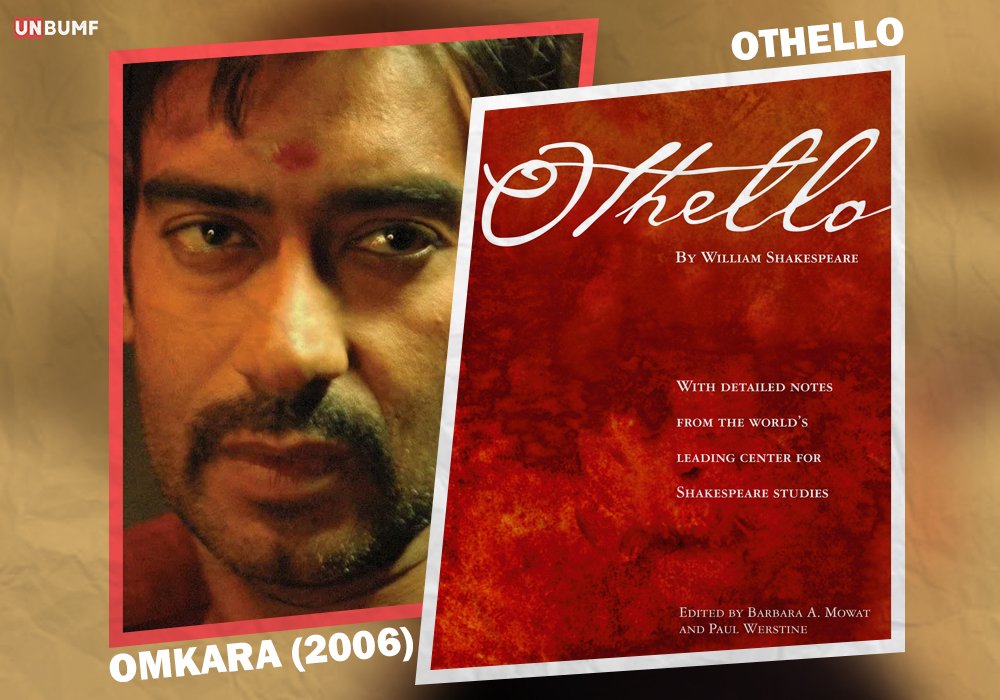 Othello is a tale of love and betrayal which is set in 16th Century Venice. Othello, the moor of Venice, is presented as the protagonist. Iago, Othello’s second in command, feels betrayed by the moor’s decision to promote Cassio, a younger man above him. He plots his revenge against both by making Othello believe that Desdemona, the love of his life, is committing adultery with Cassio. Othello kills Desdemona. Later, on realizing his folly, he kills himself too.

The version by Vishal Bhardwaj featuring Ajay Devgan as Othello (Omkara) was set in UP. Omkara sticks close to its root in the storyline with brilliant performances each by Kareena Kapoor, Ajay Devgan, Konkona SenSharma and Deepak Dobriyal. However, it is Saif Ali Khan who delivers splendid performance as Langda Tyaagi. He poisons Omkara’s mind against Dolly (Desdemona) and Kesu (Cassio). The movie, however, is definitely not to be watched with children. 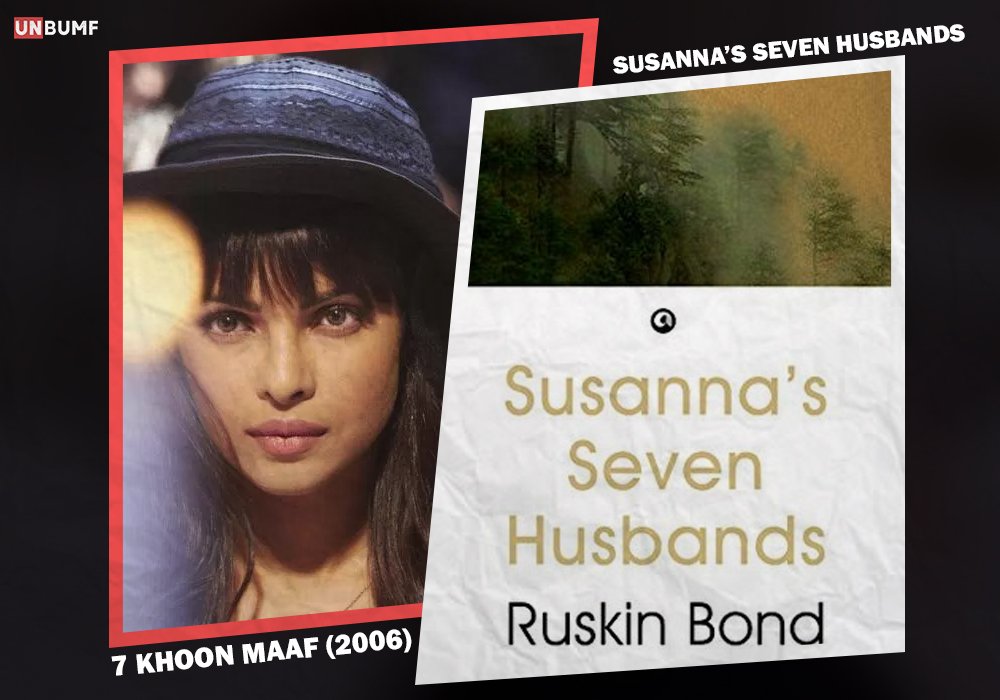 In the short story by Ruskin Bond, Suzannah is an orphan. She marries seven men, one after another, as each keeps dying under mysterious circumstances. Throughout the tale, you cannot help but feel sorry for the “poor” widow as she is failed by each one of her husbands.

Ruskin Bond’s short story came to life with Priyanka Chopra playing Susanna. Though remarkably dark, the movie does not lose pace even for a second. It moves from one husband to the next, much like the protagonist. Garnering brilliant performances from stalwarts like Naseeruddin Shah, Irrfan Khan and Anu Kapoor, the movie is one of Priyanka’s best performances till date. If you think you are seeing Vishal Bharawaj’s name a little too much in this list, that’s probably because adaptations are his forte.

5. Guide based on Guide by R.K. Narayan 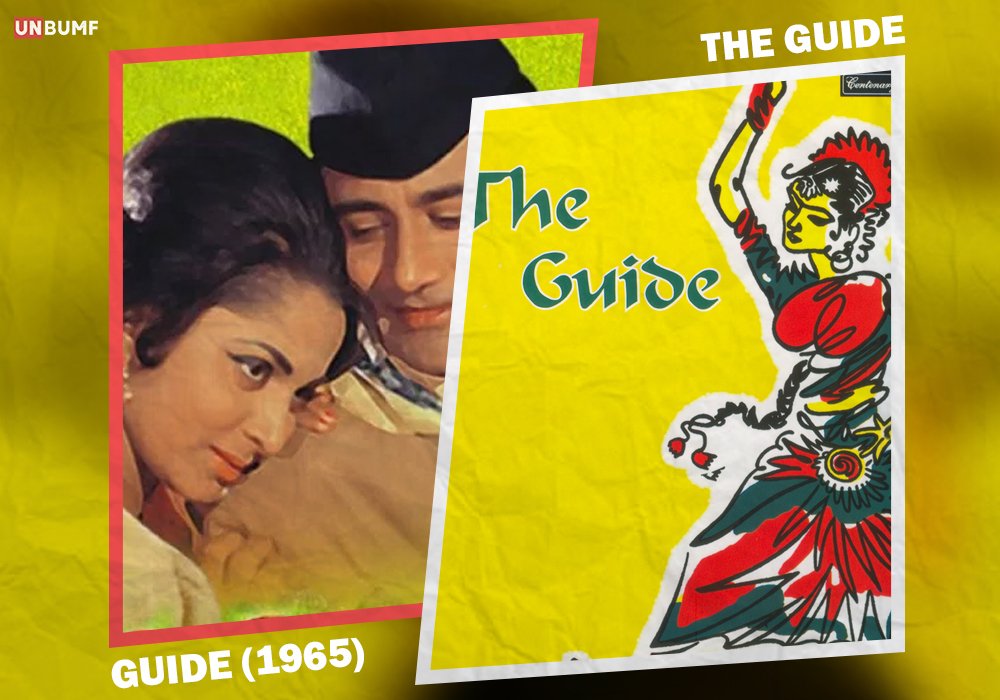 Like most of R. K. Narayan’s stories, this one is also set in the fictional town of Malgudi. Raju, an honest tourist guide, falls in love with Rosy. Rosy is a courtesan’s daughter who is neglected by her husband. Rosy and Raju start living together and the former gets back to dancing, with the latter acting as her manager. Raju gradually becomes more greedy and gets sentenced to two years of imprisonment. Later, Raju enters a village assuming the identity of an ascetic and attains the stature of a holy man. The story ends with Raju fasting to death so as to rid the village of a drought.

Dev Anand steals our hearts with ease through the character of Raju. Raju falls for Rosie (Waheeda Rehman/Rosy). The bond between the two deepens when Raju prevents Rosy from committing suicide. Instead, he encourages her to follow her dreams and become a dancer. The movie beautifully captures a huge range of human emotions, from one’s true love to the other’s utter selfishness. The cherry on the pie is the movie’s music, with classics like “aaj phir jeene ki tamanna hai”.

6. Devdas  based on Devdas by Sarat Chandra Chattopadhyay 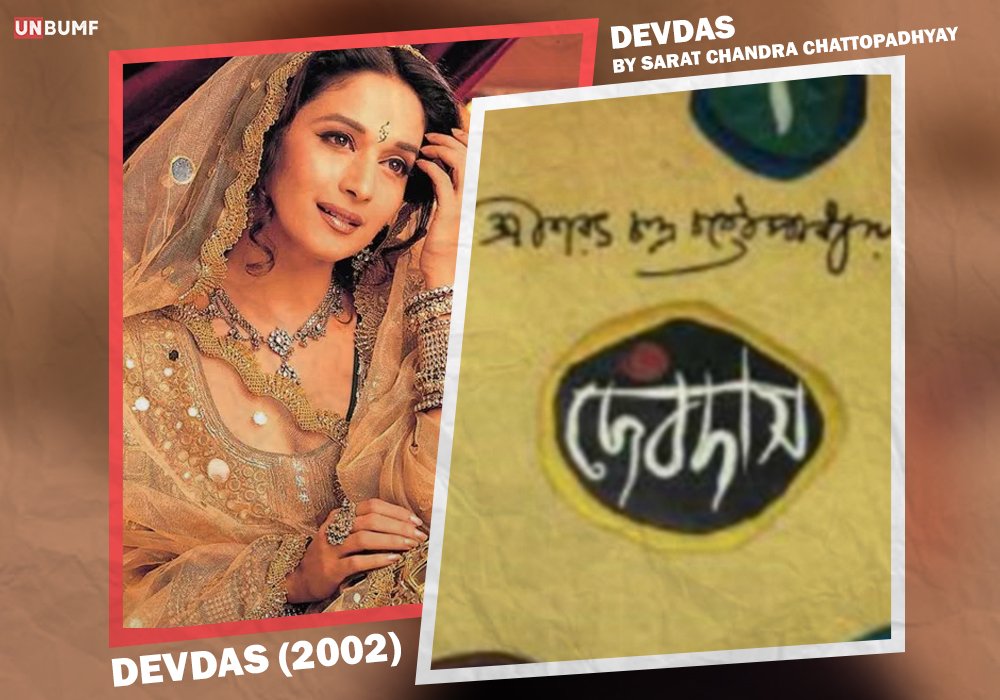 One of the most widely adapted stories in Bollywood, Devdas was written in Bangali by Sarat Chandra Chattopadhyay at the mere age of seventeen. Set in Calcutta, it is the story of Devdas and Parvati. They are childhood friends whose friendship blossoms into love. Trouble, however, comes in the form of Devdas’s family who insults Parvati’s mother when she tries to make a match between the two. Enraged by this, Parvati’s mother marries her off to a rich widower. Devdas spirals into alcoholism and meets Chandramukhi, a courtesan. Chandramukhi sees the heartbroken man behind the bitter alcoholic. Sole purpose of Chandramukhi in this story is to nurse Devdas back to health. The book ends with Devdas breathing his last at the threshold of Parvati’s house.

Devdas has been adapted many times for the silver screen in Hindi, Bengali, Urdu and even Malayalam. Most of us remember the version made by Sanjay Leela Bhansali with extravagant sets. Aishwarya Rai as Paro and Madhuri Dixit as Chandramukhi were perfect fits. It was, however, Shah Rukh Khan who stole our hearts with his eyes full of sorrow.

My personal favourite adaptation of Devdas however is Anurag Kashyap’s Dev D. Set in a contemporary backdrop, it is a modern day story of Devdas portrayed by Abhay Deol. Dev, played by Abhay Deol turns to drugs and vodka after a misunderstanding with his love interest Paro. He then meets Chanda, a prostitute with a whole set of problems of her own. He starts liking her but his self destruction mode prevents him to get too close to Chanda. The movie Dev D stands out due to spectacular performances by each character, seamless direction, gripping plot and brilliant soundtrack. 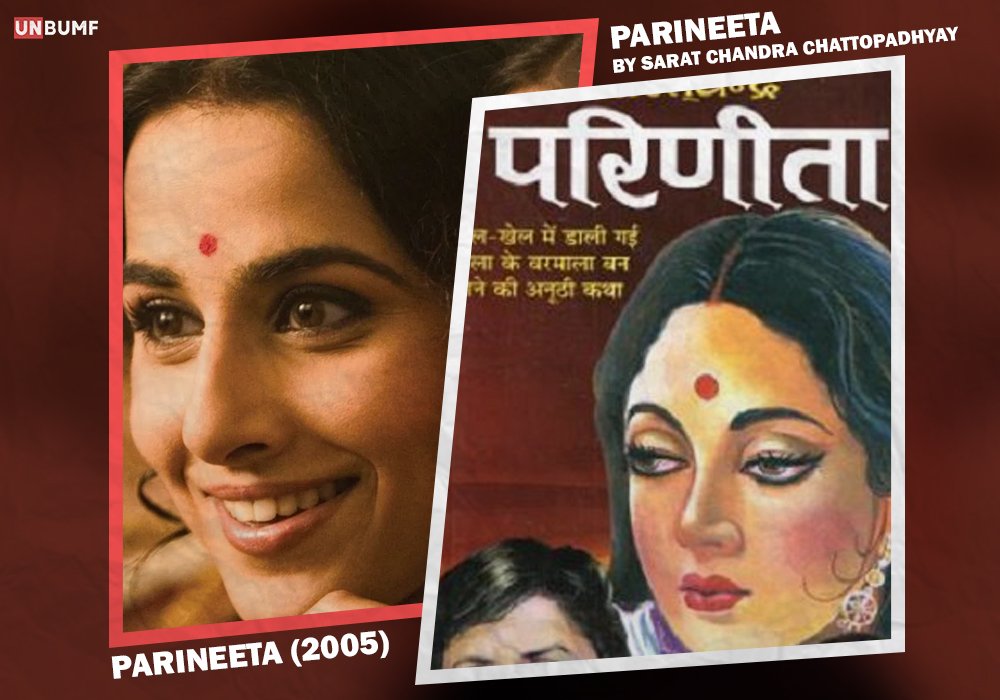 Much like Devdas, Paarineeta is also set in 20th Century Calcutta. Lalita, an orphan, is adopted by her Uncle. Next to them live the Roys. Lalita soon develops a very cordial relationship with Nabin Roy’s wife and his son, Shekhar. Lalita and Shekhar share a relationship of easy banter and Lalita is utterly devoted to Shekhar. Enter Girin, who aids Lalita’s family in their time of financial crisis and promises Gurucharan that he will marry his daughter.

Shekhar gets increasingly jealous of Girin’s proximity to Lalita’s family. Seeing her gratitude towards Girin, Shekhar becomes hostile towards her. One night, the two exchange garlands and get married. However, Shekhar is afraid of facing social ridicule and keeps the marriage under wraps. Lalita moves away with her family and Shekhar assumes that she has married Girin. This doubt is finally dispelled by Girin himself. The story ends with Shekhar finally accepting his union with Lalita in front of the whole world.

The movie follows close at the heels of the book, retaining the charm of old world Calcutta. Vidya Balan is breathtaking as Lalita and Saif Ali Khan plays the possessive Shekhar. Sanjay Dutt is surprisingly good as the calm and mature Girish. We love the movie for its subtle bengali nuances as well as the music. Rekha takes the cake with her performance in the aptly titled club, “Moulin Rouge“.

Adapting a book into a movie may seem like an easy task. However, it takes herculean effort to keep the essence of the original text intact. One thing that is common between all of these movies is the distinct flavour that the directors have added to the adaptations. That’s all for this list, folks!