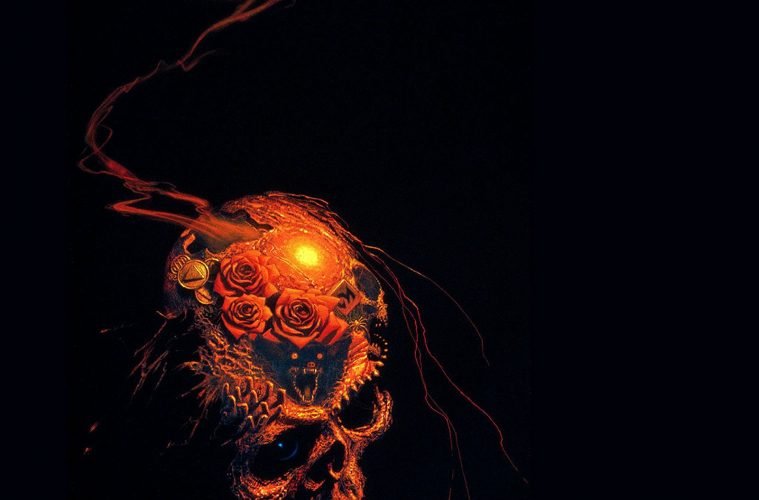 In the deep dark alleys of metal, thrives a genre, a genre so dark and true, that it came to be called Death Metal (drawing inference from the fact that death is the ultimate truth). To the callow inhabitants of this planet, a death metal concert is no different from mass exorcism, except with guitars, of course. Now I agree, that it does bear a resemblance but it takes a real metalhead to truly comprehend and appreciate the nitty gritties of the genre. As much as it might look like a bunch of white guys screaming and creating random noises, it is an art, an art that requires an altogether new level of dedication, passion, hard work and grit.

Death metal is probably one of the most complex forms of music. So consider this your lucky day, that we at Unbumf decided to educate the likes of you about death metal and introduce you the top the top Death Metal bands. So, read on.

To say the least, Opeth is genius. Opeth is Progressive Death. It features everything, from destructive guitar shredding to soothing acoustic arpeggios. From intense growling to pitch perfect clean vocals. From machine guns on the double bass to the more groovy beats.

Formed in 1989, Opeth is a Swedish band which has experienced probably every type of musical transition. The band might have undergone several transitions however, the quality of music has never degraded. Opeth began with death metal and in the later phase incorporated jazz, soft rock, punk and metal as well. Opeth still remains as one of the best death metal bands!

Deriving its name from the infamous Lake Bodom in Finland, Children of Bodom is a melodic death band. What intrigues me the most about this band is the fact that its name is as wild and mysterious as its music. Being melodic death, their songs and overtones are melodic even after being slightly tilted towards the death metal scene. Every time I die is a song to literally drool over. It can give you a wild rush in the gut. All I can say to people who have heard their compositions is “Stay wild moon child” and those who haven’t “what are you waiting for?!”

Probably and definitely one of the most interesting bands is Amon Amarth. It is a Swedish band found in 1992. With lyrical themes dealing with Viking mythology and paganism, Amon Amarth is best known for inculcating Viking mythology and giving it a new and cutting edge. Deriving its name from a J.R.R. Tolkien’s Middle-earth, Amon Amarth can completely leave you amused with its wit and prowess in the use of soul-crushing rhythms. However, Amon Amarth is melodic death metal. So, with a gore exterior comes a little melody into the tunes. Guardians of Asgaard is a personal favorite.

Formed in Liverpool in 1985, Carcass broke up in 1996 and then reformed again in 2007. Heartwork is probably the best that they’ve come up with as of now. Carcass used morbid imagery and gruesome tunes to make most of their songs. Lyrics are beautiful and deathly just like a proper death metal band should be. Carcass has outshone a number of bands. It exhibits every sort of dark imagery there can be possible. Michael Amott and Bill Steer are probably blessed by the devil himself! What makes Carcass different is their fantastic drumming. They literally drummed their way ahead!

A personal favourite, Deicide is one of the most beautiful death metal bands there ever can be. Glen Benton, the lead vocalist, and bassist was the powerhouse of this American band. The extremely blasphemous and satanic lyrics resulted in the band being banned in various countries.

The only problem that this bestselling band faced was that of generic and repetitive lyrics. However, they completely deserve the love that they get. This band is what defines pure death metal. Dead but dreaming!

Morbid Angel is one band you cannot imagine death metal without. It was formed in 1983 by Trey Azagthot, the only surviving member of the band now. Legend has it that Morbid Angel named its album in alphabetical orders! Their best work till date continues to remain covenant. However, this band is pretty infamous as well.

For a long while, it was considered as a gateway to drugs. Their musical style is unique but has undergone multiple changes. Their music is raw, chaotic and with double the bass thus creating a very dark and trippy atmosphere. The madness reaches its heights but the band is in generally not evil or devilish, mostly blasphemous and a little satanic, nontraditional and particularly non-mainstream. The pain is divine and world of shit! (Hi5 if you get the reference)

Drumrolls , please. The No.1 death band of all time, Death, is here. Formed in 1983 by guitarist and lead vocalist Chuck Schuldiner , death is considered to be the founding members of death metal as a genre. This band evolved over the years and ceased to exist after Schuldiner’s death, the forefather of death metal. The band shifted its focus from bloody and gorey lyrics to more philosophical and psychological viewpoint to the extent that they are taught in various universities. The truth that Chuck wanted to propagate reached masses and Death established a never dying fan base. The names of the albums are beautiful and unique in their own way. Like Individual Thought Patterns, The Sound Of Perseverance, Screen Bloody Gore, Symbolic etc.

And as Schuldiner always said,”Let the metal flow!”