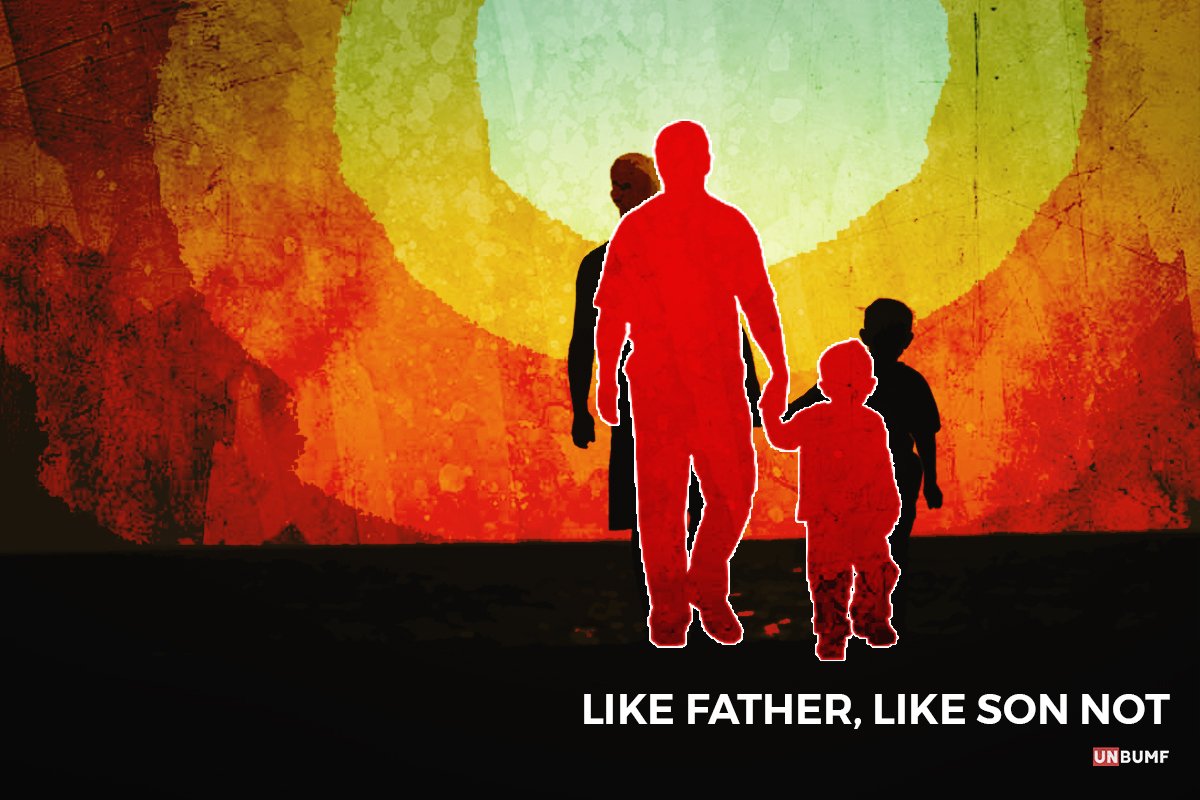 We are way past the time when a barber’s son had to be a barber, a doctor’s son a doctor. As a society, most of us have developed enough to understand that each person has their own calling, their own passions. But, what would you do if your parents were multi millionaires or constantly in public-eye and the entire country expects you to follow into their footsteps? Sometimes it does well, but a lot of the times, people are pressurized to take up professions that they have no passions for. 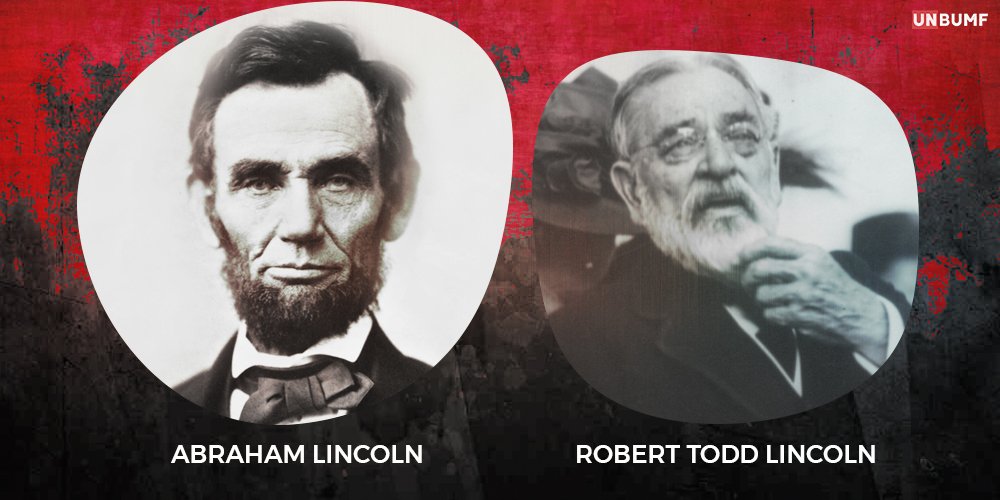 Father: The 16th President of the United States was known for having led the entire country through the Civil War. A war that was perhaps the most devastating of the ones country has ever seen. Lincoln contributed hugely towards the abolition of slavery in the country. He contributed among other similarly magnanimous contributions, like modernization of the economy. Those who knew him were in awe of the generosity of his spirit.

Son: His son, Robert Todd Lincoln was criticized by historians. Unlike his father, he stayed at bay during civil war. His mother, successfully and forcefully kept him out of the Union army during Civil War until its very end because she did not want to lose him. He did not contribute much to politics either. As a person, he was known to be selfish and coarse. 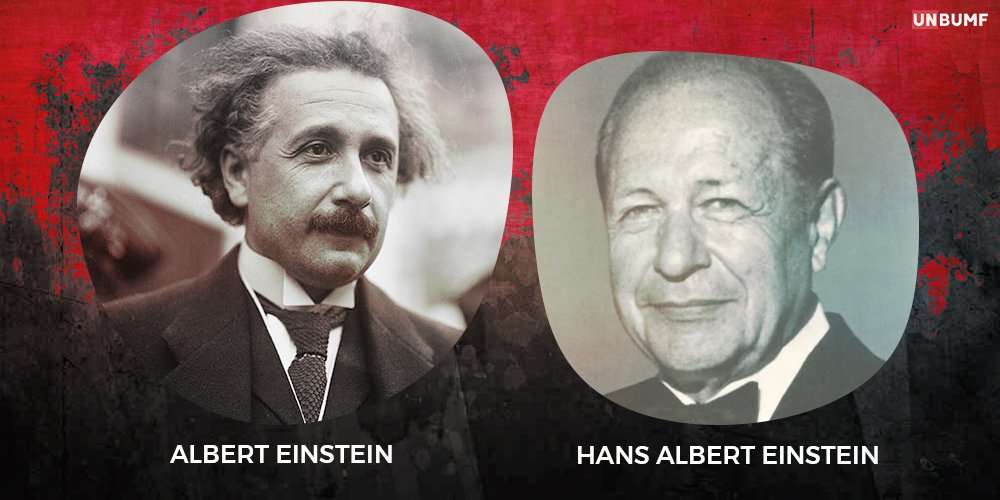 Father: The Nobel prize winner theoretical physicist has been credited for developing the theory of relativity. He influenced the philosophy of science and a long list of discoveries and theories that laid the foundations of some great scientific breakthroughs later in time.

Son: Albert was extremely proud of his son, Hans Albert Einstein. Hans was an expert in sediment transport.  Hans had a degree in Civil Engineering from ETH Zurich, the same institute from which his parents studied. But well, when your father is Einstein, you just cannot afford to be average to get noticed. Not as successful as his father, but he later became a full time Professor of Hydraulic Engineering in the University of California Berkeley. 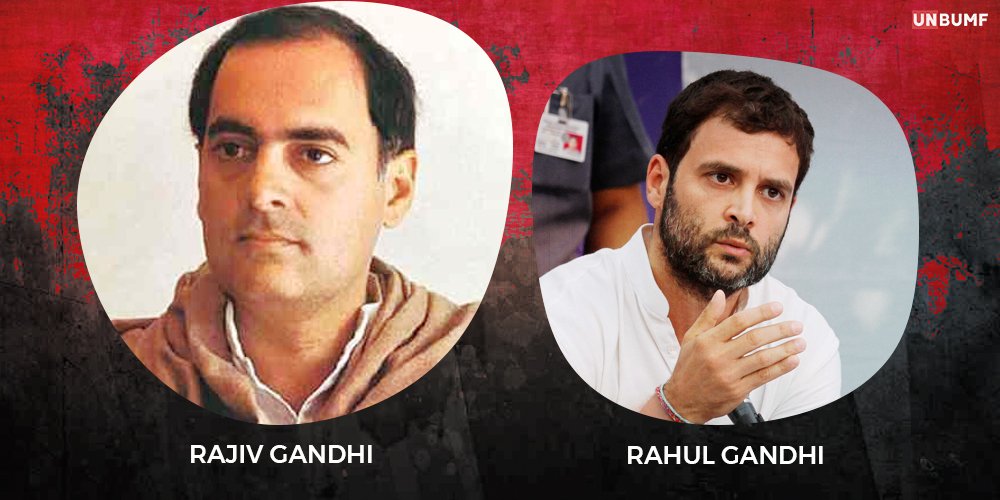 Father: Remember the 1982 Asian games? Rajiv Gandhi organised them. In 1985, he passed the Anti-defection law. The PCOs that we see everywhere today and MTNL, that supplies wi-fi to most of us, were all his creations. He was keen on modernising the country.

Son: Rahul, always a pampered kid of the Gandhi family, was home-schooled. He was not really attached to the roots of the middle and lower strata of the society. He was born with a silver spoon in his mouth. This did not really go well for his political career.Nobody else but Rahul Gandhi is to be blamed for the lows Congress Party has faced in the recent years. He is under constant pressure to meet the image of his father and keep up to the family name. 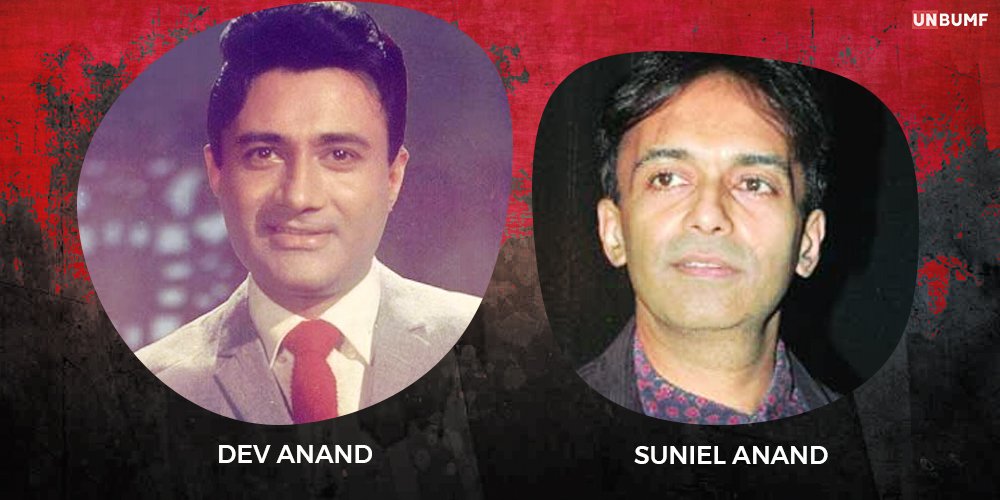 Father: Dev Anand was considered the ‘Gregory Peck’ of India. Through his classic charm and youthful exuberance, he reinvented himself as the ‘Evergreen DevAnand’ even in the 60’s. Not just in acting, his directorial debut, ‘Baazi’ was also a blockbuster.

Son: His son Suniel Anand resorted to managing his father’s business after his films failed to do well. Looks like Bollywood was not really lucky for Suneil! 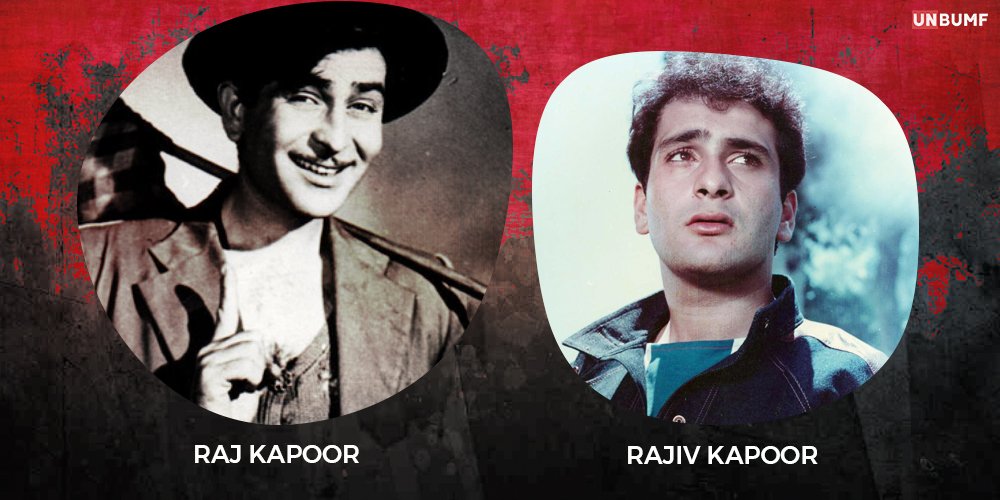 Father: Raj Kapoor has left a legacy so strong, that even his grandchildren made places for themselves in the film industry. An institution in himself, it was the sentiment that mattered in Raj Kapoor’s films. His music was also just as legendary, if not more.

Son: Most of his descendants are vital parts of the film industry, but there are few who could not make it big in the industry, like Rajiv Kapoor. He tried his hand in acting, directing, producing before finally giving up. 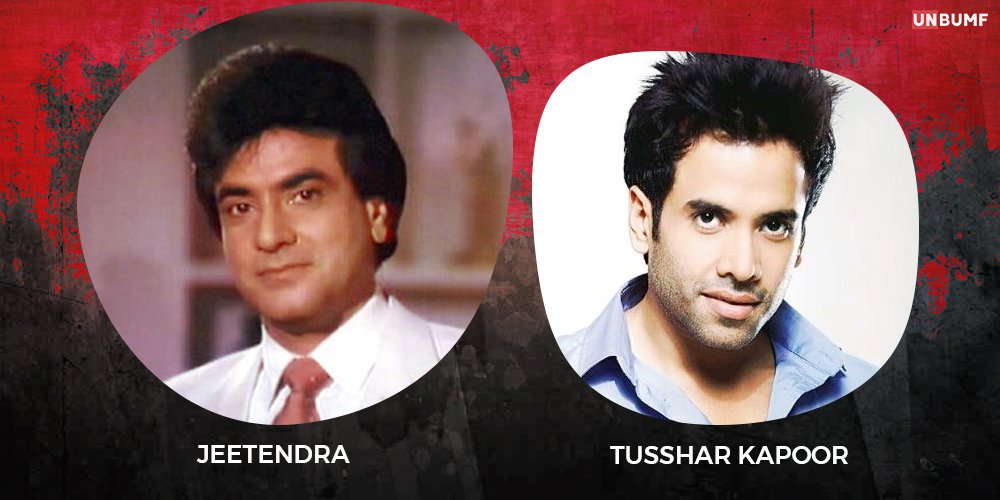 Father: Pick any of Jeetendra’s films and you will notice the tremendous screen presence that he has. His dancing skills are legendary which has given him the name of ‘Jumping Jack’. There are people who call him purely lucky, but can you really go as far as he has come purely pulled by luck? He is also currently the chairman of  Balaji Telefilms, Balaji Motion pictures and Alt Entertainment.

Son: His son Tusshar Kapoor sadly, is mostly known for his role of a mute man in Golmaal series. He was a a part of many popular movies but sadly was outshadowed by his other co-stars.

7. Dharmendra and his children 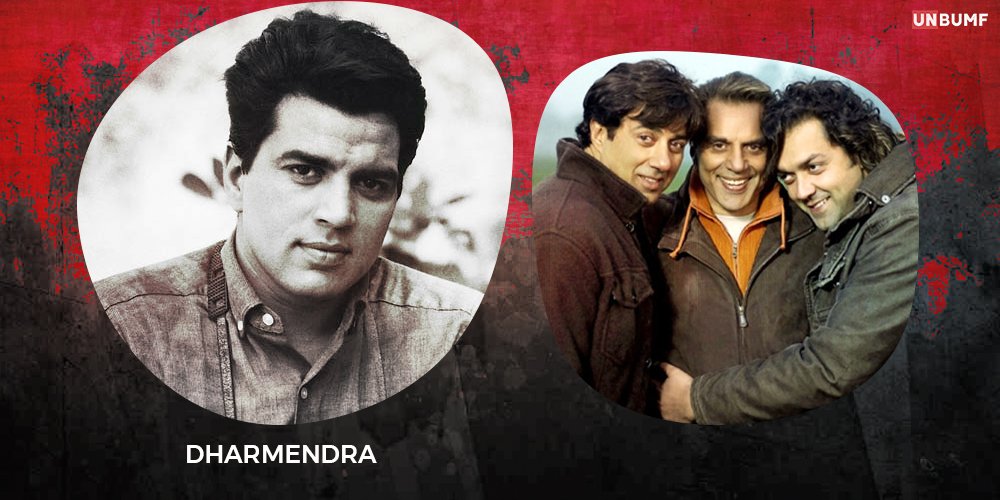 Father: The man has lead one hell of a life. He had affairs with the most beautiful actresses, acted in films like ‘Sholay’ and was awarded with the title of Bollywood’s first ‘He Man’. He was also awarded with the ‘World Iron Man’ award and was voted one of the most handsome men in the world in mid 70s. It is said that women would sometimes fall off their terraces while trying to get a look at him. He had a great comic timing and most of his films were typical Bollywood entertainers. He continues to enjoy humongous popularity.

Son: Except Sunny Deol, none of his children seem to have actually succeeded in Bollywood. Esha Deol appeared in a lot of multi starrers, but left no impact on the audience as an individual actress. Ahana is an Odissi and Bharatnatayam dancer like her mother and elder sister. Bobby Deol, apart from his chain of restaurants in Mumbai, has apparently become a DJ after trying his luck in some Bollywood movies. 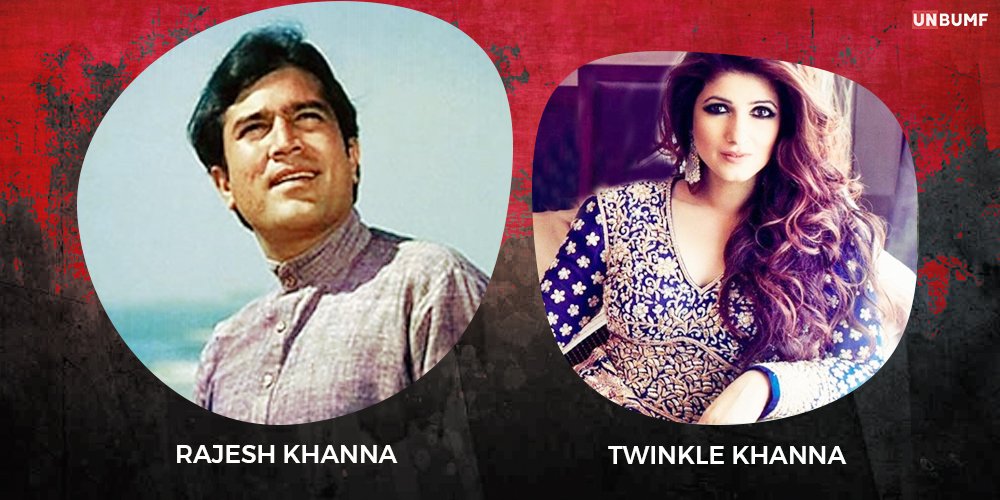 Father: From where do you think the term ‘Superstar’ originated? Rajesh Khanna, of course. He is called the ‘First Superstar of Indian Cinema’. He worked as the sole male protagonist in 98 films, of which 91 were superhits. To this day he holds the world record of giving 15 successive blockbusters and the characters he has played range from a rickshaw puller, a psychopath, a postman, an advocate,a single father, and so on.

Daughter: His daughter Twinkle Khanna on the other hand, is not shy of admitting that she hated acting. Her films barely scraped through and she is now producing her husband, Akshay Kumar’s films. She is also a best selling author, columnist and interior designer.

Following father’s (or mother’s for that matter) footsteps is not a good idea always..