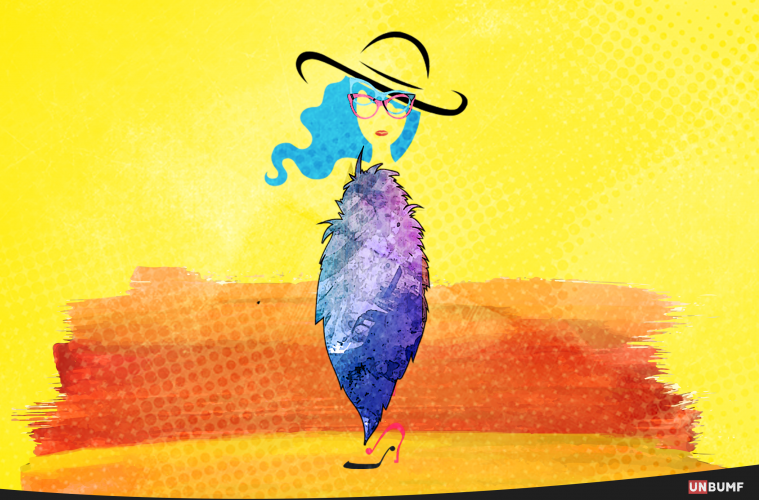 8 Weirdest Fashion Trends Which Will Make You Go OMG!

Honestly, it is difficult to define what is weird and what isn’t when it comes to fashion because no one can be absolutely correct when it comes down to it. There is just no right or wrong. One man’s trash can be another man’s luggage quite literally here. What one person may not even wear on their deathbed, other may prefer wearing it on a runway. So there really isn’t a boundary that can be set when it comes to being stylish.

However, there are times when it feels like designers are just messing with your head deliberately. So, after careful scrutiny, I think we must reach a consensus for weirdness when it comes to rubbish trends. We can all accept the fact that there comes a point in time where a line needs to be drawn. A line between what can still pass out as fashion, and something that JUST CAN’T.

Like shoulder pads and high-waisted jeans are on the edge of the line for quite some time, but we’ll keep it that way. Hammer pants and safety pin jewellery? Not so much. 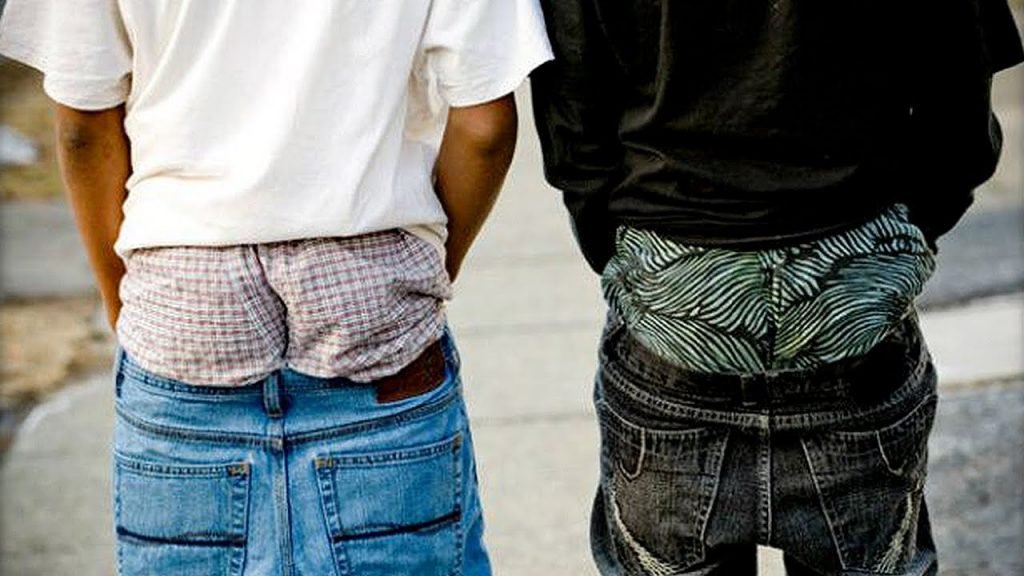 Okay, so I think the people sporting these pants must have nagging moms and for an absolutely good reason, because I don’t know why anyone would attempt to wear this out to the public. Sagging is a style in which one wears their pants/trousers below their underwear to make the underwear visible.

The sale of graphic underwears was a collateral to the ones of saggy pants. What I can’t wrap my head around, is putting aside the fashion agenda, how do these people find it normal to walk around in these? I guess ‘Fashion is to rise above comfort’ came from this particular trend. It must just be so tiring confronting people’s asses all day 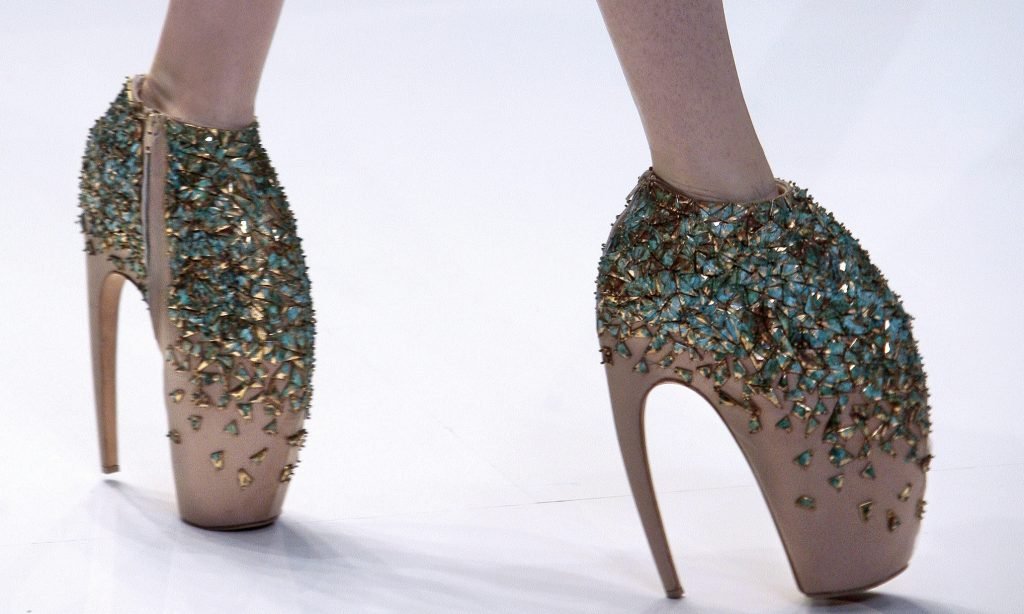 Anyone who has ever cared about their feet will totally avoid wearing these. However, the other 1% i. e. the fashion industry who don’t seem to care about their appetite, let alone their feet, wear these horrendous shoes and it became quite the trend.

Lady Gaga was a major ambassador for these 10-inch high shoes and one can only imagine the product if Lady Gaga endorses it! However, this trend did give a huge boost to the number of Orthopaedic Surgeons. So, I guess it was a win-win. 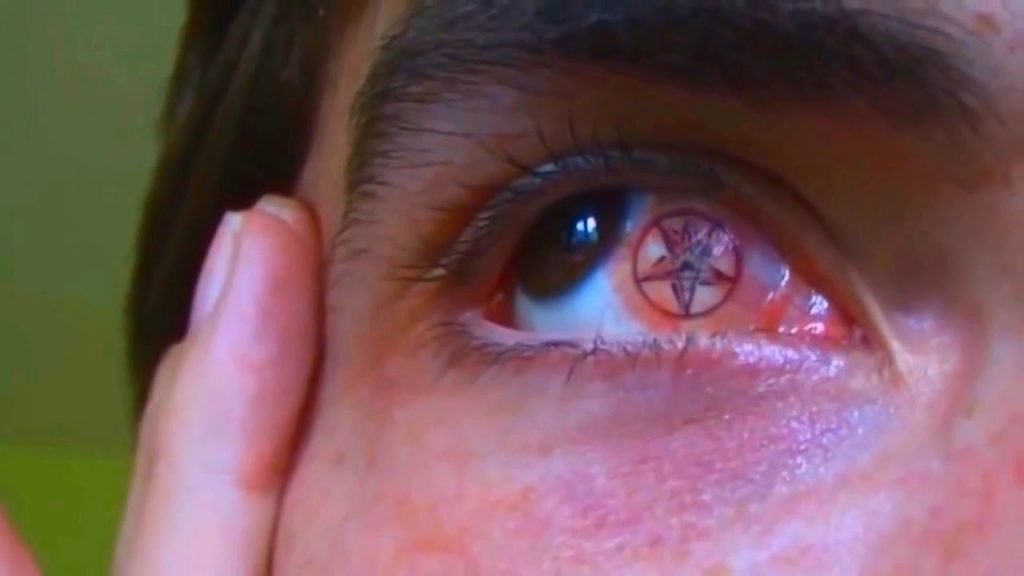 How often do you see something fashionable happening around the eyes? Almost never and for good reason.

Tattooing the cornea was something that was started by doctors originally, and it was used as a treatment for scarred eye tissue. But people, stylish as they are, started putting variously shaped stickers inside their eyes and sometimes even got them inked. Now, what is a little bleeding when you get to wear stickers in your eyes?!

Another eye-trend that started was colouring the white part of the eyes (sclera) with ink. Despite no medical applications leading to this creativity, this was only done to get some strange kick out of it, or to revolt against parents.

But if this a result of a rebellious stage, we damn well hope that parents start treating their kids right! Because this fashion trend is a living nightmare. 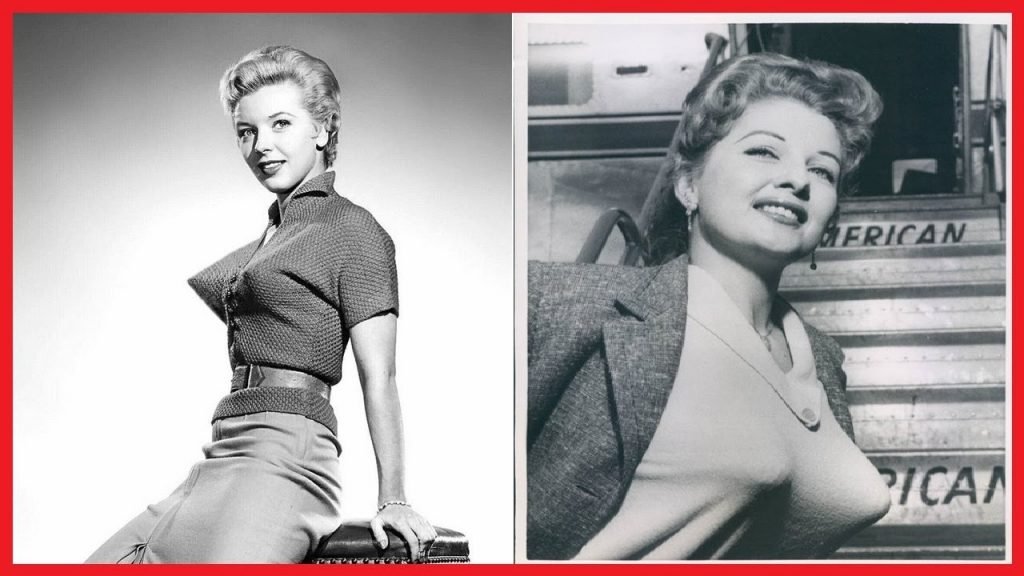 The cone bra or popularly known as the ‘Material girl’ bra courtesy Madonna, was something women wore under tight tops to make the appearance of breasts more triangular. Logic? No, thanks!

Even our Bollywood yesteryear actresses were seen sporting such bras with total elegance. I don’t understand what kind of disguise this was supposed to be, or maybe it was just to explain the anatomy a little differently? 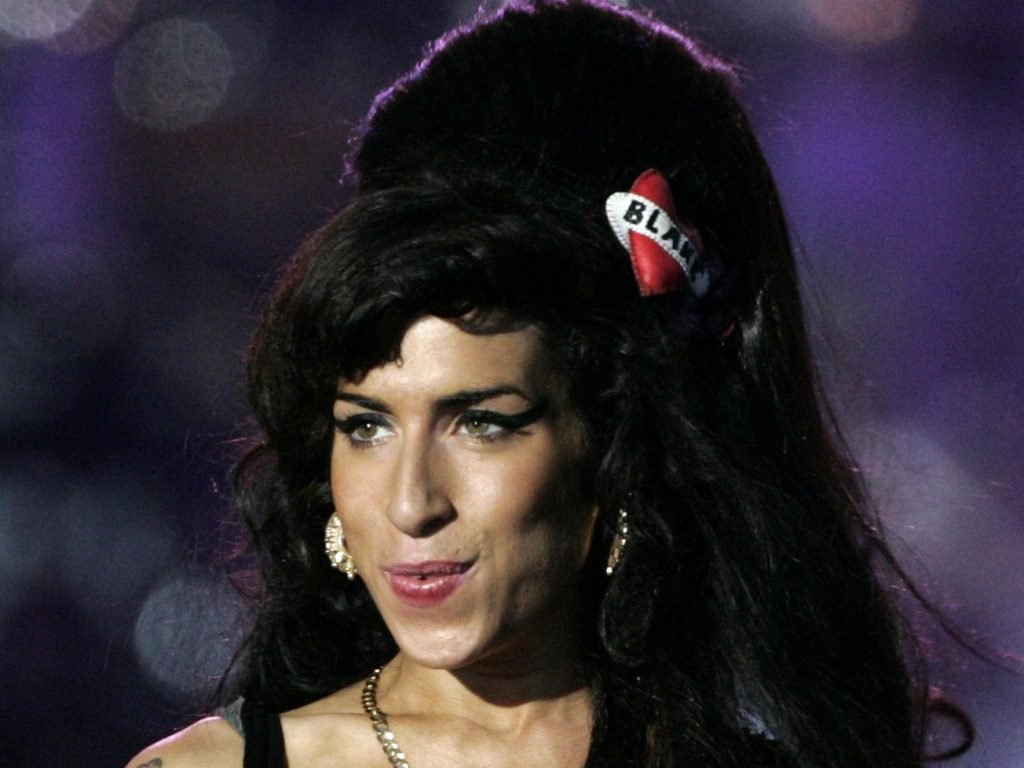 Amy Winehouse, may her soul rest in peace, was a walking fashion disaster and yet, an icon, nonetheless. Her eyebrows, eyeliners, and of course, the BEEHIVE! This carrying-a-2kg-extra-weight-on-your-head was a little too hard on the eyes of the viewer.

I would like to think that this trend was established in order to look a wee bit taller as compared to the other good-haired days. These overly puffed hairstyles were quite a thing back in the day and had made a comeback especially in Bollywood, and our local streets, not so long ago.

Girls wearing tic-tac clips to raise their puffs with at least 3cms was quite the shizz. 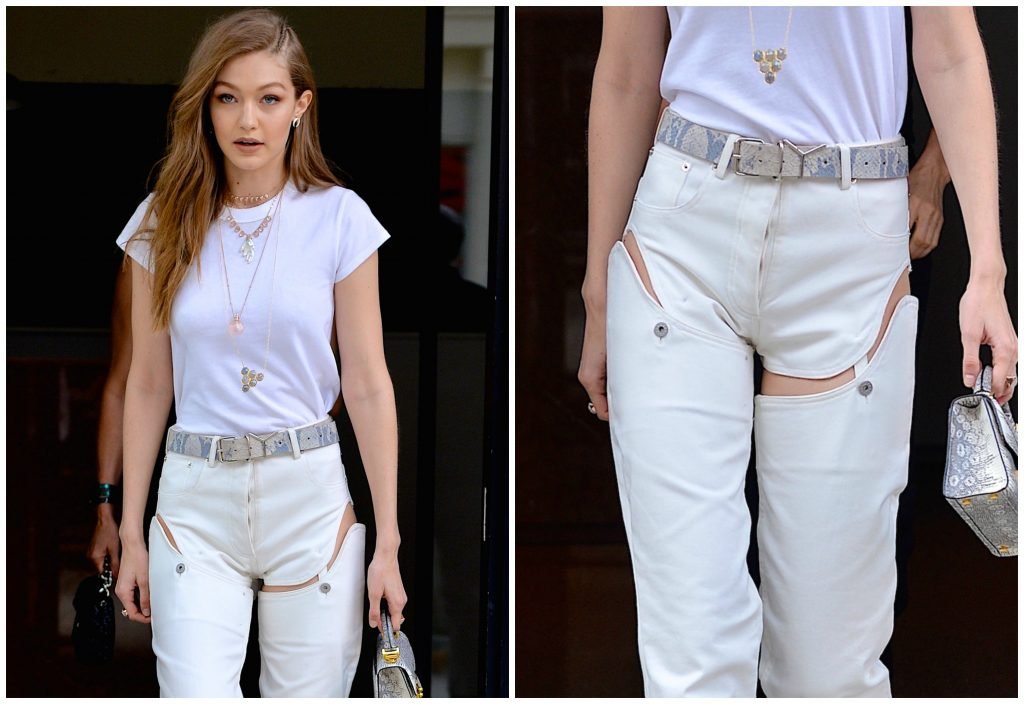 There is pretty much everything that you can make out of denim – full pants, shorts, jackets, and even bags. Take it from a denim lover, there is almost nothing that can go wrong when you rock a denim outfit. Or at least that’s what I thought before looking at this bizarre trend.

Detachable pants are shorts that have long pants attached to them. You can remove the extra length of the pants if you feel like wearing shorts, or vice-versa.

However, the pants look so horrendous that no self-respecting person would wear either of them unless they are too inclined to get in on this trend. It would definitely be just easier to buy a pair of shorts and jeans and call it a day. 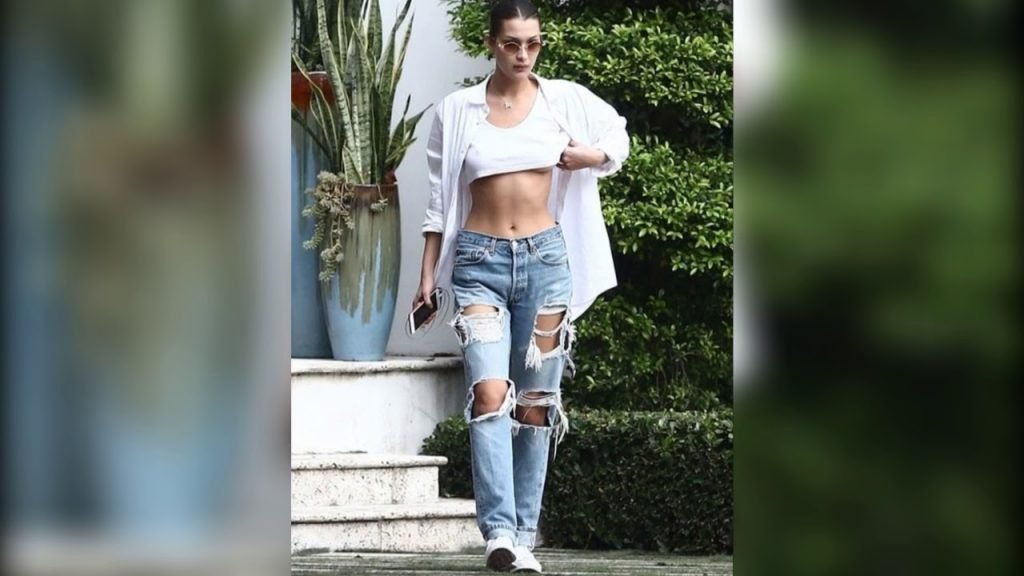 Source
This, although not so weird, is a little too much even for 2017! Crop tops without undergarments and just enough cloth to show a quarter of the breast is what the under boob is.

This has been spotted by various celebrities including Rihanna and Bella Hadid. It is like a sneak-peak into their amazing bodies. Maybe it’s all a matter of playing around with cuts and dimensions. 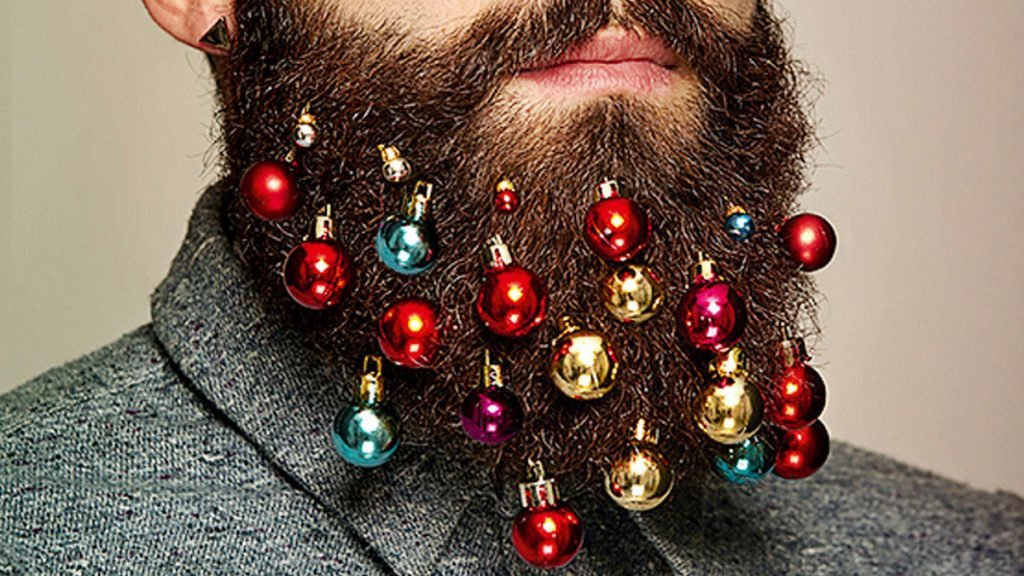 I am all for beards and November and everything goatee and French because God knows how hot a man looks in his beard. The only problem is after 1 there is 0.

You should stop when you’re at your peak. Let’s just leave the decorations on Christmas trees. Putting glitter on beards, colouring it, and worse – putting ornaments on it is just taking the beauty away.

If this is done in an attempt to make beards look less sexy, or make women think clean-shaven faces are sexier, I totally understand. Otherwise, all this effort – it’s just pointless.