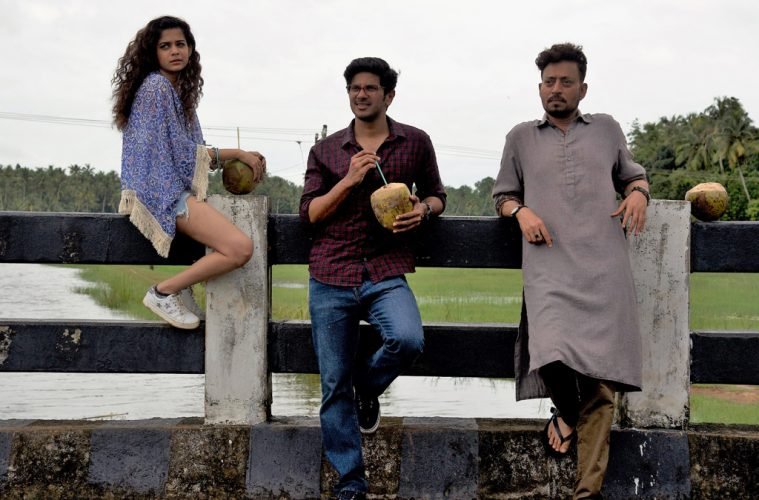 After a series of biographical movies and adaptations from non Hindi films, here is a story that has hit the theatres today – Karwaan, starring Irrfan Khan, Mithila Palkar and Dulquer Salman. This is a movie I have been waiting to watch since I had a glimpse of the trailer. And it did not disappoint me at all, considering that Dulquer, the heart throb of Malayalam cinema and the Little Things girl, Mithila are new to Bollywood’s big screen.

Avinash Rajpurohit (Dulquer Salman), a young man who is passionate about photography is stuck in the Customer Relations Department of a software company at Bangalore. His passion is bubble wrapped in the corner of an apartment in which he lives alone. He is just trying to please his father with whom he does not share a great rapport.

The story takes off with a phone call. This call is from a travel agency intimating Avinash that Prakash Rajpurohit (Akash Khurana), Avinash’s father has expired due to an accident on his journey to Gangotri. An unaffected but confused Avinash reaches out to Shaukat (Irrfan Khan), a guy who is an acquaintance and fixes automobiles. They together begin a journey that unfolds in to a path that has many hurdles along the way.

In their attempt to retrieve Avinash’s father’s corpse from a cargo company, they realise that it has been misplaced with another passenger’s coffin who died in the same Gangotri darshan mishap. Avinash and Shaukat together set out to deliver the wrongly retrieved coffin to the right people. Also, at the same time to receive the coffin  of Mr. Rajpurohit’s remains. It is then that they bump into Tanya (Mithila Palkar) who is the grand daughter of the woman whose dead body was erroneously delivered to Avinash.

The rest of the story is a combination of hilarious situations which practically would have been quite serious if such a thing were to occur in real life. Thanks to Irrfan, for delivering short phrased dialogues at every unfunny moment. The seriousness of the situation immediately seems to disappear owing to his role.

The movie is all about discovering oneself with another’s help. So often do we tend to keep ourselves aloof that we forget who we really are. Avinash’s character is just that. He has been a person who grew up limiting himself to the boundaries drawn by his father. Not because of any emotional attachment, but out of sheer respect. Yet his role forms a balancing element between the characters of Shaukat and Tanya.

Shaukat is a typical conservative man of the seventies who believes in all things old and has not transitioned into the present generation’s thought process. Tanya on the other hand is a university student. She is a girl who has not begun to shoulder life’s responsibilities yet. She loves to live without any chalked out plans. It is amusing how the three meet in a sudden journey and help each other find themselves.

Mithila, I believe has been given the right role to begin her performance on the big screen. This role is exactly how she has always portrayed herself to be; cool, carefree, bubbly and open minded. What I love about her role is that she does not seem to be uncomfortable in any part of the movie. I have no complaints about Dulquer either.

I mean, who could think that he would feel every Hindi dialogue just as he does with Malayalam? He seems like an experienced Bollywood actor. This role does not look like his debut in Hindi cinema. Irrfan Khan is a versatile actor. He is kind of liquid and thus takes the shape of the container he is poured into. He is definitely an artist who has a lot of experience in the field. Thus, there is no comparison between the actors in the movie.

Movie As A Whole

Karwaan is a great movie, with a new story that will please viewers. The setting has elements of Ooty, Kochi, Kottayam and Bangalore as per the storyline. The sceneries are a treat to watch. Though sometimes the story feels impractical, because it is weird to be roaming around with a dead body without feeling any discomfort. The characters do not seem to be affected by any of it.

But films or stories cannot be made to scale completely to real life situations. Keeping that in mind, I will not go to pin point errors or glitches, they can surely be overlooked. But I can definitely tell that if you want to take a break from a tiring week and laugh a little, this is the movie for you. I wasn’t displeased from my expectations and I’m sure you won’t be too.