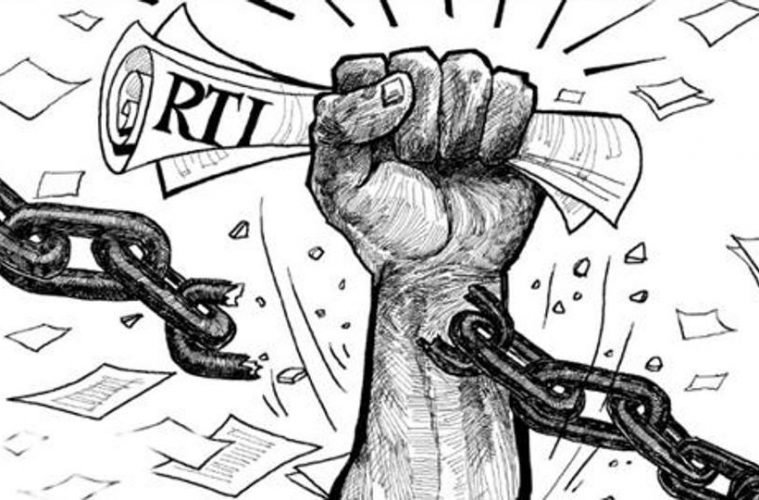 A Hitchhiker’s Guide To RTI: The Whats And Hows

The information age of 21st century is largely driven by cheap and wide spread internet. It is tremendously easy for people to communicate with one another. There is a free flow of information from one WhatsApp group to another. Thus, we are in a situation of an information overload.

The Post-Truth World And The Need For Authentic Data

Amidst this information overload, there comes another phenomena of a post-truth world. In this post-truth world, there is a rapid flow of news too. But  this is mostly fake. It is not surprising to find a ‘forwarded as received’ message for the 100th time on WhatsApp group; and feel proud because UNESCO declared our national anthem as the best in the world.

This post-truth world typically relies on the wisdom imparted by Joseph Goebbels. That is, if you keep repeating the lie big enough and keep repeating it, people will eventually come to believe it.

When no media house can claim to speak the gospel truth, the above ‘wisdom’ is quite often followed by journalists. They then make sweeping statements about how a particular Government scheme is a failure or a huge success. This of course depending on who is (allegedly) paying them. Such reporting invariably ends up portraying a picture which maybe far away from reality. Thus, spreading a narrative rather than the actual state of affair.

Though, the buck does not stop there. We are living in a country where opposition prefers sitting on dharna rather than engaging in a debate. Where the ruling party would rather keep on blaming the former Governments; rather than owning up the mess they have created.

The Messiah – The Right To Information Act 2005

However, there is a way to verify if any of the claims, ranging from UNESCO declaration to YouTuber’s data of a scheme, were true. What if I told you that if the opposition fails, there is a way through which even you, as a citizen, can hold the government accountable. Yes, there is a way. And it is The Right To Information Act 2005 (RTI Act, from now on).

Under the RTI Act, any citizen of India may request information from a “Public Authority” which is required to reply within 30 days. It was put in place to gather information and data from various departments and ministries, ranging from the number of beneficiaries under Ayushman Bharat, how much money was spent on foreign trips of PM Modi in the last 5 years to how much oil is present in our Strategic Oil Reserves.

But, do people actually use this Act? According to this report, approximately 1.75 crore RTIs had been filed between 2005 to 2016. Which amounts to hardly 1 in 74 person, in 11 years. Considering many of us know about the Act and the ancillary Fundamental Right to Information, this statistic shows two things – One, little awareness about the way to file an RTI and two, little motivation for filing the RTI request.

Today, in this piece, I will try to resolve the first issue, simplicity of which may end up solving the second one too.

Steps of Filing an RTI Request: 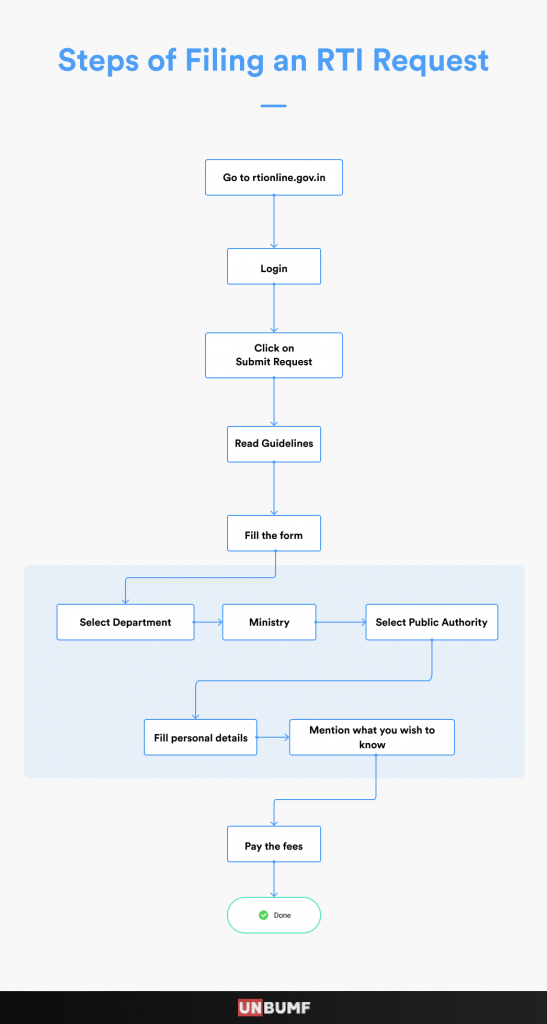 2. You can either choose to login or skip and directly go to ‘Submit Request’

4. Fill the form – Personal details, Authority to which you wish to file an RTI to and in the end – The information that you seek, write in crisp and lucid manner, preferably in a point wise format.

5. Pay the fees – 10 Rs. (If you belong to BPL, you do not have to pay the fees. But you’d have to verify through your BPL card number and supporting document as attachment.)

6. Wait for the the authority to send you the information to your address.

7. Public Information Officer has to provide the desired information within 30 days. If the RTI request involves someone’s Right to Life, the information has to be provided within 48 hours. Failure to provide the requested information in stipulated time or otherwise makes you eligible to file an Appeal to the Appellate Authority which can be filed by clicking on ‘Submit First Appeal’.

Here, we have established that filing an RTI is no nuclear physics. But it can certainly save us from a Chernobyl if we keep on demanding a more transparent and accountable government.

Towards good governance, one RTI at a time!

Disclaimer: This portal is to seek information from the central government and national authorities. To gather information from any state and district, every state has their own methods. These methods range from RTI portals to a request letter to be sent to the Public Information Officer of the respective authority.