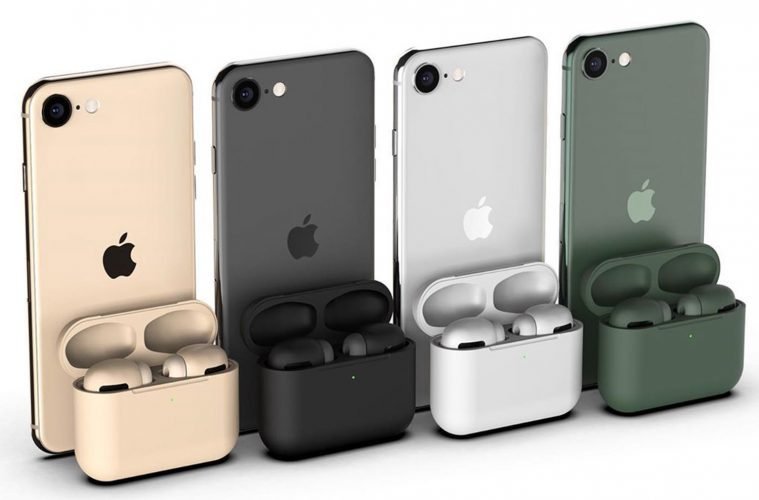 What happens when a manufacturer pays heed to user feedback and debugs all the issues with a device? – you get Apple AirPods Pro. This is not just an upgrade, but is a major next-generation leap. Despite the popularity of the product, the first two models were not recommended by the experts. So Apple decided to leave us awestruck with the launch of AirPods Pro. It has an array of amazing features and a cost of 249 USD. These are easily worth the premium as compared to the standard models.

Let us get into what are looking at in terms of design and features with the launch of AirPods Pro:

One of the major changes in the Airpods Pro is that the Pros ditchs the “one-size” earphone in favour of three different sized interchangeable silicone ear tips. These buds are amazing for noise cancelling of course, but with buds come their technical issues. And Apple has solved them all. Buds usually ping off precisely when you do not want them to, that is as you remove the earpieces. With the Pros, however, Apple has designed a fixing mechanism that renders their own silicone tips seemingly welded to the casing. I have no idea how Apple has achieved this, but the person who came up with this really resolved a big hindrance.

Buds usually also end up feeling uncomfortable when you put them in, as the seal creates suction and pressure in the ear canal. To counter this, the Pros employ a vent system to equalise the pressure, thus minimising the uncomfortable suction. Not that I am a lapdog to the brand, but these are the most comfortable earbuds I have used so far. Considerably the larger head of the Pros is elongated and shaped to fit in the ear pinna, thus hiding the bulk. This new size and shape have resulted in a shorter and wider case.

In short, the new design is not merely a successful tinkering of the old model, but a triumph. Apple clearly went back to the drawing board and started from scratch. 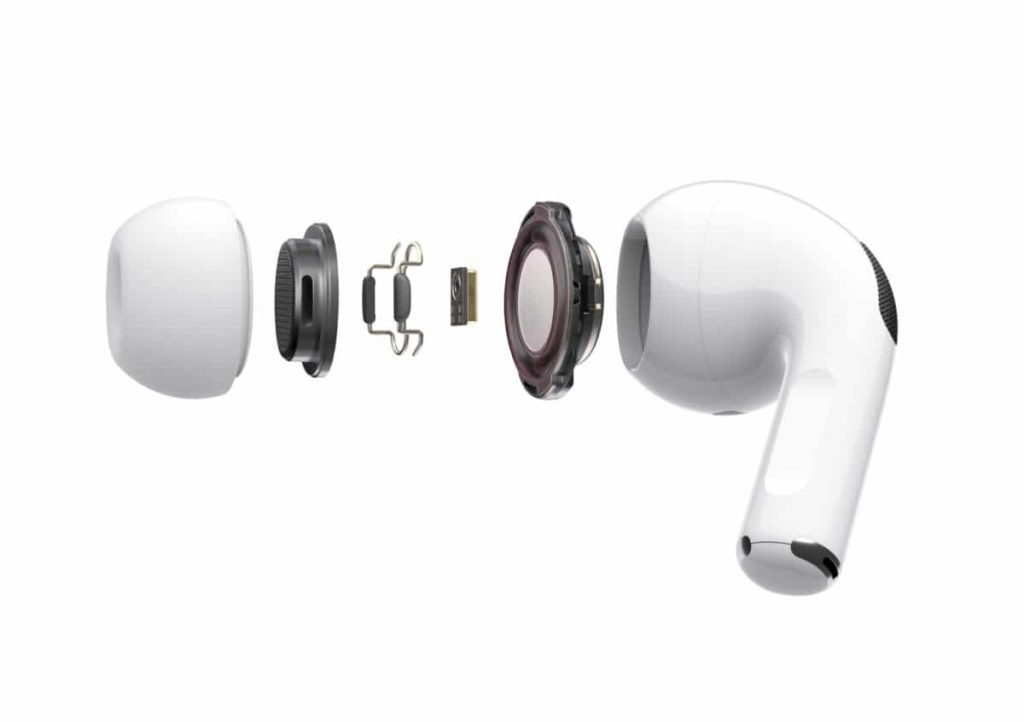 For the AirPods Pro, Apple includes different sizes of silicone tips: small, medium, and large. To take any guesswork out of finding the right size, the company added a software-based fit test to the AirPods’ settings. This is available in the Bluetooth section of the iPhone’s Settings app. You just have to put the AirPods Pro in, and the test plays a small snippet of music. Meanwhile, an inside-facing microphone listens for how things sound in your ears. If a tip is loose, you are told to try a bigger size. It works!

But all the test does is checking for a seal, so you might see a good result for more than one size. So picking comes down to comfort and how well they stay inside your ears. You might find that a different size in each ear works best. 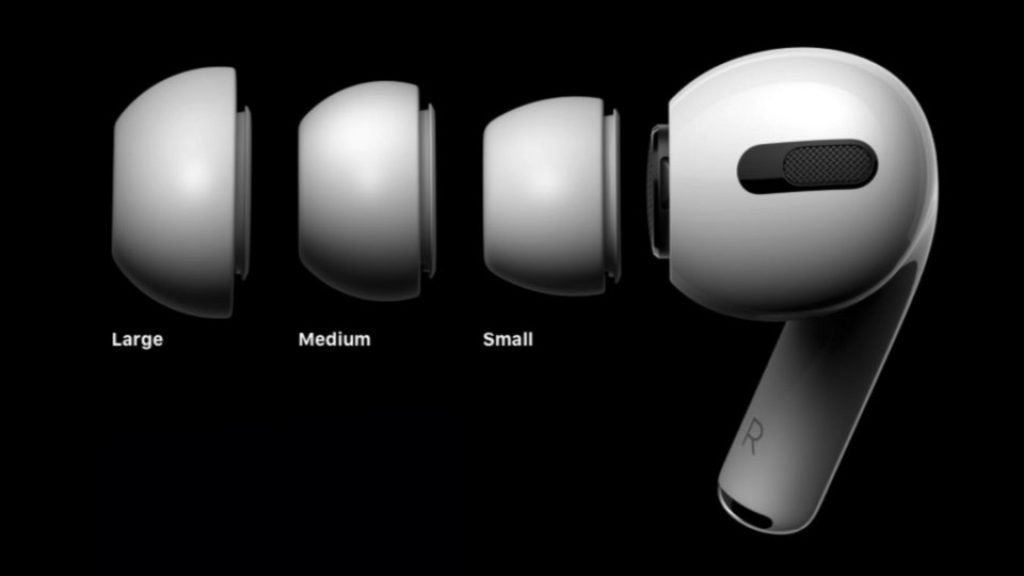 With the shift in design, Apple has also changed how you control the new AirPods. Instead of tapping a touch sensor built into the sides of each earbud, there is now an indented “force sensor” on the smaller-than-before stems of both AirPods that you squeeze to execute an activity. There is no actual button, but you hear a very quiet click in the earbuds when the sensor is pressed.

• Quick squeeze: play / pause / answer calls.
• Double squeeze: skip to the next track.
• Triple squeeze: go back to the previous track.
• Squeeze and hold: Switch between noise-cancelling and transparency modes.

Using the force sensor takes intentional effort. It is not as simple of interaction as the side taps were — you have got to use two fingers. Personally, I prefer the new method. I am curious whether Apple might adjust how firmly you need to squeeze in future firmware updates, as some people seem to be struggling with the transition. It would be nice to have a choice between the two methods, and this also could have opened the door for more physical controls (like volume) with taps doing some functions and the force sensor handling others.

For now, the only customisation you can do is picking what happens when you squeeze and hold the sensor on each earbud: both toggle between noise cancellation and transparency modes by default, but you can also have one invoke Siri if you find hands-free “Hey Siri” commands are not dependable enough. And if you want a long squeeze to include an off mode for both noise cancellation and transparency, you have got to add that in settings.

Mercifully, Apple also makes it easy to control noise cancellation from Control Centre on an iPhone or iPad (just hold down the volume slider) or with Siri voice commands, so you do not always need to squeeze. 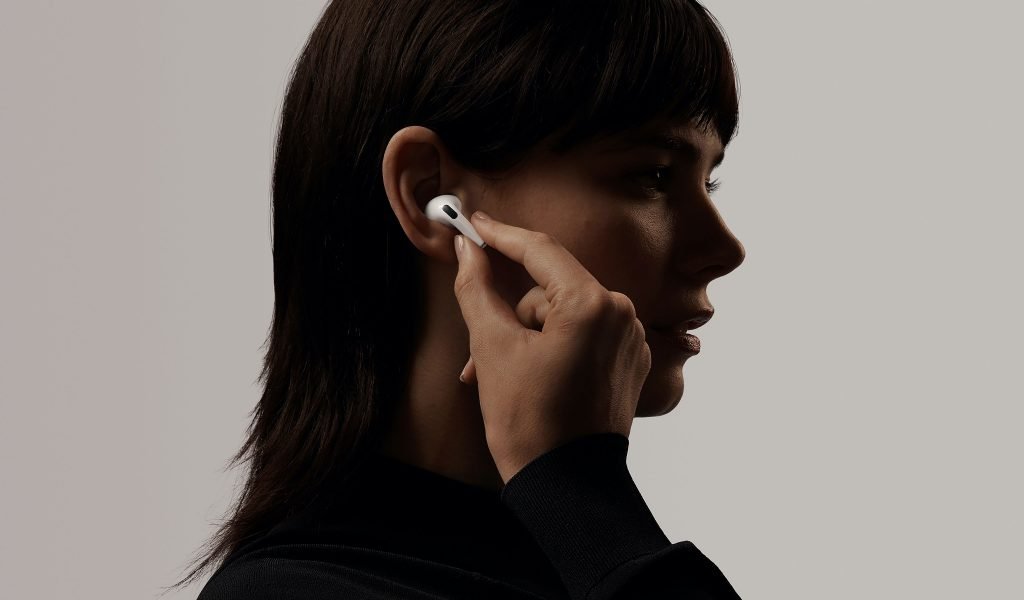 As is standard, the AirPods Pro uses two microphones to remove background noise. An outward-facing mic is there to detect external sound and environmental noise, while a second inward-facing mic listens toward the ear while the noise cancellation software adapts the sound signal 200 times per second.

I would not go as far as to say the NC in the Pro is the absolute best I have heard in any headphones. But it is very good indeed and up there with the top performers considering the size of each unit. Also, there is no hint of hiss or whine that is present in some noise-cancelling headphones.

The transparency mode, now almost an obligatory function with noise-cancelling headphones, also works well. The idea is that this lets you dial out the noise cancellation to filter in sounds from the outside world. It uses that clever pressure equalising vent system coupled with software tweaks to keep a small amount of noise cancellation active. You are meant to use this to hear people speaking or announcements in stations or airports. But does it work? Yes! 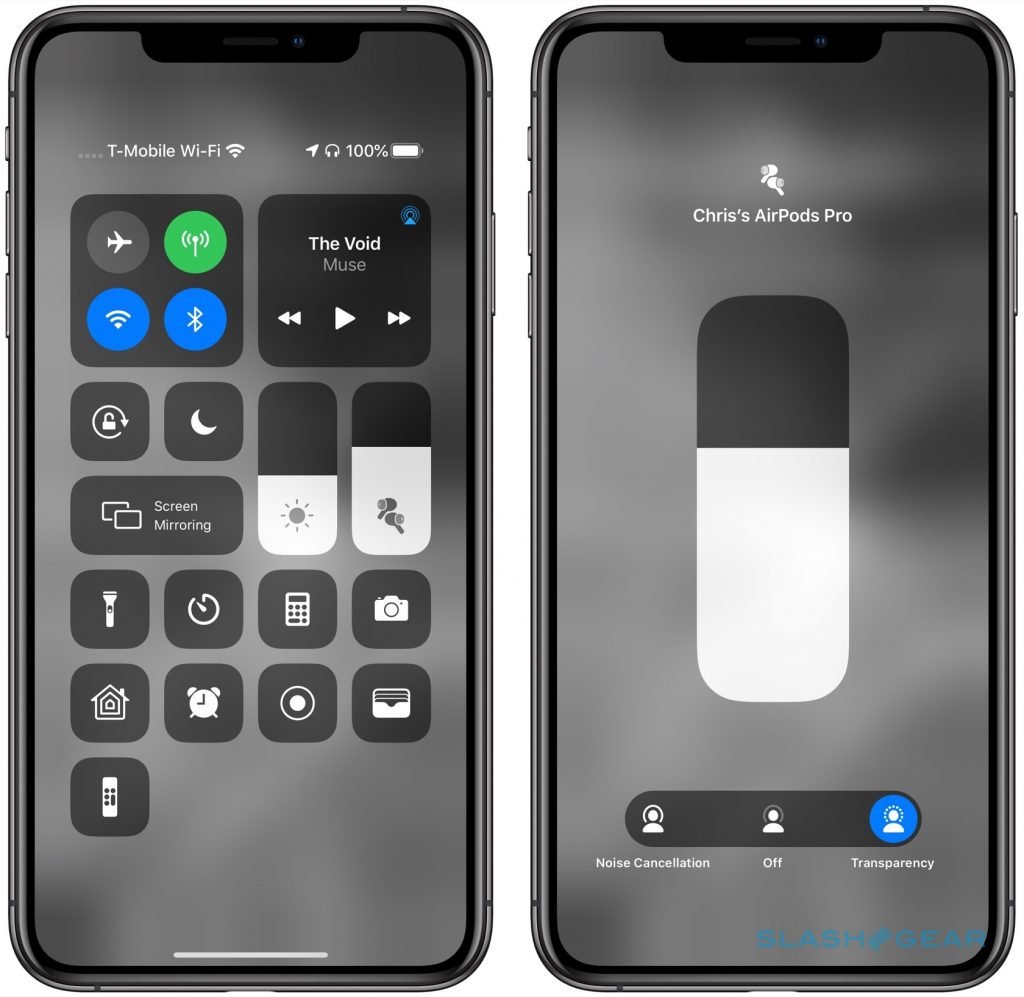 There are other features such as audio sharing with other AirPods and Siri integration, which are perfectly serviceable, but I am sure you are more interested in the sound quality. Well, they sound superb. Apple has created an adaptive EQ that automatically tunes the low- and mid-frequencies to the shape of your ear, while the sound itself is driven by a custom high-dynamic-range amplifier and high-excursion, low-distortion speaker driver that can deliver bass down to 20Hz.

Listen to The Meters’ Just Kissed My Baby and in the first 30 seconds, you will hear all you need to discern how well the Pro delivers the high, mid and low frequencies. What is most impressive is the balance of these frequencies, though, with vocals never being overwhelmed by instrumentation or vice versa. Switch to something with enormous, deep bass – such as Peter Gabriel’s Secret World – and you would expect the Pros to fall at the last. They do not. Podcasts and spoken words are also equally well delivered. 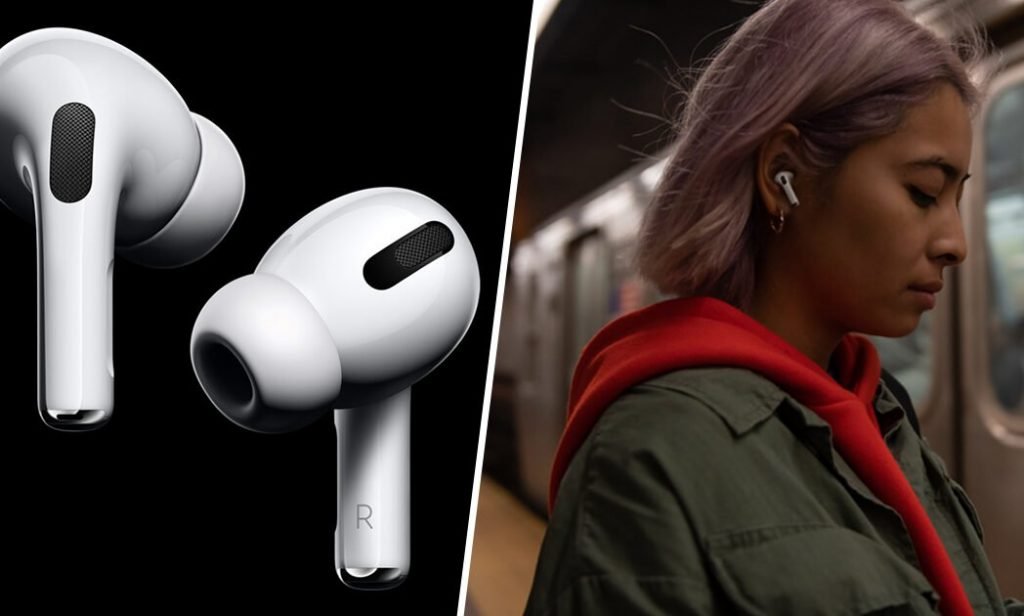 Thanks to those silicone tips and the addition of sweat and water resistance (IPX4 rating), the Pros will now serve you much better while exercising. In fact, such will be the performance while being active, you have to wonder how the chaps at Beats in charge of the Powerbeats Pro feel about Apple’s new creation, as these are clearly now a viable alternative for fitness earbuds.

The battery is a little less than the old version, 4.5 hours with noise-cancellation, compared to the older AirPods’ five hours without. But you do get more than 24 hours of listening using additional charges with the case – plus in an emergency, a five-minute case charge provides about an hour of listening or talk time.

The reason for the battery drop is largely due to the addition of active noise cancellation, bringing the Pods up to spec with the likes of Sony’s WF-1000XM3 earphones.

Individual fit is a subjective thing, and in my opinion there will be more people whose ears play better with AirPods Pro than they did with AirPods than vice-versa. The improvements in isolation from a purely physical standpoint, combined with solid active noise cancellation, make the AirPods Pro the earbuds to get if you are choosing from Apple’s range. Those who enjoy the sense of ambient connection the AirPods offer will get the same through the excellent Transparency mode. 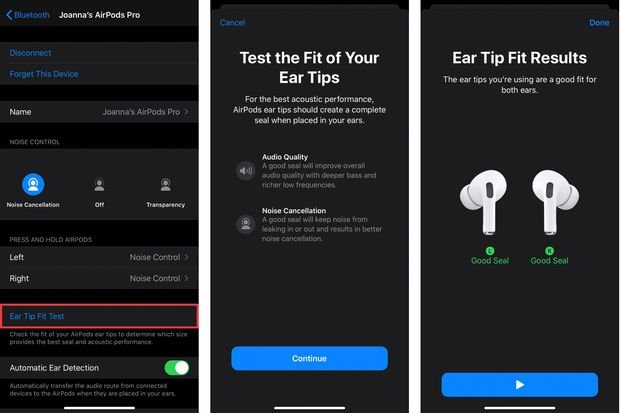 Nonetheless, there is always room for improvement. Apple’s ANC is good but it is not the best out there, at least to my ears. Similarly, battery life is good but not great. The AirPods team could do worse than look to their Beats counterparts, too, who built an Android app so that those outside of the Apple ecosystem could more readily control the Solo Pro’s settings. For those who want simply the tightest integration with their iPhone, Mac, iPad and anything else with an Apple logo, though, the AirPods Pro is a compelling all-rounder.