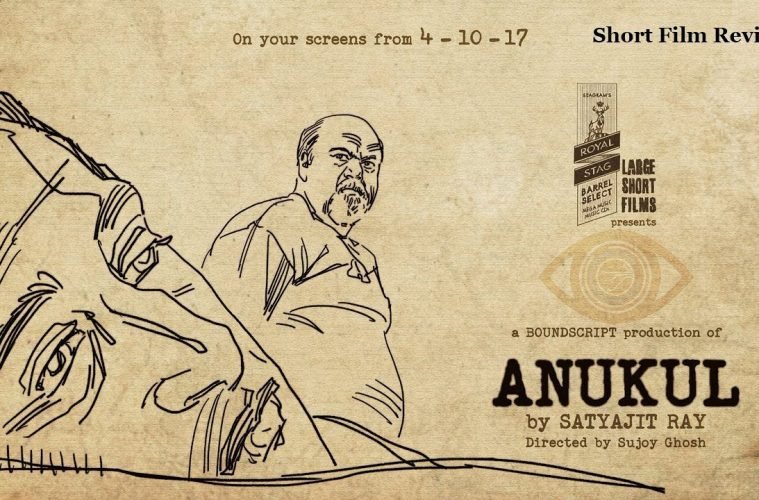 Anukul: The Best Sci-Fi Short Film India Has Ever Produced

If there ever were to be an award for the most misunderstood genre in the history of films, it would inevitably be science fiction. And why not. Anything, be it a story, a novel, a film, a TV series or web series; if it has an implementation of technology, we label it sci-fi.

What many a times we do not realise is that the basis of a sci-fi film is never the technology it portrays but the effect that technology has on the lives of people. The impact it has on us or it can have on us in the near future. Most of the times when we watch a sci-fi film, we happen to be fascinated by the technology or the possibility of the technology that the film explores. This fascination sometimes drifts us apart from the true basis of the film which was the effect and not the cause.

Although sci-fi happens to be a mule for Hollywood and some Asian countries. India has never been able to contribute to the genre. As on date our contribution stands as – Ra.One, Krrish, Enthiran, Love Story 2050, Joker, Mr. X and some other films here and there. It would be utterly futile to comment on any of those films. They may have their own audience but I can never in good conscience let them be labelled as good sci-fi films. It would be an injustice to the genre.

Sci-fi deserves better. We deserve better. Lucky for us, a brilliant filmmaker named Sujoy Ghosh made a short film that, in my opinion, is the best sci-fi short film India has ever produced.

Based on the short story by Satyajit Ray (yes the legendary Satyajit Ray, the late writer director who happens to be one of the greatest filmmaker of all times), Anukul is a sci-fi short about a Hindi teacher who hires the services of an android named Anukul.

That is the plot line. What is the short film really about? It is about humanity, consciousness, artificial intelligence, morality, duty, choice and that is just the tip of the iceberg. The short film explores the effect of creating an artificial intelligence and letting it gain consciousness but it does not just stop there. It builds up from that point on and educates us about the implications of what a conscious being is capable of and whether its actions are governed by the human sense of morality. More importantly, do we refer to the being as ‘it’ or ‘him/her’? 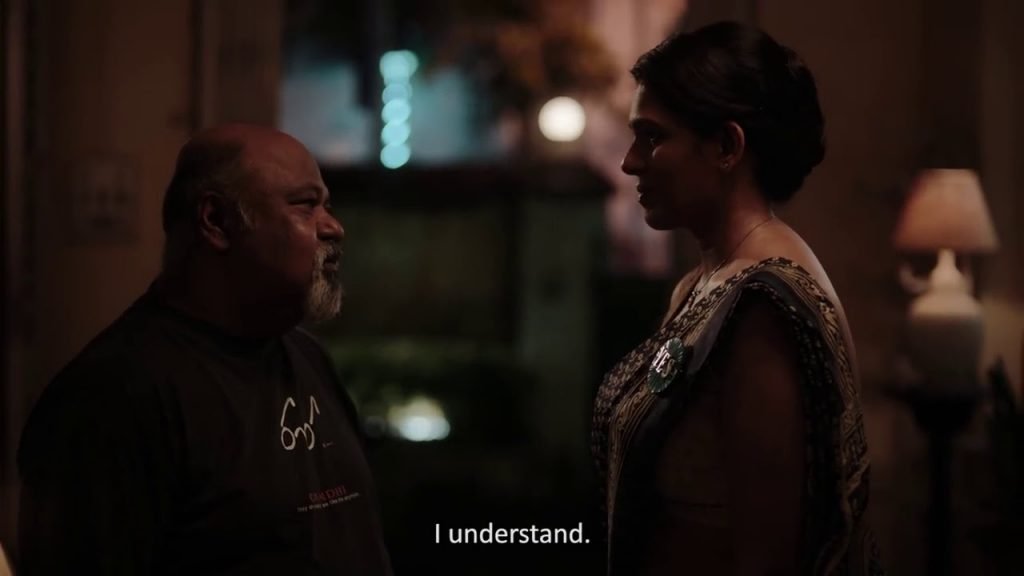 The short film also poses a question about our perception as human beings by trying to distinguish between two parallels that we have drawn from a long time. The parallel being, religion and science. What we cannot explain, we sweep under the rug of ‘magic’ while what we can, we showcase on the podium of ‘scientific discovery’.

Here is the short film Anukul.

Now that you have watched the short film, let us break it down bit by bit. The short film begins with a shot of a city line. It has one high rise building having the initials CRS and an eye on top. We find out what CRS means in the next scene where in the office of the Chowrangee Robot Supply Corporation our protagonist is reading the contract.

The first dialogue that we hear is when Nikunj (the protagonist) refers to Anukul as Yeh. It clearly establishes the perception our protagonist has for the robots as he treats them as a ‘thing’. He is corrected by the woman who insists that Nikunj refer to him as Anukul and to treat him as a human being.

For those of you still wondering, Anukul means ‘compatible’. This is what the lady tells Nikunj that Anukul will learn his ideals, his ideologies as Mr. Nikunj shall be his role model. This is a sly comment on the fact that the conscious beings we create will only be as good as us and how good are we is a matter of exploration and discovery. 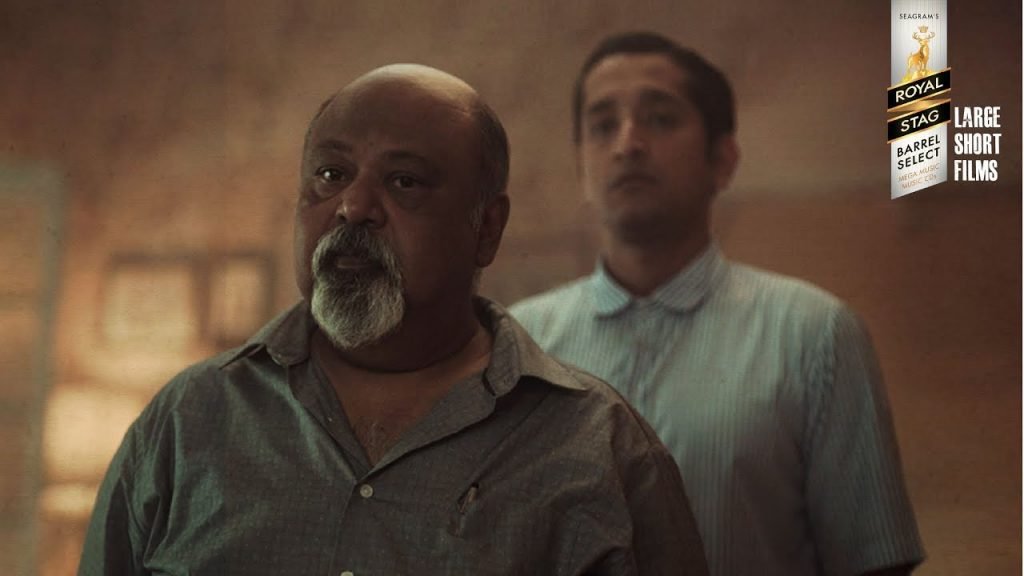 Something which aspiring filmmakers can learn from My. Sujoy Ghosh is that in the end of the office scene we see the lady give one final piece of information but the information is never revealed.

This is a very brilliant, tried and tested hook. You give the audience not the piece of information but the idea that some information was given and that information itself is shielded from you.

Then we see Anukul learn. We humans, become what we learn. In case of Anukul, he shall become human by learning to be one. An act that we should do ourselves. Then enters Ratan, the younger brother of Nikunj who harbours a deep hatred for the androids. This hatred stems from the fact that he got tanked on his job because of androids. A heated exchange takes place between the two brothers who essentially discuss the core basis of the film. Effect of androids and conscious beings on their lives. The exchange sees Ratan storm off and brush with Anukul. Ratan says a brilliant dialogue

“We humans are only smart enough to build robots. The creator and the creation. Marvellous.”

When Ratan hits Anukul, the information that was shielded from us is revealed at the time when we least expect or want it. The lady talks about the absurd statement – rights of a robot. Why should robots have any rights? Even if they gain consciousness, they are still not human beings. 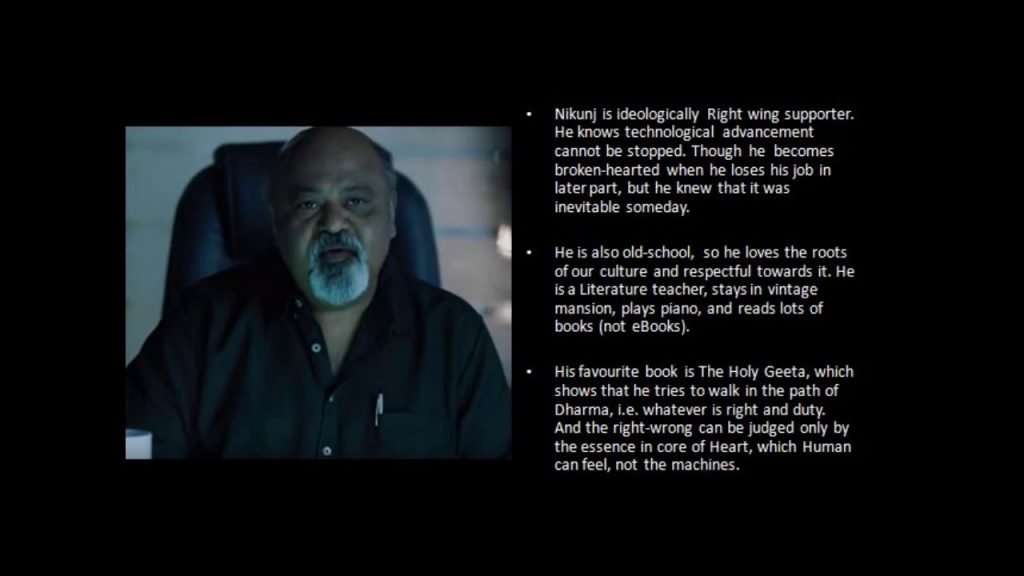 Now we enter in to the most sci-fi part of the film that also happens to be a discussion, which includes the Mahabharata. Anukul is reading the Bhagwat Geeta and he draws the parallel between himself and lord Krishna. This is because both are immune to the human understanding of death (and also poison).

Anukul asks the question – The brothers are trying to kill each other. Isn’t it wrong to kill your family?

To which Nikunj answers that “Every act is justified by your duty. Even if the act involves doing horribly gruesome things, one can always justify it by the duty. Duty is paramount.”

Next question – But what about the duty of a brother? Duty towards your family?

To which Nikunj replies that, “Duty is circumstantial.”

Anukul, still not convinced asks him about morality. What is right and what is wrong? How do you decide which side of justice is the right side? Nikunj gives out the answer that Kevin Spacey delivers in K-PAX. He keeps his hand on his heart and tells Anukul that he will know the right side of justice by the voice inside – the conscious.

When Nikunj meets an anti-android union head, he lies about ever hiring an android. Anukul questions this to which Nikunj replies that the decision to choose when to lie also comes from your conscious.

The climax of the film is where it all culminates beautifully.

After getting the information that Nikunj got nothing in form of the inheritance and that he does not even have a job anymore to keep availing the services of Anukul, we see the final transformation of Anukul and not just him alone. Mr. Nikunj who referred to Anukul as ‘yeh’ in the beginning of the film, defends his feelings against his brother who is still hostile.

In the moment when Nikunj moves to his bedroom, a loud thunder is followed by the death of Ratan. We as audience never really know whether he did attack Anukul or that Anukul lied about him being attacked as by now, Anukul has learned how to lie. Finally when Nikunj meets the lawyer to discuss the inheritance, we see a last shot of Anukul smiling and resting his hand on his heart cementing the fact that he did eventually follows his heart. He did perform his duty towards Nikunj and he did in fact, kill Ratan as such was his duty. He did lie to Nikunj and everyone else as such was the need of the circumstances. Anukul finally becomes human.

‘Anukul’ is the best sci-fi short film ever made in India. It takes us on a journey where a conscious being transforms in to a human being. From simply being conscious to being a human. That pursuit is what we all should embark upon. Shouldn’t we all try to be human first? Maybe then, the world will become a better place.