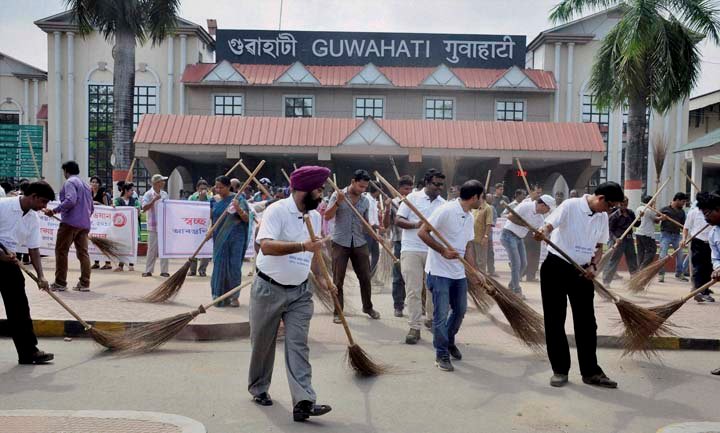 2nd October is Gandhi Jayanti. It is also known as International Non-Violence Day. This day commemorates the principle of non-violence taught to the world by Mohandas Karamchand Gandhi a.k.a. Bapu. He is an immortal figure remembered with great reverence all over the world.

The 149th birth anniversary of our Bapu was celebrated across the world. These celebrations were done with video projections of Bapu’s life on 17 iconic  buildings, this year. These included Burj Khalifa in Dubai to the United Nations building in New York. This was to mark the start of the 150th year of birth of the great Indian freedom fighter who led the masses with the power of ‘Satya’ (truth ) and ‘Ahimsa’ (non violence).

October 2nd also marks the completion of 4 years of the largest ever cleanliness drive in India- the Swachh Barat Abhiyan. Indian Prime Minister Narendra Modi launched Swachh Bharat Abhiyan mission in 2014, with the target to make a Clean India, and 100 percent open defecation free India by october 2019 which coincides with 150th Gandhi Jayanti.

Mahatma Gandhi was a freedom fighter in complete sense. He fought not only for the Country but also for the downtrodden masses. He was a social reformer who wanted to rid the society of all kinds of stigmas associated with low level professions. Bapu stressed on the need of freedom in every village and every street of India. He emphasized on cleanliness and for the eradication of untouchability. He said,” Everyone is his own scavenger.” According to him, if everyone takes  the responsibility of cleaning up around himself or herself then there will be no need of degrading any particular caste group. This will eventually bring parity and equality.

On the occasion of Gandhi Jayanti, we thought we will take a score of how the Swachh Bharat Abhiyan has done till now. The results of our efforts to channelise India to clean India are quite impressive. The main target of this program was making India 100% open defecation free by October 2019. And it seems like we are head on to achieve the goal in real time.

Due to elimination of open defecation, the spread of diseases among children have dropped down significantly. With annual survey of cleanliness and city rankings, people are really working on keeping their cities and hence country clean. Indore is the cleanest city.

Under this program, railway ministry has installed 1,20,5000 bio toilets in train coaches which converts human excreta into gas and water and thus preventing filthing of railway tracks.

The vigour and zeal to fulfill the goal and vision has led to the evolution of many Swachh Warriors. People like Phool Kumari, Sudhakar Tyagi, Rajashri Sadani and Shreya bothra, are trailblazing the way to a New Clean India of our dreams.

The Swachh Bharat mission has delivered remarkable progress and seems promising. But there are many issues deep in the Indian society that still need solution to jobs like manual scavenging. Today, when we are thriving towards a better future, many people are facing oppression. The ‘cleaning human excreta for roti’, this dehumanizing practice of manual scavenging needs to stop. These people need legal provisions as well as rehabilitation to start a dignified life.

Mahatma Gandhi’s dream of Swachh Bharat can only come true when 125 crore Indians come together. His ideals and dreams cannot reach fruition in isolation.