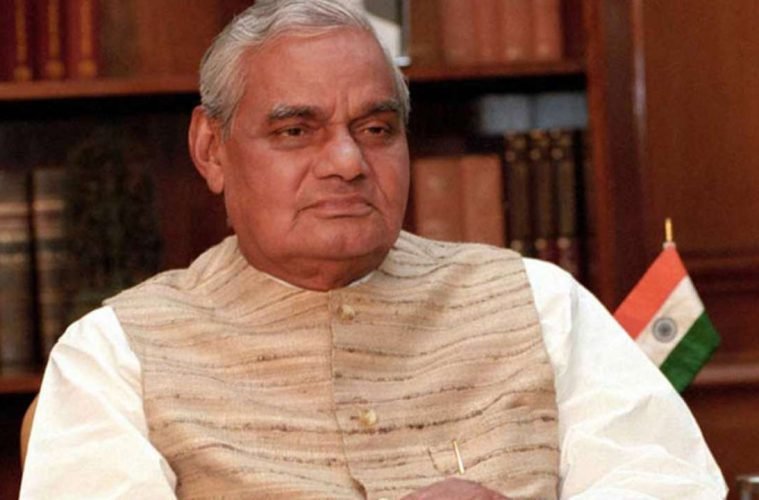 Indian history boasts of great leaders. Be it our glorious freedom fighters or the few distinguished politicians. There are those who kept the best interests of our country and men before any politics. Thus, today we mourn the passing away of one such great leader, Bharat Ratna Dr. Atal Bihari Vajpayee.

Born on Dec 25, 1924, Atalji’s early education was assured as his father was a poet and a headmaster. Gwalior was then not politically active despite it being a kingdom. But that did not stop Atalji from being a part of the big P. He got the first taste of politics when he and leaders from opposition were thrown in prison. This was during the emergency of 1975. Later Atalji co-founded the Bhartiya Janata Party in 1980.

The nation laments the demise of the magnificent 3-time premier. He was not only the most able statesman but also a vivid poet. He was an insatiable reader and a man of great oratory skills. Atalji become a parliamentarian at a very young age of only 33 years. This, sharing the house with leaders like Jawaharlal Nehru, Jayprakash Narayan whom he looked upto for inspiration. He saw Indira Gandhi at work too, whom he had great respects for. He had even openly called her Goddess Durga after the liberation of Bangladesh in 1971. Under him his party  swam through a lot of crests and troughs. This, BJP is the only party to emerge today as the single largest party with a nation-wide appeal.

One of the most distinguished and remarkable characteristics of Atalji’s eminent persona was his eager respect for all his friends and opponents alike. Be it applauding Indira Gandhi for her stand on Bangladesh or paying respects to Jawaharlal Nehru; being his senior in politics. In his famous speech in the parliament he pointed out how a portrait of Jawaharlal Nehru was missing from the gallery of the parliament building. After him questioning the same it was reinstated. This speech sparks a feeling amongst the citizens that this is how a democracy should be. Members of the parliament should not work against one another rather with one another. Atalji was the torch bearer of this practice. Atalji displayed the long lost value of co-operating with other parties on a common agenda of nation building.

Unity For The Nation

He believed in walking hand in hand rather than pointing fingers at each other. Because of this attitude he scaled the political ladder very fast but there were efforts made by his political opponents to dislodge him through rumour mongering about his being hand-in-glove with top leaders of the ruling Congress party. But nevertheless, the able statesman worked his way through tough times and carved a niche for himself in the history of India which can ever be replaced.

Atalji’s able acumen won hearts in the opposition party so much so that he was awarded the Padma Vibhushan by the Congress-led Narasimha Rao government. This is an unusual thing to happen because no party will honor a leader of a rival party. But such was Atalji’s charisma. In the Narsimha Rao government he was also appointed as the leader of the official Indian delegation to the United Nationa Human Rights Commission at Geneva in 1993. This responsibility came at a time when India was held questionable for the human rights violations in Kashmir.

In his heydays, Atalji’s gift of gab attracted praise from everywhere including from Jawahar Lal Nehru. His skills could only be matched only a few leaders. Nehru even predicted his future as a prime minister. Even when he was ageing, Atalji’s pauses while giving speeches, a habit which was widely ridiculed became his own unique trademark.

Atalji’s gift of gab led his way to his wide acceptability amongst the masses. His Tibet speech is till date considered the best ever delivered on the floor of the House by a member. In his speech he pointed out (and subsequent events proved that this apprehension was correct) that ‘the whole aim of China is to reduce the Tibetans to a minority in their own country and destroy the Tibetan personality. It is a new phenomenon, a new type of imperialism’.

While he grew as a politician, his stature as a leader grew by leaps and bounds during his prime ministerial stints. Though he was a parliamentarian for nearly forty years, he had his first tenure as a prime minister for mere 13 days. Then the second term went full which elevated him to a firm position of grand leaders. He remains one of the most suave statesmen the country has till date.

As A Prime Minister

As a Prime Minister Atalji’s term was rife with instability, if not coup. In the first term for 13 days it became clear that his government would not be able to sustain. Thus, Atalji resigned and fresh elections were held. The next elections also put the BJP-led National Democratic Alliance ahead of everyone else.

Atalji again led the government. Thanks to a tea party hosted by Subramanian Swamy, Sonia Gandhi and the now deceased J. Jayalalithaa came together in an unofficial alliance of sorts. Jayalalithaa’s All India Anna Dravida Munnetra Kazhagam pulled its support from the center. The Government collapsed again. However, Vajpayee continued to remain the interim prime minister while the nation got ready for third nation-wide election in less than 5 years. The year 1998 changed the fortunes for Atalji as a Prime Minister.

Then in the month of May 1998, India announced that it had successfully conducted five underground nuclear tests in Pokhran desert. This was 24 years after it had first conducted them in 1974. These tests made the world sit up and notice the power that India was about to become. Political luminaries from all over the world were shaken out of their slumber by the enormity of news that had hit them.

The Western Countries And Impositions

The famed West, including countries such as United States, Canada, Japan, Britain and the European Union reacted in the most knee-jerk fashion possible by imposing sanctions on India. Atalji had anticipated these actions and hence did not buckle under pressure.

The second blessing in disguise for Atalji as a Prime Minister was the Kargil War. India had to launch to a full-scale war against its neighbour because of its continuing mischief. The war followed an earlier peace process pushed aggressively by the then Vajpayee government.

However, as early as June 1999, the army took charge of operations in Kashmir and managed to successfully push back the infiltrators as well as the Pakistani army. This boosted the image of Atalji as a strong leader and a statesman who was not afraid to take a tough decision in the face of adversity.

A Boost To BJP

Both the events helped in shaping the future for BJP as it won 303 out of the 543 seats in Lok Sabha and formed a stable Government. The Government had a pretty good run until the riots of 2002, when Atalji’s lack of strong inaction on the then Gujarat Chief Minister Narendra Modi hampered his secular image. The party took a beating at the hands of Congress in 2004 and was drubbed very badly. Shortly thereafter, the parliamentarian from Lucknow announced his retirement from active politics and has been nursing bad health ever since.

During his stable premiership he achieved many accolades, the main highlight being the his pet projects the National Highways Development Project and Pradhan Mantri Gram Sadak Yojana. The Golden Quadrilateral Highway was his vision. Apart from this, Atalji introduced many domestic economic and infrastructural reforms, including encouraging the private sector and foreign investments, reducing governmental waste, encouraging research and development and privatisation of some government owned corporations.

The UPA Government on 1 July 2013 accepted before Supreme Court that National Democratic Alliance Government led by Atalji has developed half the roads in last 32 years in their 5-year term.

Not just oratory skills Atalji’s poems too inspired his followers. His poems “Haar nahi manunga”, “Naye meel ka patthar”, “Aao phir se diya jalayein” are popular even today and his creations will continue to be a guiding light for his readers. With regard to his poetry he wrote, “My poetry is a declaration of war, not an exordium to defeat. It is not the defeated soldier’s drumbeat of despair, but the fighting warrior’s will to win. It is not the despirited voice of dejection but the stirring shout of victory.”

A Humble Human Being

A humble human being, a strong suave statesman, a vivid poet and a great orator, Atalji has left a legacy which only politicians with higher nationalist values will endeavour to follow. His political career will still remain unmatched being a person who devoted his whole life for the country and for its betterment.

Whilst grieving Jawaharlal Nehru’s death Atalji said “With unity, discipline and self-confidence we must make this Republic of ours flourish. The leader has gone, but the followers remain. The sun has set, yet by the shadow of stars we must find our way. These are testing times, but we must dedicate ourselves to his great aim, so that India can become strong, capable and prosperous …”

Today these lines prove to be apt for the speaker himself as the nation grieves the loss of its most beloved Prime Minister Atal Bihari Vajpayee who stayed true to the meaning of his name “Atal” in both good and testing times alike.