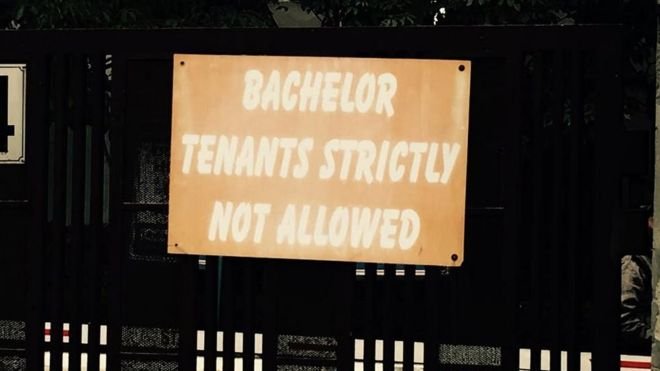 Bachelors Not Allowed ! – The Struggles Of Finding A Place To Stay For The Unmarried

The train silently crawls into the sleepy station at 6 am in the morning. As the boy standing at the door of the train looks on, he sees everything differently in this new town as compared to his hometown. The auto rickshaw ride through the city is filled with thoughts. Of what would be accomplished in this new city, with the new job and the new found freedom. As the auto screeches to a halt near the designated address, the boy is welcomed with a majestic gate that holds a banner in bold. The three magical letters stare at the boy in the early morning sunshine, “BACHELORS NOT ALLOWED”.

This is now a common sight with most housing societies in major cities of India. Its kind of a sin to be a bachelor in a big city and not have your own place to live in. Since a decade, the housing prices in India have gone up like a rocket, rendering it difficult for most folks to buy homes in metro cities. The volatility of a non stable job does not help either. You can think of buying a house but you will always wonder what would happen if you have to move domestically or internationally. What really bothers the mind is, who made this rule? What were they thinking and how did they manage to get past the basic rights of someone to ask for residence in a city?

Bachelor Tenants And Their Common Vices

We all know how the picture is usually portrayed for a bachelor tenant. That they are automatically supposed to have drinking and smoking habits. Now for the longest time since I can remember, smoking and drinking are considered bad habits. These are just choices that the person has made. Good or bad, they are equally aware of the consequences. But society has pronounced them as vices that are no less than possessing an automatic rifle. Ergo, when you are a bachelor, you already have the stigma of being guilty of these vices. Even if you do not actually indulge in them. You must be at-least thinking of them. Hence guilty as charged.

A few days ago, I was traveling by car pool and overheard two men talking about how they kicked out bachelor tenants. The three most absurd reasons you can imagine are below listed. (I swear, i am not making this up. These are real life events)

Bachelor tenants of flat no.X do not sort out their garbage. They have just the one dustbin. It interferes with our dry and wet waste management system and the whole society has agreed that this is an issue.

Bachelor tenants of flat no.X smoke in the balcony. The smoke from the cigarettes are bad for the health of kids who stay above and below the said flat. So with the rising health concern in mind, they must vacate the flat.

Bachelor tenants of flat no.X have 3 cars and only two parkings. They have been using an extra parking of the flat next to them. This is an offence as per the society rules. So they must pay the fine for extra parking and vacate the premises by month end.

Well, so much for “Vasudhaiva kutumbakam”.

How is it, that when you as a bachelor try to rent an apartment, that all hell breaks loose?

And when the same bachelor buys a place all on his own, that it is perceived as a sign of prosperity and independence?

As per the laws that I could look up online, a managing body or governing committee that is formed when the society gets registered can only make laws for domestic issues. However, there is no law that allows them to decide what kind of tenant the flat owner can keep in his apartment. Every citizen has a right to reside at a place he deems fit and discrimination on the basis of religion, caste, sex, eating habits or marital status are not allowed. This is actually mentioned directly in the Co-operative societies Act that is active in all states of India. What if the governing body of a society tomorrow declares themselves an independent country that will have its own currency and own capital?

Hence, this illogical craving to formulate laws for the “benefit” of the society has to stop. Most working professionals are bachelors/spinsters who have just started life after college. Its unfair to make snap judgements on the basis of a couple of bad experiences that people have had. Else someone will have to come up with a separate area in every city that will have two regions of their own: Bachelorland and Spinsterland.

Everyone will be singing the song from the movie Gharonda: