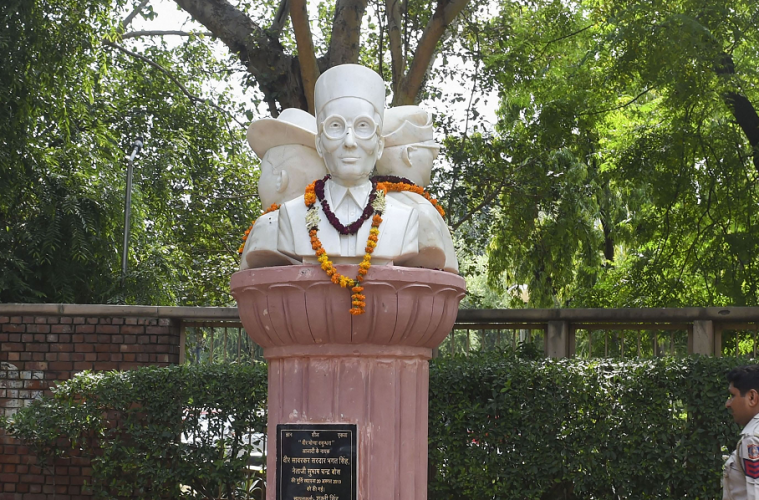 It’s that time of the year when Delhi University Student Union (DUSU) election fever is at its peak. For the students of Delhi University (DU), this period holds special significance. These are the most tumultuous and celebratory time of their academic year. Every year, there are new slogans, new faces, new promises and new battles among the students. This war is often openly aggressive, subtly casteist and occasionally downright dirty, just like our general elections. And amidst this, the parties to this election gets an important issue to fight for and against – Veer Savarkar.

This year is no different. Very recently, a new statue of Veer Savarkar was installed along with that of Subhash Chandra Bose and Bhagat Singh. Now, Savarkar is not really a favourite freedom fighter of leftists and liberals. Heck, they don’t even consider him a freedom fighter. Thus the move of installing his statue did not go down well with the left wing of DU The National Students’ Union of India (NSUI). And to express their displeasure and anger, NSUI’s president Akshay Lakra led a group of his party workers and blackened the statue of Veer Savarkar and put a garland of shoes around his neck.

As expected, Akshay Lakra started receiving threats through calls and messages. Thus he filed a police complaint at the Parliament Street police station. At the moment the bust is removed from the campus.

What Is This About?

The entire frenzy started early in the week. The outgoing DUSU president Shakti Singh of the Akhil Bhartiya Vidyarthi Parishad (ABVP), installed a statue in front of the Arts Faculty on Tuesday. This statue consists of the busts of Veer Savarkar, Bhagat Singh and Subash Chandra Bose. The issue cropped up from the fact that the ABVP did not have the required permission to install the statue. Following which a notice was issued to Shakti Singh. ABVP cried foul, stating that the administration’s red-tapism and the delay in giving permission was to demoralize the students’ union. Shakti Singh said that the statue was installed to instill feelings of nationalism and patriotic fervour in the hearts of the students. Interestingly enough, many members and post holders of ABVP have distanced themselves from Singh’s illicit installation of the statue.

NSUI and the left leaning All India Students’ Association (AISA) criticised ABVP for placing Savarkar’s bust alongside those of Bhagat Singh and Bose, and called it a move based on fake nationalism. Both the parties were of the opinion that Savarkar was a colonial sympathizer and had shown loyalty to the Britishers at many points of time in the nation’s struggle for independence. Most notable of them being the refusal to support the Quit India movement.

NSUI’s Taking Matters Into Their Own Hands

A day after the statue was installed, Akshay Lakra posted a video in which he is seen garlanding the busts of Bhagat Singh and Bose and removing garlands from around Savarkar’s bust. As the video proceeds, Lakra defaces the bust with black soot and attempts to adorn it with a garland of shoes while a security personnel is trying to stop him. NSUI insisted in a statement that the other two revolutionaries were warriors who struggled for Indian independence and gave their lives for the country in a clear war against the British powers. While Savarkar chose to cower away behind mercy petitions.

ABVP, while distancing itself from Shakti Singh’s actions, termed Lakra’s actions as heinous and a show of disrespect to a great freedom fighter. In a statement released after the video went viral, the RSS backed party said that NSUI’s actions reflected the disrespectful and antinational sentiments of their parent organisation, Congress. It is noteworthy that Congress leaders and Prime Ministers have, in the past, criticized Savarkar on various counts.

The most prominent of all times being when Jawahar Lal Nehru had him arrested on suspicions of being linked to the assassination of Gandhi. ABVP registered a complaint against Akshay Lakra at the Maurice Nagar police station for defacing the statue. They also allege that his actions can cause a law and order situation in not only New Delhi but also across the country.

DU Proctor Neeta Sehgal states that she has assurance from ABVP that the bust will remain uninstalled until proper permissions are in place. ABVP too, says that it would shift the busts. With regards to Lakra’s actions, Shakti Singh declared that the insult of Savarkar would not be ignored; and that “there are other statues in the country”. Politicians from some parties have also commented on the matter. While Tej Pratap Yadav criticised ABVP for attempting to saffronise the campus, Shiv Sena chief Uddhav Thackeray demanded that those who do not agree with Savarkar’s politics be beaten up in public as punishment. It is a reminder of 2004 when his father had made similar comments in response to Congress’ insult of Savarkar by removing plaques containing his quotes from Andaman’s Cellular Jail.

Social media too, is picking sides over the issue. Some laud Savarkar’s contributions to the freedom struggle and hail him as a great freedom fighter, While others call him a mercy petition seeker and colonialist who supported Britisher’s subjugation of India, and sought to make an anti-woman, anti-Dalit document the constitution of India. Meanwhile, some have also suggested that the ABVP is sticking to the matter to cover up their own mistakes.

What Significance Does This Hold?

Many political thinkers have raised the question of what this incident means for Congress. No doubt the party is weak right now. As the ideological parent of NSUI, the Congress certainly comes to the fray as answerable. Especially when one considers the past enmity between the party and Savarkar’s legacy. Indeed, the only Congress Prime Minister who was not against Savarkar was Indira Gandhi.

However, this incident looks to be able to do little to revive the party’s fortunes. The party is in frenzy because of P. Chidambaram’s pursuit and arrest. Additionally the incidents that have followed after his arrest have been pretty embarrassing too. Moreover, the working committee’s choice to elect Sonia Gandhi as the party president again has drawn heavy criticism. The party’s leaning upon the Gandhi-Nehru family for leadership at the cost of ignoring other leaders as always is under fire.

Talking about Savarkar issue at this moment is not going to change anything for Congress at the moment. They have a lot on their plate to deal with. And a wrong foot is the last thing they would want right now. It is already difficult for ABVP to answer the questions about illegal installation of Savarkar’s bust. Even the party members are not supporting Shakti Singh in this matter. Pick up the right issues and right fights.

The incident holds greater significance in the upcoming student elections, scheduled for 12th September. NSUI will look to capitalize on the entire frenzy and ride on the fanfare around the incident even though their position as the party that defaced the face of a freedom fighter is precarious. ABVP, on the other hand, seems to be using the statue to cover up their failures in the previous years. Thus, it is also aiming to use their opponent’s aggression. It is not clear yet if this entire episode will affect national politics or Congress’ fortunes. But the ripples of this episode shall surely be reaching in the last stages of campaigning for the DUSU elections.