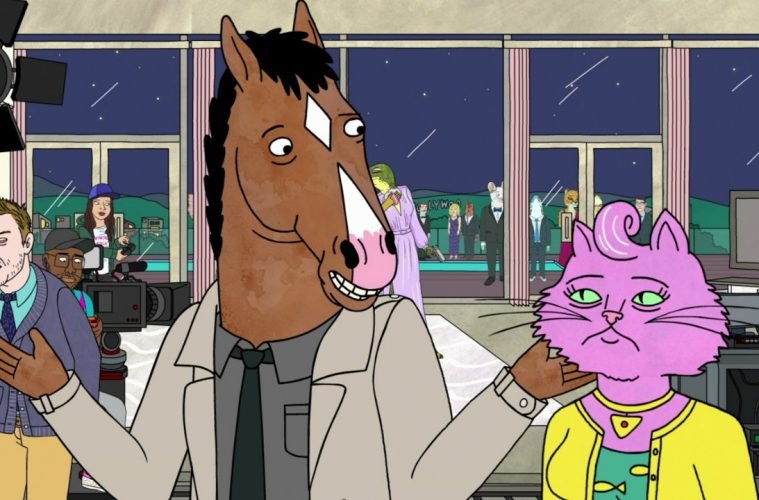 Bojack Horseman Season 5: You Say You Want To Get Better, But You Do Not Know How

“Nothing’s lonelier than a party“, quips Bojack Horseman right after feasting his eyes to sultry dancers. That is how the much-awaited Season 5 of this show that has not been horsing around, begins. It reminds me of the day the trailer was released. I had so many terrifying questions: why does Todd have a hand for a head? Why is the middle finger wearing his trademark ochre-yellow beanie? Does Princess Carolyn finally find happiness? If Bojack still ruins everyone who cares for him, does he also hurt Hollyhock? Is Diane’s still going to be a righteous but deeply flawed virtue-signaller?

The questions died soon, but Diane’s words kept haunting me for a long time. You say you want to get better, but you don’t know how. (Don’t we all?) That is, until I finally watched the shit out of the 12 episodes. If you are watching season 5, chances are you are a fan of the show already, so there is no use describing it with generic terms like I previously did. Yes, this season was all of those adjectives put together: subtle, nuanced, crisp, emotional roller-coaster, daring, laden with dark humour etcetera. It still has those crass comedic punches. Heck, this season goes a step further and makes direct jokes too! For a show that is now known (famously and infamously) for its crass humour, and use of the risque genres: dark comedy, surreal comedy and cringe comedy, a taste of the linear old-school jokes is revolutionary!

Here is an example: Stefanie, whose content website Diane writes for, takes a dig at her own self: “I am in a fully-immersive 3D spin class, oh, you know what? I’m just biking!” She doesn’t ask Diane when she is submitting her next piece, instead she goes, “I need younger words, newer words, fresher words to feed the insatiable beast.” This came in soon after a machine was introduced as the manager of a human. One episode in, and we knew we are in the Bojack universe.

By now the characters have settled into their habits. So while on an existential level, we are all still figuring out who they are, on a superficial level we know who Diane Nguyen, Mr Peanutbutter, Todd Chavez, Princess Carolyn are. This makes it the perfect time to dig into their back stories. At this point, I have to give it to the creators and the writers’ room: they are shooting the cop show Philbert within this show, and the premise overlaps. Philbert has uncanny resemblance to Bojack’s life. Todd’s life is still a chapter straight out of the surreal comedy cheatbook. Having come out as asexual, his adventures are now less influenced by Bojack’s actions. Good for him, he flourishes! 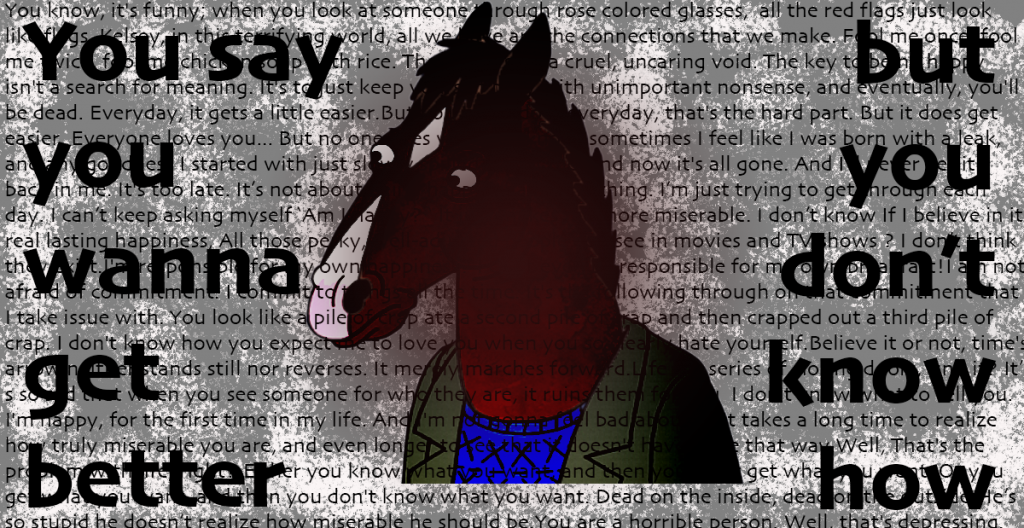 Not willing to give away too much, because words would not do justice to the show anyway, I will just dig deep into ‘that‘ episode of this season. You know, every season has THAT episode. The one that keeps you on your toes. The one that you cannot get away from. 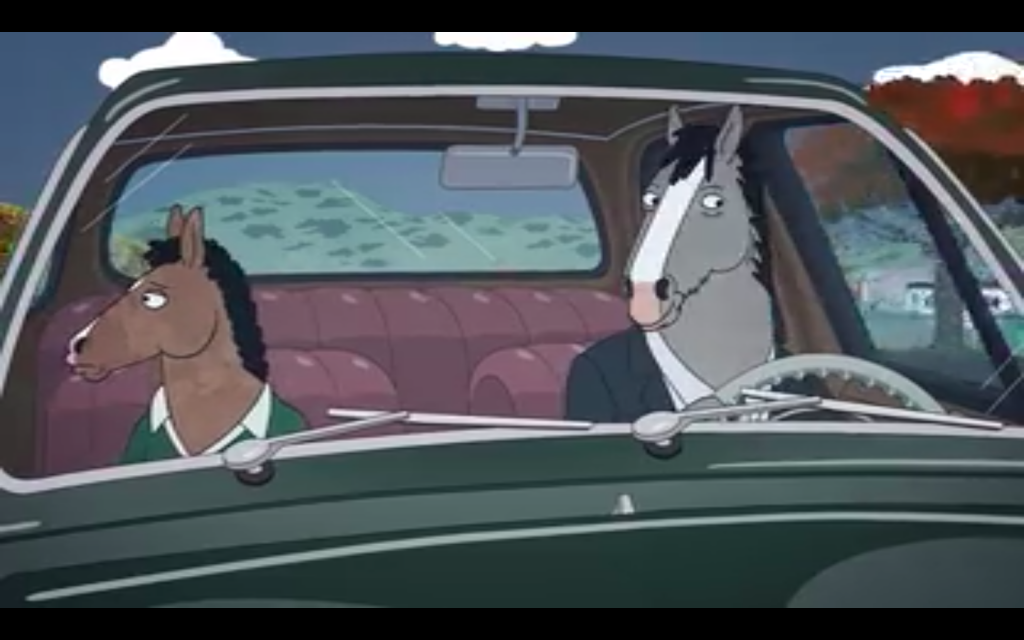 Free Churro is the 6th episode of the season, and begins with a flashback, or what is called a “When it All Began” trope in television lingo. It opens to a shivering Bojack being picked up by his dad whose response to a warmth-yearning Bojack is, “Yes, yes, I see you, get in, get in.” The next few minutes are hard. Bojack’s dad is driving the car with a young Bojack riding shotgun. He constantly frets and fumes about his wife, Bojack’s mother. He begins with, “Your mother’s having another one of her episodes”, intersperses it with “Sooner or later you’re going to learn that no one else is going to take care of you”, and ends it with an overbearing demand of a ‘thank you.’

We hear him, loud and clear, but then we hear Bojack Horseman for 20 minutes, as he gives a eulogy for his mother Beatrice who we’ve previously seen as an abusive parent and later as a fading dementia patient who told Bojack a while back that he will always remain broken.

A eulogy for the dead, a humble brag of the free churro, and a lesson in grieving

It is 20 unalloyed minutes of Bojack being vulnerable, grieving for a flawed parent. It is also quite possibly the only moment you’ll sympathize and empathize with who Bojack is, as a person. Bojack got a free churro because his mom died. Even sans any context, it is easy to pick apart the absurdity of the world we inhabit. Who would’ve thought a churro would a great segue to a eulogy?

Amid Bojack’s cruel jabs and jokes, it makes you question if it is possible to recover from such neglect? Is it ever possible, you ask, to forgive the years of hurt? Is it, more importantly, even worth it? How do you say these words and mean them: “my mother is dead and everything is worse now.”

Bojack also digresses briefly into the meaning of love. It isn’t the grand romantic gestures like they show in TV and movies. It isn’t messing everything up and redeeming with a larger-than-life apology. “You need to do it every day which is so…hard”, Bojack sighs at the funeral audience, but mostly at himself because he is incapable of acting upon what he already knows.

(Spoiler alert for the Episode 6 in this paragraph) Bojack mentions his mom’s last words were ‘I see you.’ A large part of his eulogy was making sense of those words. But those damn writers had something else in mind. Two tropes in one, it is later revealed that the writers played a pet the dog, making Beatrice look like she maybe loved Bojack after all, but subverted it when they revealed she was only reading the sign: I.C.U.

If it were up to me, I’d give all awards to the writers (and Will Arnett) for this monologue alone. How many times can you repeatedly get punched in the gut within 20 minutes? I’m sad because of the monologue yes. But I’m possibly sadder that nothing, as a spectator, will come close to this vulnerable and crooked way of grieving.

Love and Other Drugs

After all the emotional turmoil, 20 minutes of excruciating agony, the episode pulls the rug from under you and leaves you probably in a riot of laughter. This plot twist trope isn’t new to the Bojack brand: even in the underwater episode, it was a hilarious slap in the end. So we don’t know whether or not it was an emotional catharsis for Bojack, but the way life has always turned out, the twist must have made him feel right at home when he opened that casket.

Diane’s anachronic adventure in Hanoi to reconnect with her roots wasn’t the first time Bojack was looking at a non-linear narrative, but it was certainly one of the more moving ones. Diane’s monologue comes a close second favourite moment in the season (Episode 2: Dog Days are Over):

“And it breaks your heart again, after your heart was so broken that you thought it could never get any more broken. You thought it was safe but it still somehow finds a new way to break. Because even though you’re the one who asked for this, now that you’ve got it, you’re completely adrift with no compass or map or sense of where to go or what to do so you go to Vietnam. You think you might find community, a connection to something bigger, but you don’t .in fact you feel even more alone than before you left. But…you survive. You learn that you can survive being alone”

#MeToo for everyone #HeToo for Bojack

The show does not bring any reference to the #MeToo movement. Instead, they talk all about the issue without the burden of the label. Look, here’s where it gets complicated. We know Bojack is a troublesome protagonist. And to do right, we cannot forgive him. We know him enough to want to, but we cannot. And that’s a dilemma worth ruminating over.

This town is full of hypocrites. They act all shocked when one of their favorite stars turns out to be a dirtbag. But they can’t wait to give a comeback to all the dirtbags we already know about.

I don’t think that he can make things right. Can’t you just admit to me, just between the two of us, that this sucks? You can say its your job, that you believe in forgiveness, whatever. But don’t you at least a little bit think that when we let guys like Vance off the hook, when you, as a woman give awful men the cover of your friendship, when you work for them, first of all, they’re not gonna get better. Second of all, you are then complicit, no you’re culpable for the terrible things they do.
Just woman to woman, can’t you just admit this is screwed up?

They bring up the New Mexico incident in such a sly manner, it is genius.

No one ever tells you that when your mom dies, you get a free churro

Amid the thicker plotlines and layered tropes, the writers throw in something really heavy nonchalantly, and you have no option but to pause and have a mini-existential bout. Consider these, in isolation, or within context:

Undeniably, there are bits in the season that may feel unnecessary and unnecessarily complicated, but as PC would say, “it is confusing which means the show is daring and smart.” But we also have Todd Chavez telling us that this is the exact amount of complication he can handle, as long as things don’t become one bit more complicated. Same Todd, same.

In Season 5, the show has gone for therapy, both literally and metaphorically. With a eulogy that’s unorthodox, angry and perhaps a rant, the show has shaken the boundaries yet again, this time of dealing with the grief of a loss that will only ever be fully understood by those suffering.