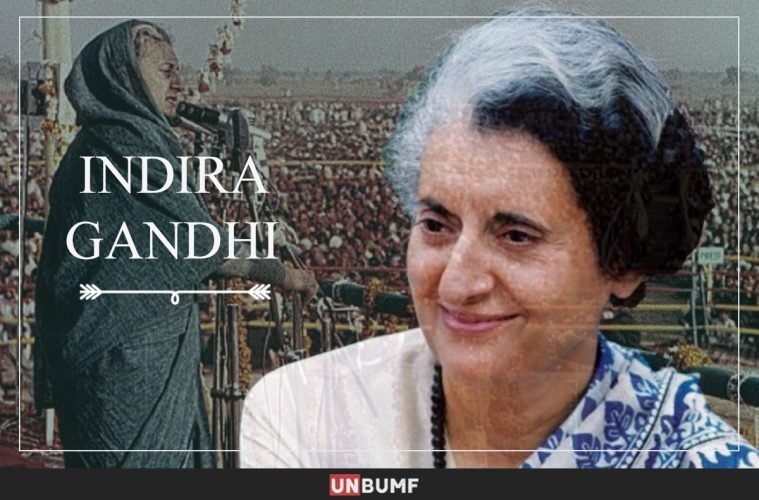 19th November 2018, is the first female Prime Minister of Independent India, Indira Gandhi’s 101 birth anniversary. Today, we take a look at her journey from being a ‘Goongi Gudiya’ to the Iron Lady of India.

In 1964, Indira Gandhi was elected to parliament as Minister of Information and Broadcasting in the Shastri Government. However, Lal Bahadur Shastri mysteriously passed away in Tashkent on 11th January, 1966 and young Indira was next best choice to form the Government. The reasons were simple. Congress needed a rallying point across which various warring factions could unite. It also helped that being young and inexperienced, Indira was easy to manipulate by Congress veterans like Kamaraj and Morarji Desai. Morarji Desai became the Deputy Prime Minister and Finance Minister under the new Indira government.

With no prior experience in politics and nobody to support, Indira set off on a path she had no clue about. The initial months into her politics were a disaster. Under constant criticism by the media, she got the label of ‘Goongi Gudia’ and a mere puppet in the hands of powerful Congress leaders. 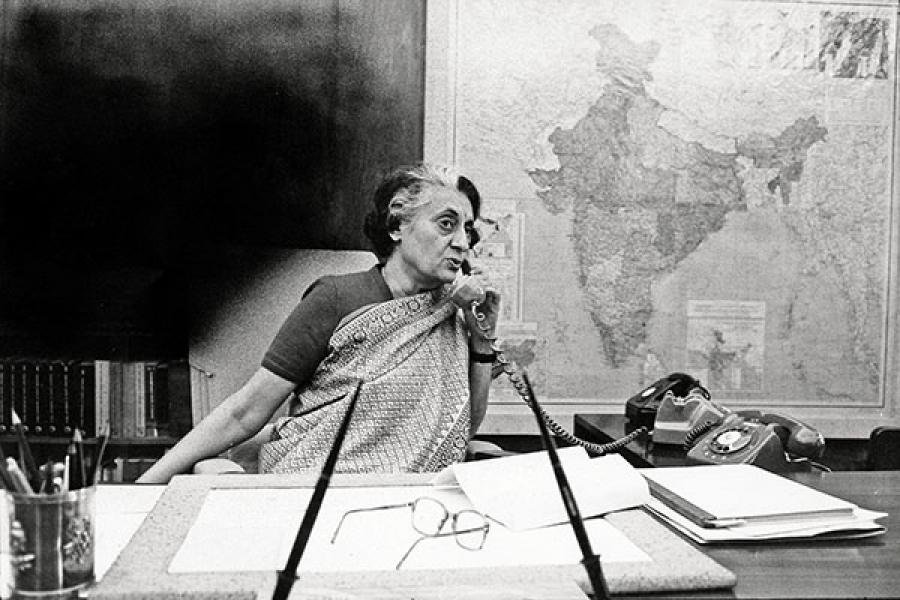 Indira started her career on a negative note and the first major decision made by her backfired.

India was seeing yet another famine. Our Trade deficit was Rs. 930 crores and going was tough. India applied for U.S government’s food for peace program under which nations like India were eligible to procure food-grains and pay in their domestic currency. US under President Lyndon B. Johnson disbursed approximately 16 million tonnes of wheat and rice to India but in return wanted swooping economic changes. Pressure was built from world bank as well as IMF. 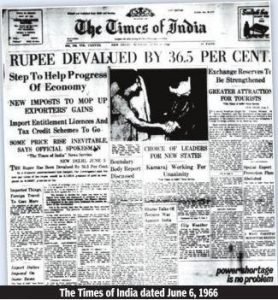 On the fateful day of 6/6/66, rupee fell down from Rs. 4.76 per dollar to Rs. 7.50 per dollar which was a whopping 36.5% decline. There was an intense state of critical disequilibrium and the first significant balance payment crisis. Military budget  was already up steeply after the loss in Indo-China war. The move was a grave error due to the conditions of inflation, unemployment and food crisis. But devaluing money was a hasty step. The value would have anyway depreciated but slowly. The consequence of which is that India has not been able to sustain itself since then.

In Indira’s defense, Lal Bahadur Shastri Government was aiming for the devaluation of the rupee. But the decision was postponed and was laid upon Indira to take.

This decision, however harmful, strengthened Indira’s position in the Government. Now known as one of the most fearless women, Indira started to make decisions for herself. Following which she was even asked to leave the party. Indira again contested the elections but could not attain majority. But with regional parties like DMK, Indira came back to power. This time without any shackles.

Indira’s rise to power and her second mistake 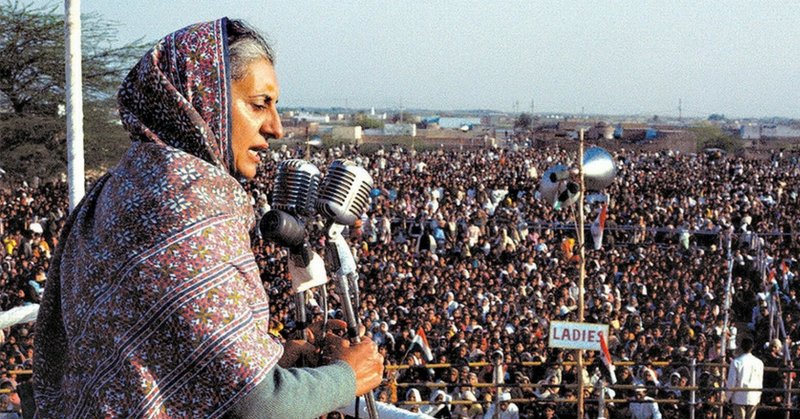 Indira was very close to the poor Indian households. With her ‘Gareebi Hatao’ campaign, it all went to the next level. In 1969, Indira Gandhi took another drastic step – banning of corporate financing of elections. This idea had a clear motive in sight. This amendment broke the link between rich businessmen and politicians as far as financial aid was concerned.

The motive was to deprive the opposition of financial support. This made “briefcase politics” a norm in the Government. This move eliminated the most important legal source of campaign finance. At the same time, rise of fighting an election kept on going up due to rising population and increased competition. The number of political parties has increased from 55 in 1952 elections to 464 in 2014. This lead parties to a competitive search of underground funding and they played right in the hands of racketeers and mafia. From funding and political patronage, they wanted a piece of cake by getting in the political system. If you ever wondered why your politician is a criminal, this will be one of the biggest reasons.

The Rajiv Gandhi Government did realize their mistake and cleared the ban. But the damage had been done. Everybody had tasted the power of money without any accountability. The aftermath of this decision still haunts India.

Green Revolution and Nationalisation of Banks

Indira Gandhi’s career and choices could be debatable. However, the woman that she was, isn’t! Indira’s economic policies are sometimes considered to be savage. As soon as Gandhi rose to power, there were a lot of things that were going on the country simultaneously like the Indo-Pak war of 1965 and the revolt in Mizoram. Also, there was food crisis because of frequent droughts. Under those circumstances, as well, Gandhi did what she thought was the best. In 1966, India imported its largest seed order. And hence the green revolution was kick started. Gandhi presided over three five-year plans as well. 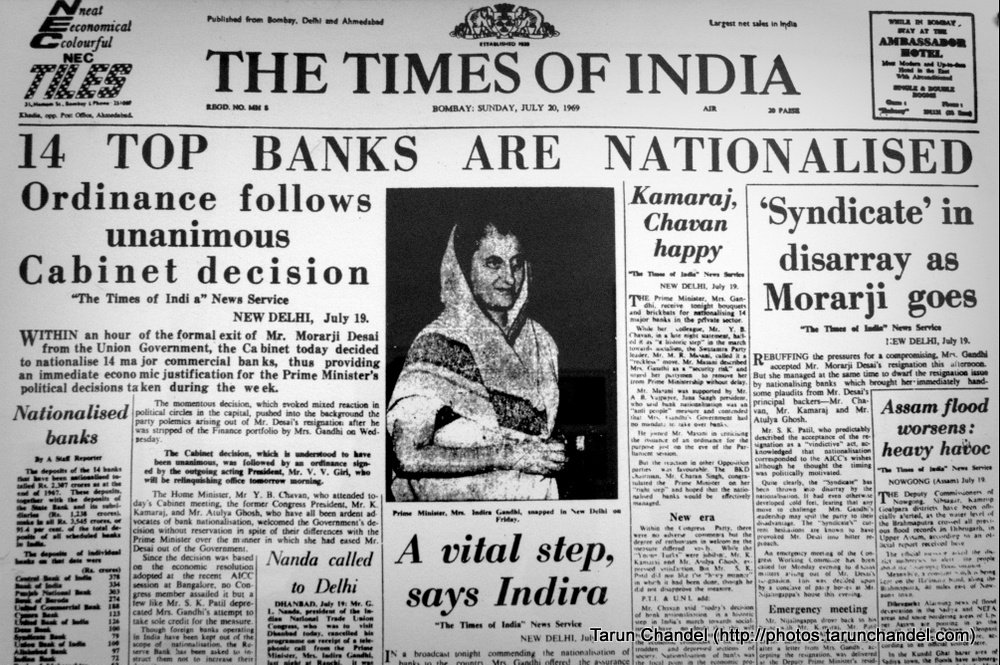 In the same year, Gandhi made the decision of the nationalization of banks for which coming generations should be thankful. People at that time where being ripped off their money by private banks which used to regularly flee after taking their savings. With RBI having no control over the situation, things were only getting majorly out of their hands. With this scheme, 14 banks were nationalized and brought under the Government itself. Furthermore, with low-interest rates, people could at least confide in the Government and be sure about their money.

As far as the economic growth is concerned, Indira Gandhi’s government did show improvement. The per capita income although remained less than the Asian counterparts. Inequality was the lowest in Indira Gandhi’s era. But poverty was still at large; more than what it is today. Whether Gandhi was a boon or a bane in terms of economic conditions of the country is difficult to say. It wasn’t perfect in all spheres. But it was still progressive.

Realpolitik is a form of politics wherein the person believes more into practicality rather than the modal or idealistic approach. Many of her decisions are based on realpolitik. The Soviet Union and Pakistan were getting close after the 1965 war which led Indira’s Government to take the decision of being neutral during the Sino-Soviet war. The Soviet Union quickly made changes and decided to side with India as the United States and Pakistan showed increasing levels of proximity. This was helpful in the war that was closely coming nearer.

The 1971 war between East Pakistan and West Pakistan not only created an independent state but also showed how Indira Gandhi had progressed in her career. India’s main aim in the 1971 war was to get involved but not intervene. To attain that, India happily helped the 11 million refugees. However, when Pakistan started doing rounds of preemptive strikes in the western region of India, India declared war on West Pakistan. 30,000 prisoners of war were taken in by the Indian Government, and given in return for the return of Majibur Rahman.

The decision that Indira took that day could have changed the scenario today. Those Prisoners Of War could be useful to settle the fight for Kashmir. Thus saving the coming generations from bloodshed. But instead, she chose the release of Rahman, without whom the present Bangladesh would have been directionless.

Indira started gaining a foothold on the power so much so that she knew no bounds. But the lowest time in her career came when she was accused of using false methods and malpractices in the elections. For what it was, several charges were laid down against Gandhi. The Allahabad High Court convicted Indira Gandhi on grounds of using Government machinery for the election campaigns. Following which Gandhi appealed to the supreme court as well. This led to the darkest era the country has ever seen. 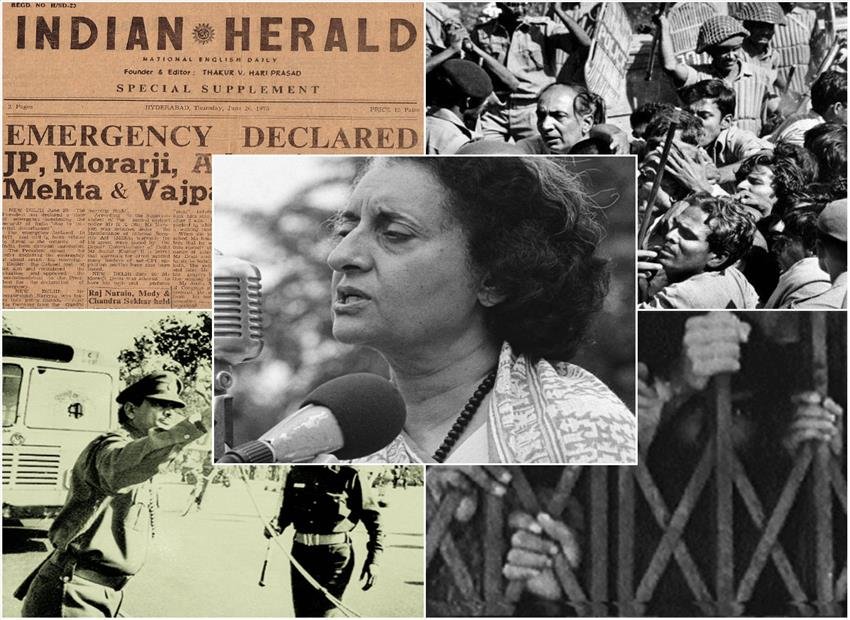 The 21 month long emergency period declared on June 25, 1975, was the darkest phase of Independent India. Period. With All civil rights curbed, arrests of prominent leaders like Arun Jaitley, L. K. Advani, Chandra Shekhar from the opposition were made. Many political parties and outfits such as Rashtriya Swayam Sewak Sangh were banned. The media was completely censored and an only Government made propaganda would be shown on the television. Sanjay Gandhi, son of Indira, held mass sterilizations under the name of family planning. People were detained under MISA and Defence Rules of India and jailed willy-nilly if they protested against this demolition of India, which was jacketed by saying that it was the cleansing of the Delhi slums.

The Emergency curbed all civil rights and for those 21 months, everything came to a halt. Now, the reasons why Indira imposed the emergency were not just personal. Droughts, unemployment, oil crisis, the 1971 war with Pakistan caused an unpreceded loss to the financial state of India. Furthermore, mass protests were being organized by J. P. Narayan against Gandhi who was afraid to lose her seat.

The Congress Government fell for the first time since independence. However, Gandhi’s phase B started soon in 1980. Indira received a personal setback when her son Sanjay died in a plane crash. She still contested the elections and pushed Rajiv Gandhi also in politics.

Operation Blue Star was a military operation under Indira Gandhi to remove Sikh militants from the Harmandir Sahib Complex. The real reason was the assassination of Jarnail Singh Bhindranwale. Bhindranwale was leading the Punjabi youth towards militancy and allegedly create an independent state called Khalistan. Operation Blue Star started on 1st June 1984 and ended on 10th June 1984. It had two parts: Operation metal followed by Operation Shop and Operation Woodrose. The Indian army raided the countryside to catch the suspects. Proper army operations took place in the Harmandir Sahib Complex and throughout Punjab. The media was again at a receiving end with a complete blackout.

While the attack on one of India’s holiest places is extremely debatable, one thing can’t be questioned – why did our political masters let the situation deteriorate to such an extent? And what was the fallout?

Assassination of Indira and the end of a generation 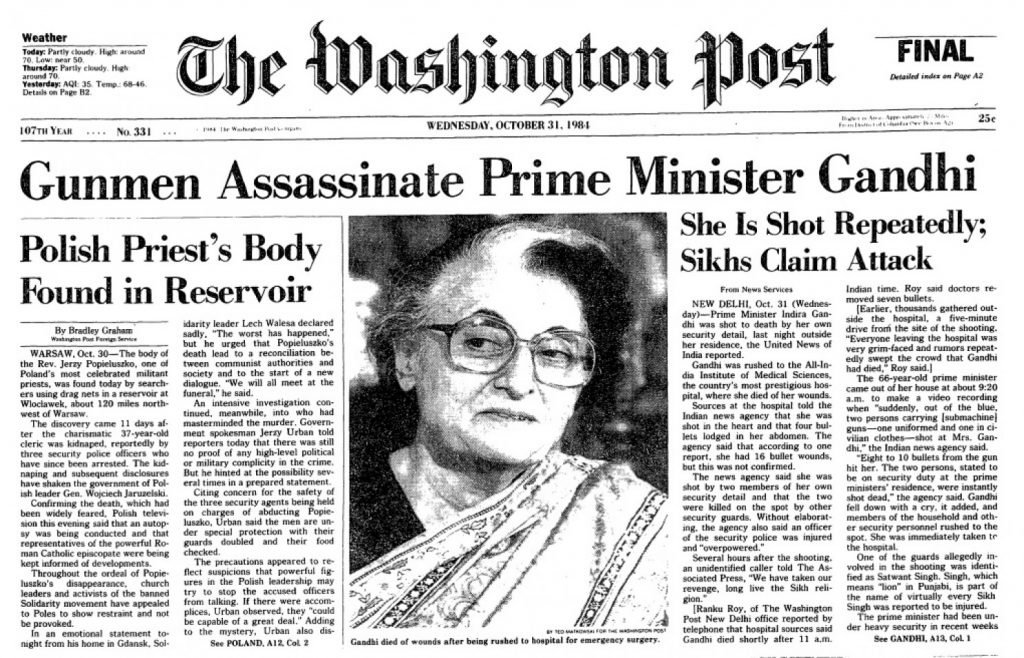 Indira Gandhi was killed by two of her bodyguards, Satwant Singh and Balwant Singh on 31 October 1984, with a total of 31 bullets were fired at her. Indira’s death led to massive Anti-Sikh riots. The rage killed more than 3,000 Sikhs. The Delhi police kept its eyes closed throughout. Congress party met local supporters to distribute money and liquor. They even provided them with ration list and voters list.

Contrary to what people believed, Indira quickly raised her game to withstand domestic and international political pressures. Her stewardship of the nation is debatable, at best. Her legacy will go down in history but for all the wrong reasons.