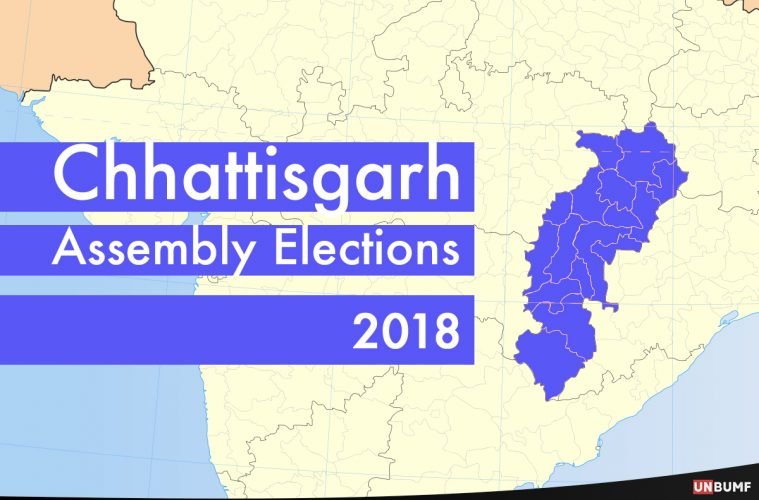 The second phase of the Chhattisgarh assembly elections has ended. The polls were held in two phases. The first phase was scheduled for November 12th. Campaigning for the final phase ended on the 18th of November. Candidates were also allowed to campaign from door-to-door. A total of 1079 candidates from various political parties and independently are battling for 90 assembly seats. A single party will require 46 seats to claim majority. 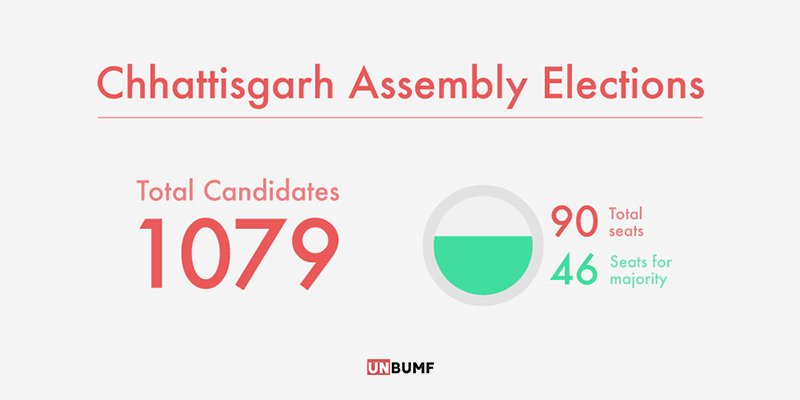 While only 8% of those contesting the elections will come out victorious, here is a list of candidates who have an edge over the rest. 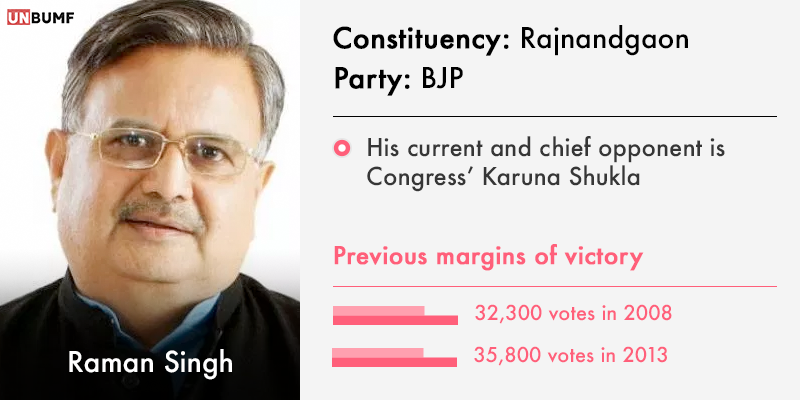 The incumbent Chief Minister of Chhattisgarh is widely popular for his work in the state. His repeated success in the assembly elections since 2008 stands as proof of his acceptance. Prior to this, the BJP had given him the responsibility of leading the state in 2003 after he gave up his central ministerial post under the prime ministership of Atal Bihari Vajpayee.

The then Prime Minister Indira Gandhi had first launched the Twenty Point Programme in 1975. It was further restructured  in 2006. Chhattisgarh witnessed its premier implementation for the development of scheduled castes and tribes under Raman Singh’s authority. He has been the face of Rajnandgaon for a long time now. Previously, he has overtaken the Congress candidates in 2008 and 2013 by more than 32300 votes and 35800 votes respectively.

His current and chief opponent is Congress’ Karuna Shukla. She happens to be former Prime Minister Atal Bihari Vajpayee’s niece. Shukla dissociated from the BJP and joined its arch rival – Congress in 2013. 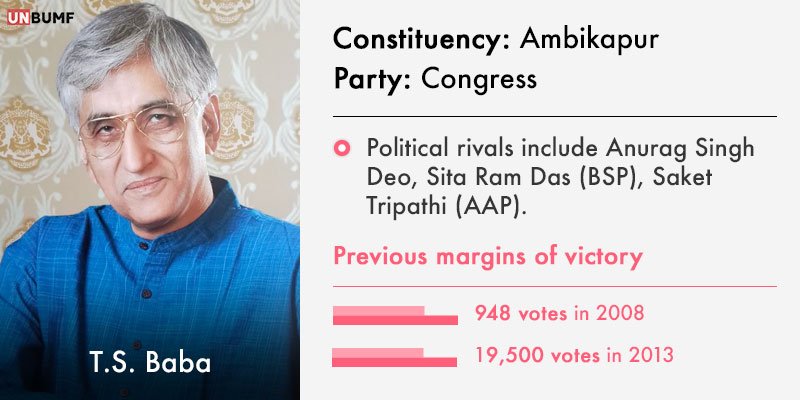 T. S. Singh Deo is a two time MLA representing Ambikapur. He defeated BJP’s Anurag Singh Deo in 2008 as well as in 2013. In the former year, he scraped through by a minor 948 votes. But 2013’s win came with a clear sweep of more than 19500 votes. This time again, his political corrivals for the constituency has Anurag Singh Deo in the list. Other major competitors for the seat are Sita Ram Das (BSP) and Saket Tripathi (AAP).

His struggle to bring his party back in power in Chhattisgarh has remained his major political aim. 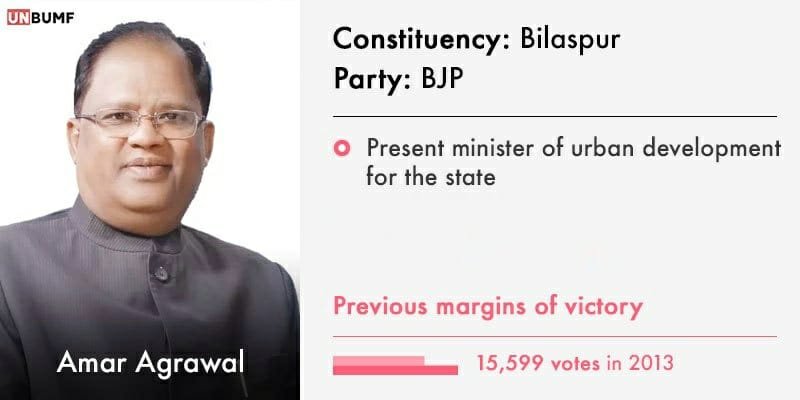 Amar Agrawal is the present minister of urban development for the state. He has remained a three time MLA representing Bilaspur. In every previous election he has outshined the Congress candidates by a considerable margin. This difference in votes leading to victory has increased with every election.

Raman Singh’s main man – Amar Agrawal hopes to convert his constituency in to a smart city. 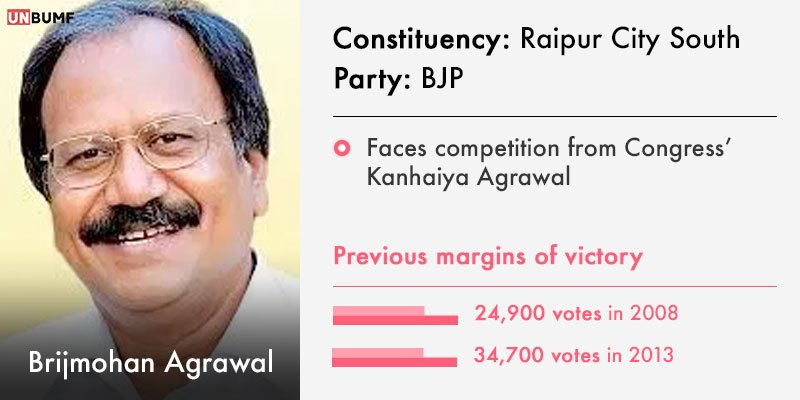 Agrawal is currently a part of the state cabinet and holds the agriculture portfolio. Though hailing from the BJP, a visible rivalry appears between him and CM Raman Singh, since Agrawal always wanted to be chief minister. He has won by more than 24900 votes and 34700 votes in 2008 and 2013 respectively. This time he faces competition from Congress’ Kanhaiya Agrawal. His other major political rivals hail from BSP, JD (U) and AAP. There are also many independent candidates in the list. But poll history shows that he may represent his constituency this time as well.

In 2013, he along with Raipur’s Mayor Kiranmayee Nayak was called to debate on a news channel. Nayak hails from the Congress and received the second highest votes in 2013. An argument broke out at the show. As a result, supporters of both parties involved themselves in a physical menace by hurling chairs and creating a ruckus. Both leaders were later arrested and subsequently released on bail. In 2017 he was also named in a land scam. 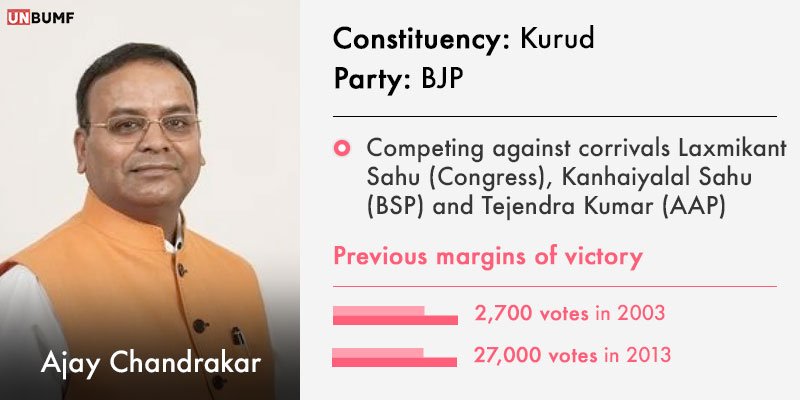 Ajay Chandrakar is competing against corrivals Laxmikant Sahu (Congress), Kanhaiyalal Sahu (BSP) and Tejendra Kumar (AAP). Kurud pushed him to Chhattisgarh’s assembly seat in 2003 and 10 years later in 2013. Though he lead by a meager 2700 votes in 2003, his 2013 win had a margin of more than 27000 votes. He required approximately 6200 votes more in 2008, but trailed.

The leader has initiated the Jandarshan Programme which aims at listening to his constituency’s grievances. He has also taken initiatives for development of tourism in the state, conservation of the environment and investment in infrastructure. 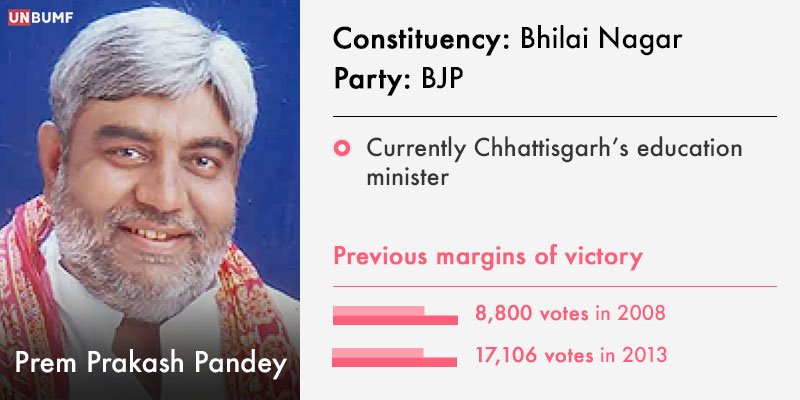 Pandey is currently Chhattisgarh’s education minister. Bhilai Nagar’s poll history shows a tug of war between Pandey and Congress’ Badruddin Qureshi. Qureshi defeated the former by more than 8800 votes in 2008. But in the prior and later election Pandey claimed the seat. This time his Congress opponent is Devendra Singh Yadav. With a different competitor we must now see how this poll goes.

Bhilai Nagar recognises Pandey for his initiatives covering youth empowerment and promotion of the Swachh Bharat Abhiyan. Additionally, his popularity among the commons may be a factor taking him towards the assembly seat. 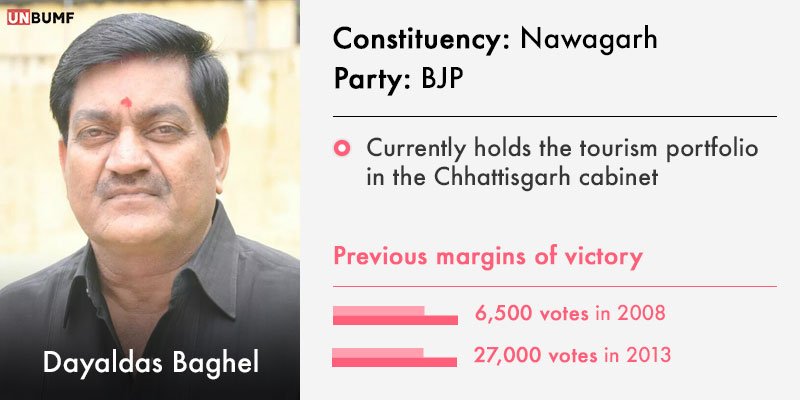 Baghel is a two time MLA representing Nawagarh. He currently holds the tourism portfolio in the Chhattisgarh cabinet. He has won against Derhu Prasad Ghritlahre by a volatile margin of 6500 votes in 2008 and 27000 votes in 2013.

The minister faced charges of snatching a poor farmer’s land in September. Apparently, his father had sold their ancestral land to a farmer more than 70 years ago and failed to register it in the latter’s name. After the farmer’s death, his son continued cultivation. But since the documents are in the minister’s name, he now exercises ownership over it.

The farmer contends that his father had paid a hefty sum of Rs. 2000 (those days) to the minister’s father for registration, but failed to complete the formalities. The minister has now returned the money and demands that the farmer must stop using it.

This issue emerging just months before the polls can have an impact on the minister’s image, but to what extent? We’ll know when the results arrive. 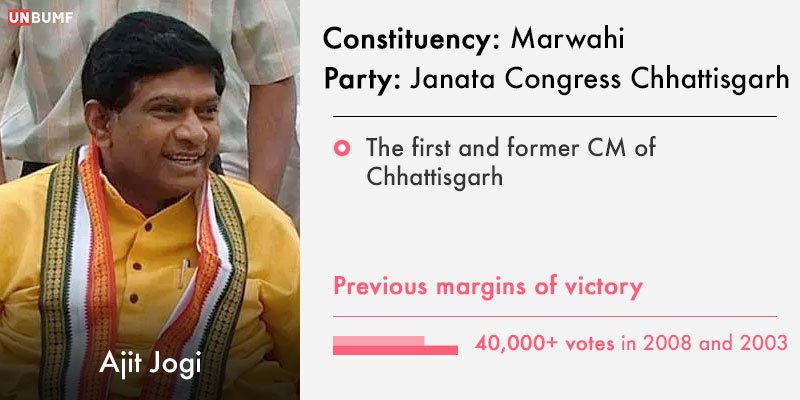 Ajit Jogi has made sure to grab a certain part of the spotlight in the 2018 assembly elections. The first and former CM was elected to the Chhattisgarh assembly from the Marwahi constituency twice – in 2003 and thereafter in 2008. Later, his son Amit Jogi contested the elections from the same constituency in 2013 and won it. Their winning margins were more than 40000 in all these years. But these victories were attributed to the Congress, since that’s where their roots are.

The duo seceded from the Congress after landing themselves amidst a pool of controversies. The party suspended the Jogis, linking them to anti party activities. Firstly, Amit Jogi was suspected of murdering the party’s treasurer – Ramavtar Jaggi in 2003. Hence, the CBI arrested him in 2005 but let him go soon after. Further, both of them were also accused of tampering with the Antagarh bypolls of 2014.

But these accusations have long been covered up by them. They have made a place for themselves in the current elections by forming a new political party and tying up with the BSP and CPI. The alliance has the ability to turn the results by not letting their rivals – the BJP and the Congress get a majority stake.