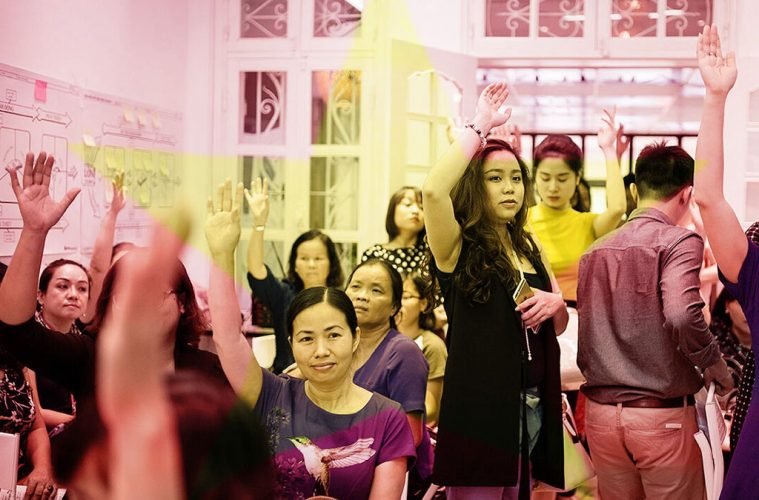 Women Of Vietnam And A Culture Of Discrimination Against Them

“I’d like to ride storms, kill sharks in the open sea, drive out the aggressors, re-conquer the country, undo the ties of serfdom, and never bend my back to be the concubine of whatever man.”

This is how Lady Trieu roared against the Chinese occupation of Vietnam in the 3rd Century AD. This was ofcourse the time when there was no discrimination between the men and women of the country.

Vietnamese history fondly remembers Trieu as one of the first resistors against Chinese rule over Vietnam. The country finds so much inspiration in her that it has named a host of streets after the lady warrior. She has also found a place among many temples in Vietnam. 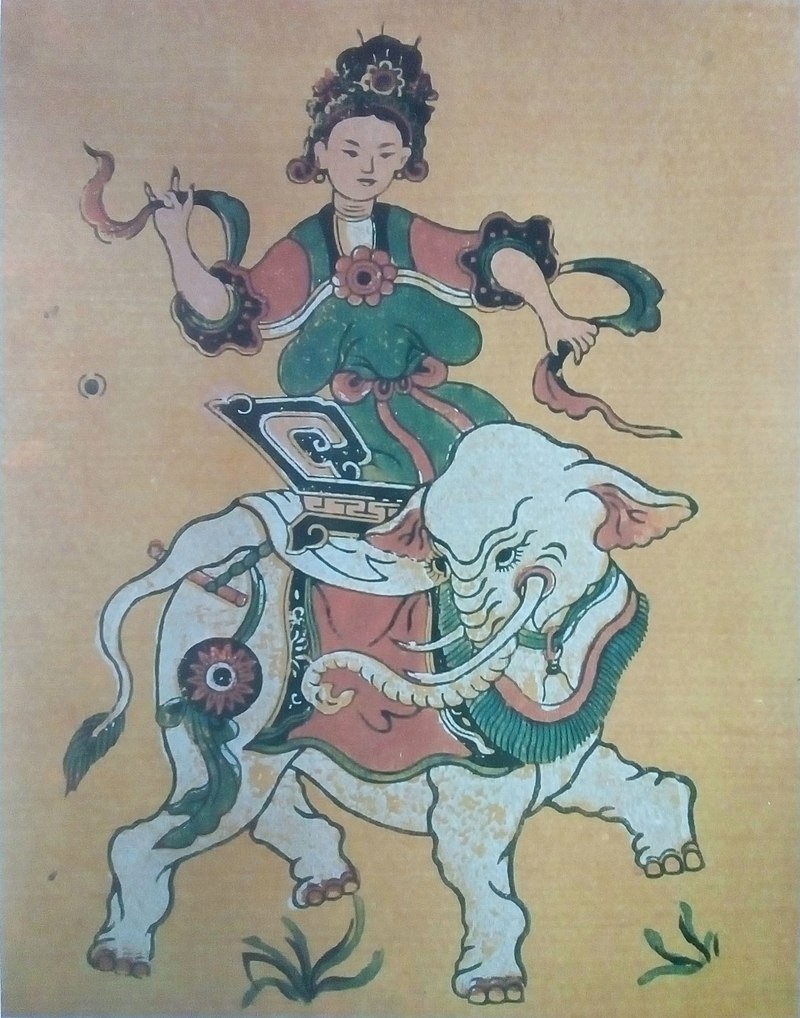 Lady Trieu, a third century warrior, is revered as a deity in Vietnam.

Another set of Vietnamese national heroines are the Trung Sisters: Trung Trac and Trung Nhi. In AD 40, Vietnam continued to rile under Chinese occupation. Much to the chagrin of their Chinese rulers, the Trung Sisters carved out their own kingdom in Me Linh. The elder sister, Trung Tac, presumed the title of the Queen of the kingdom. Such was the might of the will of the Vietnamese women, that the Trung Sisters raised an army of 80,000 soldiers which defeated the Chinese in their province. 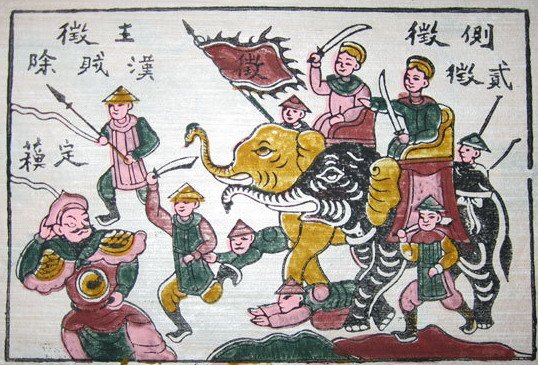 The Trung Sisters are national heroines in Vietnam for putting up a brave fight against Chinese occupiers.

Notwithstanding the temporary nature of resistance, historians often quote examples of Lady Trieu and Trung Sisters to highlight the prevalence of matriarchy in Vietnam during its early history. But fast forward to the twenty-first century and you will witness a host of issues proving to be nightmares for the women of Vietnam.

Since the Chinese armies claimed Vietnam in 111 BC, they worked hard to percolate its official ideology – Confucianism – into Vietnamese lifestyle. The Chinese occupants made it mandatory for officials to undertake rigorous study of Confucian texts.

Thanks to the widespread of Confucianism, Vietnam moulded itself into a patriarchal society. Men eased themselves into the role of being the heads of families. Meanwhile, women’s lives were adversely affected by patriarchy and the emphasis on family values. People began to consider premarital virginity an issue of immense importance. Society began to look down upon abortions and divorces initiated by women. The people of Vietnam raised several uprisings against Chinese domination. Though they finally succeeded to overthrow the thousand-year rule in 938 AD, Confucianism had left a permanent mark in the Vietnamese psyche. 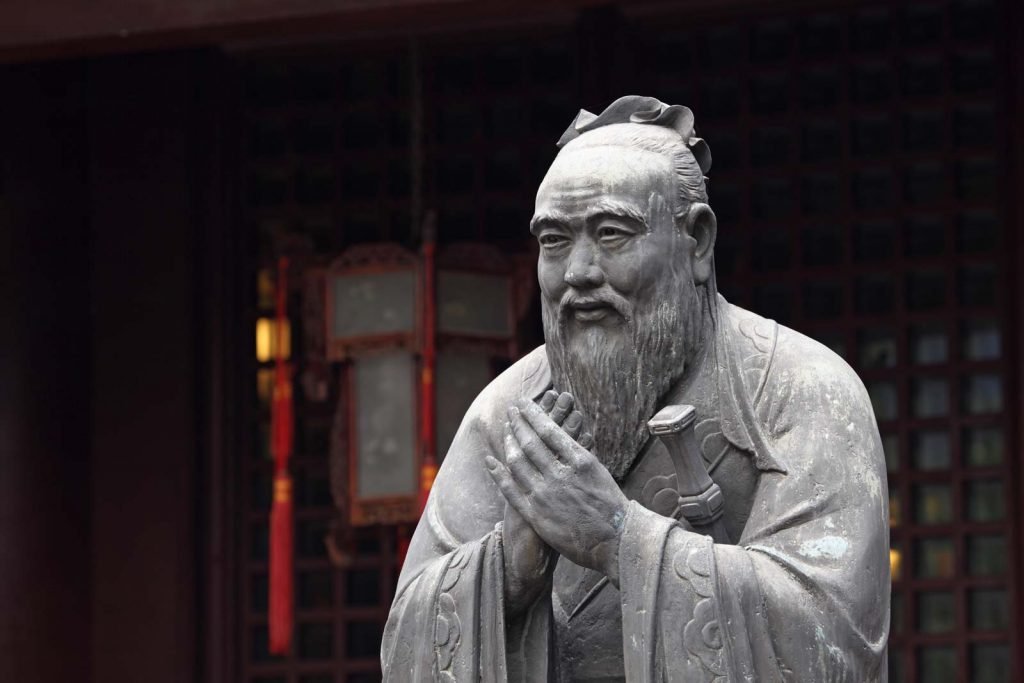 Confucian philosophy upheld patriarchy and downgraded the importance of women in the society.

Later the French entered Vietnam. The French first became involved with Vietnam in the 17th century as an area of interest for the spread of Catholicism. Soon, Vietnam and France indulged into trade with each other. The religious and economic relationship soon assumed a political fervour and French troops made advances towards Vietnam in the 18th century. France’s attempts to establish a colonial rule in Vietnam materialized when it emerged victorious in the Sino-French War of 1884-85. Finally, the supremacy of France in the region led to the formation of French Indochina (a territory made up principally from Cambodia, Laos and Vietnam) in 1887.

The French rule in the 19th century did not help matters at all for women of Vietnam. Vietnamese women considered a marriage to a Frenchman an opportunity to develop their standing in the society. Even when a Frenchman returned to France, the wife continued to enjoy a position of power. However, the French looked down upon Vietnamese women. They considered their wives to be nothing beyond concubines. Historian Barbara Andaya explored the relationship between colonial European tradesmen and local women in her article aptly titled, ‘From Temporary Wife to Prostitute‘. Through her research, Andaya revealed that women, who married Frenchmen, were considered cheap and similar to prostitutes. Foreigners preferred temporary marriages with Vietnamese women merely for sexual pleasures. However, such marriages demoted the status of Vietnamese women and permanently eroded their self-worth.

The Women’s Union formed in 1930 played an instrumental role in establishing the rights of Vietnamese women. It took a firm stand on important issues that made women go through horrid times. Important among these issues were the practice of concubines, child marriage, forced marriage and short paid maternity leaves.

In its bid to free itself from French rule, Ho Chi Minh created the Lao Dong (Vietnam Workers) Party in 1945. The Lao Dong Party also highlighted the sorry plight of women during the colonial rule. However, their non-seriousness about the issue became evident when it ranked women’s liberation as ninth in a list of ten most important issues.

The end of French rule in 1954 came after a hard fought war that lasted eight years. It resulted in the partition of the country into North and South Vietnam. 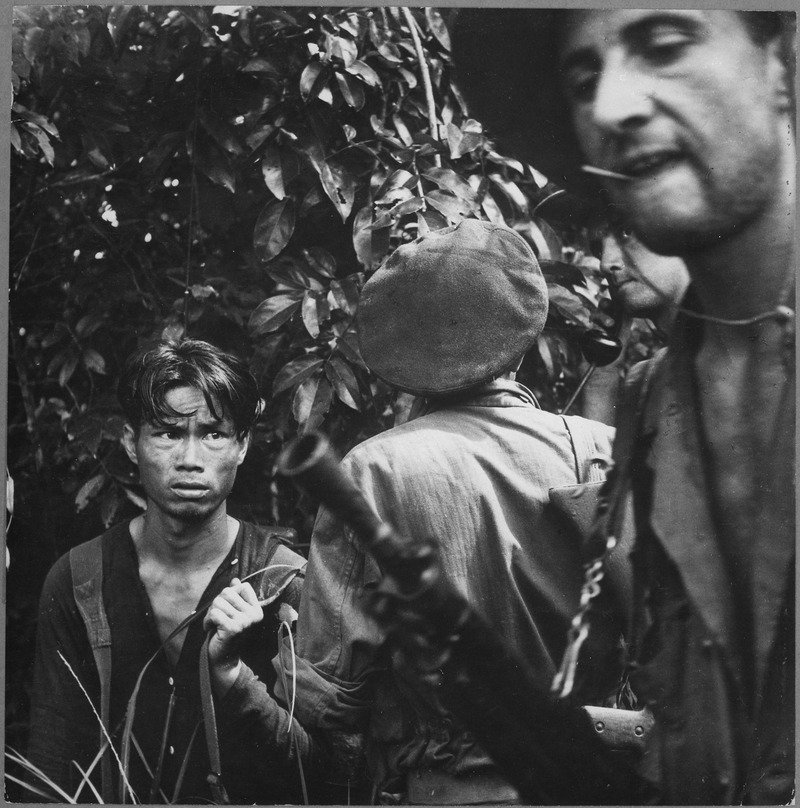 French soldiers question a Vietnamese during the Vietnam-French war.

The country had hardly recovered from this anti-French war when it inflicted another war upon itself. North Vietnam (supported by Communist countries like USSR and China) and South Vietnam (supported principally by USA and its allies) clashed in the Vietnam War that went on from 1955 to 1975.

During the Vietnam War, the women were involved in twin wars – one against enemies of their state and the other against gender discrimination. Once again, women collectively donned a brave hat and assumed multiple roles like intelligence agents and military recruits. 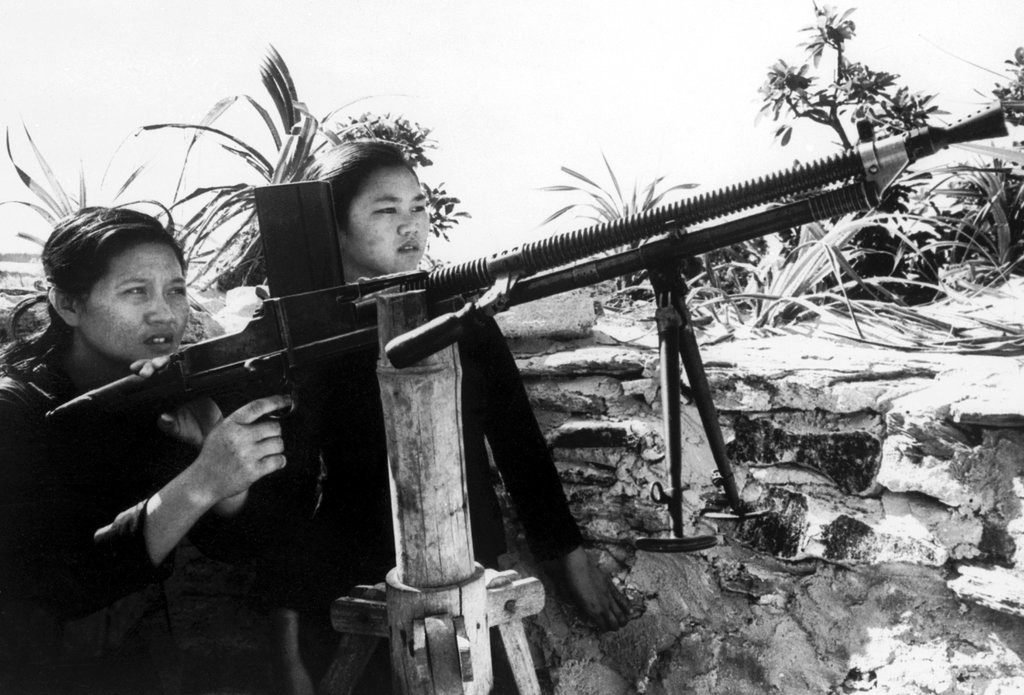 Women played an important role during the Vietnam War.

The war led to an incorrigible loss of more than 900,000 Vietnamese soldiers. But from the women’s rights point of view, men’s involvement in war meant a silver lining. The requirement of women in driving the economy forced the Government to raise the quota of women to 35% in all jobs. Women also got the opportunity to hold important administrative posts. But this shift in gender roles did not last for long as men re-assumed their posts after the war.

Even after the women proved their mettle time and again throughout the course of Vietnam’s history, they continue to face discrimination even in modern times. Vietnam’s rural areas are still attuned to Confucian ideology.

A major aspect of discrimination is during child birth. A boy’s birth is seen to be a reason for celebration as it ensures the continuation of the family. Clouds of patriarchy and Vietnam’s two-child policy (adopted in 1986) have warranted use of ultrasound machines to determine the unborn baby’s birth. Female babies are often subjected to abortion. This has skewed Vietnam’s sex ratio to an undesirable 110 men per 100 women. Besides the physical trauma, the pressure upon a woman to give birth to a male child is an additional emotional burden.

Domestic violence is so rampant in Vietnam that the Government’s own report admitted to one out of three married women having faced violence at the hands of her husband. Unfortunately, women cannot walk out of marriages owing to societal pressure and divorces being considered a taboo.

The Confucian mindset that, ‘Women are more suited for household chores,’ has infiltrated into workplace too. Employers perceive women to be willing to stay at home. This has resulted into workplace discrimination and fewer employment opportunities. Fewer female role models translate into fewer women seeking employment. The following graph shows that women find a preference only for stereotypical roles like accountants, secretaries, customer care executives and receptionists. 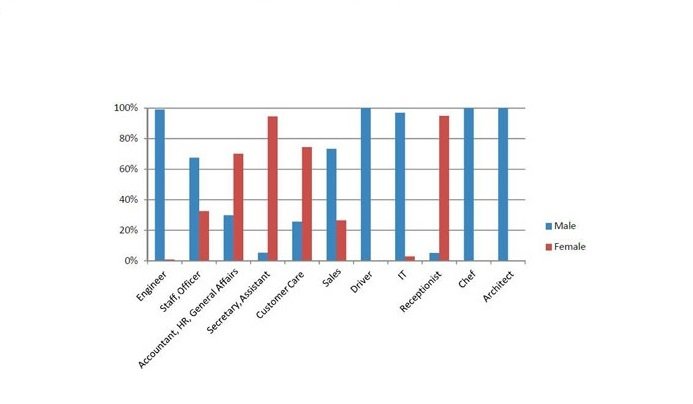 The legislation has mandated a lower retirement age of 55 years for women compared to 60 years for men. The difference in retirement age was present in the erstwhile Labor Code of 1994. The Labor Code dictates the regulatory provisions with respect to labor, insurance and productivity management. Vietnam amended its Labor Code in 2012 replacing the earlier provisions with new ones. However, women were once again left in the lurch as their retirement age was again kept lower than that of men by five years. The prejudice becomes all the more stark when one considers the fact that the average life expectancy of a Vietnamese woman is 82 years whereas it is 71 years for a man.

This bias in retirement age indicates that even the Government manifests a discriminatory attitude towards women. Combined together, such discrimination has caused the average Vietnamese woman worker to earn only 70-80% of her male colleague’s earnings. Another side-effect of a severely male-dominant society is the women’s degradation to being easy targets for sexual harassment at workplace. 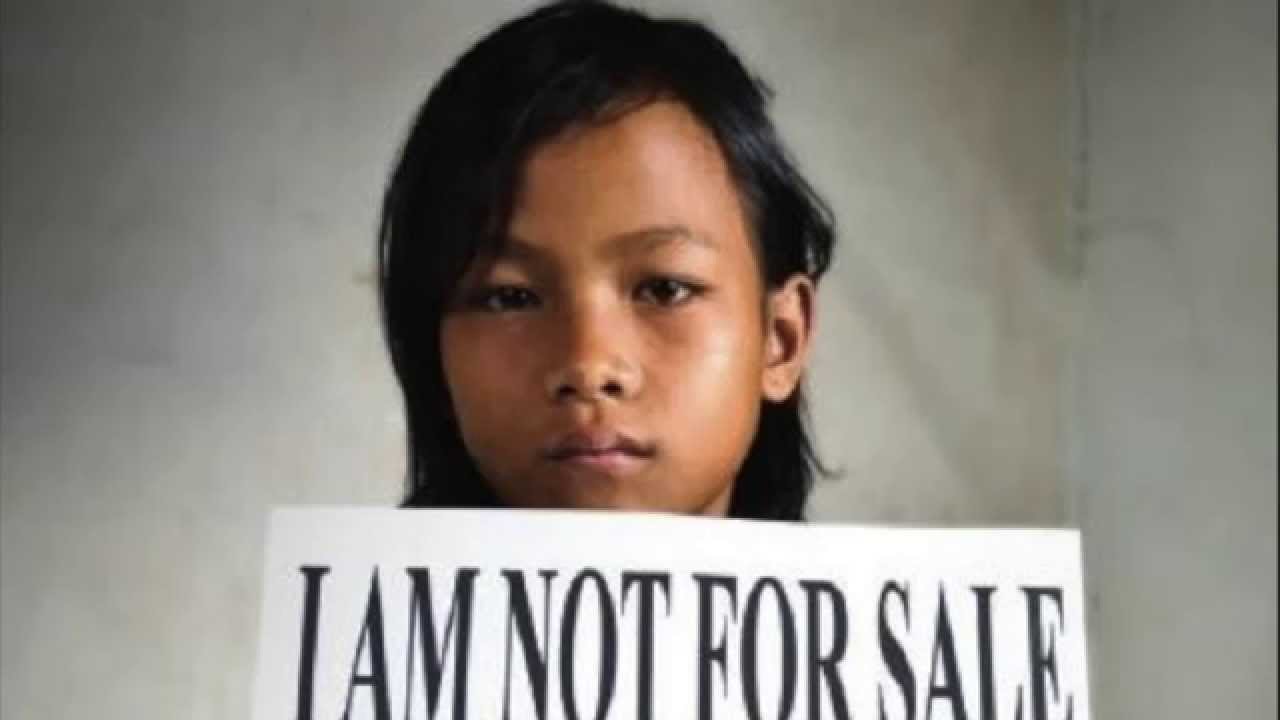 Human trafficking is a serious problem for women in Vietnam.

Society’s preference to a male child compared to a female child has given rise to a rather serious human trafficking condition in Vietnam. Shunned by their own, women and girls are often trafficked to People’s Republic of China, Cambodia, Thailand, Korea and Malaysia. Gender discrimination plays a huge role in human trafficking from Vietnam. In the face of job discrimination at home, women and girls see opportunities to move abroad and earn a living for their families.

Women agree to move out of Vietnam with little or no knowledge about their future life. The promised jobs are often under inhuman conditions. In the harshest of cases, trafficked women are employed as slaves or are subjected to commercial sexual exploitation.

For readers at home in India, the issues of Vietnamese women might seem to be a reflection of their Indian sisters. However, to draw a comparison, we must resort to a few data points.

The Road Ahead for Vietnamese Women

As Vietnam is administered by a Communist government, every initiative must flow from the top. The Government has done well to enact two significant laws – the ‘2006 Law on Gender Equality’ and the ‘2007 Law on the Prevention and Control of Domestic Violence’. However, the Government will do well to make sure that these laws are actually implemented beyond the realms of constitution’s written word. While sexual harassment provisions need urgent attention, it also needs to implement laws related to women’s representation. Immediate focus is also warranted by the need to equalise the retirement age for men and women.

A significant onus also lies with Vietnamese men. They must accept the drawbacks faced by their female counterparts. Generations of conditioning has created a mindset among men that women are inferior to them. However, one view at Vietnamese history will enable men to realize the power of the yet-unseen Lady Trieuses and Trung Sisters, one that will release Vietnam from the shackles of male domination.

As recently as 2015, the United Nations Convention on the Elimination of Discrimination against Women (CEDAW) unmasked grave violations of women’s rights in Vietnam. The CEDAW committee took a serious stance against the prevalent patriarchy and widespread violence against Vietnamese women and girls. In the view of such mass gender-discrimination, NGOs such as Oxfam International, The Asia Foundation and Plan International have come to the forefront for supporting women’s and girls’ cause in Vietnam. The United Nations has a dedicated program called UN Women Vietnam that aims to empower women and establish gender equality.

Find our other articles on discrimination against women here.