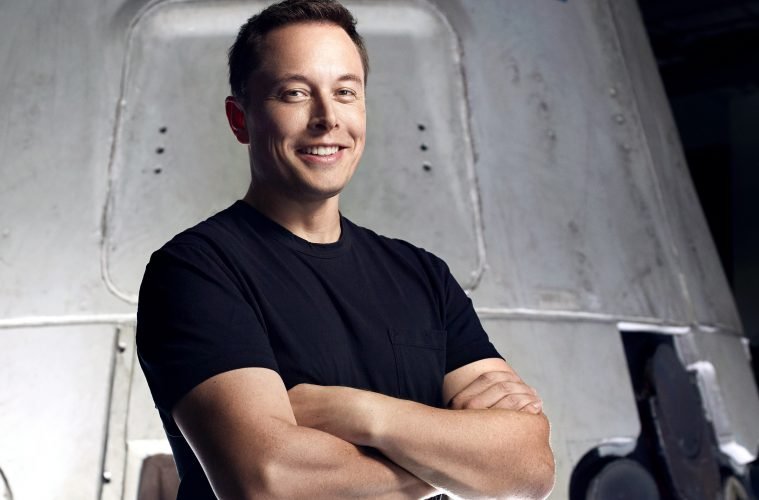 Elon Musk is Tony Stark in Real Life Or Just A Weirdo?

Elon Musk is quite a superstar these days in the world of technology as well as startups. The guy has the nerve of turning his most idle thoughts into reality. You may think that his tweet about ‘candies’ is just a musing but the next day, there is a firm called ‘Candy Company’ with Musk as the Founder, CEO, or Chairman. You know the drill. But those of you who do not know Elon Musk, let me draw you an analogy. Ever heard of the comic book genius named Tony Stark and his legendary Iron Man suit? Yes, people do draw comparison that Musk is the real life Tony Stark or at least, as close to Stark as reality and the current technology would allow it.

You might wonder why so much attention to this man. Lets start with what he has achieved so far and consequently jump on the fact how dangerous it is to give power to a man who does not know how to use it.

Elon Musk started his ‘innovation’ streak in 1995 when he started his first company called Zip2 with his brother Kimbal Musk. It was a company that provided and licensed online city guide software to newspapers. Musk dropped out of Stanford University in two days to start Zip2. He later bought a silver McLaren F1 car for $1 million in 1999 after selling Zip2. “There are 62 McLaren F1s in the world, and I will own one of them,” Musk had commented then. In 2000, Musk was driving his McLaren F1 with Peter Thiel, his fellow Co-founder at PayPal, when he crashed it.

What is PayPal, you ask?

In 1998, Musk Co-founded PayPal in California, United States. PayPal is a company operating a worldwide online payments system that supports online money transfers. But then he sold his part of the company and moved on to founding space exploration startup SpaceX in 2002. Now SpaceX is an interesting concept. The company’s goal is to reduce the cost of rocket launches and other missions by reusing the same rockets for different launches.

Last year, the company made headlines after it launched its payload to space and managed to save two out of three boosters on Falcon 9 rocket. The first hint of Musk’s eccentricity is when he loaded his Tesla Roadster on this rocket and sent it to space with the label, “Made by humans”. He live-streamed the launch and also had a mannequin sit in the driver’s seat to make it look pretty. He also made a website where people could track its location in real time. What were you thinking? 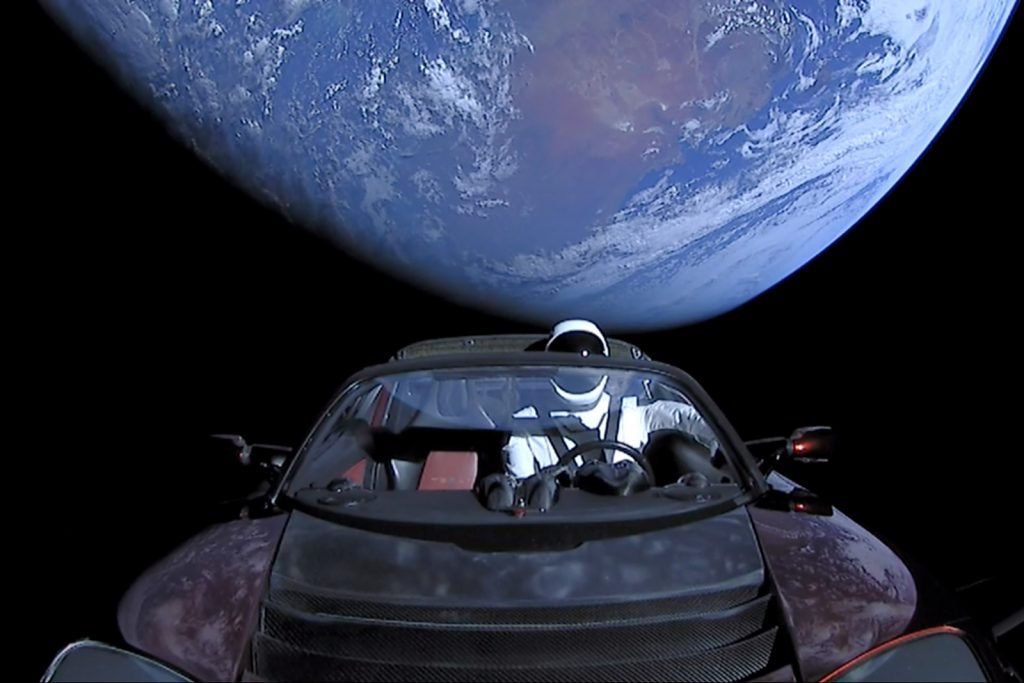 Another day, another start-up. Musk launched the electric car and solar panel manufacturing company in 2003 called Tesla. Claiming to make the best electric cars to “help the environment“, the company’s Tesla Roadster (2008) was the first production automobile to use lithium-ion battery cells and the first production EV with a range greater than 200 miles (320 km) per charge. Sure. Elon Musk once revealed why Tesla was formed. Musk said Tesla was started after General Motors recalled all electric cars from customers in 2003 against their will. Tesla was not formed to make money, as its founders thought there was a “90% probability of losing it all,” he added.

In 2015, Musk co-founded OpenAI, a nonprofit research company that aims to promote “friendly” artificial intelligence. Here I would like to take a detour. Believe me, its worth the distraction from the various companies he has founded.

Talking at an event earlier in March, Elon Musk said, “Mark my words… AI (artificial intelligence) is far more dangerous than nukes.” He said, “There needs to be a public body… to confirm that everyone is developing AI safely, this is extremely important.” “I’m very close to the cutting edge in AI and it scares the hell out of me,” he added.

But another time, Musk, totally unaware of what he is doing, also said, “If AI (artificial intelligence) has a goal and humanity just happens to be in the way, it will destroy humanity as a matter of course without even thinking about it.” Musk added AI will never die and “you’d have an immortal dictator“. If one company develops “godlike” AI, it’ll take over the world, he said.

Are you with me? The man makes a startup to make AI, then criticises the very idea of the technology when others try to do the same.

This one is my favourite. When Elon Musk tweeted “Competition for AI superiority at national level most likely cause of WW3.” WHAT?? Okay, Musk, I am with you on this. His tweet came in response to Russian President Putin’s stance on artificial intelligence. Putin had said, “Whoever becomes the leader in this sphere will become the ruler of the world.“

What is more interesting is when Facebook CEO Mark Zuckerberg took a dig at him going against AI, saying, “naysayers…try to drum up these doomsday scenarios…I actually think it is pretty irresponsible,” Musk took to Twitter to say Zuckerberg had a “limited” understanding of artificial intelligence (AI). #SlowClap

At one point, Musk also advised the world to understand AI. “The public deserves at least insight from the government… I do think there are great benefits to AI. We just need to make sure that they’re indeed benefits, and we don’t do something really dumb.” True, Musk, I hear you.

The man goes on and on and on about the risks of AI, and makes machine learning in his backyard. Totally concerned about the world war three. So much for the world peace!

If this wasn’t enough, Musk started another startup in 2016 called Neuralink which will create devices that can be implanted in the human brains to help them keep up with machines. (No hints on black mirror series, I am sure you are thinking about it too!) The same year, Musk tweeted that he was tired and ‘bored’ of the traffic on the roads and would do something about it. And guess what he did? He founded The Boring Company, a startup that digs tunnels to avoid traffic. Currently, it is working underground, currently working on building ‘Loop‘, a high-speed underground public transportation system. The twin tunnels would run in parallel for approximately 35 miles from downtown DC to downtown Baltimore, beneath New York Avenue and then the Baltimore-Washington Parkway. Its not for us though. Sad. 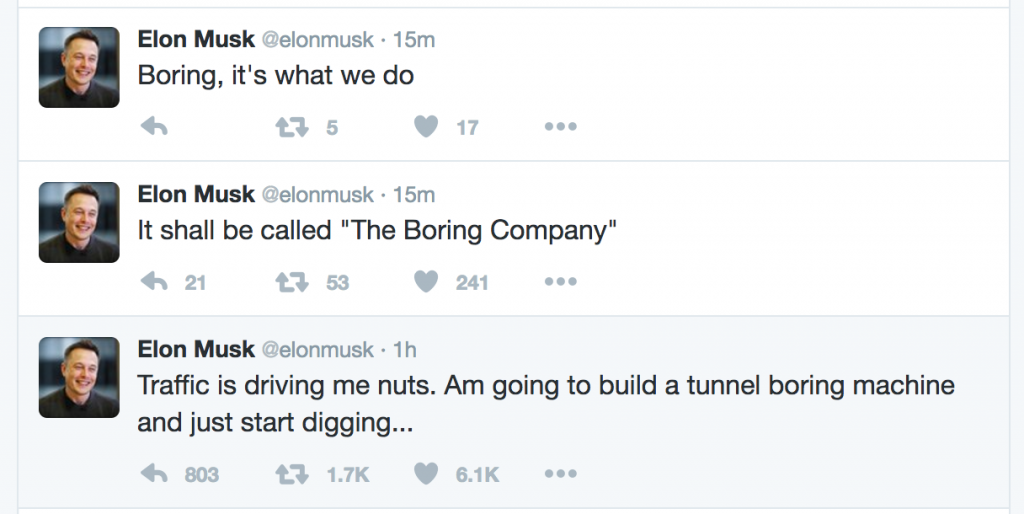 Since, he uses ample amount of time investing, he also introduced a concept for a “fifth mode of transport” in 2013, calling it the Hyperloop. I am sure you must have heard about Richard Branson’s Virgin Hyperloop One working on building a Hyderloop from Mumbai to Pune? Its something like that. The idea is to propel people – or cargo – filled pods over long distances through steel tubes using magnetic levitation and big vacuum pumps.

But just when you would think, Musk is a genius, he goes and does something like, “Oh btw I’m building a cyborg dragon“. The tweet came out of no where and has no context. Who would even want to build such a thing if you want “world peace”?

On April fools’ Day, the genius in a tweet announced that Tesla had gone bankrupt. “Despite intense efforts to raise money, including a last-ditch mass sale of Easter Eggs… Tesla has gone completely and totally bankrupt,” he wrote. Musk also shared his photo with the caption, “passed out against a Tesla Model 3, surrounded by ‘Teslaquilla’ bottles“. Without a doubt, people kept asking about the “Teslaquilla” and later he posted a picture of the “Teslaquilla” as well. Trying to keep the fans happy, I suppose. 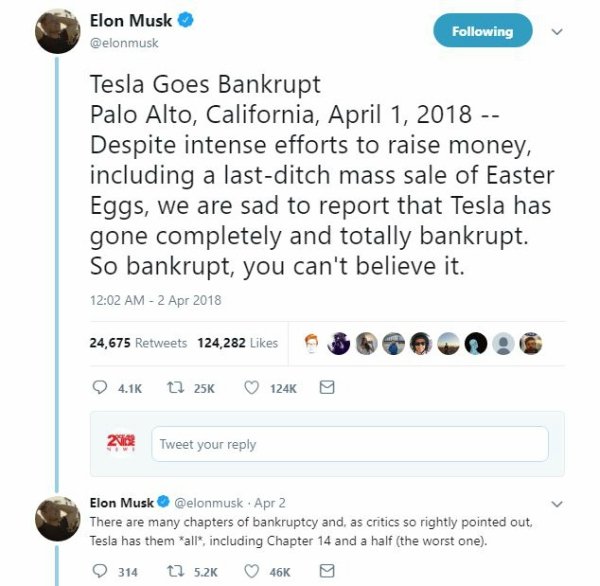 Last year in December, Musk “accidentally” shared his personal phone number on Twitter. Musk tweeted at Oculus Chief Technology Officer John Carmack, asking him if he had time to talk and posted his phone number in the tweet publicly. However, Musk deleted the tweet soon after, reports said.

Talking about Musk’s obsession over Mars, while outlining his vision for a self-sustaining city on the red planet, SpaceX CEO Elon Musk in 2017 stated that human colonies on Mars could be built within our lifetime. Musk noted that with current technologies, a ticket to Mars would cost around $10 billion.

Bringing the intensity down a notch, talking about SpaceX’s experimental satellites ‘Tintin A & B’ (notice the names) for broadband internet network, CEO Elon Musk said they are “good enough to play fast response video games”. These satellites are equipped with flat phased-array antennas which are actually designed to stay in contact with ground stations. But he thinks its for playing games too. How cute?

Coming to recent times, one of the most hilarious “Boo-yaa!” that Musk pulled on himself was when Tesla lost around $2 billion in market capitalisation after he cut off analysts’ questions during a conference call in May this year. “Boring, bonehead questions are not cool“, Musk said after an anlyst asked about Tesla’s capital requirements. When asked about Tesla 3 reservations, he added, “These questions are so dry. They’re killing me“.

You heard me, ‘Boring’ BAM $2 billion off the charts.

Also, Musk cannot take it if someone takes a dig at him. Earlier in May, Berkshire Hathaway CEO Warren Buffett said, “Elon [Musk] may turn things upside down in some areas, I don’t think he’d want to take us on in candy.” Taking it to heart, Musk tweeted, “I’m starting a candy company & it’s going to be amazing” and later added, “I am super super serious“. Adding that he is going to “build a moat & fill it w candy“, he said, American investor Warren Buffett “will not be able to resist investing! Berkshire Hathaway kryptonite“. Its pretty hilarious. Driving to extremes to prove a point. He actually did share a picture of a real ‘Boring Candy’, days after his Twitter announcement.

In the beginning of the year, Musk raised $1 million for the tunnelling startup ‘The Boring Company’, by selling hats worth $20 each. Musk sold out the entire line of 50,000 plain black baseball caps showing the firm’s logo in over a month. The Muskatang has got some fans.

In a recent interview, Elon Musk’s father Errol called Elon a “spoilt child” and said he “needs to grow up”. “He can’t have what he wants and now I am apparently an evil monster,” Errol added. Earlier, Musk called his father a “terrible human being”, and said, “Almost every crime…every evil thing you could possibly think of, he has done“. However, Musk and daddy issues is a story for another day.

Earlier this week, a fake news article was circulated which claimed the Roadster Musk sent up to space had crashed back to Earth, and landed on Nobel Prize laureate Malala Yousafzai’s head, killing her. Taking it in stride, Malala responded by tagging Musk on Twitter and said, “Hello from the other side.” When Musk replied to her “Hi Malala”, Yousafzai joked she is keeping the car.

Phew! I am hoping you would also agree with me here when I say, the man knows his Twitter game but doesn’t know it enough. Musk’s tweets are taken as memorandums and he has fans who actually idolise him. I just hope he doesn’t turn evil on us and try to take over Earth while sending people to Mars. (Just my theory, though you can let us know your own!)