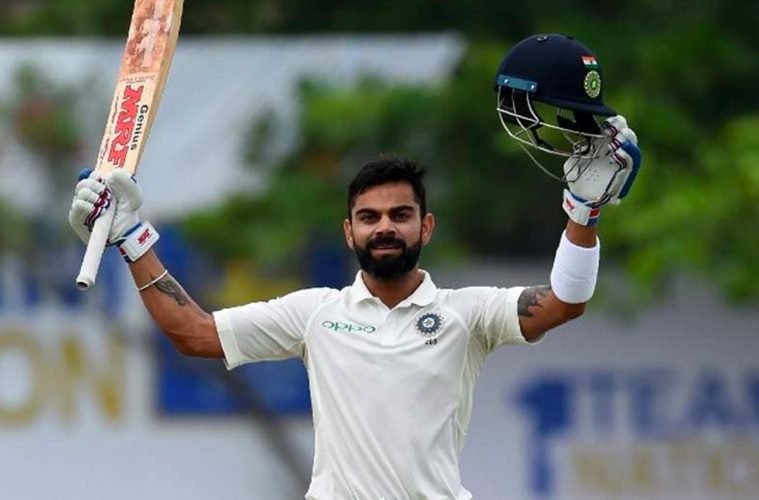 Everything or Nothing – Virat Kohli’s Slogan For The England Tour

“Failure is temporary, it doesn’t last forever”. The quote holds true in the case of the Indian skipper. Ever since the 2014 tour against England, Virat Kohli has never looked back and continued to match greatness with consistency. Four years later, he is back here and with a determination to erase the only blemish in his career. A chance to end the “Kohli needs to score in England” debate once and for all.

A batsman with an overall average of 53.40 having smashed 5554 runs, surely a tough guy, a future legend. However, the picture is quite different in English conditions. He scored runs at 13.40 in his previous tour here in 2014. This might have happened four years ago, but it is still fresh in Virat Kohli’s mind. Jimmy Anderson who got his wicket four times back then is probably aware of it.

Virat Kohli as a Batsman and a Skipper

Throughout his career, Kohli has relished playing under pressure situations. He has looked forward to every challenge and knocked them out. Call him arrogant, call him brash, he is still going to make you bow down in adulation. That’s the kind of superstar he is, in the Indian cricketing circles. The Australian tour which shortly followed after the horrible England stint is a sublime proof of the same. 692 runs at an average of 86.50, four centuries, his elevation to captaincy.

Bad times always subside. The good times always take its place. And that’s what followed for Kohli. He just kept rising the ranks not only as a batsman, but also a captain. 10 consecutive series victories. All of them came at the subcontinent and West Indies, but India had never dominated over the opposition at such an astounding level.

“The bat is not a toy, it’s my weapon”. This just defines the character portrayal of the Indian skipper. Thanos with his infinity stones is what makes him superior. Daneryes with the dragons is what gives her strength. For Kohli, it’s the bat which does all of it. The South African series was a closely fought one on conditions absolutely tough for the batting side. While there were some reservations about Kohli the captain, the batsman in him stood apart everyone else. Not only did he lead the run scoring table but he was also the lone to register a century.

It’s not about him being talented. It’s about him working hard and defying all odds. This is what has kept Virat Kohli right at the top for so many years. It is not a coincidence. It’s the extra inch he has done in his training sessions, an extra hour at the gym and an extra dedication to maintain his fitness.

An Opportunity For Kohli

Steve Smith may be on a sabbatical but the comparisons between him and Kohli never ceases to subside. It’s considered to be the modern era debate between Ricky Ponting and Sachin Tendulkar. Of course here, the Aussie is deemed to be the better out of two when it comes to the Test format. However, Kohli isn’t far behind.  The upcoming England tour is Kohli’s time to prove the world that he’s the greatest.

An English bowling lineup with a barricade of experience and class in Jimmy Anderson and Stuart Broad. A young Jamie Porter who has been sensational for Essex in their victorious County Championship campaign. A hell bent Ben Stokes who has been quite energetic on the field. Moreover, Moeen Ali who established himself as an instrumental part of the England setup in 2014. Also, the controversial selection of Adil Rashid who managed to outfox Kohli in the limited overs series.

The next couple of months are surely not going to be a cakewalk for the Indian captain. Also with integrated roles as the leader and as a batsman, Virat Kohli will be raring to prove his mettle in the English conditions. Things are going to be a full circle for him though he has improved immensely in this period. 11 years since the last test series India won in England. What followed later was an embarrassing 4-0 whitewash followed by a 3-1 humiliating defeat after being one up.

Thus, Virat Kohli has not one but two challenges as he walks out for the toss at Edgabston. Does he leave the ghosts of 2014 back forever? Does he erase the mantle of two heavy defeats in the previous tours? Or does it come back to haunt them? Only time will say. But with a warrior like Virat leading his army to the battlefield, this will be India’s best bet to win a series in England.