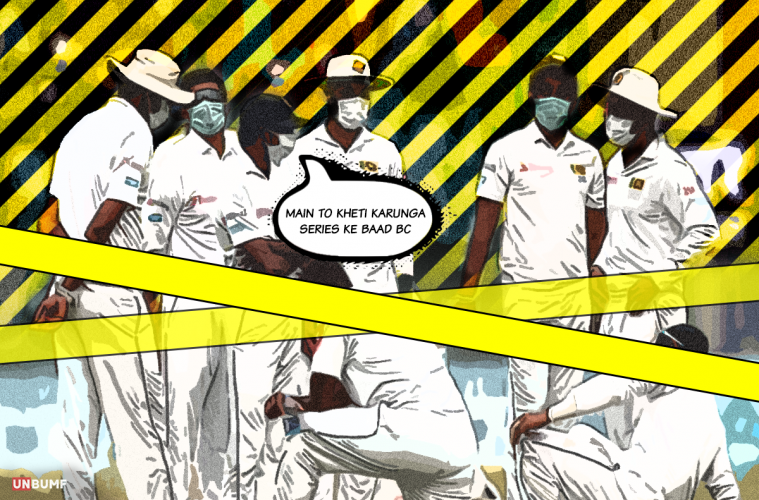 Cricket is full of drama. We do not have players falling to the ground for no reason. Instead, it takes up a lot of effort, team spirit, a well-written script and timing to make it happen. Sri Lanka is the frontrunner when it comes to this aspect of cricket. On the second day’s play in the third test of the ongoing test series in Delhi, they sent their 12th man to go buy some pollution masks from the nearby Medical Store. Once the props were in store, their Oscar-worthy Broadway play unfolded.

As the members of Sri Lankan Dramatics Society (a.k.a. the national cricket team) appeared on the ground wearing their newly acquired props, they reasoned that Delhi’s drastic pollution levels make it impossible to continue play in which Virat Kohli handed their asses back to them and was well on his way to a triple ton. Agreed that pollution levels are lingering on the verge of an impending apocalypse, but it wouldn’t kill any player in one day. Nor would it spectacularly shorten their careers which may have only a couple years left. The entire playing XI may well be replaced entirely in the next 3-4 years. And this is an extremely optimistic estimate. 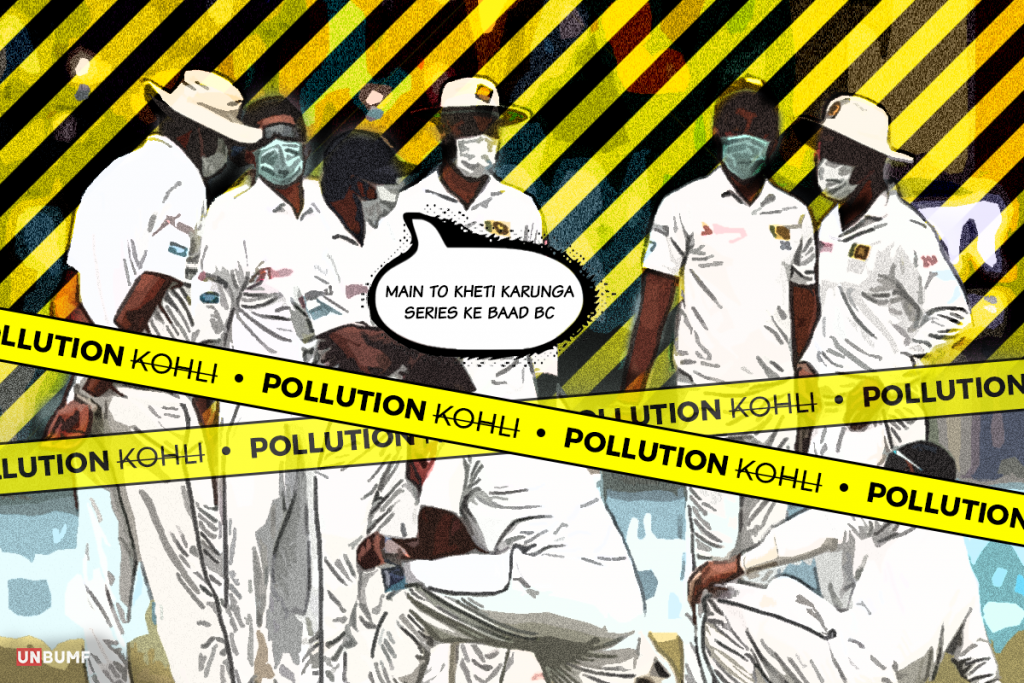 In fact, it was ironical such a drama coming from the Sri Lankans who still haven’t managed to get rid of the remnant smoke from the fire Hanuman waged on Raavan’s colony back in the day.

If you haven’t been keeping up with the ongoing India-Sri Lanka test series, you saved yourself a galactic waste of time. Sri Lanka is like the 12th man for BCCI. Always on standby for when the big boys of Indian cricket need a punching bag. Anyway, here’s the long and short of it – barring the first test where the Sri Lankans barely managed a draw, they were kicked, battered, bruised, torn apart and fucked anally in the second test. The story continues in the third test as well. Virat Kohli scored a double century in the last test. He did it again in this match as well.

In any case, we’ve decided to help the research division of the Sri Lankan team with a few valid reasons due to which future games in other Indian cities could be affected. They should be on the lookout for such an excuses valid reason cropping up anytime in the future. They are free to save this article for any future reference. And in case other teams might want to take a look, you’re welcome as well. 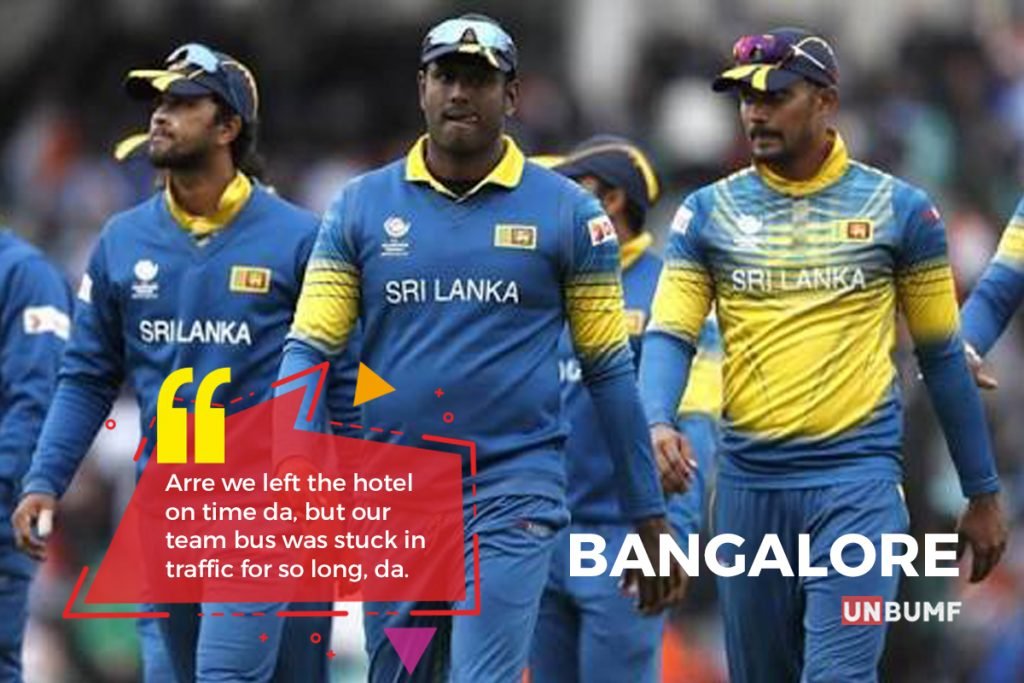 Bangalore, the Indian burial ground of hopes and ambitions for the over-populous engineering brethren, is renowned for its traffic woes. It’s often said that a journey across Bangalore burns the same amount of fuel as a to-and-fro expedition to the erstwhile planet Pluto.

“Arre we left the hotel on time da, but our team bus was stuck in traffic for so long, da.”

Following this, ICC will dictate that Virat Kohli will not get to bat in that innings. Phew! Will proclaim the Sri Lankans. 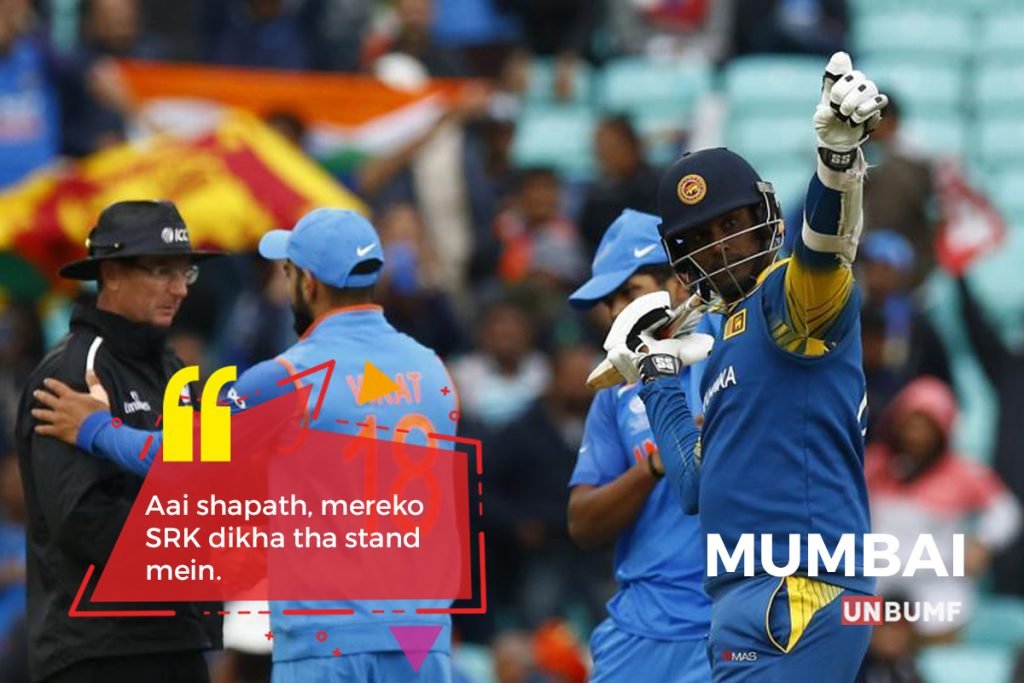 Mumbai, the financial capital of the country and only city on the face of the planet with the audacity to employ the opposites Varun Dhawan and Rajkumar Rao for the same designation.

Here are some valid reason why playing in Mumbai can be a challenge, from Sri Lankan point of view –

Also since DY Patil Stadium is in Navi Mumbai, which is like Mumbai’s Sri Lanka, they can question the validity of the venue – 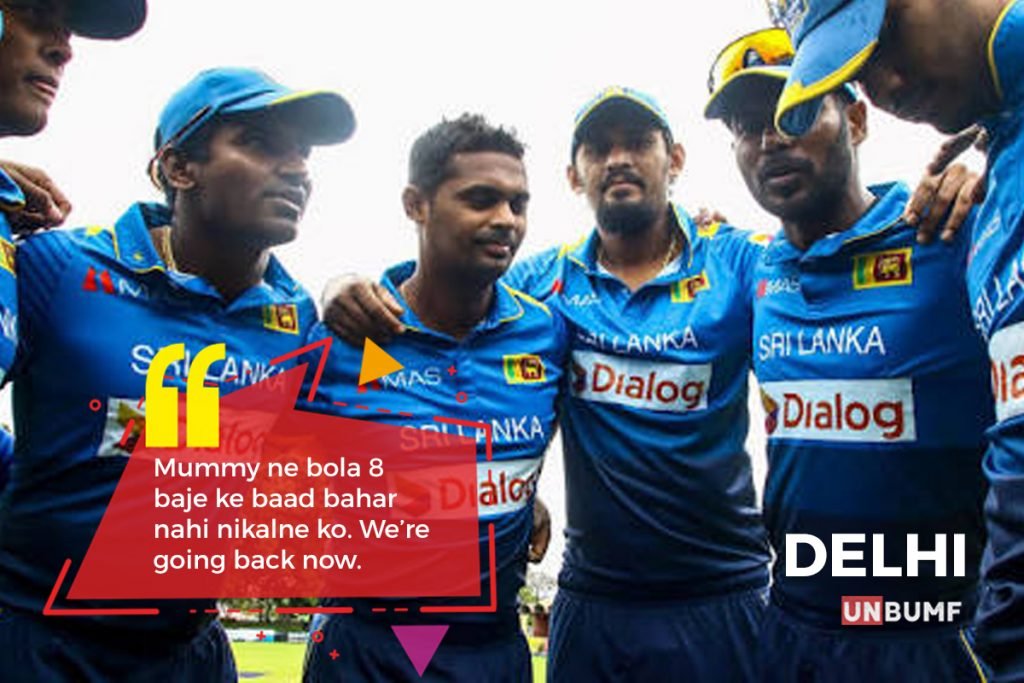 Apparently, according to media agencies and the general perception of humanity, people from far off corners of the world come to Delhi to rape women. Apart from this and the one excuse they’re done with, here’s something they can put to good use for day-night matches – 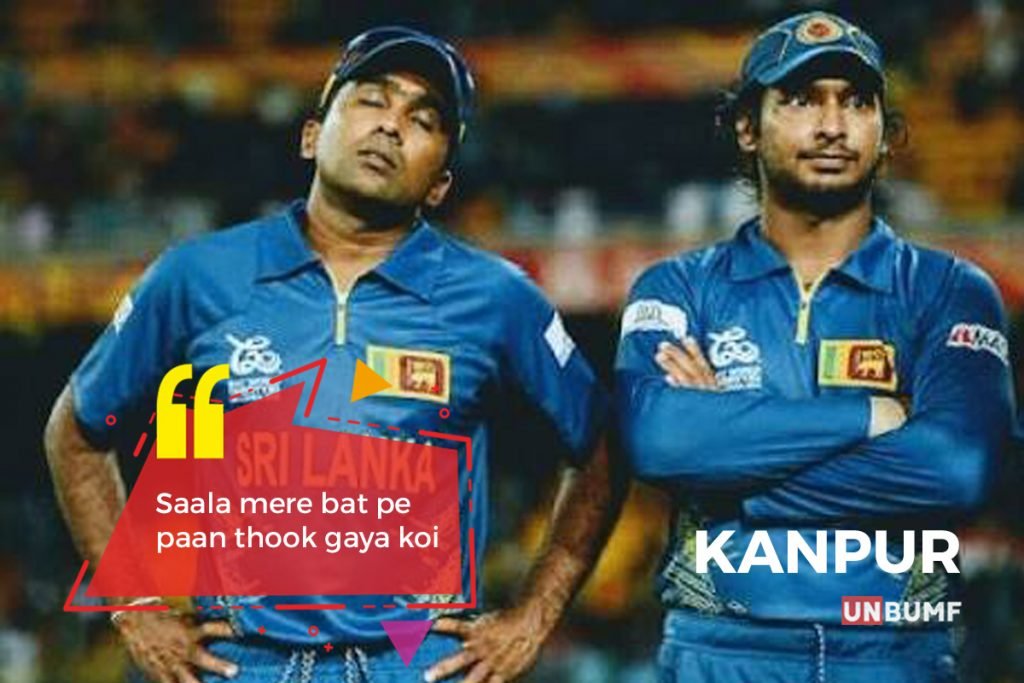 The quintessential opposite of the Lucknow’s ‘tehzeeb’, here is something with a high probability of actually happening – 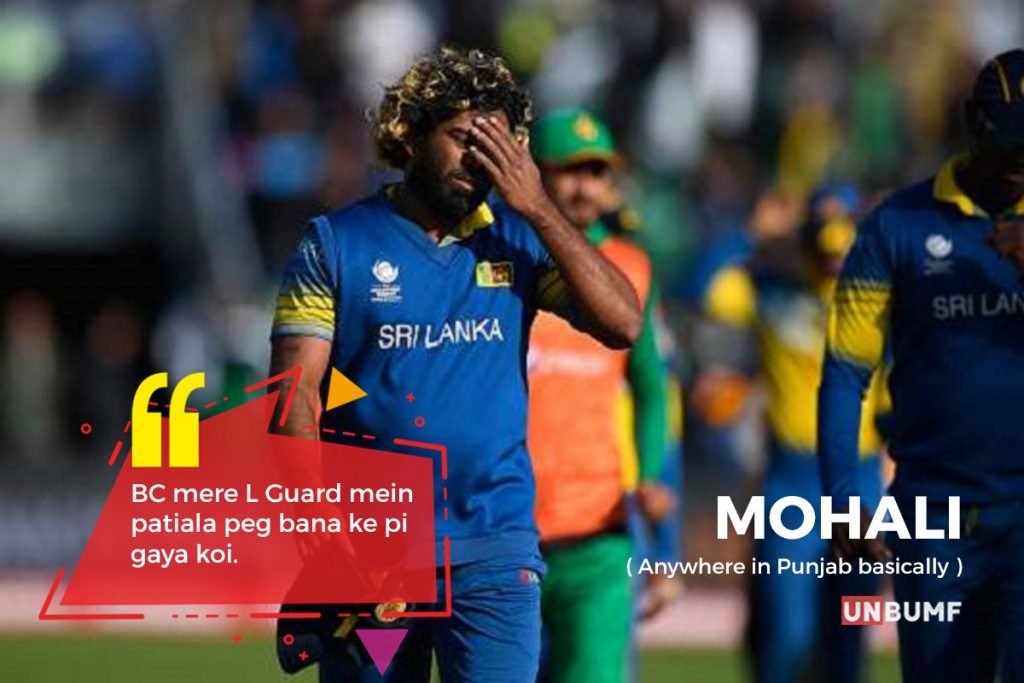 The Germany of India in terms of alcohol consumption, this could even be a valid explanation for delays in various games. Some of the excuses still unused can be –

“Can’t play because of derogatory comments from audience, calling us ‘Saale Madrasi.’” This is outrageous. 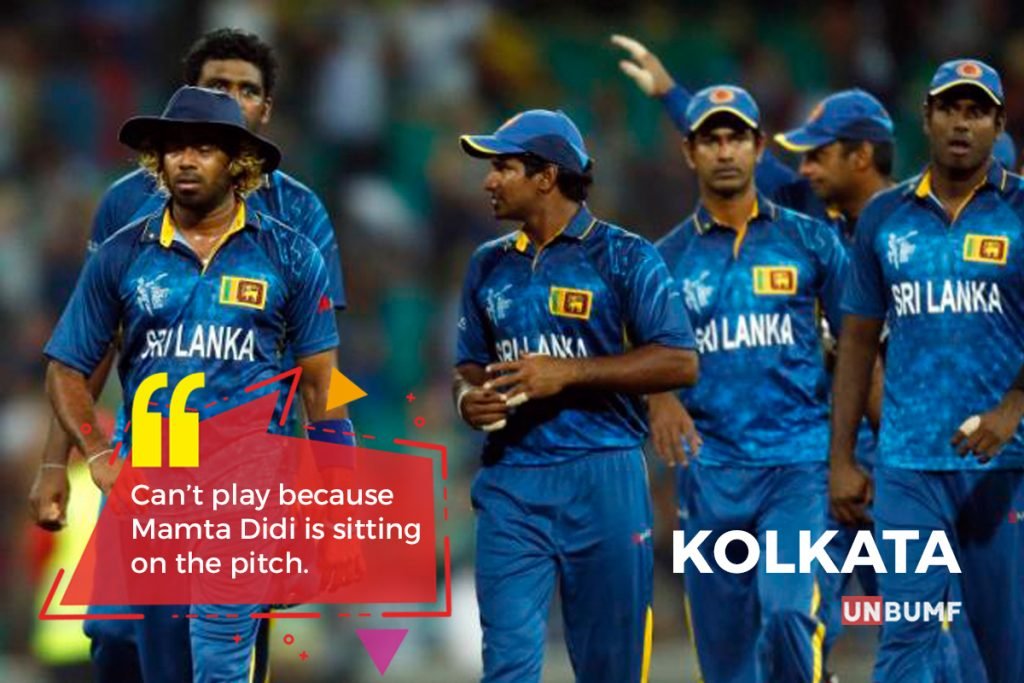 Suffice to say “Ye shahar Dada ka hai, aur Dada yahan ke Singham”. This city has utmost love for both cricket and football. Eden Gardens is a dream stadium for any cricketer to play in. With one of the highest seating capacity, this becomes an electrifying place to be in at its peak. But here too, some reasons will go well with Sri Lankan tactics of delaying the games and save themselves from an ass-whooping.

“Everyone only chanted Dada”

“Can’t play because Mamta Didi is sitting on the pitch.” 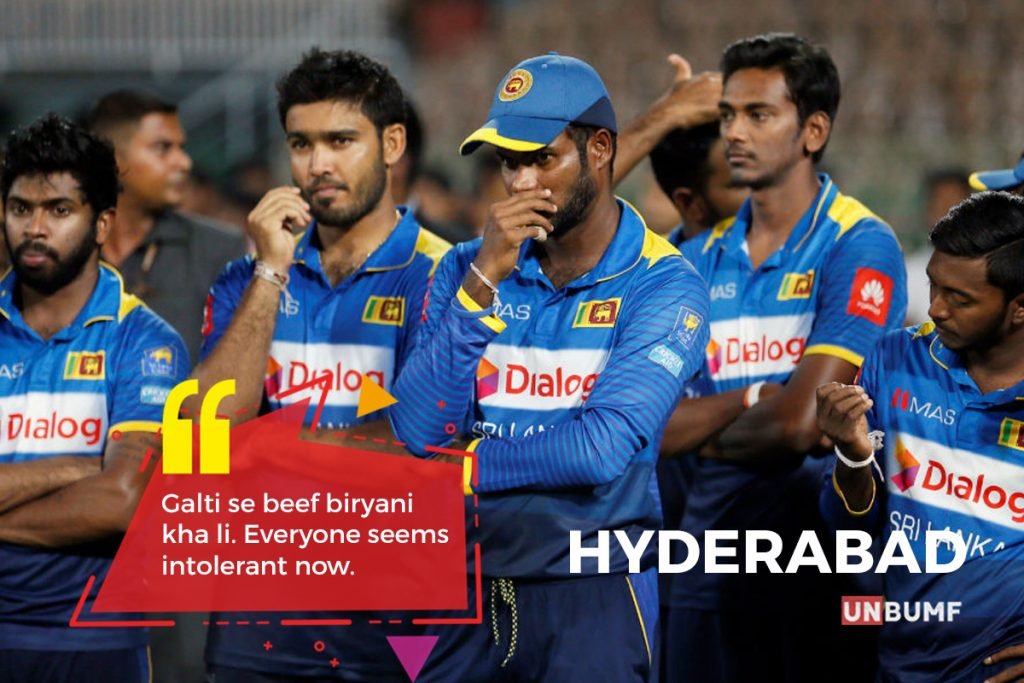 The city of Nizams and the second Bangalore in the making in terms of loss of hopes and dreams, a cricket game can be difficult to complete here for the Sri Lankan team, present, and future. Here are some reasons as to why –

“Can’t play because Umpire biryani khaane bhag gaya” because the addiction is real and we can vouch for that.

So here we are. We might have contributed to some annoying games in the future. But everything’s fair in love and cricket I guess. Having denied Sehwag a century by a well-timed intentional no-ball by Suraj Randiv on the last ball will make another minor drama(s) well in line with their tactics.

Maybe we are being too harsh on the Sri Lankans. Or maybe we are ‘right on the money’.