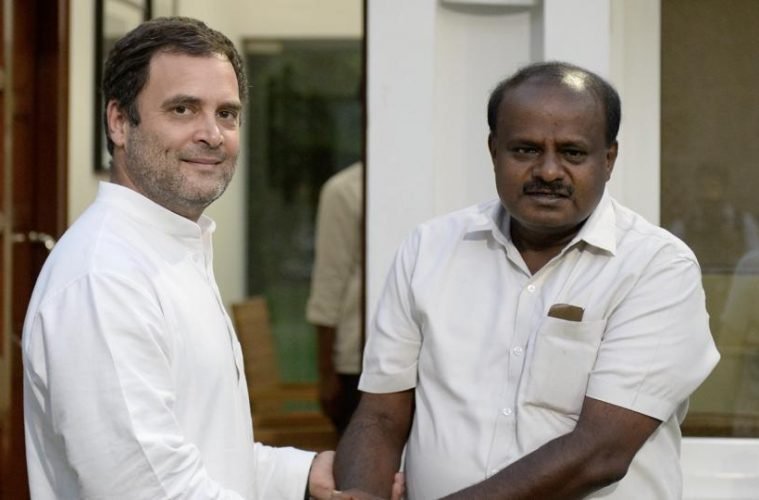 Fall Of Congress In Karnataka: Shudder To Democracy

Congress is being hit with setbacks one after the another ever since the election results came up. While Rahul Gandhi stepped down as the President inspite of the provocation to stay, from all corners. Even Jyotiraditya Scindia resigned from his position as the political party’s general secretary. Both of them cited the reason as taking responsibility for the party’s poor showing in the General Assembly elections.

It has been almost 50 days and Congress has failed to find a successor for Rahul. The leadership crisis has been clearly showing up in states like Madhya Pradesh and Rajasthan. But these are among the handful of states governed by the Congress at the moment. The issues foiling out on a regular basis in these states has surely hurt the ambitions and prospects of the political party.

At the same time, the situation is even worse in Karnataka where the coalition government with Janata Dal is losing hold owing to several resignations. The party faces stern test in the form of a floor test which will determine if they still have the majority.

At a time when Congress has been jolted with clueless-ness amongst the party members regarding the dos and donts in the future, the BJP has left no stone unturned in creating discontent in the opposition quarters. Allegedly, BJP has fuelled a rebellion in the Congress camp. Has the oldest party in the country turned incapable of keeping their house in order?

So far 16 legislators of the coalition party in Karnataka as well as two independent lawmakers have quit the party. With the resignation yet to be accepted, it may lead their number to drop below the majority mark. Meanwhile the BJP can get the backing of the two independent MLA’s and rise to power, seeking majority.

Will INC Bounce Back?

While the Congress has always emerged stronger inspite of all the breakdowns it has had in the past, this one seems to shaping up for a longer duration. This situation is a clear indication of negative impact on democracy in the country. BJP won the elections by a strong judgement in their favour. But the nation also needs a strong opposition that can question the ruling party’s performance. These are the areas where the Congress has fallen reasonably short.

Having said that, the issue of 16 members resigning possibly due to coercion is probably unjust. It needs intervention by the Supreme Court. There is a need for proper rules and regulations, to avoid any kind of government collapses, during tenure. It is a clear disrespect of the mandate of the people of the state.

How the Anti Defection Law Has Serious Flaws

A legislator is deemed to have defected if he either voluntarily gives up the membership of his party or disobeys the directives of the party leadership on a vote. This implies that a legislator refraining or voting against the party whip on any issue can lose the membership in the House. The law applies to both the assemblies whether it’s the Parliament or State.

The law does not allow the legislators to switch sides, working towards a sturdy government. However what the Karnataka MLAs have done is that they have left the party. But at the same time, cleverly held on to their Assembly seats which puts the Anti Defection law away. It is a clear ploy to disobeying the party leadership. Hence, there needs to be a proper implication and a stricter law to avoid such malpractice.

Read about the Domino Effect of Congress’s current situation, here.