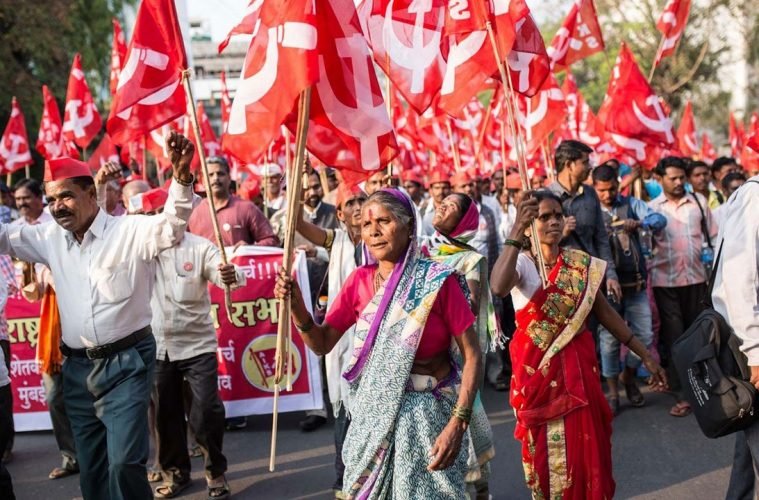 Agriculture Industry in India has undergone massive change in the past few decades. The contribution of agriculture to the GDP is not what it used to be at one point in time. With rapid industrialization and development of services sector, agriculture contributes to only about 15% of the GDP. However, a majority of the rural population still depends on agriculture for their livelihood. The farmers of our country have protested several times in the past few years. While the problems may not be new, the protests have intensified forcing people across the country to take notice of the situation. Our farmer needs attention.

At present thousands of farmers are protesting across Madhya Pradesh, Maharashtra, Punjab, Haryana, and Rajasthan. The farmers are participating in ‘gao bandh’ protests and crippling the supply of vegetables, milk, fruits, etc. to the cities. However, the All India Kisan Sangharsh Samanvay Samiti, a federation of 193 organisations, is not participating in the protest as they do not want to create problems for the urban population. Let us look at a few demands of the farmers:

The most common term associated with farmers’ protest is loan waivers. Before every election, politicians across the party lines promise loan waivers to the farmers. In the recently concluded Karnataka elections, JD(S) had promised farm loan waivers within 24 hours of taking office. How much of that was fulfilled you ask? Do, I even need to go there! So, the protesting farmers are demanding a one-time complete loan waiver.

The outstanding loans are one of the most common reasons for farmer suicides. Rather than giving a blanket waiver, BJP had committed to waiving off loans of marginal and small farmers. This policy was far better than giving loan waivers to the rich farmers. However, economists and bankers have always argued against any form of loan waiver. It does make sense as loan waivers can never be sustainable in long term. More on that later!

Every farmer protest has a demand for implementation of Swaminathan Commission Report. One of the key recommendations is offering minimum selling price (MSP) of cost plus 50% of the cost. So, to explain it in simple terms: If the cost of production is Rs 10, 000, the minimum selling price should be at least Rs 15, 000. The government has already agreed to the 1.5 times MSP, but there are some differences with farmers in calculating the cost of production. While MSP could be a way to ensure that farmers can generate sufficient income, it still cannot be a permanent solution.

Other demands by the farmers include free electricity for pumps, compensation for losses due to natural calamities such as hailstorms or unseasonal rains. During the recent protests, images of farmers dumping their vegetables and dairy products on the roads have emerged. In our country, where lakhs go hungry, vegetables and milk were wasted to make a point. It would have been better if these food items were distributed for free to the poor.

Feeling sad for the farmers whose milk has been snatched and surprised on the sick mentality of Congress workers for wasting so much milk !

What kind of protest is this ??? pic.twitter.com/ckfFWLAZH7

Both, Congress and BJP have tried to play politics over the protest. As has been the case with any protests in last four years, Congress wasted no time in gaining brownie points by ‘joining the cause.’ Several videos and images of alleged Congress workers forcefully destroying the vegetables and spilling the milk on road have emerged. BJP has accused that the Congress is trying to instigate the farmers.

We will avenge the deaths of farmers, who lost their lives in Mandsaur protest last year, by winning the elections in November. BJP will be thrown out of the state: Jyotiraditya Scindia, Congress in Mandsaur. #MadhyaPradesh (6.6.2018) pic.twitter.com/yMqA4d2eK5

Congress on its part has blamed the Government at the centre for turning a blind eye towards the situation of the farmers. They have accused the Prime Minister of forgetting the promises he made to the farmers. They termed BJP’s accusation of Congress inciting farmers as an insult to the protesting farmers. Notably, neither political party spoke about creating long-term sustainable solutions for the farmers.

a. Productivity per unit of land:

Raising the productivity per unit of land has to be the engine that drives agriculture out of the current mess. The most crucial problem in raising the productivity is the size of each farmland. According to the 2010-2011 census, 67 percent farms are below 1 hectare in size and another 18 percent are under 2 hectares. This means that the owners of these farms would be unable to spend on getting a lot of productivity. Even if they could, the size of the farms makes many methods non-feasible.

The ideal solution would be to develop alternative employment opportunities for these farmers. These would allow farmlands to be consolidated to larger sizes ensuring that productivity is increased. Developing agro-industries, rural warehousing, rural industries will create employment, generating more income than the present farms could. So, why is this step not taken yet?

Votes are important than anything else as long as there a several elections in the country. Perhaps, if there was only one election, things could be different. Small debt-ridden farmers are consolidated vote banks that can be won over by promising loan waivers and other freebies. Why eliminate a problem, when you can leverage it for decades?

Apart from complete loan waiver, subsidies is another aspect that is marketable during elections. According to a study, Rs 16,300/- per hectare is given as subsidies annually. These include fertilizers subsidies, seeds subsidies, interest rate subventions, etc. Improving irrigation facilities and drainage management will have a better long-term positive impact on the farmers.

While farmers are demanding free electricity for pumps, a World Bank report states that excessive drawing of water can impact the water table leading to new crisis few years down the line. The focus rather should be on more crop, per drop.

The agricultural marketplace is skewed and needs to be more vibrant. The consumers believe the prices are expensive, whereas the farmer may have received sub-par prices. Farmer being exploited by the traders and middlemen is a problem across the nation. Although Farmers’ Market is now a common sight in many cities, more such steps should be taken by the government.

The lack of marketing and branding at farm level is evident as corporates who brand the same produce earn thrice the amount than the farmers get for paddy. Facilities should be developed at the farm level for the farmers to process the products and add value to it. Setting up processing units will not only benefit farmers but generate alternate employment opportunities in the rural area.

The problems in the current agriculture are prevalent at every stage and every aspect of farming. The political parties such as Congress boast of the huge loan waivers given to farmers under their rule, while completely ignoring the fact that they are making the situation far worse. If after 70 years of Independence, the person who ensures that we get food on our plates goes hungry, the policies have failed terribly.

The agriculture sector will become even more unsustainable if the focus remains on loan waivers. The ruling central government was earlier believed to have been against loan waivers and was motivated to bring grass root level changes. But, even it is now being forced to jump on the loan waiver bandwagon due to the pressure from the opposition. It is time for next-generation entrepreneurs and innovators to get out on the field and help the farmer make agriculture profitable once again.