Sports is a unique living form in itself. Games often transcend national boundaries, players become larger than life cult figures and passion simmers. While mass games like Football and Cricket have their dedicated following, the story of tennis is no different. Though played between only two or four players at a time, Tennis has a cult following which rivals cricket, if it does not better it. But,  as a tennis fan, I can with pride say we are very fortunate to be living in the best tennis time possible. Roger Federer, Rafael Nadal, Novak Djokovic, Andy Murray, Stan Wawrinka, Jo-Wilfried Tsonga et al have been playing amazing games time and again over the last decade. With so many amazing players playing simultaneously, and with each game being so competitive as well as entertaining, there is little a fan or sports lover can ask for more.

Each Grand slam has its own charm. Though Wimbledon remains the most awaited, acclaimed and watched grand slam, I have loved clay court games more. Not only is it more challenging, it also gives you that factor of unpredictability which makes tennis the beautiful game it is.

A clash between Nadal and Federer has the same excitement that a game of Sampras and Agassi had. Sampras, albeit being the world’s best tennis player, never won a French Open title. Roger Federer has always been compared with Sampras for being the world’s greatest. And it will not be an exaggeration to call Federer the best tennis player of all time. But when it comes to clay court, the stutter kicks in. You doubt this title when you see Nadal crushing him ruthlessly on a clay surface, teasing him like a cat on a hot tin roof. 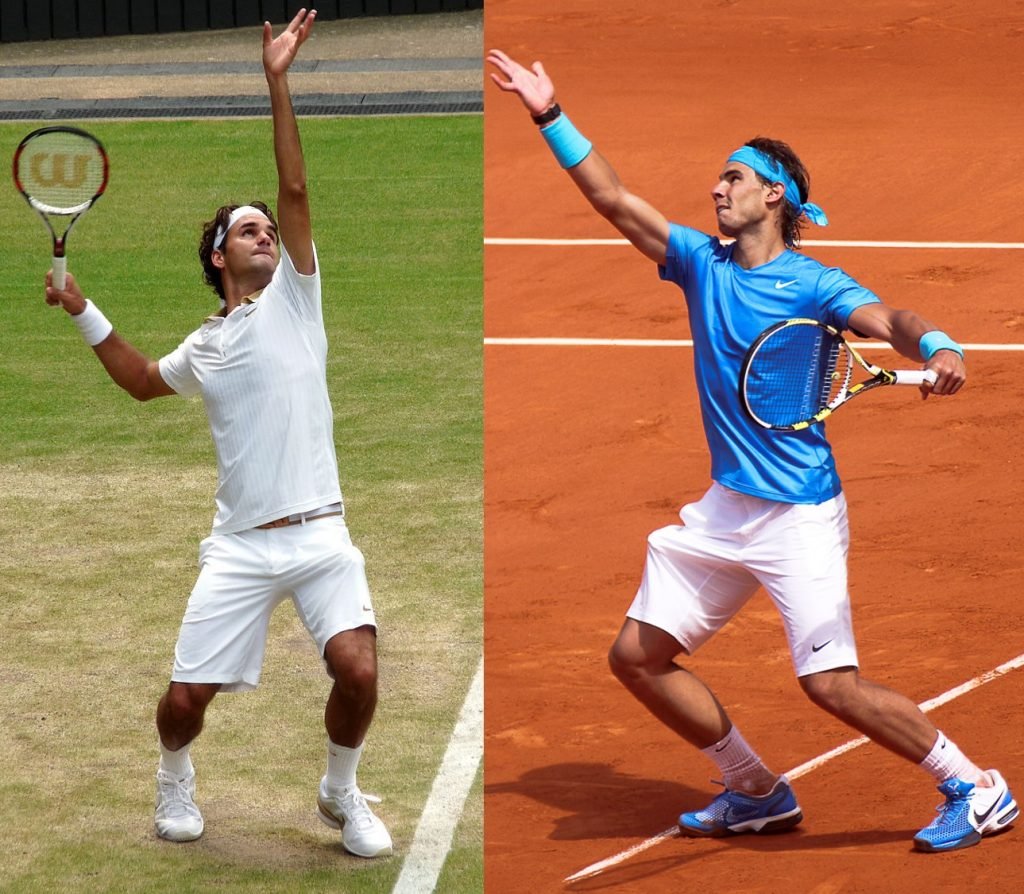 If you wind the clocks a little back in time, Federer and Nadal have had some epic encounters. But statistics cannot determine which is the better player of the two. Each of their game has been brilliant. Some of these games will never be erased from the minds of tennis fans. Whether you are a Federer fan or an ardent Rafa supporter, you cannot help but admire their games, their shots, the rallies, each point they win and how they emerge winners at the end of each set and eventually the game.

You feel happy that the player you were supporting won, but a tinge of sadness for the player that lost. There is rivalry, there is competition but no jealousy or hatred. That is the way these two play. Even if you are not a regular tennis follower, watch them play whenever they meet in semis or finals. The intensity reflects, and somehow gets to you. Here is a list of their best five clashes:

Through sheer hard work, Roger Federer has made his way to top of the chart and is currently world number 1. He is young, he is energetic, he is perfect. He is winning everything that comes his way. This rolling stone gathers no moss. Third round of Miami Masters, the juggernaut meets a Spanish teenager Rafael Nadal. A 17 year old kid ranked 34 is facing the world number 1 for the first time. And defeats him in straight sets.

Yes! In Straight sets. Whoa! The fans go berserk. Tennisdom goes into a wild mode, an absolute meltdown. Who is this kid, whose game just created the biggest upset of the tournament? And those who thought, or rather expected, that this upset was one off were so wrong. It was repeated again. And again. And again, till this 17 year old, in near future managed to secure that number 1 spot. This was also their first ever clash.

This clash was special because it was for the very first time that Rafa and Federer were meeting in a grand slam final. After losing the first set, Rafa won the remaining three and won the game. A clay court after all. After this, they met in every Wimbledon and French Open finals between 2006-2008.

It was a kind of routine for Federer now to lose Nadal in French Open. When they clashed in Wimbledon in the year 2007, Federer had lost to Nadal in French Open finals thrice already. A desperate situation where he had to win this one anyhow. And he did win. A five setter proved to be a much needed win for Federer.

This year was special for other reasons too. This has been the most successful year for Federer against Nadal. Not only had he won three of the five matches that they played against each other, but Federer also defeated Nadal on clay court at Hamburg Masters. Federer also broke Nadal’s unbeaten streak of 81 games on a clay court by defeating him in this match. But again, in the French Open in that year, Nadal defeated Federer.

Until semifinals, Federer has it easy against Roddick, while Rafa struggled to win against Verdasco. Rafa stretched his limits to win this match. Playing a five setter, he managed to somehow eke out a win. Everyone had thought Rafa was a spent force. Federer was touted to be the favourite for the title. A match that was considered to be a cakewalk for Federer not only turned out to be a difficult game to play, but he also ended up losing it. It was yet another five setter between the two, and yet another exciting match that Federer lost 6-2 in the last set.

Words cannot describe this clash. Probably the most epic game I have seen. Longest Final in the Wimbledon history (4 hours, 48 minutes), the match was special for many reasons. Rafa won first two sets comfortably (6-4 6-4). But Federer made a comeback and how. He won the next two sets and was close to winning his 6th consecutive title.

But the table turned around. After 7-7 in the last set, Rafa managed to break Federer’s serve and served for the title. The final score read 6-4 6-4 6-7 6-7 9-7 to Nadal. This match had some epic tiebreakers, the longest rallies, some zooming serves and really classy shots. This was also Rafa’s first step towards World Number 1 ranking that Federer was holding on to too dearly.

If they ever spoke about Epic most clashes of all time in Tennis, at least one (or two) will be that of Federer-Nadal.

Read our other related articles on the tennis greats, here.