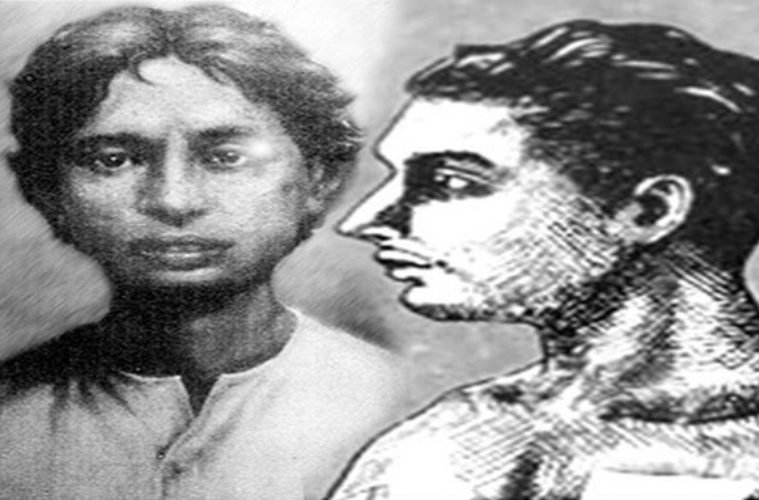 It was the February of 1906. A grand exhibition had been arranged at Medinipur, Bengal. The intention being to hide the injustice of the Britishers ruling India. On exhibition were articles like pictures and puppets which created the impression that the British rulers, though foreigners, were doing much to help the people of India. This was one of their many ploys to keep Indian public content. Thus, trying to prevent any uprising matching the scale of 1857.

The Exhibition was meant for many British MP’s and aides of the king. It was to make them realise that British imperialism was in fact a boon for the Brown and Black people. That they were being enlightened because of British occupation.

Suddenly, a young boy of 16 appeared in the room. His hands were full of handmade pamphlets and bills that bore the title of ‘Sonar Bangla’. He started distributing them and shouted slogans of ‘Jai Hind’ and ‘Vande Mataram’. The handbills were written to expose the cruelty of British rule. A police constable tried to stop him, but he was way too quick to be matched by one pot-bellied constable. At last he was caught and his handbills were taken away from him. But the boy was hellbent on getting his name recorded in the history books. Thus, he jerked his hands free in one swift motion, punched the constable’s nose and roared,

“Beware, don’t touch my body! I will see how you are going to arrest me without a warrant.”

The punched badge-bearer lurched forward to grab the boy but just like a puff of wind, the boy disappeared. Common people need a spark which ignites their passion, and this proved to be that ‘spark’ for the oppressed people at the exhibition. As the people burst into cries of ‘Vande Mataram’, and ‘Jai Hind’, the officials had no other option but to retreat humiliated.

Later a case was filed against the boy but he was set free because of his tender age. 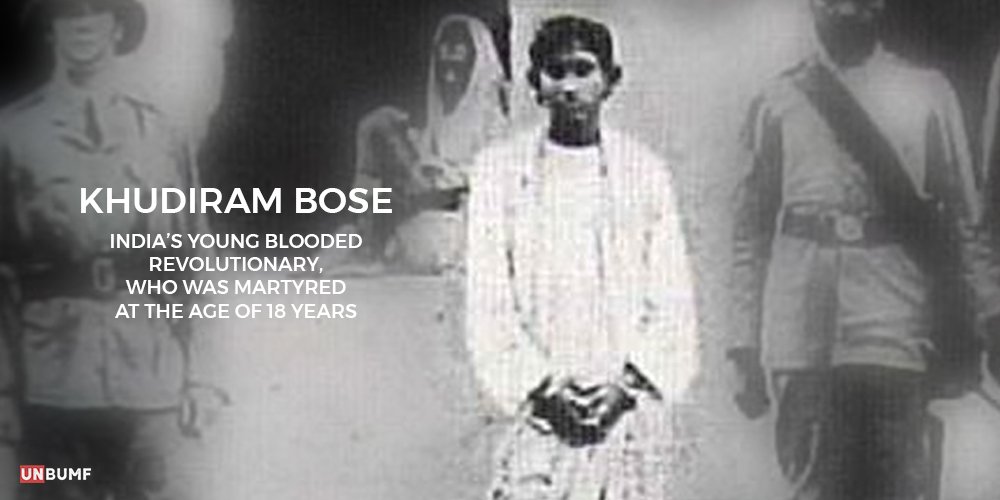 This passionate young boy who tried to foil British Plans at the Medinipur exhibition at the age of 16 was ‘Khudiram Bose’. Born on 3rd December 1889 in the village Bahuvaini in Medinipur district, Khudiram Bose lost his parents at the age of 6. He was brought up by his elder sister Anurupadevi.

Khudiram was born to love and fight for his country. Since an early age he was initiated into revolution. The cry of ‘Vande Mataram’ which was then heard everywhere, caught his imagination. He watched with interest, the different forms of protest against the partition of Bengal. The epic ‘Anand Matth’ had a great impact on his life. He decided to dedicate his life to the service of the Mother. He admired the way revolutionaries, who were determined to organize patriotic men, fought bravely against the foreign rulers to free the country from slavery.

These revolutionaries had sacrificed their family, relations, wealth and everything. They had dedicated themselves to the service of the Motherland. Men of noble character and pure life were not afraid of any hardships. Khudiram too desired to become one of them and soon joined their ranks. They started invoking patriotism amongst common people by promoting ‘Vande Mataram’. As the message of ‘Vande Mataram’ spread, the British became more and more cruel. They proclaimed it was treason to shout ‘Vande Mataram’. Thus, in the eyes of the British saluting our own Mother now was an act of treason!

Khudiram was soon to rise above distributing pamphlets and this event had a great impact on his life. ‘Vande Mataram’ was also a very famous newspaper published by ‘Bipin Chandra Pal’ and ‘Maharshi Arvind Ghosh’. It was very well known for its radical thoughts and openly condemned the act of injustice by the British. In 1907, British charged ‘Vande Mataram’ for treason and the trial was held in police court of Lal Bazaar in Calcutta.

Everyday thousands of youngsters gathered outside the court and made deafening noise by shouting in unison, ‘VANDE MATARAM’. By this time, in Calcutta, the Chief Presidency Magistrate Kingsford had gained notoriety by passing out stiff sentences against the nationalist activists. Lathi charge was almost a ritual which was necessary to carry out on every day of the trial. On 26th August 1907, crowd had started to gather as usual. Chanting had not started yet. But somehow a policeman was in search of some action. He started beating a young man with ‘Lathi’ suddenly.

‘Sushil Kumar Sen’, a young boy of 15 couldn’t see it and questioned the officer, “Why are you beating him?” The arrogant officer tried to beat him too. But it further provoked young Sushil. He pounced on the Englishman and gave a mighty blow on his nose. The brit was awestruck. A boy half his size had taken his lathi and was giving him a taste of his own medicine by now! Other men in uniform came to the rescue of their colleague and the boy was arrested. Sushil kumar had broken a major law by attacking a person of the law. Kingsford ordered him to be caned. Sushil faced each lash with the cries of ’Vande Mataram’.

He was left barely alive after the punishment. This enraged the revolutionary factions. Common people had started to wake. National college, in which Sushil was a student, was closed for a day in his honor. He was presented gold medal by Srendranath bannerji in a meeting and his bravery was praised.

Khudiram was working with a revolutionary group called ‘Yugantar’ at that time. Yugantar had decided to kill Kingsford now. Kingsford was transferred to Muzaffarpur as soon as British intelligence got a hint of danger. ‘Khudiram’ and ‘Prafula Chaki’ were selected to do the job of killing Kingsford. They followed their target to Muzaffarpur in Bihar.

It was on the night of April 30, 1908 that Khudiram and Prafulla approached the European Club at Muzaffarpur. They waited in the bushes for Kingsford’s carriage to come out. They saw a carriage approaching and thinking it as Kingsford’s, and they hurled bombs at it. The carriage with its passengers was destroyed but it was not Kingsford who was killed. It killed two European women – Mrs. and Miss Kennedy.

A massive manhunt followed. Khudiram ran non-stop for 50 Kms. to Beni. He was exhausted and hungry. He bought some fried ‘broken grams’ (भुने चने) and listened to a few people talking there about how two ladies were killed last night. Young Khudi enquired about last night’s incidence. The shopkeeper grew suspicious. Boy was never seen in the village before, was looking exhausted and was enquiring about the explosions. Greed of reward made him call local police while Khudi was having water. While being arrested, he tried to take out his pistols but failed and both of his pistols were seized.

Khudiram was brought by train to Muzaffarpur under a heavy guard. People had assembled in thousands to see the boy who had thrown a bomb for the first time in India against the British. As soon as Khudiram got into the carriage to go to the police station, he shouted with a smile, ‘Vande Mataram’!

‘Kalidas Bose’ took up the case of Khudi’s defense. But the result was already known to everybody. After two months of mockery, verdict was delivered. Khudiram was still smiling. Judge was compelled to ask, “Do you understand what this means?” A prompt reply came, “Better than you”.

“Do you have anything to say?”

“Yes. I want to tell a few things about making bombs.”

Judge had to bar Khudiram from giving his last statement. Kalidas Bose appealed in the Calcutta High Court. It also confirmed the sentence given by the lower court but the date of execution was decided to be latest by 11th August 1908. Khudiram’s last statement read:-

Like the heroic Rajput women, I wish to die for the freedom of my country. The thought of the gallows does not make me unhappy in the least. My only regret is that Kingsford could not be punished for his crimes. I want to die soon so that I come back again to fight the British… 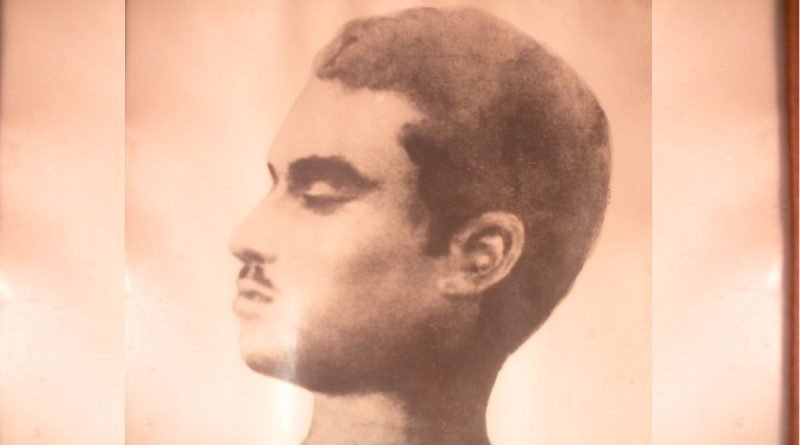 Prafulla escaped the police for two days after the incident. Every time police were close enough to capture him, he managed to escape. Wherever he went, police chased him. Just when he was on the verge of getting caught, he preferred to take out his pistol and shoot himself than going to the gallows. The police cut off his head and carried it to Muzaffarpur.

Prafulla Chaki was born on December 10, 1888 in the Bihari village of Bogra district, now in Bangladesh. He was expelled from Rangpur Zilla School in Class 9 for taking part in a students’ demonstration that violated the Carlisle Circular of the government of East Bengal and Assam. Then he joined Rangpur National School where he came in contact with revolutionaries like Jitendranarayan Roy, Abinash Chakravarti, Ishan Chandra Chakravarti and became a believer and practitioner of the revolutionary philosophies.

It is a shame that young generation of Bharat don’t even know about them. May there soul rest in peace.