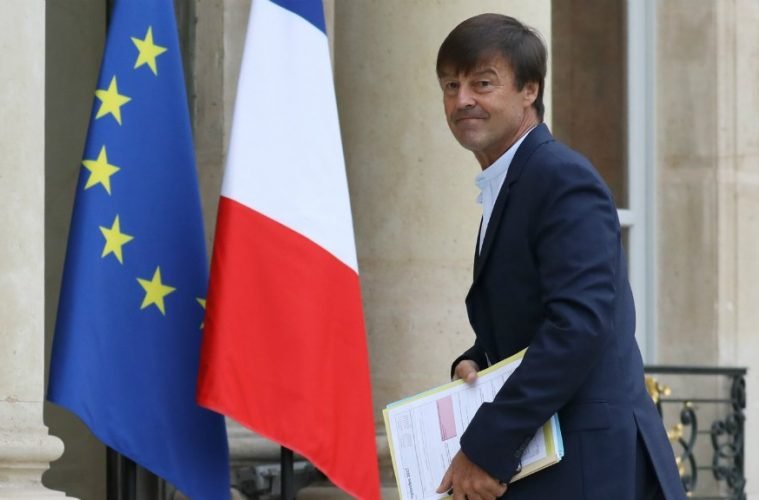 French Environment Minister, Mr. Nicolas Hulot, resigned on live radio on Tuesday. An environmentalist and a former host of a popular TV show, he was seen as one of the most prominent members of the Macron government. His departure comes as a big blow to the approvers of the French President Emanuel Macron.

Hulot was previously invited to the governments of Jacques Chirac, Nicolas Sarkozy and François Hollande. But he turned all of them down. After the USA withdrew from the PARIS agreement, Macron was seen as the global advocate for saving the planet from the climate change. Macron was the first to convince the famous environmentalist to join him in the government.

The former minister’s resignation was no short of drama as he told “the inter radio” anchor about the secrecy of his resignation. He said that not even his wife knew about his decision to leave the government. This comes as an unprecedented move, as neither the President nor the Prime Minister was informed by Mr Hulot beforehand.

What led to the resignation?

“I don’t want to give the illusion that my position within the government suggested that we are answering these problems properly, so I’m leaving the government. I no longer want to lie.”

Mr Nicolas’s resignation came only after a day from the announcement of the government to ease the restrictions on hunting. In his live interview to the radio, he said that it reflected the power of lobbyists in affecting the policies of the government.

He  also reflected on the government’s failure to address appalling issues pertaining to biodiversity, soil, and the abuse of pesticides. Adding that the issues of environment are always on the least priority of the government. Hulot commented that this government is no different to any government in prioritising economy over clean energy.

He said “We’re taking little steps and France is doing a lot more than other countries, but are little steps enough? The answer is no. I hope my departure will trigger deep soul-searching by our society on the realities of our world.” Despite of it all, his optimism remained undeterred.

Reactions to the Resignation.

President Maron, who is on a two day state visit to Denmark, spoke to the media and said “It’s a personal decision that he took this morning and if I chose Nicolas Hulot 15 months ago it’s because he is a free man. I respect his freedom.” Defending his government’s actions and of his own, he said “I think that in 15 months, this government has done more than any other on the subject (of the environment) in the same period. More than any other.” Macron added “I hope I will be able to count on his commitment in another form.”

French Government’s Spokesperson, Mr Benjamin Griveaux said “I hear his disappointment but we must give him and the government credit for what has been done over the course of a year.”

Is the World doing enough?

Starting off with some facts ;

a) The world carbon dioxide level in the atmosphere stands at 408 ppm. That’s the highest in 650,000 years!

c) the Arctic ice sheet area is getting smaller at the rate of a whopping 13.2% per year.

d) the sea level is rising by 3.2 millimeters per year .

The list goes on. Such is the extend of the issue at hand. But are the ones in power concerned? The resignation of Mr Hulot comes at a time when the world focus is far from climate change. And even though France is at the forefront of “#MakeThePlanetGreatAgain”, the resignation of Mr Nicolas reaffirms the significance of the question “is this enough?”

In most of the third world counties, like Africa, the over dependence on coal as a source of energy still remains a serious concern.

With Trump in power in the USA, climate change action has had a huge set back. He made his intentions clear to the whole world by dropping out of the Paris agreement of 2015.

India, on the other hand seems to be well on tract with its commitments in the Paris agreement. She could achieve a 40% non-fossil-based power capacity by the end of 2018, a whole 12 years early to its commitment of 2030 in the Paris agreement. India owes this success to continued abandoning of coal projects and reducing cost of solar based energy.

The Nuclear proliferation, the over dependence on plastics, the ever shrinking green parts of the earth, the use of non renewable sources of energy; all signify the dead end the world is headed towards .

In conclusion, the need of the hour is bringing back the focus on Climate change. And ACT NOW.