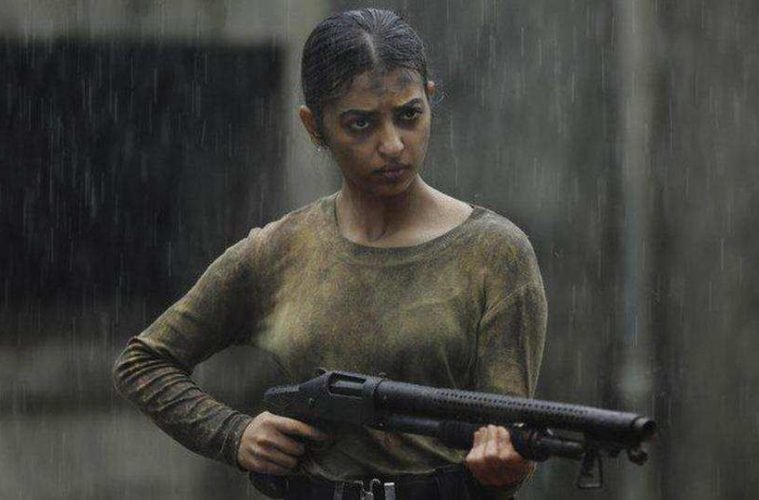 Ghoul Review: This Devil Will Bite You Off And Possess You For A While

Ghoul is the closest we have come to representing the millennial brand of horror on screen. As much as I loathe the aeonic use of this term, millennial horrors are subtler but more agonising than ever. Which is perhaps why this mini-series successfully lays the foundational brick for this niche. Ghoul is a 3-episode long horror-action-thriller offering by Netflix in India, created by the self-confessed fanatic of the genre Patrick Graham; released on 24th August 2018.

Ghoul is a re-incarnation of Indian horror

I have just spent a quarter of an hour thrice to go through this miniseries (which is just a fancy way of saying I watched the 3 episodes right when they were made available). I would usually assume that for a series of this length, binge-watching is the way to go. But I was proven wrong by how gripping the story was. I have had to pause multiple times to catch my breath alone.

The opening is a surprise in itself. Treading the fragile territory of religion, the plot fearlessly opens in a dictatorial regime. The government is curbing freedom of speech (among other fundamental freedoms). And I want to love this courageous storytelling, but there’s only so much you can contain in less than 3 hours. The creators choose to prioritise the horror and thrill in the plot over the politicisation of it. And that is enough. If we can have stories that begin to bring unconventional genres like horror to heavily political plotlines, I think that creativity is enough alone. And yet, even as I sit on the edge of my seat through the entire second and third episode, I want more political juice.

One could say the beginning spoilt me into expecting an Orwellian and dictatorial nightmare. But it is comforting to know that there are no hidden agendas, as the plot progresses. This is certainly not India’s finest foray into psychological horror. After all, nightmares are not an alien concept. Some of our favourite tales of horror (read: Aahat, Shh..koi hai, Fear files, before they became a parody of their own self) revolved around nightmares and superstitions.

The ghoul just takes the form of its victim

There is a persistent unevenness in the flesh that each character has to offer (ALL PUNS INTENDED). Radhika Apte (who was previously shining in Sacred Games) in the series, along with the other characters often look like loose ends, is (with such great actors) a wasted potential. This makes me question the length of the series. Would it have done better as a movie where I wouldn’t bother about the back-story of each of these characters? Would it have done better as a longer series where the depth of the characters would get a chance to come to the surface and put me further in moral quandary? But I decide that this is exactly the size of the piece of pie the creators intended for the audience to taste.

Now that we have had solid plots in Pari and NH10, the audience is only going to evolve. And so, I believe that this audience would have loved to see some depth in the subtext. Some more nuance in the action too. For instance, how do you explain the fact that this apparent alternate/dystopian reality is flawed in the way the security functions? How do you explain the cliched representation of religious composition: that the only other woman leader on the team was a Bengali woman who had her grammar messed up on genders? What justification can there possibly be for the convenience that all the prisoners and suspects only were Muslims and everyone else on team was a Hindu?

The geographical concentration of the plot reminded me of P2. However, the reminiscence was only the strongest in its psychologically traumatic bits. It was faintly parallel in how they ended too. The idea was so strong, the sequence so gripping and I was so choked down my throat by the end of the third episode, that recovery from that world took a couple of waking hours, writing this and a few hours off my night’s sleep.

Word of caution: As a naive audience this is not obvious, but you should also know this: these miniseries by Netflix are a great power move. Apart from establishing Radhika Apte as the poster-girl of unconventional screen stories, it is establishing its dominion over counter-narratives content. Is it dark? Yes. Is it disturbing? Hell yes. Is it exceptional? No, but we don’t mind settling for mediocrity just this once. That said, I absolutely disapprove of the promotion of the series. A gruesome set-up in public loos is just…disturbing, to say the least.

And if by the end of it, you are not in a quandary whether or not to wish for the next season, you’re not watching it right. Which means, as you might have already guessed it, it is a must watch!