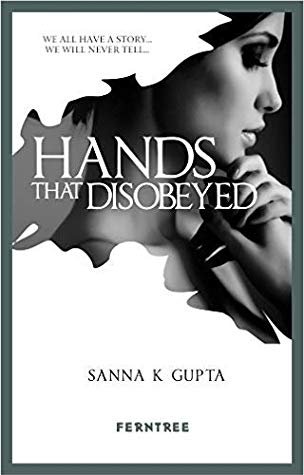 Hands That Disobeyed Book Review: A Ride With Twists Of Epiphany

What do you do when the only person who taught you the meaning of love is dying and fast? This is exactly what Dr. Rizvi is going through. Even though he is one of the top neurosurgeon in the country at the age of 25, there is absolutely nothing he can do to save the fast deteriorating health of the love of his life. But this is not all. The situation is worse for him, because the love of his life is not his wife, it is his boss’s.

Yes! They are both married, to separate people, yet in love with each other and the woman is ailing from a disease that cannot be controlled. This is what the racy and complex novel “Hands That Disobeyed”, by the first time author Sanna K Gupta, is about.

To say that Hands That Disobeyed by Sanna K Gupta, is about infidelity, is to underestimate the depth that the story presents. The novel though only a few pages above 100, carries within itself the life, love and philosophy of multiple characters from 3 families. At the centre of it all is the character of Mrs. Saha, through whom everything starts, ends and flows.

Mrs. Saha (or Noorie, as her husband likes to call her) is a 50 years old charismatic socialite, who is married to a now rich businessman Bijoy Saha, in Delhi. She does everything that a rich and elite do, but better. She and her life are the envy of every woman around. But before turning into an affluent fore-runner of charities, she was an author to a column in a magazine.

But only a few people know that even before that she was an English teacher for kindergarten at an Army school. She has definitely been married through all of this, but has been a woman of her own.

Then there is Bijoy Saha. He is a successful businessman, a devoted husband and an emotionally strong man, who will go to any length to get his wife what she wants and needs. He is someone who is used to and okay with her quiet moments, while around and away from him. He is her confidante about a lot of things in her life and thus, is a steady rock for her.

There is also Dr. Rizvi. He is one of the best neurosurgeons of the country, who is employed at the hospital owned by the Sahas. He was born in Lucknow to a tailor, who wanted his son to take up his art with needle and take-over his father’s business. According to his father working with a needle is an art and only two kind of people can do justice to it, a tailor and a doctor. So Rizvi decided to be a doctor, because tailoring was not for him and living in Lucknow for the rest of his life, was definitely not for him.

He is 25 and married to Rafia, whom he met in London while studying. They have shifted to India after his education and some work-ex because Rizvi wants his talents to be utilised for the citizens of his country. Thus, they are now living in Delhi.

The story is about an eccentric Mrs. Saha (full name Harnoor Saha), who is a very private person and thus no one can get close to her, unless she wants them to be. Which is exactly what happens with Dr. Rizvi. He is one of the few people whom Mrs. Saha lets into her psychedelic world. From there starts a romance that touches the deep philosophies of love and is platonic. It is clear that Mrs. Saha has fixed ideas as to how she wants her love to be. It is deep, philosophical, not about physical contact, very matched on ideas, unconditional, unapologetic and not necessarily with her spouse.

She says that women have this ability in them to see beyond what the borders of the society tell them to. They function at a surreal level and just know when they have found someone who is their person, even if they are not physically married to them. Mrs. Saha has gone through a phase of epiphany related to love in her life and the book talks about the same throughout, through the conversations that her and Dr. Rizvi’s character are going through.

The character of Mrs. Saha is so free from inhibitions that as a reader you wish that you could be like her in your real life at all times. Mrs. Saha seems to be in control of things around her all the time, while she herself is going through a bad bout of Alzheimer. Yes, you read that right. The woman who is everything anyone wants to be in a world of helplessness, is in control of people around her while her brain has a disease that is slowly taking away control of her body from her.

Even in her stages of worse episodes of Alzheimer, she is able to make sense to people and they seem to be falling more in love with her. However, what seems to be of utmost importance to her is passing on her epiphany of love to someone else. Someone who would live long after she has ceased to do so. The plot is riddled with the times of her life which led her to be in a certain way at a certain time, including why her name became Harnoor.

The book beautifully talks about how our society views a woman. There is a set parameter to how a woman or a lady is supposed to present herself from whatever walk of life she might belong to. She can be a rich and affluent elite, a doctor’s foreign national wife, a daughter of rich parents with everything at her disposal, a daughter-in-law in a liberal house or a house help’s daughter; in the end, a woman needs to prove that she is worth her part in a society that has rules.

The book in part, is a satire on the society that wants women to be educated and modern in their thinking, but she should be traditional enough in her choice of clothes and her values. There are a few lines to that effect in the book, that go like this:

The word “modern”, when used for an Indian woman, was usually that of a flamboyantly dressed girl in somewhat revealing clothes. On the contrary, the image of a traditional, respectful Indian woman was to completely transform giggles to a serious look. A face that is only to look pretty in veils of etiquettes, a face that should talk less but be expressive, a face that belongs to a woman who should only look down at her feet, as if she has to keep a count of her toenails every now and then.

She is to greet everyone with a fake smile that should look very warm and genuine. As a Saha daughter-in-law, I was supposed to strike a balance between my modern and traditional values.

The woman definitely can understand what is being asked of her, but what she does not understand is the “why” of it all. This is why when a reader is going through the novel, they understand the transformation that the character of Mrs. Saha is paining for and finally achieves.

What I Liked In The Book:

There are a lot of things that one ends up liking in Hands that Disobeyed. The mere fact that the central theme of the book is bound by some very strong female characters while the narrator is a man, is amazing. Another thing is that even though this is her first book, the author seems to have captured the depths and complexities of some of the characters beautifully. Then, one definitely falls deeply in love with the idea of love, emotional connect,  platonic relationships and stories that can not be told, openly.

Even though the plot is something that is interesting, there are a few things that did not go down well with me. One of the major parts that I did not understand is how a single person, who is deeply controlling, has no one who despises them. Everyone seems to be in love with a person who is mostly distant, strict and witholds love from some of the close people in her life.

Another thing that was off for me was the strict limiting idea that Mrs. Saha has about how her love story will be and should be and how she starts to pull away when the other person wants something different from her. Lastly, what definitely made me rack my brains were the very secure and understanding male characters in the book. The book has a very peaceful pace to it, where no male in her life, is seen questioning Mrs. Saha’s demeanour, even once.

But having said that, the book definitely takes you to a different place all together. It is filled with very interesting plot twists that no one ready for. Rather the book also explains its own title by saying that a persons’ hands disobeyed her from doing the normal everyday functions but rather turned into wings that helped her fly.

All in all, Hands that Disobeyed is a story that is multidimensional, layered and has deep complex characters, which makes it an interesting read. The flow between different eras of time, of the characters is binding to read. This is a story that is relatable for anyone who has had a love that can never be spoken about, out loud.

Find our other reviews on entertainment, here.