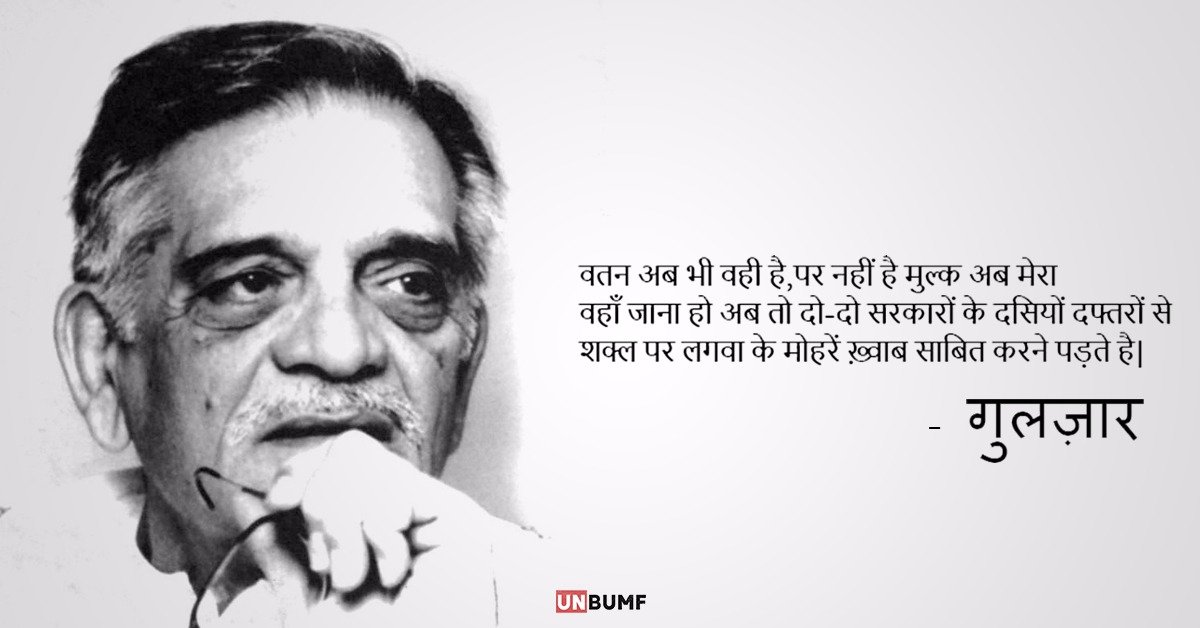 Happy Birthday Gulzar Sahab: You Will Always Remain My Favourite Poet Of All Time

I was perhaps in standard four or five when, during one of those free periods, a replacement teacher came to the class and asked us kids to sing, one by one. Now, singing was the forte of only a select few in the class. The rest of us, outside our bathrooms, brayed. Of all the songs, or rather poems that were sung that day in that hour, there was one that stuck. It was not sung by someone with a silken voice. That guy had passable voice, perhaps not yet fully distorted by onset of puberty. Nonetheless, it mesmerised all of us, more so the teachers who were sitting in the adjacent ‘staff room’. So much so, that the song was chosen as our morning prayer the very next day and included in the school diary the next year. That song, or rather the poem was:

There was something so simple, yet so profound and deep about the words in that song. Those words remained with me. I went home and often tried to memorise the song, pestering my parents if they knew that song. And I had it by heart in a couple of months. 24 years later, I do not remember all the words of that song. But I still know most parts of it by heart, seldom having heard it again. I am familiar with the vivid tune, and the memory of that song, attached to that hour. Unaware even to myself, that there was my introduction to Gulzar, his poetry. The magic that he weaves with words, with pen and leaves you wondering whether to feel sad or celebrate the pain. 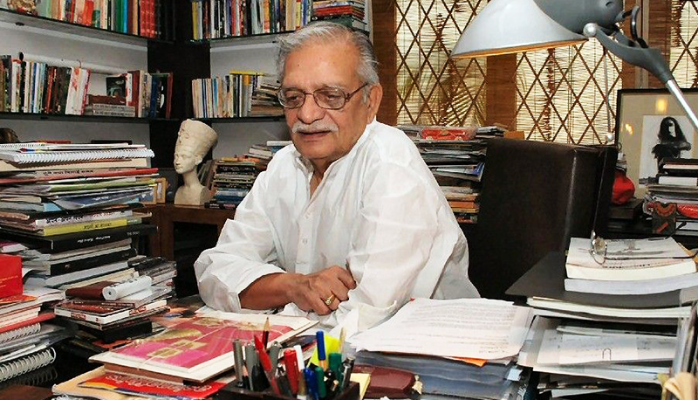 To the average reader, Gulzar is a familiar name, a name they have heard several times. But that is about it. No more. To the mass which understands and appreciates literature, Gulzar is revered, respectable writer who has penned many stories that keep churning emotions. A tip of the hat worth. That is all. Perhaps a little more. To the handful, who love literature, and hindi poems (that is a very rare combination), Gulzar has attained the status of divine. He is the Bible of free verse writing in hindi poems. And stitches words that cut through like a hot knife through butter. But the man himself would resist that.

Gulzar, born Sampooran Singh Kalra, is a self-proclaimed profligate, who has never been the favorite son of the family. As a professional looking to earn his daily bread, he started out, first by doing odd paint jobs at a garage and then by directing films with the legends like Bimal Roy and Hrishikesh Mukherjee. To any soul, that should have been achievement, working with directors like these two. Gulzar, perchance, never became a film director though. He started writing songs for films, songs which were crooned by the most sensuous voices of that time, songs that went on to become legends, like fables. 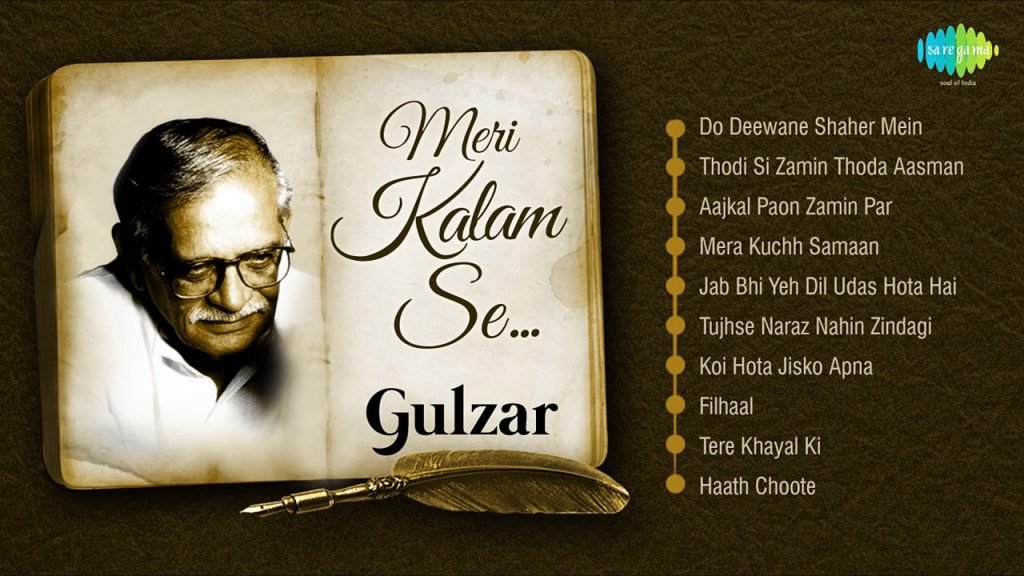 Then came an era which required mostly English words in Hindi songs. Gulzar Sa’ab then wrote ‘Dard-e-disco‘, an unforgettable fusion of Urdu and English.  He wrote songs like Kajra re, which had an easy mix of the simplest English and the toughest Urdu words. These songs are enough to establish his legend, his name among the best that the Earth has seen.

To a self-proclaimed fan like me, the worship does not stop with just his songs. We devour his ghazals, are all ears to the recitations of his poems, and read his nazms over and over again. To a  congregant like me, lines like बुरा लगा तो होगा ऐ खुदा तुझे, दुआ में जब, जम्हाई ले रहा था मैं– दुआ के इस अमल से थक गया हूँ मैं represents the pain, the fight, the essence of the barrier that we have put up with the maker, the Lord above all. It seems like Gulzar Sa’ab, with lines like, याद है इक दिन, मेरी मेज़ पे बैठे-बैठे, सिगरेट की डिबिया पर तुमने, एक स्केच बनाया था | आकर देखो, उस पौधे पर फूल आया है | is writing just the right measure of romance that we needed to show to our lovers.

At 85, Gulzar Sa’ab is no longer just a poet. That distinction he exceeded perhaps a decade or two ago. Or even earlier. He is a celebration for fans like me, to mere mortals like us who aspire to write, perhaps follow his free style and compose thoughts in such ease. To Earthlings like me, Gulzar Sa’ab is no longer a writer. He has become a style in himself. A style many have tried to copy, failed, given up and keep trying. I am in that list. And in that list too, of people who want to wish him a very happy 85th birthday. For us Gulzar Sa’ab is the easiest prose and the toughest enigma. For us, he is a notch higher than most, perhaps all. And for us, he is what his lines sum up in: 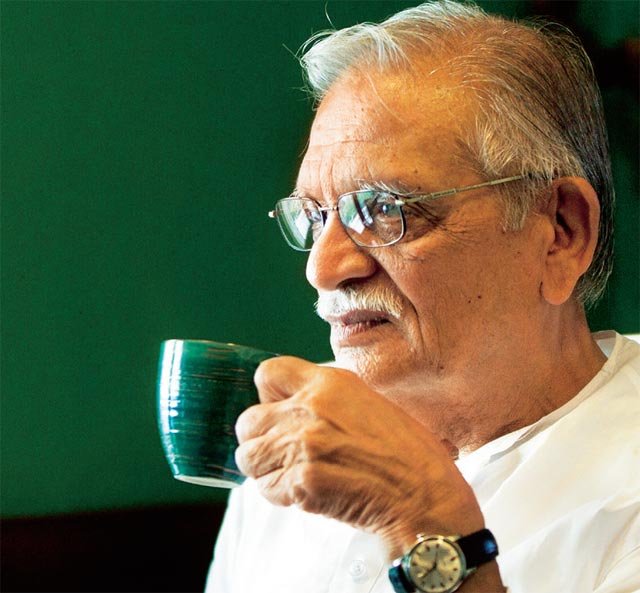