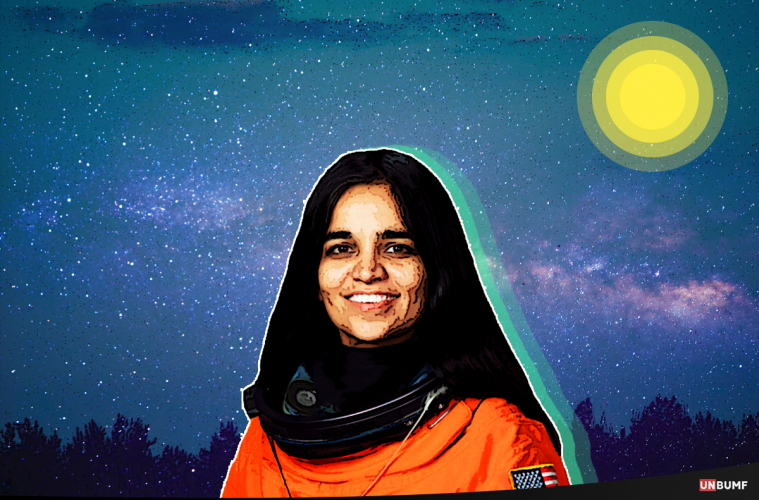 Happy Birthday, Kalpana Chawla! You Will Always Remain My Hero

It is March 17 again. And today is the birthday of one of my heroes. A day that instills me with more inspiration and life every year. The birth anniversary of Kalpana Chawla. The first Indian woman in space. Much has been said and written about her. We all know who she is. But today I want to describe what this young, brilliant astronaut means to me personally. And I believe, to so many other young girls of the country as well. 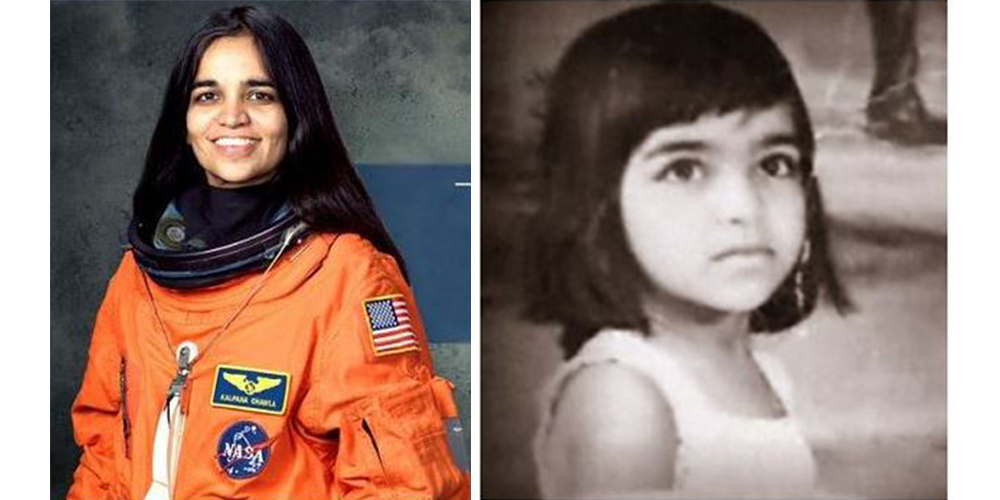 Kalpana was born in the small town of Karnal, Punjab in 1962. Her journey from being an inquisitive child in a small village to being a role model for every little girl in India; is heroic at the least.

A gifted child, she was drawn to science, airplanes and the infinite universe since her childhood itself. According to various accounts by her family, she used to star-gaze at night and was fascinated by them. She even decorated up her class in school once, with sparkling dots on black chart paper. Her own little sky!

Her fascination with airplanes was a result of the nearby Karnal Aviation club, one of the only flying clubs in India at the time. According to one of her early interviews, she was inspired by JRD Tata, who flew some of the first mail planes of India. Kalpana was admittedly inspired and fascinated by the contributions of the man. 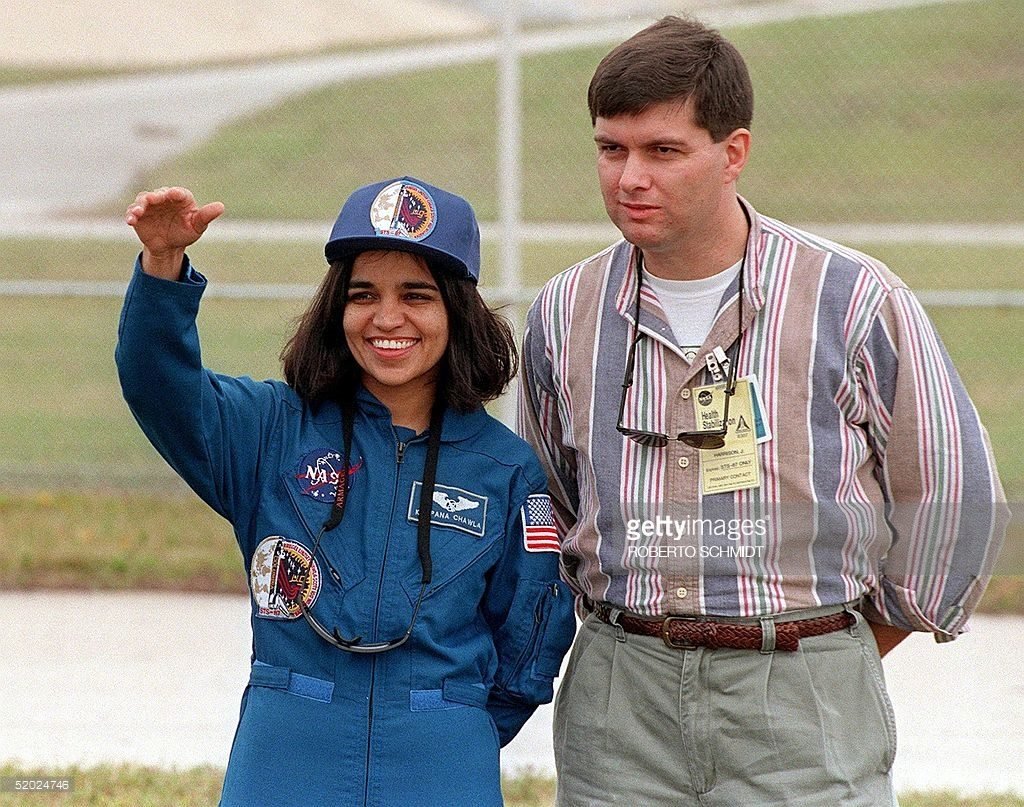 Always a diligent and intelligent student, Kalpana finished her 10th and 12th standards with flying colors. Despite opposition from her father, Kalpana wished to pursue an Engineering degree. To fulfill her childhood dream of becoming a flight engineer, she took up Aerospace Engineering at Punjab Engineering College. A career she was warned against because of the scarce jobs in India as well as the fact that she was the only female in her batch.

However, being a strong-willed and focused lady, she took up the course and excelled in it. Apart from her academics, she was involved in the Aero Club, the Astro Society as well as the college journals.

Her brilliant academic background, as well as her amazing profile and evident perseverance, made her an ideal student for her Masters. She was admitted to the Aerospace Engineering Program at the University of Texas, USA. Yet again, facing off against her family which was reluctant to send her abroad, she came out victorious and joined the program in the USA. Although a few months later than the required schedule. 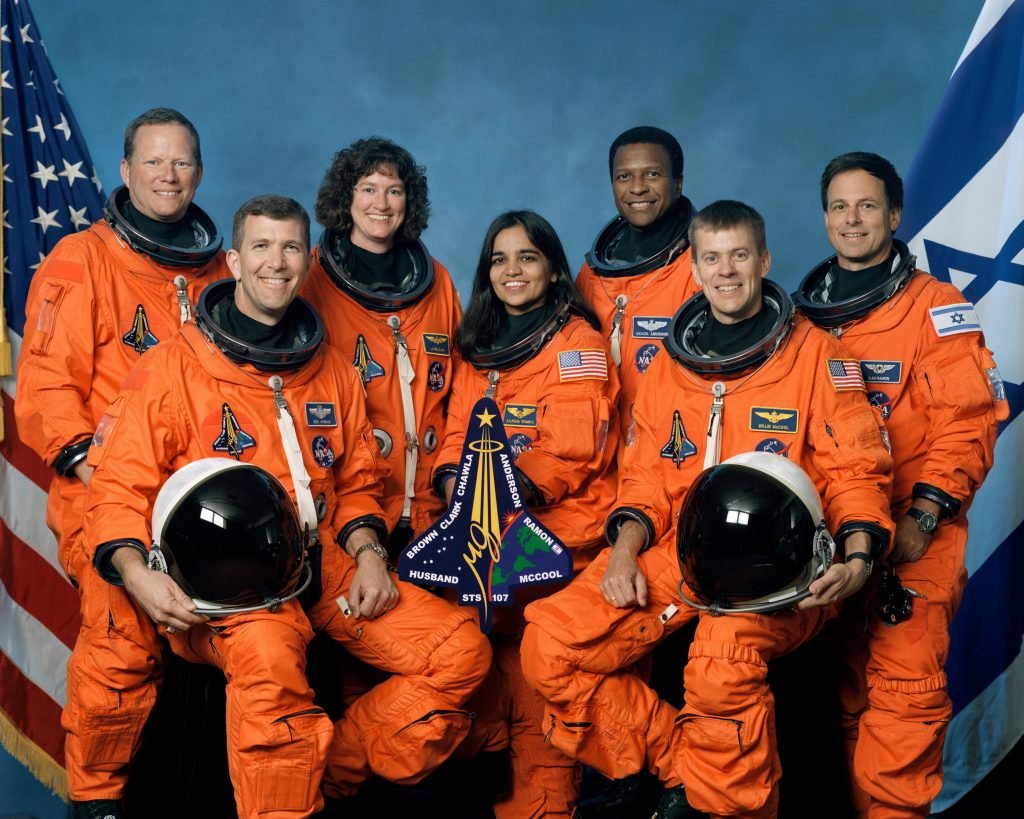 Kalpana finally made it to the United States for her Masters. Along with being close to her dream of becoming a flight engineer, she got closer to the love of her life as well.

In 1983, she met Jean Pierre Harrison, a flight instructor, and Aviation, expert. She not only got married to him but also learned to fly from him. Soon becoming a licensed pilot. Talk about the perfect man!

She further went on to pursue a Ph.D. from the University of Colorado, Boulder. She completed her Ph.D. 1988. Within the same year, she began working for NASA’s Ames Research Center. A stargazer since childhood, she was fascinated by space. And as such, applied and was selected to be a part of the 15th Batch of Astronauts for NASA. In 1955 she joined the Johnson Space Center and in 1996, was assigned to her first space mission.

Her first space trip was aboard the STS-87 as a mission specialist and prime robotic arm operator. This mission not only fulfilled her childhood dream of being among the stars, it also made her the first Indian origin woman to be in space; a feat which was imagined to be impossible.

Less than five years later, she was assigned to her second trip to space: on the fateful Columbia shuttle.

The 2003 Columbia trip turned out to be one of the worst disasters in NASA history. The spaceship suffered an accident wherein the insulation of the ship tore off a little while leaving the atmosphere. While the on-ground NASA staff knew that the crew onboard could not be saved in any case, they did not let the crew know this. While the spaceship descended on its way back, the insulation layer was completely ripped off and the ship became depressurized killing all 7 members of the crew. Including Kalpana. 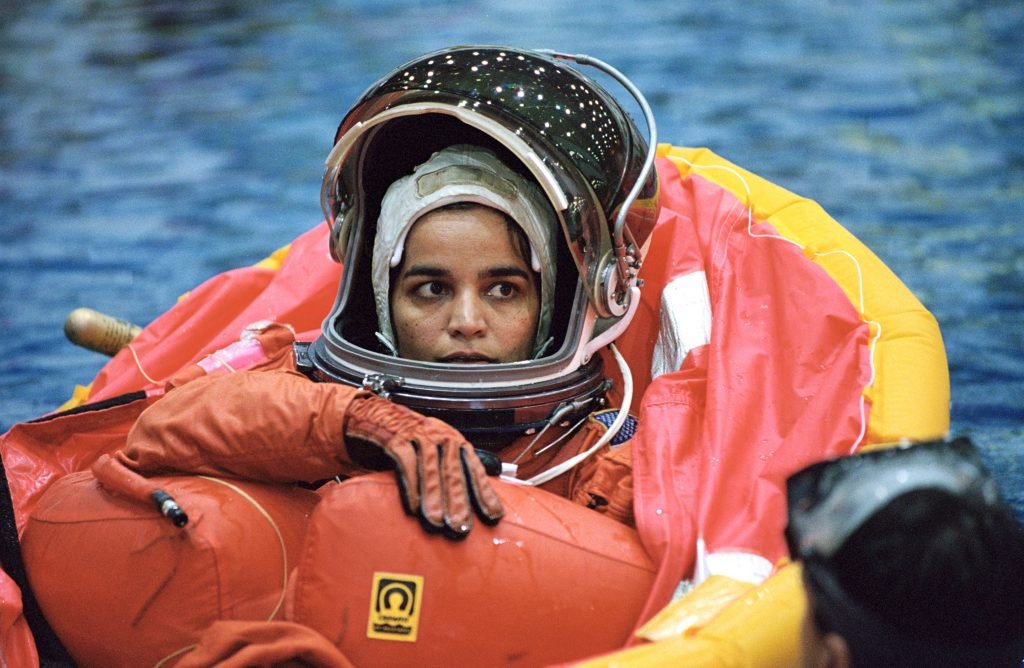 Anything I can say about this amazing, brilliant, smart and determined soul is less. While I have been inspired by her since my childhood, my respect for her keeps growing over time. Being a girl in an engineering degree, I can only imagine the amount of courage and self-confidence it must have taken for her to pursue her dreams. In a world that was much behind ours.

While her journey, now is viewed with awe and admiration, we can conceive how challenging and against-the-norms it must have been at her time. How her dreams must have been scoffed off as mere delusions. How her obsession with stars and her will to be educated must have been viewed as her crossing her social boundaries. Yet, she persevered.

Her strong character can be glimpsed through various interviews she gave as well as in the book her husband, Jean wrote after her death.

In one of her interviews in New York, she was quoted saying,

“I was not born for one corner. The whole world is my native land.” So said Seneca, the philosopher. I have felt that connection and stewardship for Earth for as long as I can remember. And not just for Earth, but the whole universe.”

A testament to her global perspective, her feeling of responsibility to not just her country, but the entire world.

Over the course of her education and career in America, she never forgot her roots. She kept up a constant correspondence with her alma mater in India, Punjab Engineering College. Every year, two students from her school, Tagore Bal Niketan were sent to visit NASA. A program conceptualized by her. The students even stayed with Kalpana herself, who apparently cooked and fed them Indian food on their trip!

How I wish I could have been one of those fortunate students who got to stay with this magnificent soul.

When asked to give a message to the Indian children, this is what she had to say,

“It is humbling to be asked. Material interests are not the only guiding light. It is something that you would enjoy doing in the long run. Take the time to figure out how to get there. The quickest way may not necessarily be the best. The journey matters as much as the goal. Listen to the sounds of nature. Wishing you the best on your trek towards your dreams. Take good care of our fragile planet.”

Kalpana epitomizes everything I aspire to be. Determined. Focused. Stubborn. Strong willed. A never-back-down attitude. A desire to create a dent in this monotonous life. A will to inspire more and more. Beauty in simplicity. A geek. And of course, an astronaut.

You are missed. And you will always have one of the highest, most revered place in my heart.