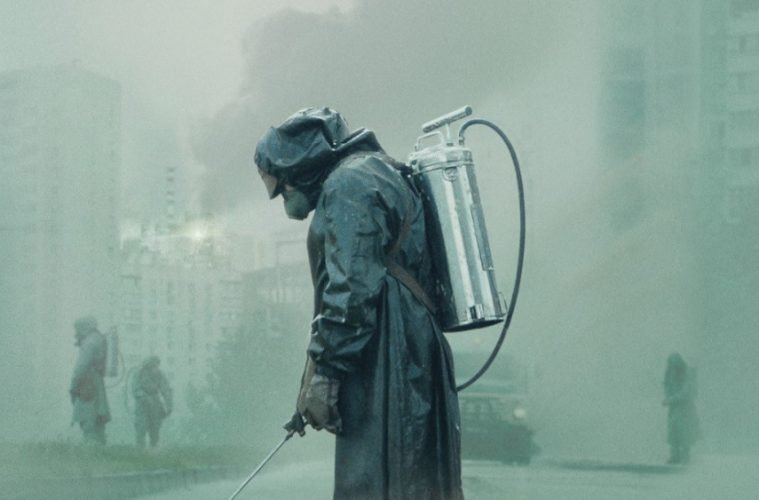 What is the cost of lies? It’s not that we’ll mistake them for the truth. The real danger is that if we hear enough lies, then we no longer recognize the truth at all.

A nuclear scientist, Legasov, records his accusatory memories in audio cassettes and proceeds to commit suicide. His memories bear testimony to the fact that the blame for the disaster at Chernobyl Nuclear Power Plant does not stop with Deputy Chief Engineer Anatoly Dyatlov (played by Paul Ritter). He reminisces that higher ups (read: “The Soviet Government”) were equally responsible; but, of course, they are away from the harm.

We jump precisely two years and one minute back in time to the wee hours of April 26, 1986; into the control room of the Chernobyl Nuclear Power Plant. Chaos rules as the team tries to maneuver a test in which they have already failed thrice. The power plant engineers will get promotions if the test succeeds. In their sincere efforts, they reduce the plant’s output. But then the unthinkable happens. As if taken over by a sense of vengeance, the plant’s reactor increases its output. The emergency shutdown switch worsens the scenario. An explosion devours the reactor core hurling radioactive debris in the air. The worst nuclear power plant disaster in history has just kicked off.

Sky Network’s coproduction, “Chernobyl” is an unforgettable masterpiece from director Johan Renck and writer Craig Mazin. It begins with the explosion at the power plant and drives us through the impact on the lives of people affected by it.

“Every atom of Uranium is like a bullet. It penetrates everything in its path: wood, metal, concrete, flesh.

By the end of the five-episode journey, “Chernobyl” penetrates our thoughts, emotions and soul. The haunting background music imitates the radiation-measuring meter. The crammed offices of 1980s Russia, the frequent mention of vodka and the suavely dressed bureaucrats together pack a neat punch in rendering the genuine aesthetics. 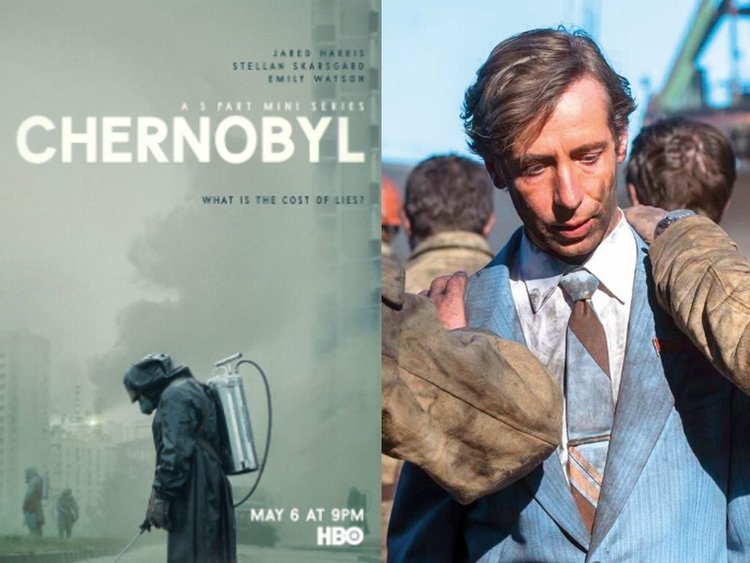 The Horror that Follows

Mazin, who has previously written comedies like the sequels of Scary Movie and Hangover movies, has transitioned seamlessly into writing a grim drama. Thus it is his magnificent writing that takes us step-by-step away from the site of explosion. The first sight of the reactor flame is shown from a firefighter’s house. How little happens in the dreamy village of Pripyat is evident from the people’s assembly at a bridge to witness the sight of the accident. It is one of the many soul-stirring sights of “Chernobyl” – children playing with the ash and elders joking around. Little do they know that they are all wrapped in a harmful radioactive blanket.

Our first tryst with the effect of the accident is at the plant itself. Through a journey of five hour-long tense episodes, the breadth of the wreckage’s scope expands on us. An engineer opens the reactor’s adamant door with his shoulder and witnesses his arm disintegrating. A fireman loses his hand simply because he picks up a gravel of graphite. Yet another firefighter’s young wife Lyudmyla Ignatenko (played by Jessie Buckley) goes through the struggle of keeping herself away from her rapidly-fading husband. (“Radiation rips the cellular structure apart”, explains Legasov.) The effects of radiation are felt far away in Sweden and Germany. Radioactive material threatens to seep through to ground water and from there to the sea, jeopardizing life on the entire continent. A particularly unsettling scene is when evacuators have to exterminate pets including a litter of newly born puppies.

Horrifying as they were, it would be a folly to consider “Chernobyl” as a mere portrait of the effects of a nuclear explosion on people’s health. A well-crafted lesson in the functioning of nuclear power plant is in the offering. “If you can’t understand how a stalled nuclear reactor could lead to an explosion, I don’t blame you,” says Legasov. His excellent matter-of-fact explanations enrich the watcher with a great deal of knowledge about RBMK reactors. Joining him from the scientific fraternity is Ulana Khomyuk (played astoundingly by Emily Watson). She goes through hospital rooms, gets arrested for her honest insolence and finally succeeds in finding the truth about the disaster.

The mass of the incumbent destruction dawns upon us. Each hour, the reactor radiates twice the amount of energy emitted by the bomb dropped at Hiroshima. Every damage control effort demands courage of the highest order. Even as robots and helicopters fail before the ravaging radiation, it is down to humans to walk into death’s mouth to clear the debris, pump out the water, and mine the tunnels. An animal exterminator summarizes all the efforts, “Our goal is the happiness of all mankind.” “Chernobyl” depicts the yearning for this goal of mankind’s distant happiness that inspires sacrifices from the commoners. 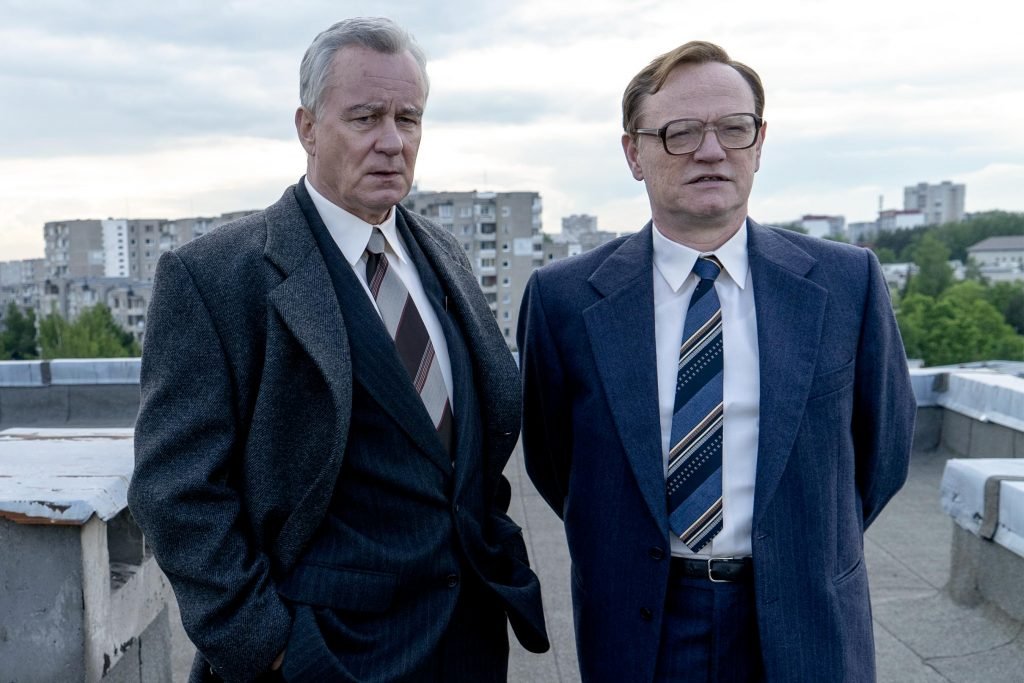 In the face of the notoriety of the harmful radiation, there is no room for further villainy. However, the invisible nature of the power plant’s spreading radiation is matched by the intangible ego of the Russian Government. Starting with Dyatlov in the control room. (“You didn’t see graphite because it’s not there!”) right up to the top-ranked Mikhail Gorbachev (played by David Dencik), we see every administrator denying that a planet-threatening catastrophe could happen in Russia. There are unbelievable refusals from the administrators throughout the series – the first one being the radiation level being equal to only the maximum level of a small meter.

It is heartening to see Boris Shcherbina (played by the award-winning acting veteran Stellan Skarsgård) undergo a tremendous change as we journey through the series. He starts with being an adamant and denying official. As he supervises the disaster operations from the plant’s proximity, we see him transform into a weary and patient listener staring lost at his own eventuality.

Against the backdrop of the appalling effects and heroic rescue missions, we reach a thrilling courtroom drama in the series finale aptly titled ‘Vichnaya Pamyat’ (‘Memory Eternal’). We are taken back to the events in the control room on the night of the explosion. Legasov’s accusation that the ruling Communist Party and the KGB were fully aware about the faulty designs of Chernobyl and sixteen other similar reactors find no takers. Lies prevail. None of the higher ups from the Government are punished. Legasov’s suicide and his audio-taped testimonies makes it imperative for the Government to make suitable changes to the other reactors.

Undoubtedly the series has infused drama for a screen adaptation. The debate about the Soviet Government’s involvement rages on even as Russia has announced a show depicting its own version of the disaster. Yet, “Chernobyl” offers a lesson that’s immensely relevant in today’s time. In his interviews, Mazin revealed that the frequent use of the phrase “cost of lies” reflects today’s world. Every day we read and ignore warnings about the rising global temperature, state-sponsored media stories and post-truth politics. A lesson that goes beyond the boundaries of a small town, of a country, of a continent – is never to ignore altered truths and to ask the right questions.

“Chernobyl” concludes with Legasov’s brilliant take on truth and lies – “Every lie we tell incurs a debt to the truth. Sooner or later, that debt is paid.” It is this broad lesson that makes “Chernobyl” a show that is not to be missed. Watch it, for this one is surely going to make it to the textbooks. And deservingly so!

“Chernobyl” is available in India on Hotstar.