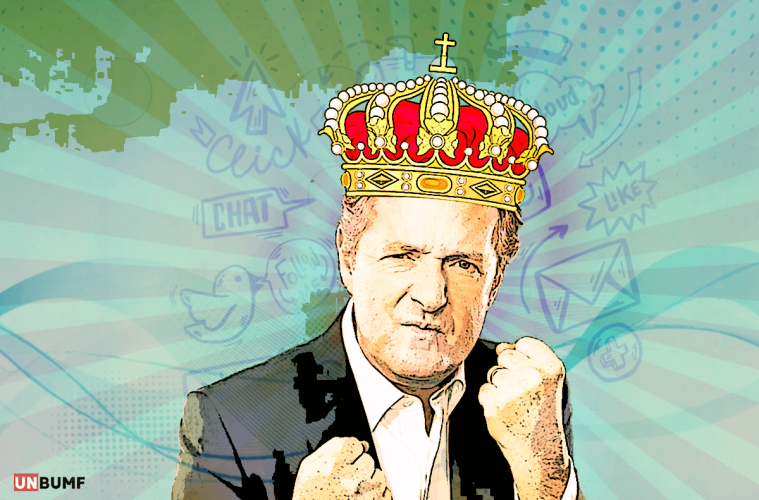 5 Reasons Why Piers Morgan Is The King Of Controversy

There has been an alarming increase in the global pandemic of ‘foot-in-mouth’ syndrome. One supposed ‘superpower’ elected a victim of this disease as their President. Our country has a few of our own in the Gandhi scion, a significant half of the Congress, Sanghis, liberals and so many more. Piers Morgan is one elite member of this global fraternity. As an outspoken and aggressive TV personality, he has found his tongue wagging a little too much at times. And when it doesn’t, his fingers do the honors via his Twitter account.

Piers Morgan is constantly at the receiving end from Twitteratis. He has been most consistent in picking fights with footballers in the UK and celebrities. He has also claimed fame in news in India for having being schooled on Twitter by our own cricketer-turned-comedian Virender Sehwag.

Who the fuck is Piers Morgan?

Piers Morgan is a British journalist and TV personality. He became the youngest editor of a British national newspaper in over 50 years when Rupert Murdoch made him the editor of News of the World. Morgan has spent time as an editor at quite a few tabloid newspapers of prominence including The Sun and The Daily Mirror. He is currently a presenter on the morning TV show Good Morning Britain, which acts as the platform for his outrage against the celebrities, besides twitter of course. 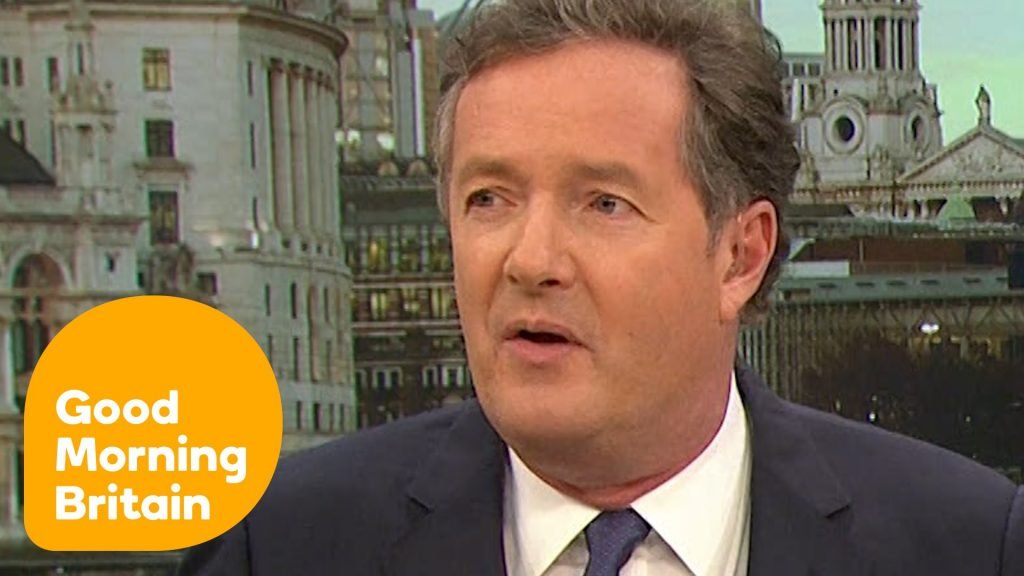 Morgan has also been a judge on Britain’s Got Talent and America’s Got Talent. He won the Celebrity Apprentice in its seventh season. He’s also claimed to be friends with the US President the Donald which pretty much explain his twitter outrages.

Let’s look at a few controversial instances where Morgan went to feud with some celebrities and got slammed for it in return: 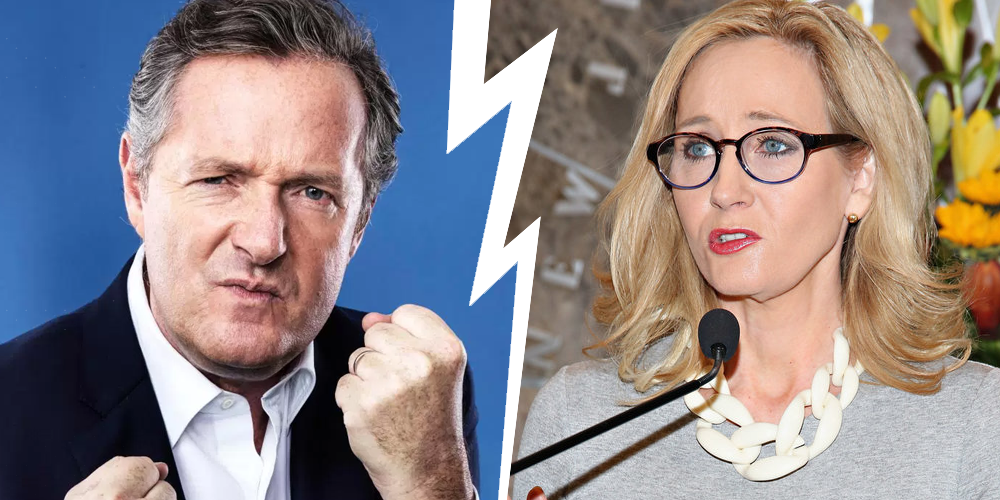 And expectedly, fans shredded Morgan over his unwarranted criticism. JK Rowling is one of the most loved writers of our lifetime. She encouraged young children to take up literature. And an entire generation grew up reading and watching Harry Potter.

Piers Morgan has had a long-standing Twitter feud with Rowling. JK Rowling even tweeted her satisfaction when Australian comedian Jim Jefferies told Morgan to fuck off on Real Time with Bill Maher.

Yes, watching Piers Morgan being told to fuck off on live TV is *exactly* as satisfying as I'd always imagined. https://t.co/4FII8sYmIt 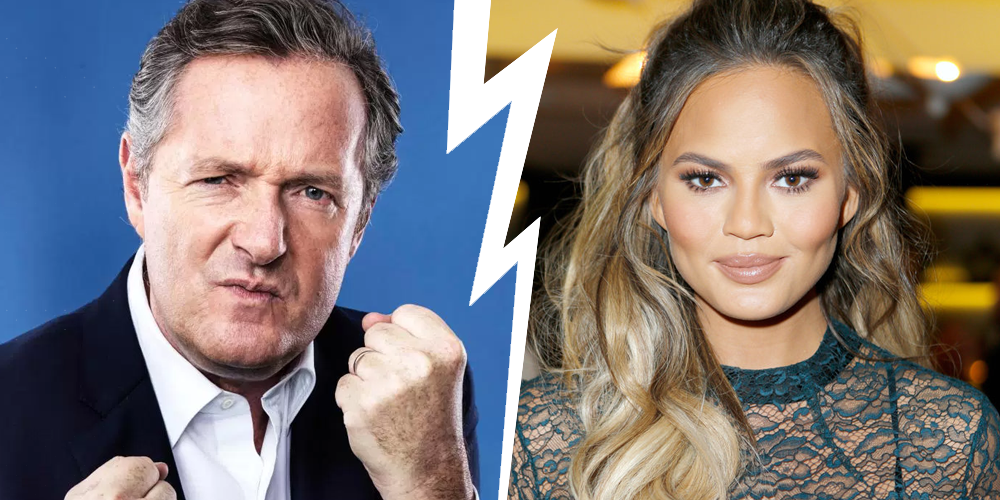 With Chrissy, Morgan stepped on a landmine. It all started when Morgan tried to glorify his ‘friend’ Donald Trump just after Muhammad Ali’s demise. He mentioned that Ali said more racist things in his life than Trump about Muslims. Teigen and her husband teamed up to tweet back an apt response.

Then again, Morgan went on a personal attack on Jennifer Aniston as to how she should not speak on the topic of objectification of women when she herself poses for airbrushed portraits on magazine covers. In Aniston’s defense, Teigen called out Morgan’s vile column calling him a ‘misogynistic, condescending moron’ on her husband’s behalf, apparently.

my husband thinks you are one of the most misogynistic, condescending morons on the planet but thank you. 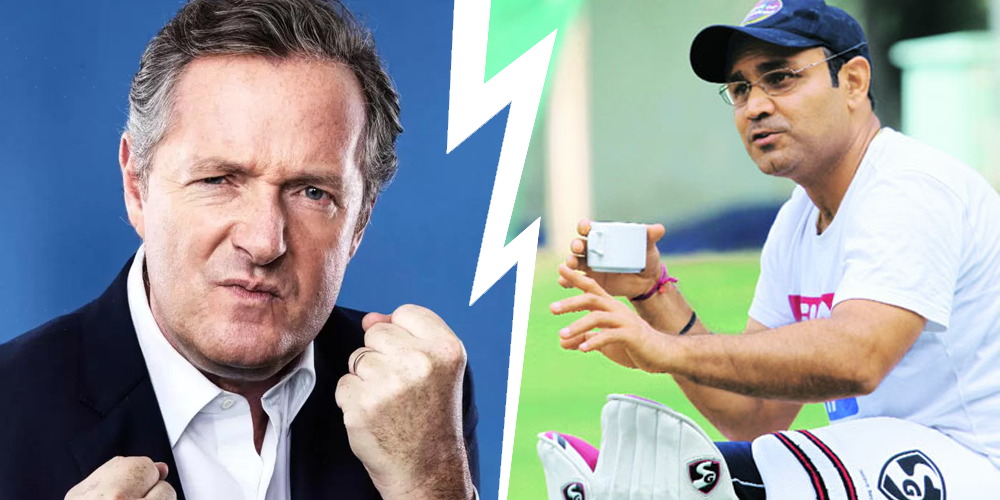 Piers Morgan has had a bittersweet twitter friendship with Virender Sehwag. Recently he took on the role of a grammar nazi, spell-checking Sehwag’s tweets on India thrashing England in kabaddi. Twitterati went nuclear on Morgan, although Sehwag himself didn’t give Morgan the satisfaction of a reply.

But Sehwag too did not keep quiet. His sub-tweet stabbed Morgan too badly.

This is not the first time Morgan tried to banter with Sehwag. Earlier this year after Indian women lost in the cricket world cup, Morgan tried trolling Sehwag. When Morgan commented on India’s Olympic medal tally, Sehwag had replied that we cherish every small and big happiness. Morgan even went on to bet 1 million dollars to charity if India won an Olympic medal before England’s soccer world cup win. 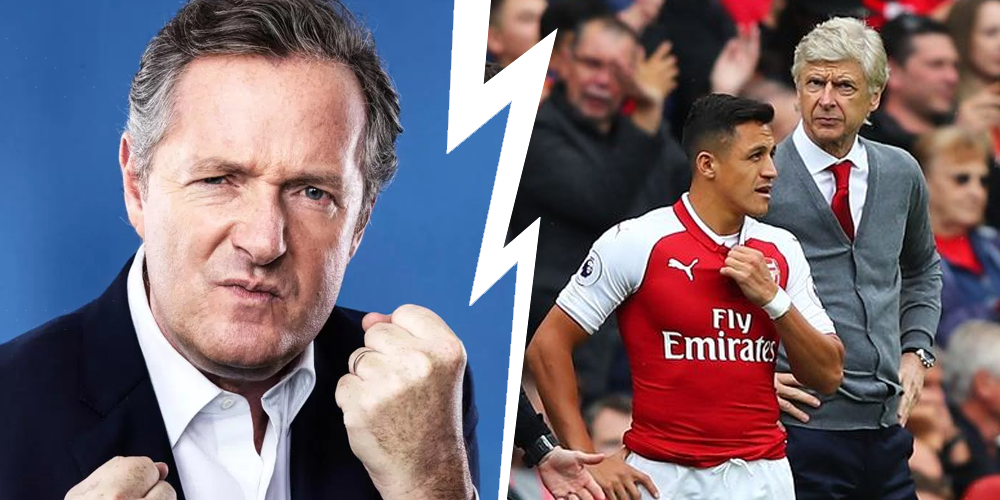 Piers Morgan is an ardent Arsenal supporter, or he claims to be one. This should be an added disappointment to Arsenal FC, besides their performance of course. He articulates his meltdowns on twitter after every disappointing show and Arsenal seems to be giving him plenty of reasons too.

Oh shut up, Wenger.
I've loved this club for 26 years longer than you, as have many fans.
You've failed for 13yrs, it's over. https://t.co/k5HGIjvwKU

After a long while, he promised to never tweet about Wenger again. Let’s see how he holds up on that one. 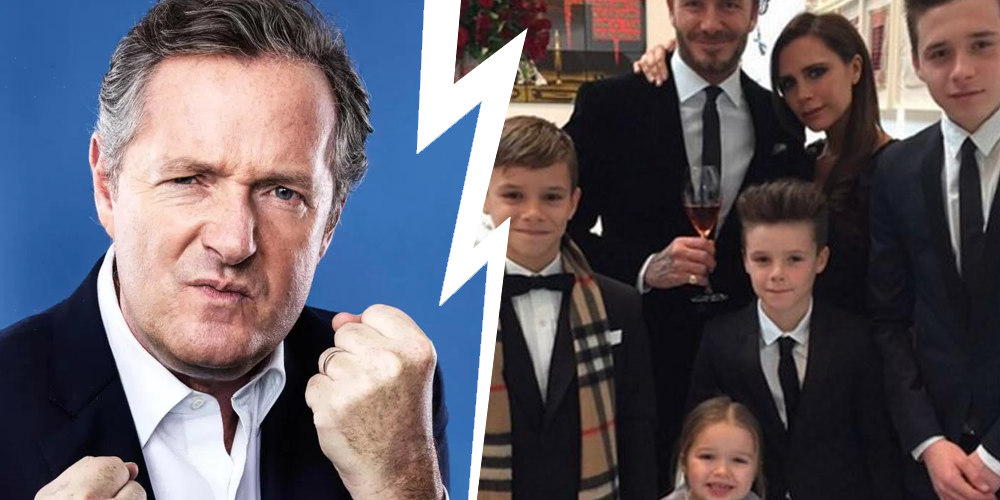 Morgan’s love for Arsenal and hate for Wenger is well-known. A glimpse we got a little while earlier. When David Beckham lent his support for the under-fire Arsenal manager, terming the fans who were out for his head as ‘disgraceful’, Morgan went ballistic with a barrage of tweets aimed at Beckham. He told Beckham to ‘shut it’ following his support.

Still fuming at David Beckham attacking Arsenal fans.
Who the hell does the jumped-up tattooed twerp think he is?

When Beckham’s cameo in King Arthur dropped in May earlier this year, he found himself at the receiving end for his unflattering acting skills. Leading the mocking was once again, Piers Morgan who sarcastically commended Beckham for his ‘oscar worthy performance’.

Turning his attention to the rest of the Beckham clan, Morgan slammed a video of Harper Beckham singing Happy Birthday to her mum Victoria. He came after the family again when Cruz Beckham launched his debut single. He criticized Beckham calling him as more concerned about ‘Brand Beckham’ than his own children. For this, Morgan earned quite a backlash for questioning Beckham’s parenting style.

Although, being candid and forthright with your opinion is a welcome quality, it doesn’t help if your words spew hate, vengeance and, in most cases, utter idiocy.

Morgan, being a popular TV personality with platforms like Twitter and TV at his disposal,  he is able to broadcast his stupidity to a wider audience. As Will Smith mentioned to school his avant-garde son Jaden, “Back in my days, I had no Facebook, no Twitter. So I was stupid, but I was stupid in private”.

With more than 6 million followers on Twitter, Morgan has a platform on which his words are more powerful than most. The follower count should count as a responsibility. Until he learns this on his own, Twitterati will continue their favorite pastime of trolling the troll-worthy, Morgan being one of the most eligible.