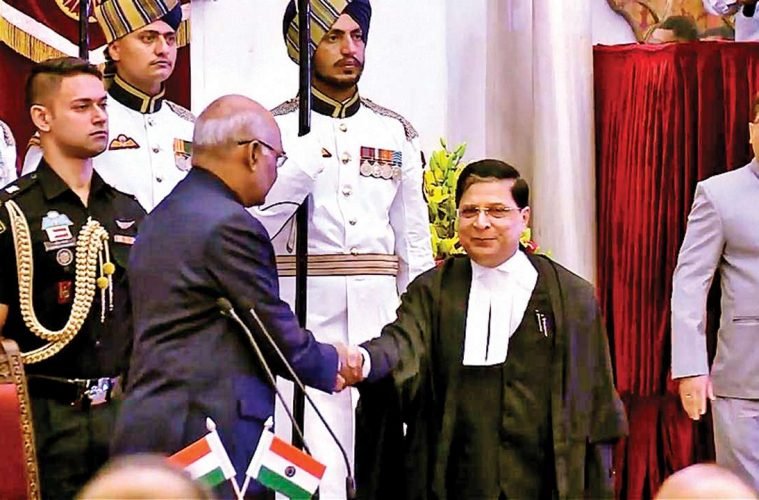 Our 71 year old Indian democracy thrives on three Constitutional pillars – Judiciary, Legislature and Executive. Although, expressly none of the three are superior than the other two, the supremacy of the judiciary has always been implied. That is because the judiciary is the ultimate and the most approachable body in a democracy. Moreover, there runs a faith in the masses that even when no authority is ready to listen, the judiciary is the last and final recourse for justice.

Judiciary accolades a special status to no one and treats everyone alike. And thus even the former PM Indira Gandhi’s election came under judicial scrutiny. This and many other such episodes reinstate our trust in the judiciary. But sadly, today this faith is been attempted to be shaken to the core by attacking the independence of judiciary and by raising doubts about the credibility of the judicial institutions.

The Impeachment Motion moved by the Indian National Congress President Rahul Gandhi in consonance with 71 opposition MPs of the Rajya Sabha heralds a revival of the classic trait of the Nehru-Gandhi family. The trait of putting personal interests before the interests of the nation. And to stay in power by fair means or foul. It is Congress party’s tried and tested stunt to undermine the judiciary to stay in power. While Ms. Indira Gandhi took refuge of Article 352, Imposition of Emergency, her grandson now has taken the advice to take asylum of Article 124 (4) to save himself and his party from drowning and be completely impeached from the country.

Moving for impeachment of the Chief Justice of India, the head of the most important pillar of the democracy is even bigger move of audaciousness than imposing emergency. This is because while the ramifications of the latter effected the basic corporal freedoms of the citizens, the former move strikes a dagger right into the belief in the judicial integrity. It also raises doubts on a system which avows to uphold the Rule of Law in the State.

Constituent Assembly Debates (CAD) make the intent of the makers of the Constitution clear that independence of the judiciary is of paramount importance. To safeguard the dignity of the institution, the interests have to be accommodated. A balance between governmental oversight and judicial autonomy in administration. And therefore the Doctrine of Separation of Powers is vital.

The brevity of the first debate which laid the foundation for future discussions led to considerable disappointment as articulated by a member of the drafting committee, Sir N. Gopalaswami Ayyangar. The route for impeachment of a judge of the higher judiciary is difficult because the sanctity of the judicial offices had to be protected from such whimsical actions like the one we are witnessing today. Political parties do engage in a duel on the streets and in the Parliament. However, today Congress is attempting to engage the two pillars of democracy in a combat. And it is only the people of India who will be vanquished.

Congress party’s crutch behind this move is the Justice Loya Verdict. 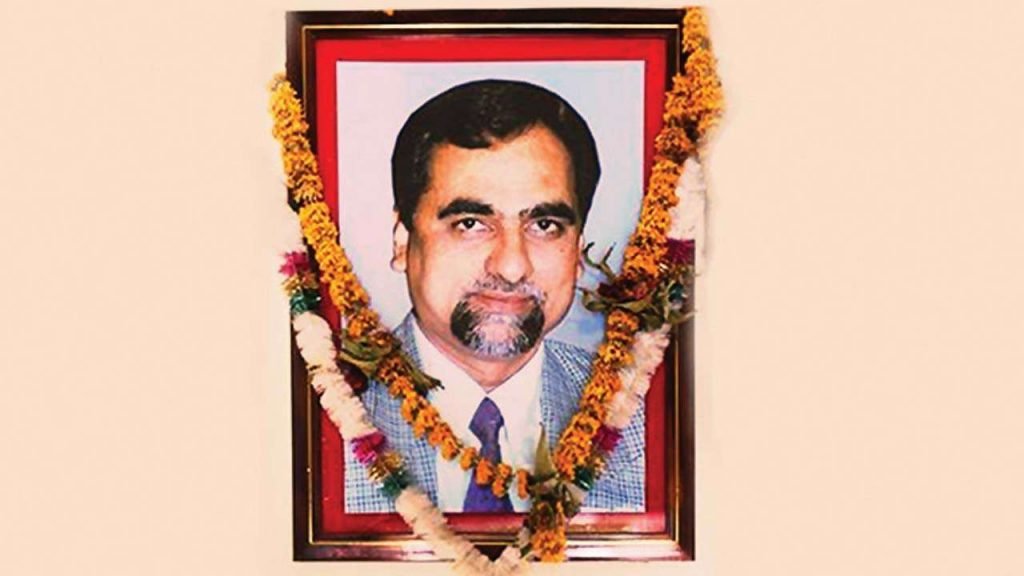 Also, the press conference held by the 4 sitting judges of the SC. While the party spokespersons are reiterating that the impeachment motion is not a political move; their President Rahul Gandhi himself on the day of the motion being moved before the Vice-President, tweets the following:

“There is no hope left, everything is managed” say Judge Loya’s family.

I want to tell them, there is hope. There is hope because millions of Indians can see the truth.

India will not allow Judge Loya to be forgotten.https://t.co/qSczy4kmZr

Thus by this move Congress is only indicating that if the verdict is not as per our demands, we will start questioning the very establishment of the judiciary. Also, the 4 judges who held press conference did not purport that the solution to the problem they had tabled was impeachment of CJI. In fact, Justice Chelameshwar himself was recorded saying at a public interaction that impeachment was not a solution.

2019 is a distant dream for the Congress party. Moreover, the party leaders realize that and thus the frantic party leaders are ready to leave no stone unturned in a bid to come into power. Therefore, when a detailed speaking judgment is passed in the said PIL which is not in the favour of the party’s political agenda, then impeachment is used as a weapon. A weapon intimidate a Judge and send a message to other Judges, that if you don’t agree with us, fifty MP’s are enough for a revenge action.

Evidently, the Congress party is using the process of impeachment just as a symbolic tool to garner public sympathy. Because each one of the 71 MPs know that their motion of impeachment will not see any light at the end of the tunnel. Therefore, such efforts are directed only at gathering public support by building an atmosphere of hostility against the judiciary. Thereby staining the very fabric of our democracy. 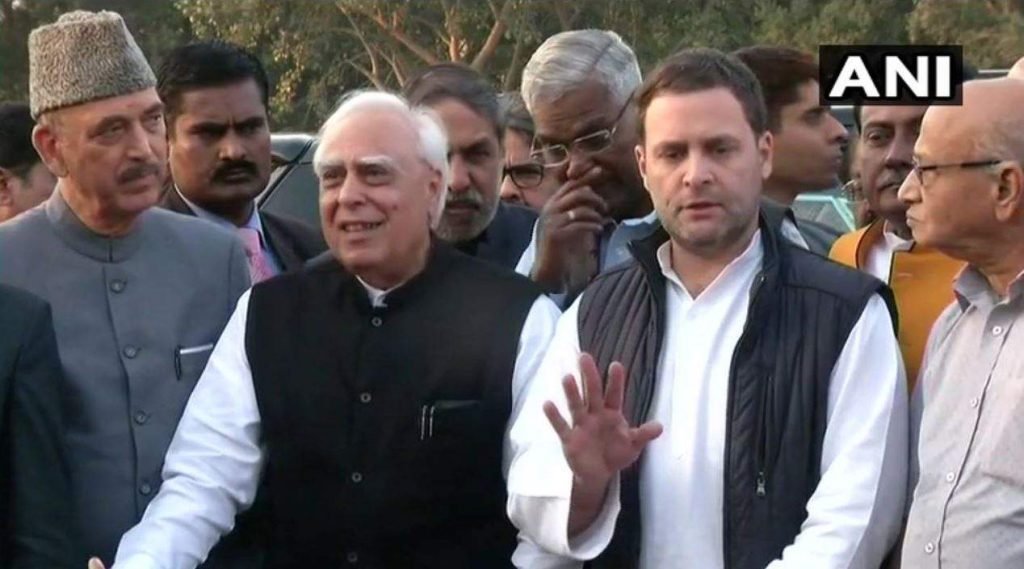 The 5 charges leveled against the CJI in the motion which include, “abuse of power” as the master of roster. The Prasad Educational Trust case . And the CJI having acquired a land when he was practicing as an Advocate. None of the mentioned constitutes “proven misconduct” or “incapacity”. The sole two grounds on which a SC judge can be impeached.

The impeachment, which has a cradle to grave approach is understandably a political gimmick. This is because the Congress party leaders forgot as to where they have to tow the line. And thus important senior leaders of the party including Dr. Manmohan Singh, P. Chidambaram, Abhishek Manu Singhvi, Veerappa Moily and also Salman Khurshid are against the motion.

Let’s have a look what the twitter had to say about this:

Would not like to get into the merits of the controversy,I am on a larger principle & the larger principle is that impeachment is the extreme remedy & that to against the chief justice, which is an unprecedented move.This move could have been avoided: Ashwani Kumar, Congress pic.twitter.com/dWlDIeydC9

If I would have been a member of parliament and had i been given this paper to sign, I would not have signed the impeachment motion: Ashwani Kumar, Congress on Impeachment notice against Chief Justice of India. pic.twitter.com/Tgo3v9pQUr

Judiciary is Indeed in Danger

There is subtle but very important problem in this whole situation. The judiciary is slowly becoming a toy in the hands of political parties and the Parliament. The custodian institution of the Constitution and Rule of Law is dragged in the frivolous political circus. Itss independence is at peril. This incident today is perhaps the darkest day in the history of Indian judiciary. Parliament is misusing its power over the judiciary to undermine it.

Impeachment is a process by which you remove the holder of office. This is done in order to protect the dignity of an office.

The power of impeachment under our Constitution is a part of an inter-institutional accountability. Both Houses of Parliament as political houses have been conferred the judicial power of impeachment. Thus a judicial power is exercised by a political house. Each Member has to act as a Judge. He has to independently review the facts and the evidence. Decisions cannot be on party lines or dictated by whip. Thus, this is a very delicate right over the judiciary which has been given to the Parliament and utmost care must be taken to refrain from misusing it.

Impeachment shall not be devised as an instrument to pressurize the judges when the result of a case is not to ones liking. The judges ought to have an independent and neutral perspective. Moreover, under no circumstances shall these traits be jeopardized. Imagine a state where if one section of the people is not happy with a verdict. It moves on to pressurize the judiciary by holding violent protests. The judiciary succumbs to the pressures and recalls its verdict. Then the other group rises in rebellion and the vicious circle never ends!

Thus it is fundamental that we as a nation understand the fact that the judiciary is not a body which will appease the people. It is a body which will propel only righteousness in the society because the judges are not so called representatives of the people. They are the guardians of democracy of the Republic of India.