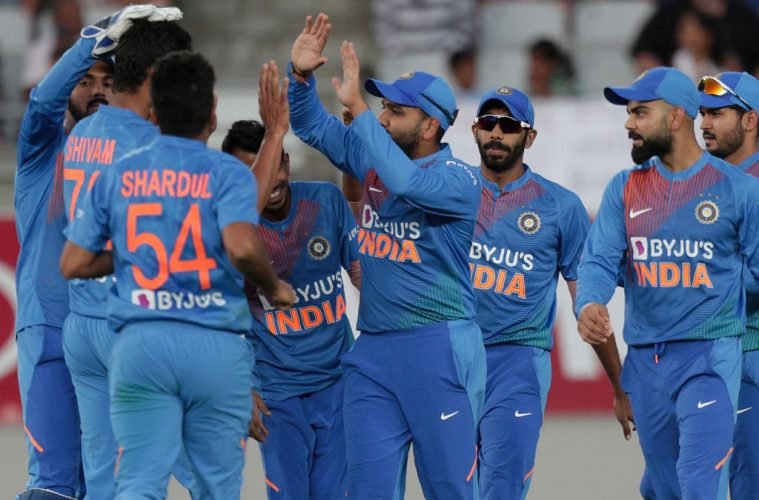 India registered an amazing victory in the first T20 international, against New Zealand to start-off their tour on an amazing note. A total of 407 runs scored in 39 overs. While it was hell for the bowlers out there, the batsmen had a field day with with five batsmen registering half-centuries and 20 sixes being hit. At the end of the day, it was the Men in Blue who had the last laugh as they registered their highest successful run chase overseas. 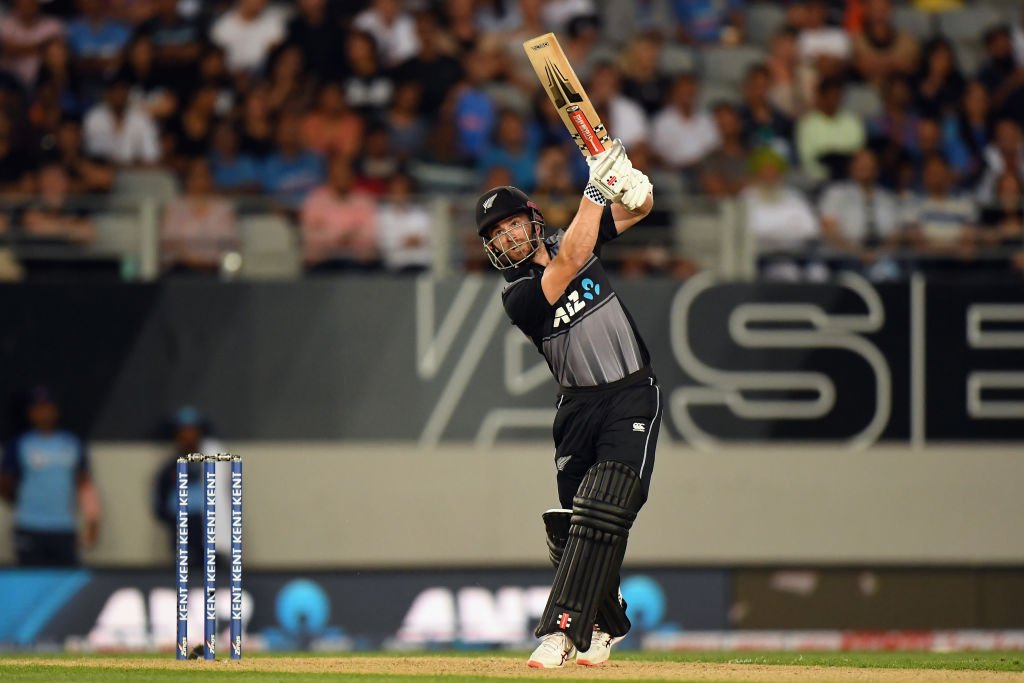 The Black Caps were off to a fascinating start as openers Martin Guptill and Colin Munro went after the Indian pacers. Shardul Thakur was taken for the cleaners as he conceded 30 runs in the couple of overs he bowled during the power-play. Mohammad Shami was also not spared as he went for 22 in his first two. If anyone showed proper control, it was India’s prime pacer Jasprit Bumrah who constantly bowled troubling lengths for the Kiwi batsmen.

Shivam Dube got India their first breakthrough in the form of Martin Guptill as Rohit Sharma pulled off a spectacular catch at deep square leg boundary. On the other hand, Colin Munro went on to score 59 runs from just 42 balls as he tried to go big against Shardul Thakur who was being hammered by the skipper on the other end. He was soon followed by Colin de Grandhomme ay the dug out who was dismissed for a duck as India tried to break their momentum.

india have a bone to pick with martin guptill #youremember #NZvsIND 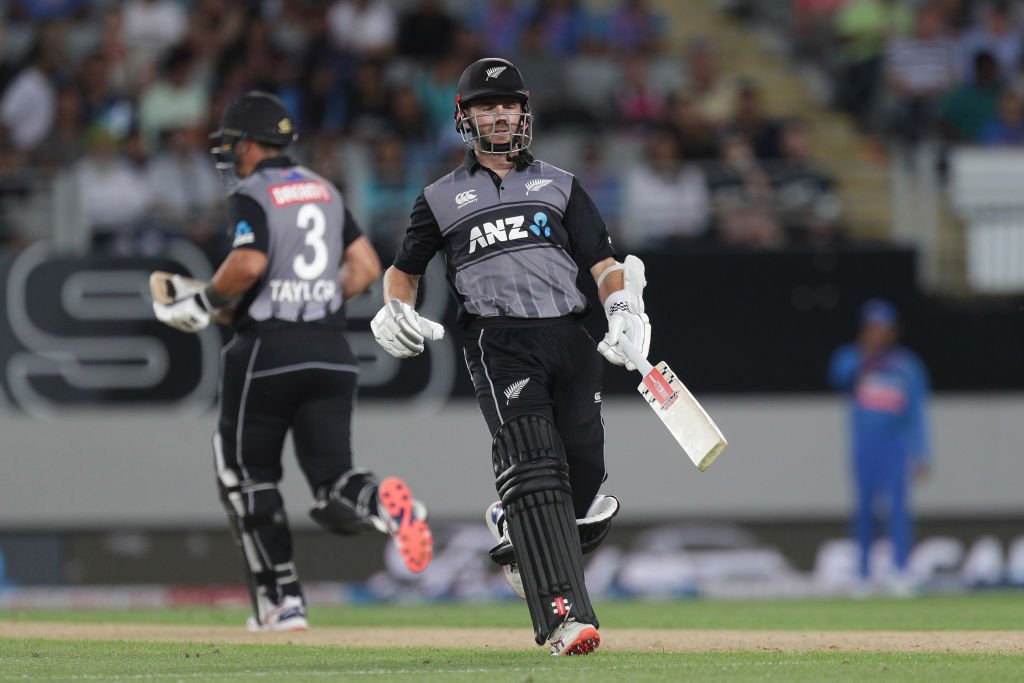 Captain Kane Williamson was in some pinch hitting mood as he arrived at the crease. He first deposited Shivam Dube to the stands before going off against Shardul with consecutive sixes. Ross Taylor who began patiently, got into the groove as he hit Jadeja for a boundary and a maximum. In the next over, he unleashed himself against Shami, hitting him for a boundary at deep mid-wicket followed by two consecutive sixes.

Meanwhile, Williamson hit three boundaries off Yuzvendra Chahal to reach his fifty before getting out to him on the last ball. With the Kiwi total 178/4 at the end of 17th over, Bumrah bowled exceptionally well in the death overs. There was an injury scare as well in the last over as the right-arm pacer seemed to have twisted his ankle. The whole country skipped a heartbeat before Bumrah continued his over after some assistance. The hosts put up a good total of 203/5 in their quota of 20 overs.

So many fours and sixes but the spell that made the difference was again by @Jaspritbumrah93. Difference between chasing 204 and 220.

KL Rahul and Virat Kohli get India to a healthy start

Chasing 204 for victory, India lost Rohit Sharma early as he tried to go after Mitchell Santner but ended up finding Taylor at backward point. It was an unneeded shot, especially after having slammed the bowler for a maximum on the previous ball. On the other hand, KL Rahul continued his sensational form in T20 internationals as he raced towards another half century with a maximum off Blair Tickner. His last seven scores in the format are 56, 54, 45, 91, 11, 62 and 52.

Virat Kohli who came in early looked in sublime touch as well. He alongside Rahul combined for a partnership of 99 runs from just 50 balls to keep India ahead of the required rate. Both kept hitting boundaries at regular intervals and the running between wickets made sure that the Kiwi fielders were on check. While Rahul got out trying to slog against Ish Sodhi, Kohli got out in what was a spectacular catch by Guptill. With the quick dismissals, NZ crawled back into the game.

KL Rahul = Wherever you want#NZvsInd

Shreyas Iyer to the rescue 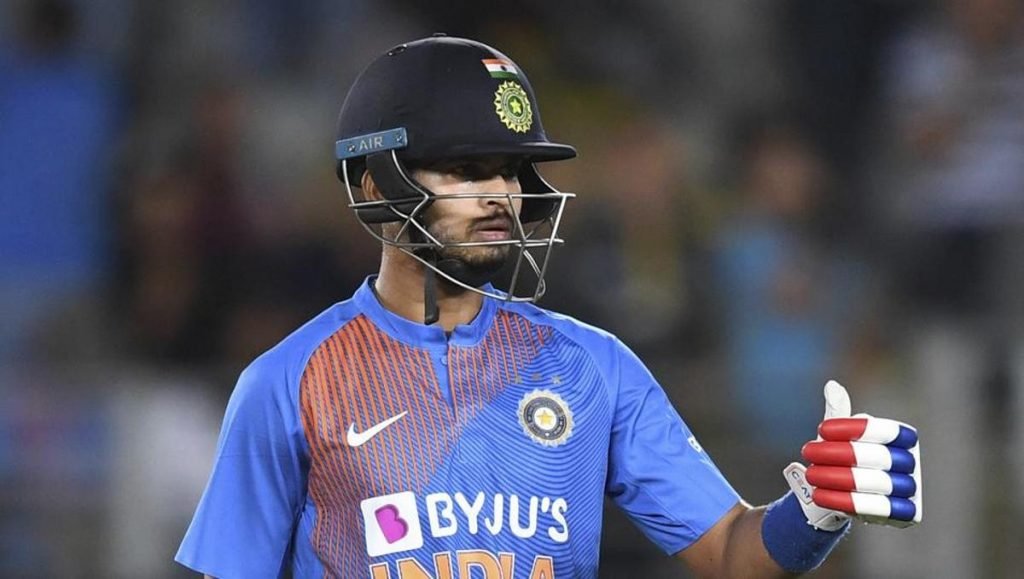 Two new batsmen at the crease in the form of Shreyas Iyer and Shivam Dube and an asking rate above 9. It was never going to be an easy task. Dube inspired some confidence as he launched himself against Santner. However, he was soon dismissed by Ish Sodhi who conceded just two runs in the 14th over. Another good over by Hamish Bennett saw the required rate climb to above 10. That’s when Iyer unleashed himself.

While Pandey was keen to give the strike to the aggressor, Shreyas left no stone unturned in what was a magnificent display of hitting. Whether it was Bennett or Southee, he didn’t mind going bonkers against them. The equation went down to 18 runs from the last two overs. Southee who bowled the penultimate over was taken to the cleaners by Iyer who ended the game there itself. His stupendous knock of 58 runs not out from just 29 balls also won him the Man of the match.

While India won the game, the bowling wasn’t at par as the visitors bowled many loose deliveries. They will be looking forward to introspect on the same as both teams play another T20 international at the same ground on India’s Republic Day.

Find our other articles on cricket, here.