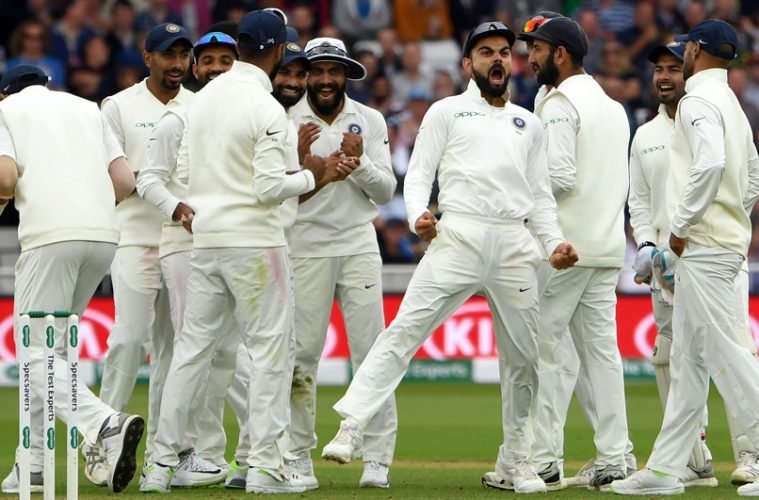 Hurt, Broken and Dismantled at the Home Of Cricket, India arrived at Trent Bridge. A venue where they have sweet memories from the tour of 2007. Milestones are created to be broken, history is created so that it can be repeated. If the comeback at Johannesburg after being two down in the series was stupendous, then the victory at Trent Bridge is even more remarkable. A comprehensive 203 run win after facing an innings defeat at Lord’s was quite illustrious.

A much improved Indian team

For a change, Shikhar Dhawan and KL Rahul began well as Joe Root chose to bowl first. Chris Woakes struck in consecutive overs to send both the openers back to the pavilion. Pujara who batted with a lot of grit grew impatient. The 30 year old tried to go for the pull shot and ended up finding the fielder just before lunch. Virat Kohli and Ajinkya Rahane were assigned a task to lift up the team from 82/3.
What followed next was a fantastic 159 run partnership between the skipper and his deputy. While Rahane registered his first half century in 15 innings, Kohli continued to display his valor. He fell three runs short of a well deserved century. India crossed the 300 run mark owing to contributions from the lower order including that from debutant Pant. Eventually, Jimmy Anderson and Stuart Broad had the tailenders in a flash.

From getting outplayed at Lord’s to dominating at Trent Bridge

The second session yet again belonged to India. The events that transgressed were quite extraordinary from the visitors’ point of view. Alastair Cook and Keaton Jennings departed after a good start. Ollie Pope failed to do anything special. Joe Root got out cheaply. KL Rahul put up a sensational display at slip with a couple of sharp catches. The Englishmen were in a spot of bother at 108/5 as Shami got the better of Ben Stokes.
Hardik Pandya has been at the receiving end of the critics for a long time now. However, the crowd witnessed the resurgence of the all rounder at Nottingham. After having accounted for Root on his first ball, Pandya had both Bairstow and Woakes within an over. He was swinging the ball, hurling the short ones and trying all types of variations to juggle the batsmen. He came back in the next over to get rid of Rashid and Broad. In the process, recording his first ever five wicket haul. 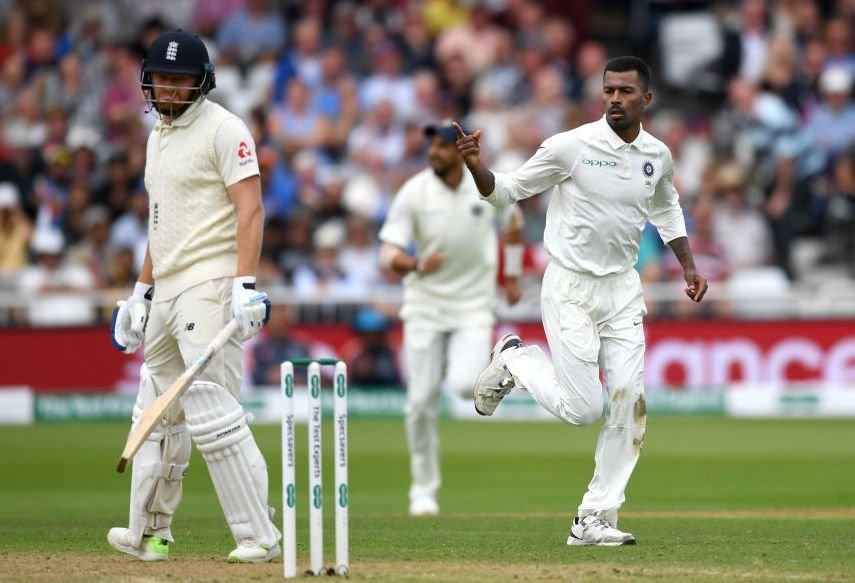 Source
The Indian crowd went berserk. The hosts were reeling at 128/9. Still running a risk for a follow on. That bad a situation for the Poms who were 54/0 at one stage. Jos Buttler’s antics in the end helped England crawl to a total of 161 runs. With a lead of 168 runs, India walked out to bat. The opening pair again provided India with a decent start. Dhawan came close to posting his first ever half century in England. Instead a harakiri against Adil Rashid led to his stumping dismissal.
If it was Rahane’s turn to prove his mettle in the first innings, it was Pujara rising in the next. Both him and Kohli put up a century stand. Unlike the earlier innings, the Indian skipper went on to register his 23rd century, his second in the series. His overall tally in the current series stands at 440 runs while the next best Bairstow is at 206 runs. The defeaning gulf between him and the rest is absolutely astounding.

However, it wasn’t over for England yet. The exceptional spell of bowling probably didn’t provide enough justice to Pandya’s versatility. The youngster stepped up with a run a ball fifty as India set a mammoth target of 521 for England to achieve. The top order was again back in a jiffy as the hosts were reduced to 62/4. England were staring at a huge defeat with the trail in excess of 450 runs.
Jos Buttler and Ben Stokes had other plans though. Both stitched a 169 run partnership for the fifth wicket spanning more than 50 overs. As the rest of the English batting faltered, the duo portrayed tremendous character in staying at the crease. Jasprit Bumrah, the comeback man put an end to the batting exhibition by Buttler. Bairstow got outdone on the very next ball as India swung back into the game. 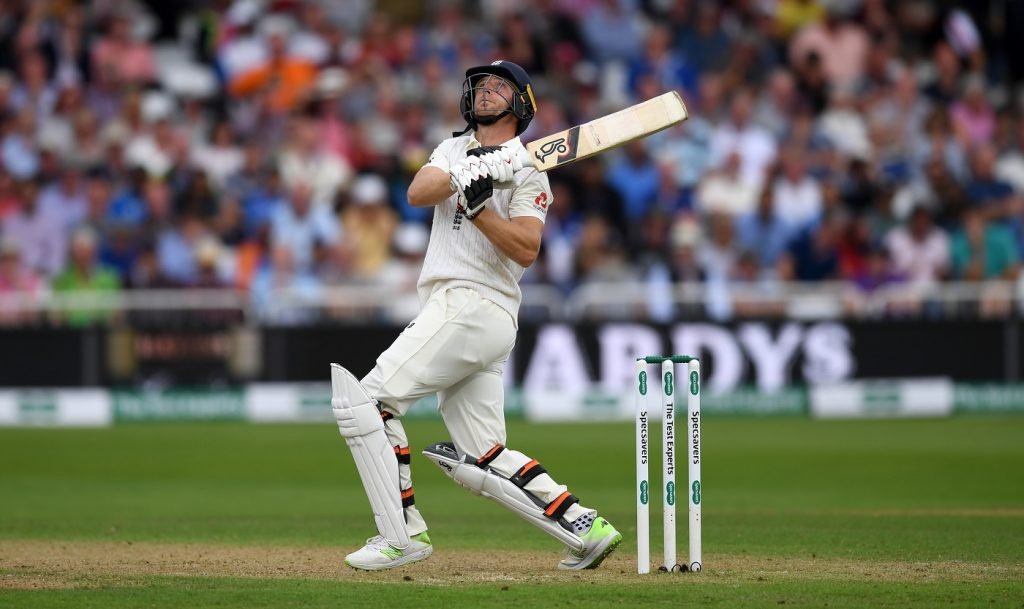 Source
The next couple of overs witnessed two more wickets. Jasprit Bumrah managed to pick up his second consecutive five wicket haul. Both resulting in overseas wins for India. The tail did wag for a fair bit but it only required 3 overs in the final day to bundle England for 317. England did fightback but it wasn’t just enough. As for India, they had scripted a marvelous victory.

Can India produce a twist in the tale

With no hopes of a revival after the setback at Lord’s, the Indian team did the unthinkable. While Kohli continued to lead from the front, the difference was created by the other teammates chipping in. The likes of Pujara, Rahane dwelling in with the bat. Pandya with a spectacular all round show and Bumrah with the ball. Altogether, the team showcased their potential and yearned to improve themselves from their previous failures.
Nothing seems more captivating than a comeback in the middle of a series. Not only have the visitors made the series alive but they also stand a chance to level it at Southampton. To put a mauling at Lord’s behind themselves required staunch resilience. This Indian team has already proved the world what it is capable of. However, the question that now lies is whether they can create a turnaround.
Featured Image Source