795 runs. Two centuries. Four Fifties. It was a run-fest at Seddon Park, Hamilton as the Kiwis registered a successful run-chase of 348. The Men in Blue batted well as they put up 347 runs on the board but with the ground being a difficult one for the bowlers with short boundaries, India found it tough to defend. Earlier it was stand-in skipper Tom Latham who won the toss as New Zealand put India to bat first. The match saw Prithvi Shaw, Mayank Agarwal and Tom Blundell making their debuts. For a change, there was no Rohit Sharma and Shikhar Dhawan walking out to bat. Indeed it was the pair of Prithvi Shaw and Mayank Agarwal who walked out to bat in the middle were off to a good start. Both the debutants added 50 runs for the opening stand before departing in a space of five balls. First, Shaw was dismissed for 20 as Colin de Grandhomme found an outside edge. Then, Agarwal found debutant Tom Blundell at point as he also failed to convert his start.

Virat Kohli who walked in at No.3 was looking comfortable batting alongside Shreyas Iyer. Together, both put up a 102-run partnership for the third wicket. The Indian skipper also went on to score a half-century before getting outdone by a googly from Ish Sodhi who struck in his first over. While he couldn’t get a big score, Kohli ended up registering his 101st score above 50 in One Day Internationals.

Bit strange not seeing either Rohit or Shikhar walking out in an ODI. But then, excited too about seeing Prithvi Shaw and Mayank Agarwal. So many options for India now

Shaw and Mayank started their ODI career today and it was descent start as debutant.

But they have to show what they are capable of. Lot of expectations from these two in next 2 matches.
Both have ridiculous talent and should deliver.
This is great opportunity for them.#NZvIND

Iyer and Rahul take the Men in Blue close to 350 Iyer who began slowly started to accelerate as both him and KL Rahul started going after the New Zealand bowlers. Both put up a partnership of 136 runs from just 101 balls as they batted significantly well. Iyer went on to register his first ever ODI century after having scored six fifties in the format. He was dismissed by Tim Southee who bowled a slower delivery as Iyer ended up finding Mitchell Santner who took a regulation catch.

On the other hand, KL Rahul was off to another quickfire start as he started exploding with the bat. First he deposited Ish Sodhi into the stands before repeating the same against Tim Southee. The wicketkeeper-batsman raced to an unbeaten 88 runs from just 64 balls. Kedar Jadhav who walked in to bat in the death overs put up a sincere effort of 26* (15) as India posted a mammoth total of 347/4 on the board.

If I had to label Rahul's batting right now, it would be somewhere between Kohli & ABD✨#KLRahul

Gets his maiden international hundred, as Kohli claps proudly from the dug out.#NZvIND #NZvsIND #INDvsNZ pic.twitter.com/hBfUmIZRQE The Indian bowlers began well even though they failed to get a wicket in the first 15 overs. It was Shardul Thakur who got the first breakthrough as Martin Guptill departed scoring 32. Tom Blundell who was making his debut was stumped out for 9. Trying to step out of the crease against Kuldeep Yadav, he was totally outfoxed and KL Rahul affected a lightning stumping. However, it was Henry Nicholls who stood out with the bat.

The Kiwi opener was superb with the bat as he played a timely knock. He stitched an 85-run partnership with Guptill followed by a 62-run stand with Taylor. Nicholls was looking set for a ton at Hamilton. However, skipper Kohli’s fantastic effort meant that a set Henry Nicholls was run-out for 79. From there on, it was Ross Taylor and skipper Tom Latham who took over the run-chase.

You cannot take chances when there's Virat Kohli with ball in hands, he removes Henry Nicholls with the hit from Cover. Brilliant breakthrough for India!!

Taylor-Latham seal it for the Black Caps 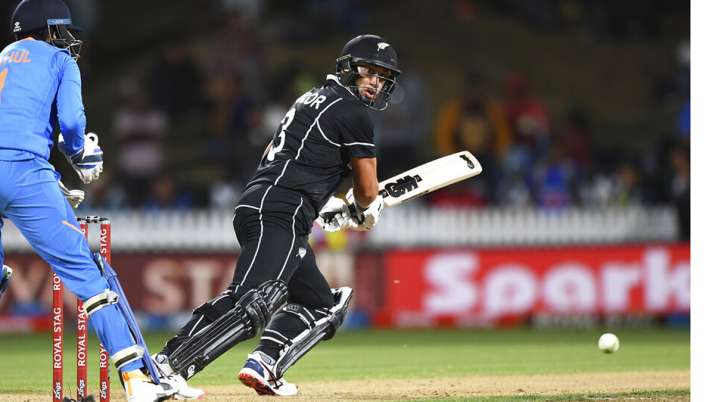 Captain Latham who came into bat following Nicholls’ wicket didn’t allow any momentum to India. On the other hand, Ross Taylor continued his onslaught against the visitors. Both combined for a match-winning partnership of 138 runs from just 79 balls as they took the Kiwis closer to the target. Latham scored a splendid 69 from 48 balls before getting out to Kuldeep Yadav. With the run-rate less than run-a-ball, the job was already done.

Taylor went on to smash his 21st ODI century as he remained unbeaten till the end. While the Black Caps lost quick wickets with Jimmy Neesham and Colin de Grandhomme dismissed cheaply, Santner hit a six and a boundary off Shardul to level the score for the hosts. Taylor then took a single off fine leg as New Zealand achieved their first victory in the series after being whitewashed in the T20Is.

Ross Taylor has become the first NZ batsman to score 2000 runs in international cricket on one ground. Averages 54 at Seddon Park in 39 games. #NZvIND

The Men in Blue did well with the bat but failed to capitalize with the ball. The fielding wasn’t upto the standards as there were several dropped catches as well. India now play a do-or-die clash on Saturday in order to stay alive in the three-match ODI series. A win will make the third ODI a decider while a loss will mean the hosts seal the series at Auckland.