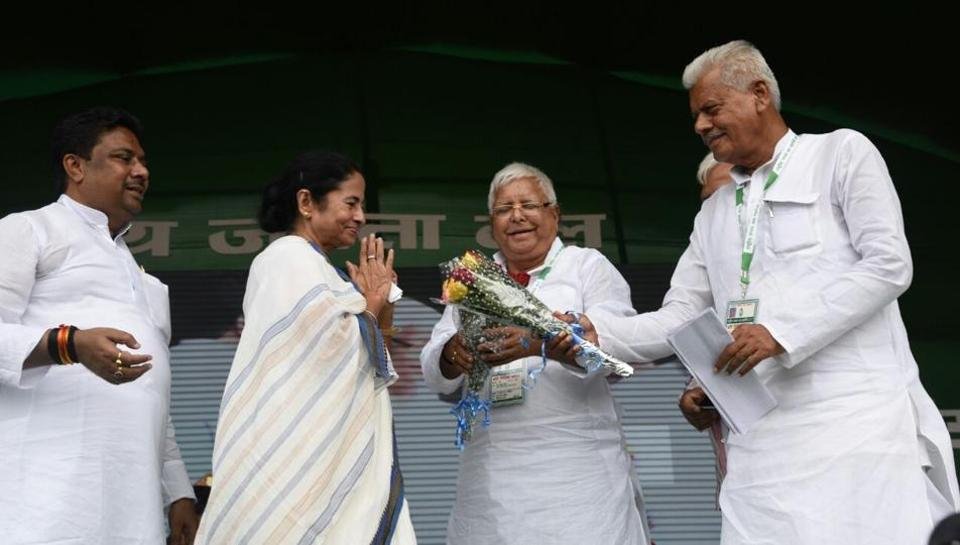 Is Bihar Politics A Mirror Of Current Indian Psyche?

Lalu Prasad Yadav’s RJD vows to uproot corrupt BJP, but who is answerable for their own corruption charges?

Lalu Prasad Yadav’s Rashtriya Janta Dal (RJD) led a rally in Patna under the anti-BJP banner of ‘BJP Bhagao, Desh Bachao’. The rally was organised to declare a war against the ruling party in the state and the center. Also to decry the disloyalty by his former ally Nitish Kumar, uniting the opposition against the one common arch-rival, Bharatiya Janta Party (BJP).

The rally which was organised on August 27th drew a huge support from 18 opposition parties. It was joined by many prominent politicians from the opposition. West Bengal CM Mamata Banerjee, Congress’s Ghulam Nabi Azad, along with a couple of rebel JDU MPs Sharad Yadav and Ali Anwar participated in the rally. The sole purpose of the rally was to slam the central government as well as its new ally Nitish Kumar’s JDU. While the RJD chief Lalu Prasad Yadav didn’t leave any chance to criticize his former partner Nitish Kumar, calling him a ‘traitor’ and a ‘turncoat’, the opposition followed in his footsteps and denounced the governance of NDA. 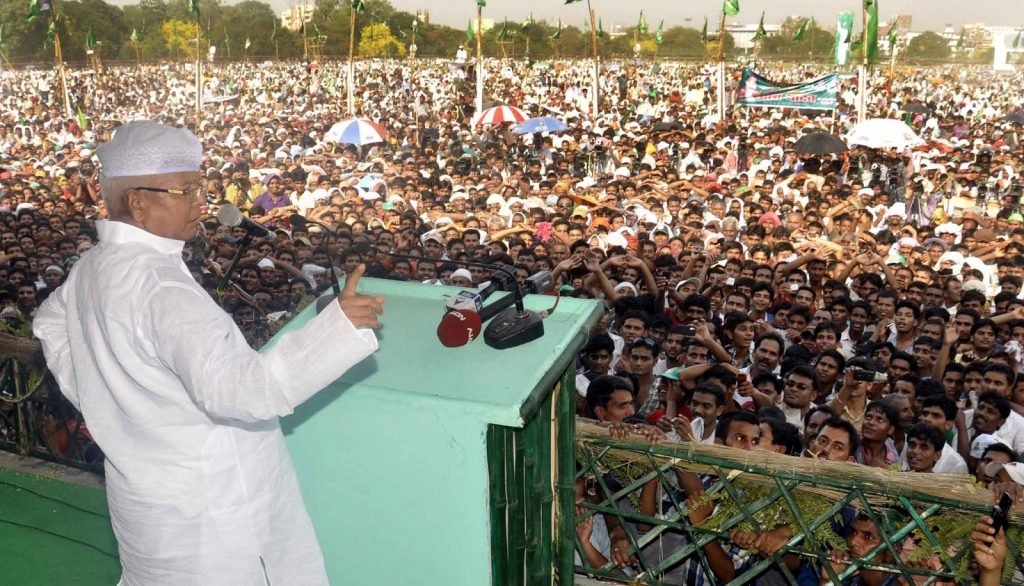 There are a number of cases against the kin and the RJD chief himself. This includes Railway Hotel scam, Benami Properties, Rs 8000-crore Money Laundering Case and the most famous Fodder Scam. What is surprising for me and a big part of the country, especially people living outside Bihar is how and why do people still vote and support politicians with criminal and corruption cases? Why do they bring them back into power even after suffering at their hands for over one and a half decade?

If we talk specifically about Bihar politics, there are a number of factors that directly or indirectly affect the people of Bihar. Brainwashing them and making them a yes-man of corrupt politicians. 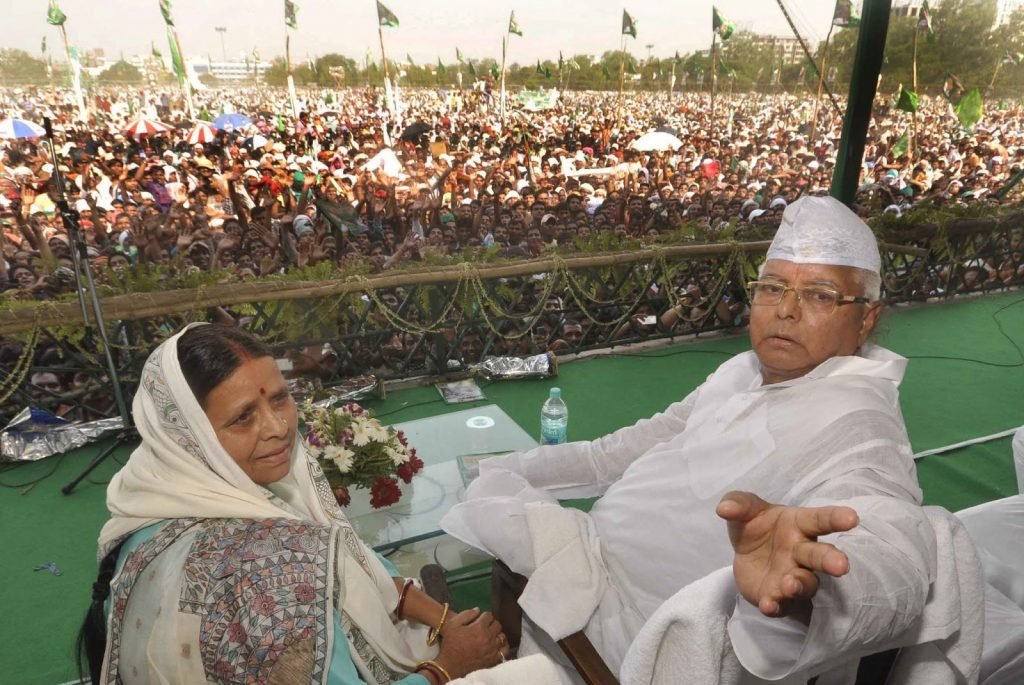 In all the native Bihari politicians, only Lalu Prasad Yadav could successfully establish himself as a local rustic Bihari icon. With the help of his facetious speeches filled with catchy slogans and nicknaming other politicians like ‘Jumla Babu’ in Bhojpuri accent.

It’s a well-known fact that caste and community prejudice is prevalent in Bihar politics. RJD is one of the political parties which benefits from it the most.

The Forward vs. Backward argument

A number of politicians in India have the remarkable quality of turning any election into a Forward vs. Backward heated argument. RJD is one of them. With the lack of a proper manifesto, they always have this ‘Forward vs. Backward’ trump card to play, In order to avail the backward vote bank.

All these points still fail to answer the most important questions raised, how criminals end up getting so much fan following? Why people happily neglect their wrongdoings and back them up?

One recent example is the case of rape convict God man Ram Raheem. Crowds of his followers went on a rampage, destroyed public property and 36 people lost their lives.

One in five members of the Lok Sabha has at least one pending criminal case against them. A number of prominent politicians have serious cases of corruption or criminal or both against them. What is more shocking is that some of these leaders are not accused of nonviolent white-collar offenses like corruption or bribery. But serious crimes like kidnapping, murder, arson, rapes and more.  The data is certainly alarming. So is the political scenario of the biggest democracy of the world. Why do the people of this country let criminals and corrupt politicians rise to power and suck wealth out of this country? Do we have a propensity to vote for dons and politicians with Criminal Records?

There are a number of reasons why Indian political parties likely select and field candidates with criminal records. Especially in a situation when they are facing a higher degree of electoral uncertainty to make their presence known. A person with a past in the world of crime has a higher chance of getting the attention of the public in response to greater electoral competition. Mostly in constituencies with a low literacy rate. The reason behind this is that ‘alleged’ offender candidates have the ability to intimidate voters. The population of the constituency matters a lot as intimidation tactics work best in areas with low literacy rates.

But why voters willingly back them?

Many times most voters are not aware of the background of the politician. Milan Vaishnav, a political scientist explored the link between crime, democracy and the marketplace for criminals in his book, ‘When Crime Pays: Money and Muscle in Indian Politics’. In his book, he explained that in a place where people do not fear the law and the law is weak i.e. the government is unable to carry out its responsibilities effectively and the society is divided into caste and communities, many voters view these ‘alleged’ criminals as saviors and often neglect their past.

These politicians often only talk about their own community or a segment of the society’s interest rather than the entire constituency. They promote this message by explicitly serving their narrow segment of the electorate. In a fragmented country like India with a multi-party political system, you can win elections by rallying your core supporters. This is what happens in states like Bihar. Where one party talks only about the interest of a particular segment of the society. Reserves its vote bank in the form of backward castes, Yadavs, and minority.

Ignorance of the voters

In many underdeveloped places where people still long for basic necessities like education, job opportunities, electricity, roads, the behavior of a common voter is different than a voter in a metropolitan city. People are often so fed up of the government that the background of the new candidate doesn’t matter. Politicians who have outlaw reputations masquerade as a strong protector, often highlighting their criminal reputations. 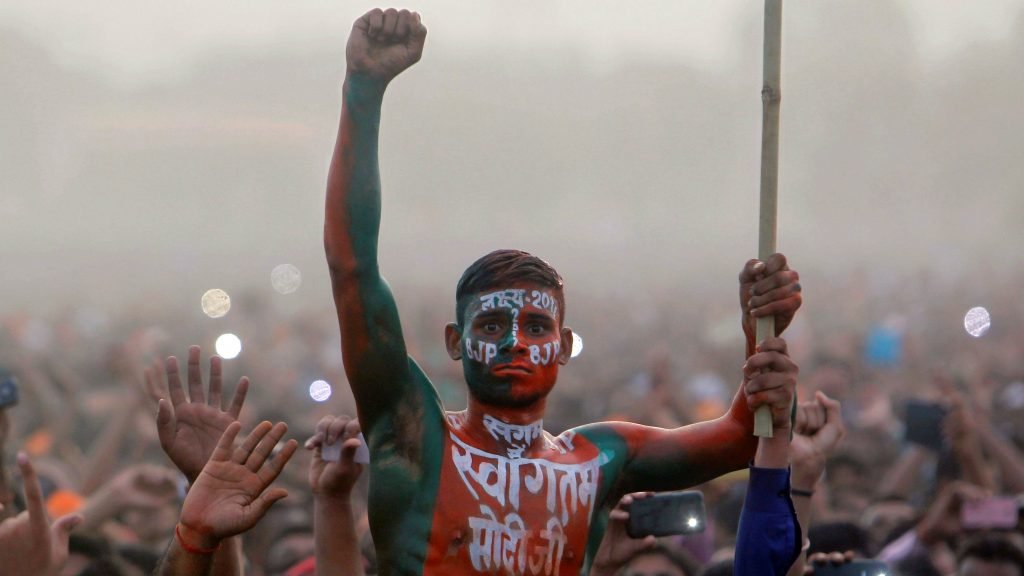 A study has been conducted to evaluate why people elect such criminals. To know whether lack of information is the root cause of criminals entering politics. The study was conducted in the slums of Delhi. The criminal background of their politician was told to the voters. Surprisingly there was no apparent impact on the voters. As if there was nothing they didn’t already know about their politician. It’s just that neither do they care about it nor does the rural unprivileged population.

Even well-informed voters support outlaw candidates. Especially where social divisions play a big role in the society. In such a society there is a space for criminal candidates to project themselves as a Robin Hood. Mohammad Shahabuddin in Bihar is one fine example of such a situation.. He ran his own parallel government with the administration and undertook tasks like dispensing justice.

Will the masses ever learn?

Clearly, crime and politics are inseparable in the biggest democracy of the world. It will remain like this until every Indian learns the role and duties of being a citizen in a democracy. Until political parties become a little more democratic.