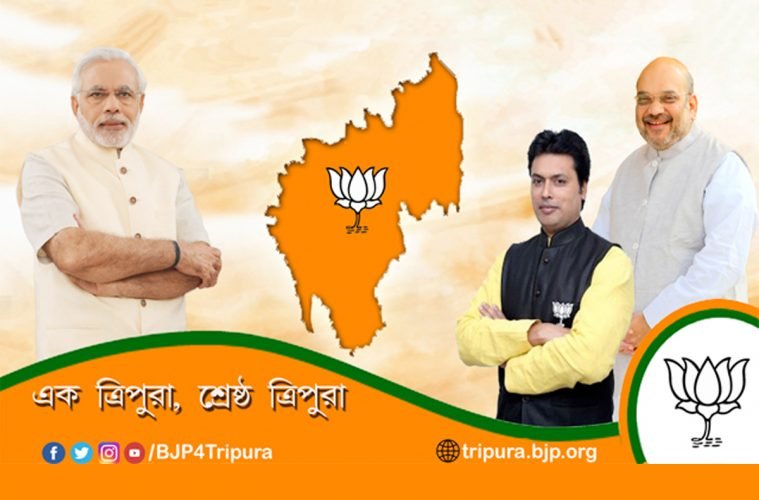 Well, why not? The Bhartiya Janta Party is very much the key player in the Communist state for the polls this year. The party seems to dominate the state in all probabilities. But will it be so easy for the party with its Hindutva ideology to dominate the Tripura polls, a state which has voted for a Communist government for more than two decades now?

Let me break it to you properly.

The year 2017 ended with Gujarat Elections. As expected, BJP conquered their strongest fort, but not without fighting hard for it.  BJP has been relentlessly winning majority of the legislative polls by a large margin, but this time the tables were shaky.

After all, this is what they say is the beauty of a democracy. Masses vote and one dare not take the masses for granted. The year 2018 is going to be yet another politically active year, with 8 states going for polls this year. The states of Tripura, Meghalaya, Nagaland, Karnataka, Mizoram, Chattisgarh, Madhya Pradesh, Rajasthan will be at the alter of democracy. Amongst these 8 states, Tripura will be the first state to witness the clash among the big shots. 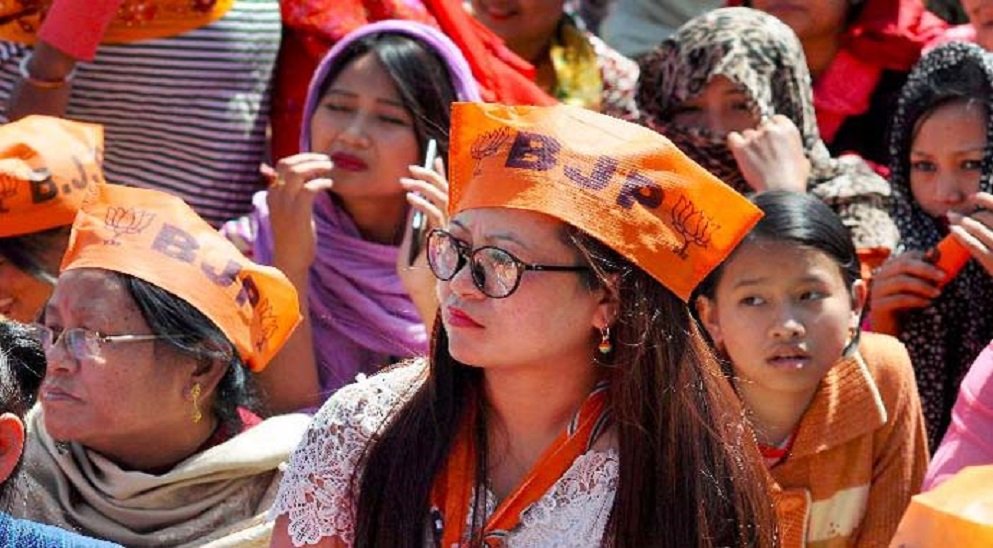 Tripura goes for poling on February 18. And BJP is leaving no stone unturned to continue its winning spree this year as well. Tripura is currently under the Communist Party of India with Manik Sarkar as its chief minister. Sarkar has been the favourite of the masses since 1998 and his reign has been the longest in the state.

But since the Bhartiya Janta Party is eager to paint the entire nation saffron, can the party enter and conquer the state of Tripura this time? For Tripura will be the party’s gateway to the North-east.

For that, we need to focus on the demographics of the state, the 20 odd years of Marxist rule in the state and the man who we cannot forget, Manik Sarkar.

Manik Sarkar- The Leader Of and For the masses

Manik Sarkar is undoubtedly one of the most humble ministers the country has ever witnessed. The 69-year-old Marxist leader is also the ”poorest CM” and the tag is actually appreciable. In today’s time, ministers are accused of holding an office of profit and undisclosed property. Sarkar’s personal property, movable and immovable, is valued at less than Rs 2.5 lakh. 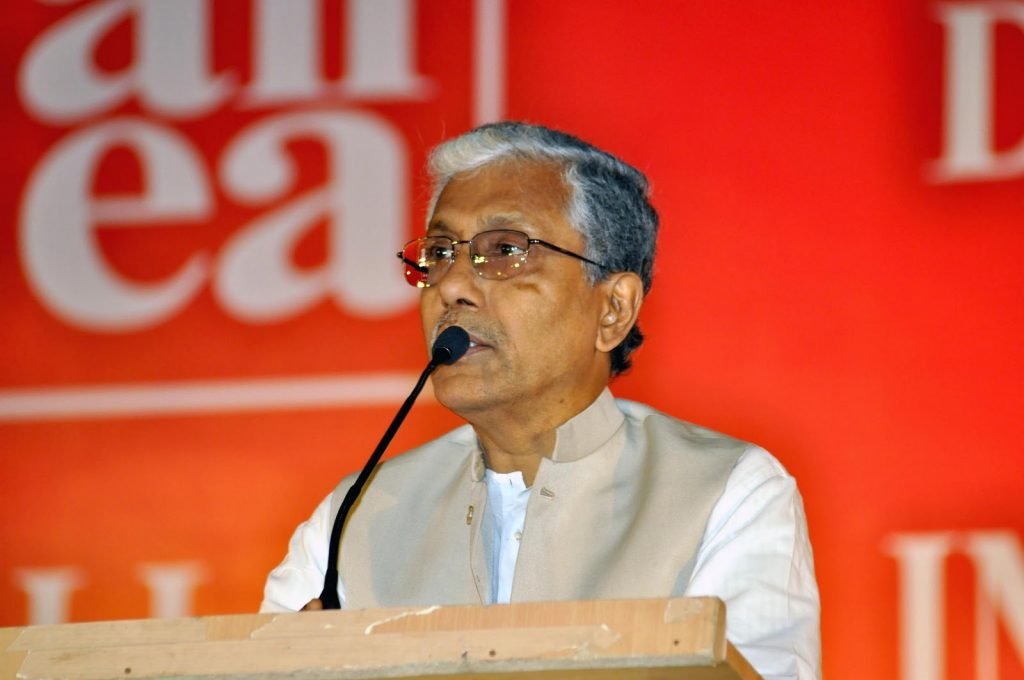 When asked Sarkar about his popularity and respect from the masses, he says,

“We do not keep any secret from the people. That is our secret. We are transparent. We do not make any promise which we cannot fulfil. And we make only those promises which we can fulfil. If we try to fulfil people’s expectations, they will obviously then elect us.’’

One of the longest-serving chief ministers in India, the state of Tripura has become the state with highest literacy rate in his reign. Even after being one of the most disconnected and remote places of India, Tripura became self-sustainable and fastest growing under his administration, all thanks to Sarkar’s governance. Sarkar donates all his salary to his party keeping a small amount of 5000/- month.

Victim of an internal conflict- The Left

Manik Sarkar has undoubtedly proved his mettle as the chief minister for 20 years. But Sarkar’s party, the Communist Party of India (Marxist) has time and again been a victim of its internal conflict. Not just the CPI(M) but the other two parties in the Left front, CPI and CPI(ML) have time and again lost focus on the real issue while fighting for and against a particular ideology. 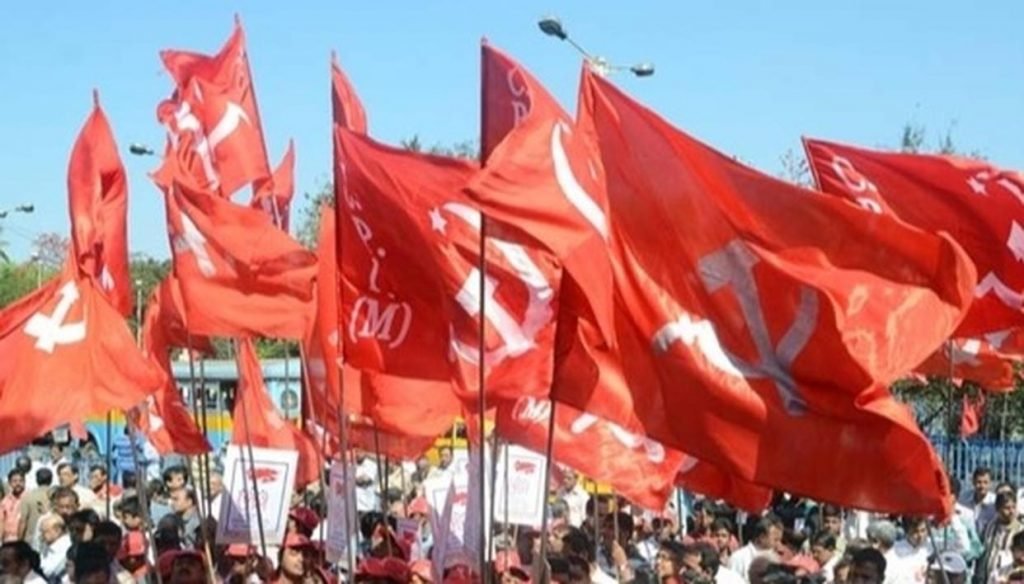 In a country like India where directly or indirectly crony capitalism is prevalent, one can not dismiss the fact that India can never become a completely socialist state. The Left which Charu Mazumdar dreamt of during the Naxalbari Movement is nothing similar to what it is today.

A victim of their own ideology, hypocrisy and internal conflict, the Left seems to be losing this battle.

The inclusion of the royal family into the political scenario- BJP’s trump card?

Maharaja Colonel Bir Bikram Kishore Manikya Debbarman Bahadur of the Manikya dynasty was Tripura’s pioneer king. The last reigning monarch of the princely state before it merged with the Indian Republic in 1949. 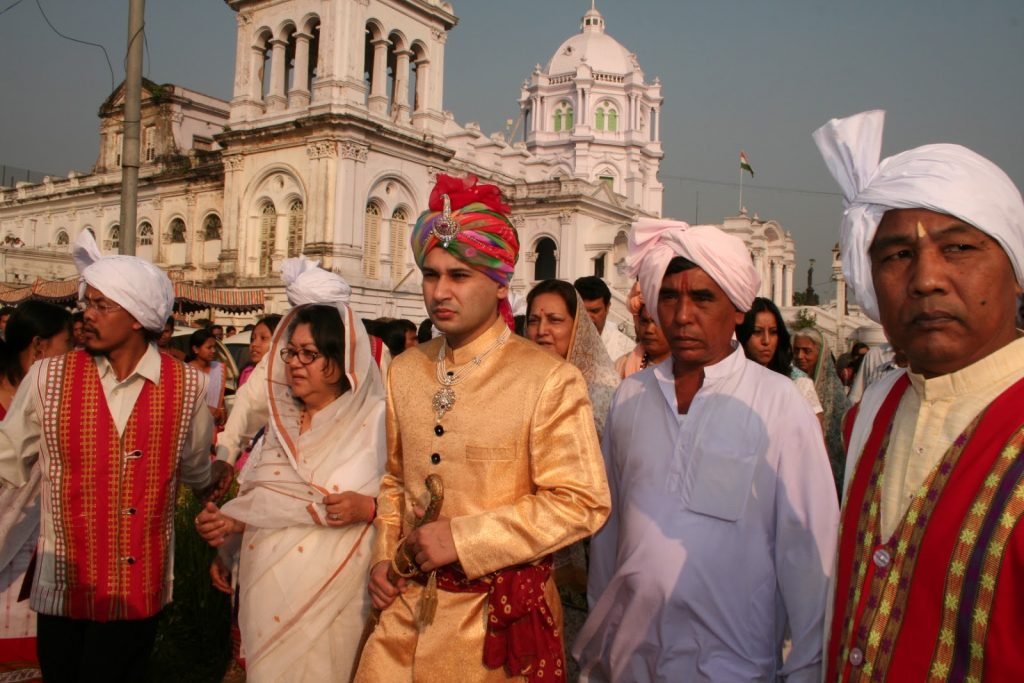 After 69 years of no accession into the political scenario of the Communist-ruled Tripura, there is little to show for the erstwhile kingdom’s royal lineage. But well, the tables have turned this year. In one of the most interesting polls where BJP’s Hindutva ideology will take on the ruling Left Front, the royal lineage has been dusted off and brought to the fore.

“Maharaja Bir Bikram was a vikas purush, an extraordinary man. He did so much for Tripura but has never received that kind of attention. We are trying to get him the Bharat Ratna. We are also trying to ensure that the Agartala airport is named after him.’’

The Communist Party has so far been anti-monarchy. Now with the BJP reviving the state’s royal lineage with an eye on the Left-dominated tribal tracts of Tripura, analysts say the Left is worried.

Back in 2016, the demand for “Twipra land” was echoing in the streets of Agartala. This happened when supporters of the Indigenous People’s Front of Tripura launched a procession. This violence took place during the by-poll of the Tripura Tribal Area Autonomous District Council, where the main contest was between the Communist Party of India (Marxist) and the IPFT. People believe it was a game-play by the Bharatiya Janata Party and the Trinamool Congress. 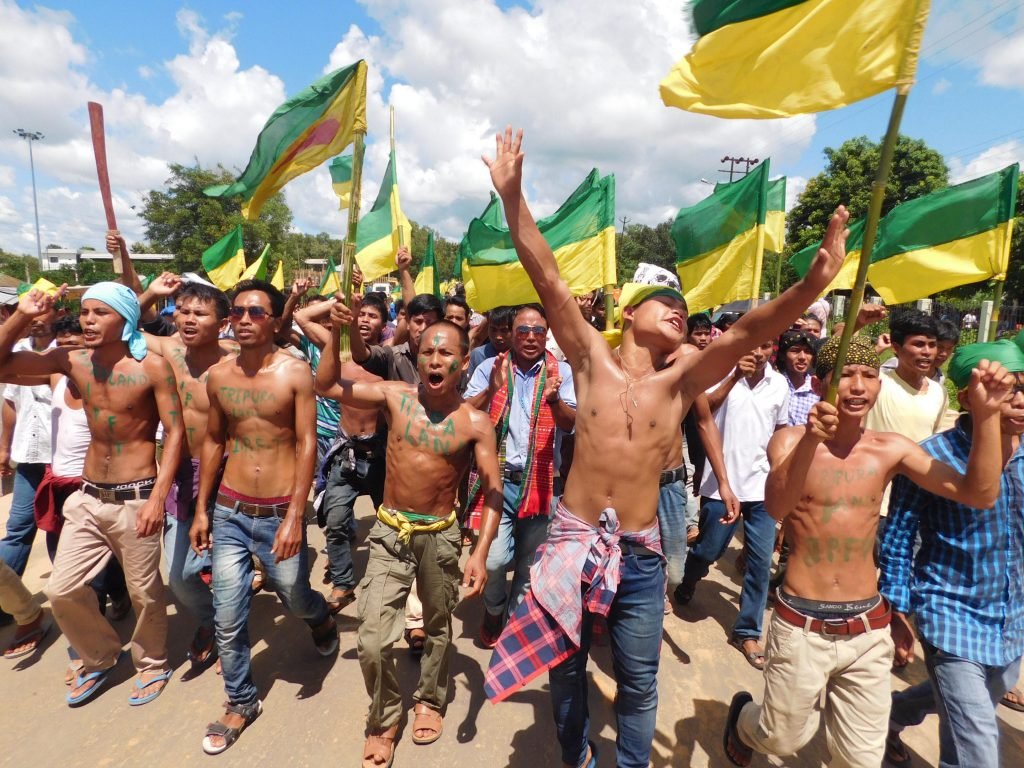 Twipra land- a land for the indigenous masses of Tripura and not the Bengali migrants from the 20th century.

Similar to the many ethnic self-determination movements in the North East, Tripuri identity traces its roots to legends of an ancient, indigenous kingdom. The origins of Twipra land stretch far back into history and prehistory. Though the earliest known records of Tripuri kings date back to the 13th century. During British rule, it became the princely state of Hill Tiperra, until 1949, when the last Tripuri king acceded to the Indian Union.

After 2013, when Telangana was formed, the demand for statehood grew louder, with the Indigenous People’s Front of Tripura (IPFT) holding demonstrations outside Raj Bhavan in Delhi. Over the last five years, it has also held demonstrations at Agartala. Every year, according to local residents, the rally threatens to teeter into violence. In 2016, it did, for the first time.

Since then, the IPFT have been holding protests and rallies, at times peaceful, at times violent. But making sure that their voice is not unheard. In recent years, a section of youth in the rural areas have been drawn to the IPFT and its call for a separate Twipra land. This definitely is not going down well with the ruling CPI(M).

The Bharatiya Janata Party on Saturday released the names of 44 of the 51 candidates for Tripura Assembly elections. Candidates from the party’s ally, the Indigenous People’s Front of Tripura, will contest the remaining nine seats. Six former Congress MLAs, who in 2017 were first a part of Trinamool Congress and then the BJP, were on the list.

The Trinamool Congress and BJP were allegedly supporting the IPFA against the CPI(M). Now with Trinamool leaders moving into BJP and contesting from BJP tickets, the TMC seems to lose this battle. 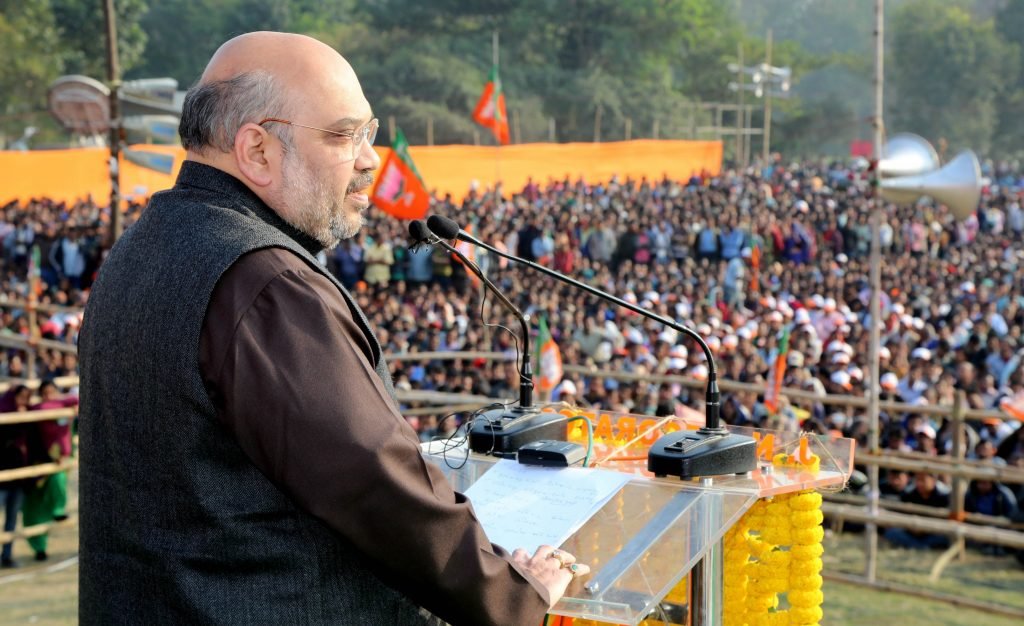 The BJP and most probably, the man with the Midas touch, Amit Shah has very conveniently and tactfully chosen the individuals who have been regular players in the politics of Tripura, keeping aside his and the party’s ideology. By allying with the IPFA, BJP hopes to garner the votes of the ethnic populace of Tripura, whom the Communist party have failed to satisfy.

With Bhartiya Janta Party receiving a setback in the Gujarat polls, the party will make sure it does not ignore the rural population because one minor fault this year can cost them heavily in the 2019 Lok Sabha elections.