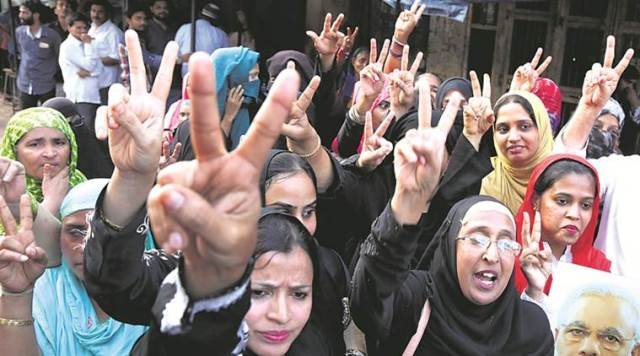 Is Our Country Ready To Divorce The Triple Talaq?

2018, indeed, seems to be the year of change. That this change has been mostly good, definitely helps. In the month of September this year, ex-Chief Justice Dipak Misra retired, leaving behind a legacy of landmark judgements. Section 377 of the Indian Penal Code [criminalising any sodomy as an un-natural sexual act] was struck down. Linking our bank accounts to our Aadhar card became optional. Sabarimala Temple in Kerala is now open to all (in principle).

We can say this is a lot of change. But is this it? Call it a Christmas Present then that the Lok Sabha passed the The Muslim Women (Protection of Rights on Marriage) Bill, 2018, yesterday. The bill has with 245 members of the Parliament supporting it. However, this is not the first time a bill to invalidate the practice of Triple Talaq has been presented before the House of the People.

Not for the first time

Talaq, Talaaq, Talaq! ….and after

Islamic personal law provides for two types of Talaq: Talaq-e- Sunnat, and Talaq-e- biddat. Talaq-e- Sunnat, as the name suggests, is the more preferred form. It is generally believed to be closer to Prophet Mohammad’s teachings. It involves the utterance of the word “Talaq” once, followed by a period of three months where there must be no sexual contact between the wife and husband. If, however, a sexual intercourse does occur, the Talaq stands automatically repudiated.

Talaq-e-biddat, on the other hand, is a form of Talaq where the husband has the authority to divorce his wife simply by saying the word “Talaq” thrice; [hence, giving it the name of “triple Talaq”]. What is more, this process does not necessarily have to be done in person, or in front of a witness. A Talaq given over the telephone is equally valid, as is one given over an SMS. Once given, Talaq-e-biddat is irrevocable, and it is for this very reason that it has always been frowned upon.

What does this Bill entail?

In a nutshell, the Bill makes Talaq-e-Biddat, void (i.e. not enforceable in law) and illegal. Additionally, under Section 4 of the same, any husband who pronounces Talaq on his wife shall be punished with an imprisonment. It may extend to three years and shall also be liable to a fine.

The Bill also provides for a subsistence allowance to be given to the woman so as to enable her to look after herself and her children. The Bill further makes the giving of Talaq a cognisable and non- bailable offence [an offence where Bail cannot be demanded as a matter of right. In such cases, the grant of Bail become a discretion of the Court.]. However, Bail may be granted by a Magistrate. But, he also has the authority to compound the offence [allow it to be settled out of court, between the two parties.]

The tale of the two Banos- a little background

That’s the law. Now let’s get to the facts. The tussle between the Supreme Court and personal law is as old as our country’s constitution. All of us remember the case of Shah bano in the year 1985, titled “Mohd. Ahmad Khan vs Shah bano Begum and Ors.” A man decided to divorce his wife of over forty years in less than four minutes, by simply uttering the word “Talaq” thrice. While the Supreme Court gave a judgment that was aimed at safeguarding the interests of Muslim women across the country and granting them alimony, the Government decided it was averse to development.

In a move that was nothing more than appeasement tactics, the then Rajiv Gandhi government succumbed to the pressure of the Islamic orthodoxy. It hurriedly passed the “Muslim Women (Protection of Rights on Divorce) Act, 1986” which completely diluted the judgment of the Supreme Court and restricted the right of Muslim women to alimony from their former husbands for a period of only 90 days after the divorce. Twenty tears later, in two other cases- Daniel Latifi vs Union of India and Shamima Farooqui versus Shahid Khan case, the Supreme Court of India once again restored justice by interpreting the very same Act to the benefit of the divorced women.

Shayara Bano Vs Union Of India

And then, in 2017 came the judgement in Shayara Bano vs Union of India, where the practice of Talaq-e-Biddat itself was declared unconstitutional by the Apex court. Shayara bano filed a Writ Petition before the Supreme Court, stating that the practices of triple Talaq, polygamy as well as halala nikaah [a practice that requires a muslim woman to marry another man, consummate the same and then take a divorce from him, if she wants remarry the man who gave her triple Talaq] were highly arbitrary and in essence perverse to the Fundamental right to Equality enshrined under Article 14 of the Constitution.

In a majority of 3:2, the Supreme Court made the practice of triple Talaq void and illegal, calling it unconstitutional under Article 14 as well as Article 13 (1) of the Constitution.The Court also considered whether triple Talaq is protected under Article 25 [Right to Freedom of Religion] but, following a review of relevant precedents and Islamic scholarship, concluded that it is not essential to the practice of Islam.

It is this case of Shayara Bano that finds mention in the “Statements and Objectives” portion of Muslim women (Protection of rights on Marriage), Bill 2018. Stating that:

A happy ending, after all?

Perhaps not. While the Bill was passed by a majority of 245, 11 voted against it. Many Congress and AIDMK Members of Parliament chose to voice their opinion. They walked out when their request to refer the Bill to a Joint Committee was rejected. Furthermore, the Bill is yet to go through the Rajya Sabha before it reaches the stage of Presidential assent.

Out with the Old

We are a country that tries and advocates equal rights for all. But we are still struggling to discard certain customary practices that hold no relevance now. Our Constitution would be little less than a mere book if it were not for the Supreme Court. The SC has time and again guarded its sanctity. May it then be in the from a certain emergency-imposing Prime Minister, or in today’s times; when it tries to abolish detrimental practices that have been guarded by Patriarchy. Be it in the name of custom or personal law. I feel, it is time we, as a nation divorced the Triple Talaq unanimously.