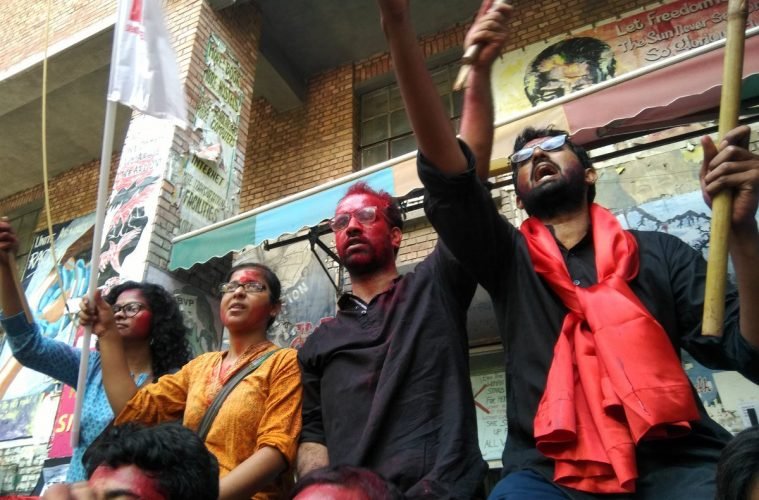 Jawaharlal Nehru University Student’s Union (JNUSU) election results were finally out on Sunday, 16th of September. After high voltage series of events and scuffles on Saturday during the vote counting, the victory was evidently on the United Left’s side. All the left parties fought together in an alliance which included All India Students’ Association (AISA), Students’ Federation of India (SFI), Democratic Students’ Federation (DSF) and All India Students’ Federation (AISF). They were up against the ABVP (Akhil Bhartiya Vidyarthi Parishad), the NSUI (National Students’ Union of India) and the BAPSA (Birsa Ambedkar Phule Students Association). Around 5000 votes were casted and voter turnout was recorded at 67.8%, the highest in 6 years in JNU election history.

After the counting had just started, a scuffle between the Left and the ABVP broke out. The Left accused the ABVP of bringing outside “goons” into the campus to disrupt the vote counting. The ABVP denied the allegations and counter-accused the Left of not informing the ABVP that the counting had started. A complaint regarding the same was also made by the Left to the election authorities. What followed was a 14-hour halt in counting of votes. Finally, the counting resumed after the scuffle toned down. After the results were out, there was an alleged ABVP assault on N Sai Balaji and other students of the Left. The scuffle continued late night and a video of the same was uploaded to Twitter by the former JNU student and left activist, Shehla Rashid.

Listed below is the vote count of the candidates who stood in the top two, at the end of the Vote Counting.

The result in JNU only consolidated the already strong position of the Left in the university. The ABVP still holds strong ground presence in the DUSU with the recent election win reinstating their might. Student politics in the national capital was closely watched by the National Parties and stakeholders of the 2019 General Elections. One can infer from these two elections and predict certain trends in the national capital, and subsequently, of the whole country w.r.t 2019 General Elections. Here are a few of them.

a) The united Left against the Right-wing BJP.

A large sphere of parties of different regions could come together ahead of 2019 and form Prepoll Alliances to counter the Narendra Modi led BJP.

b) The use of issues such as “Urban Naxalism” by the ruling right for political gain and legitimization of crackdown on dissent.

c) The political scuffle and the use of muscle between the left and the right could take center stage ahead of 2019.

To conclude, the democratic tussle and the game of politics in India is on an all time high. And the stakes have never been higher. India’s pressing issues need to be addressed and election is one step forward in the same direction. Will the politics of Left and Right be the only driving force of the upcoming General Elections of 2019? Or will the issues of good governance come first? Only time could tell.