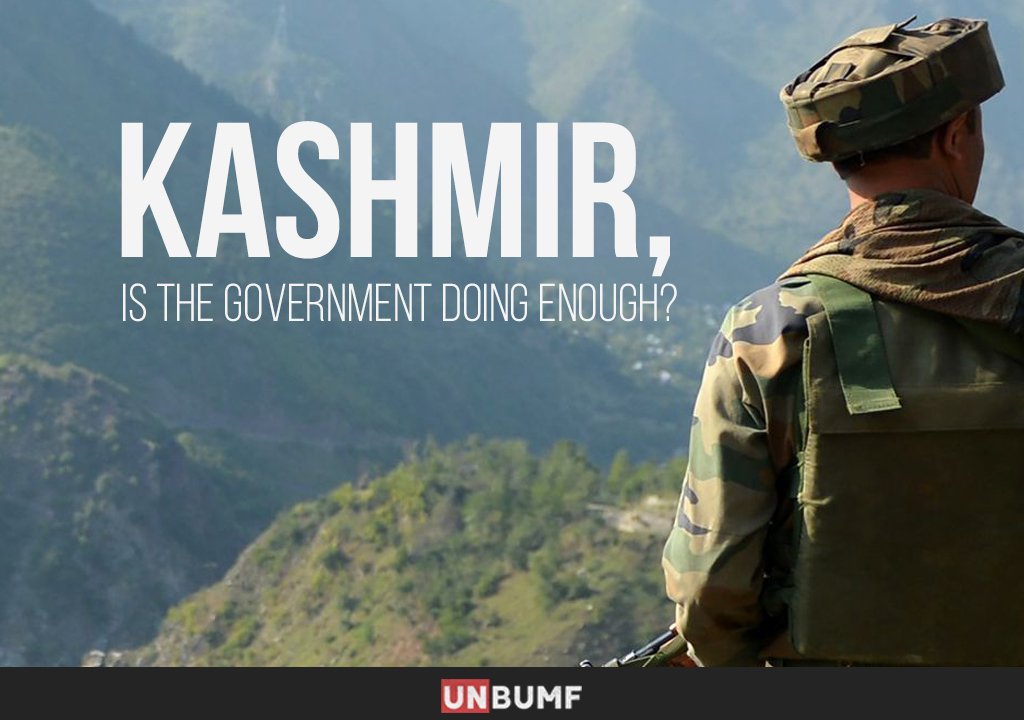 The Ongoing Kashmir Unrest: Is The Government Doing Enough?

Kashmir – the word that once evoked a romantic image of beautiful mountains, misty lakes and rosy cheeked people famous for their hospitality. Today Kashmir is synonymous with conflict, curfews and death. Thousands of deaths.

The Kashmir conflict has turned out to be one of the most complex international conflicts in modern conscience. The root of the problem lies with the ascension of the princely state of Jammu & Kashmir ruled by the Dogra king, Maharaja Hari Singh of India. Then Pashtun Afghan tribes started invading the city. Kashmir was part of NWFP (North West Frontier Province) of Pakistan then. But the tribesmen had already reached to 37 percent of that Western Kashmir, including Muzzafarabad and Gilgit-Baltistan region. Fortunately for the denizens of Srinagar, the capital of the princely state, the Indian state flew in troops and stopped the marauders at the infamous Battle of Badgam. 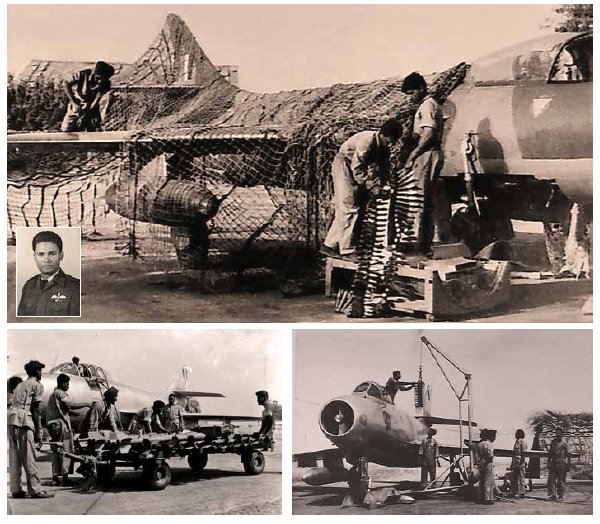 The Indians cried out at this travesty and aggressive action by the Pakistanis. However, the Pakistanis claimed that the entire arrangement was fair as the Indians taking over the princely state of Junagadh which had a Hindu majority but a muslim ruler. The same logic was applicable in case of Kashmir. It was a muslim majority state and thus a part of Pakistan. With these developments, an emergency session of the UN Security council was called. There resolution no. 47 was passed. This called upon immediate withdrawal of Pakistani proxies, soldiers and citizens from Kashmir. This was to happen followed by withdrawal of Indian troops under UN supervision. After the demilitarization was complete, a referendum was to be held in which the Kashmiri public was to decide to stay with India, Pakistan or go its own independent way. But of course, this didn’t happen.

After three devastating wars and numerous protests, elections were held in 1984. This brought Ghulam Nabi Shah, supported by Indira Gandhi to power in Jammu and Kashmir. This irked Pakistan to such an extent that they decided to open the deadliest front yet in this incessant conflict. Shah lacking the people’s support turned to islamists in the valley. This led to Hindu protests in Jammu and large scale violence. Pakistan capitalizing on this, started funding JKLF (Jammu Kashmir Liberation Front), a then non-entity to incite anti-India violence in the valley. Thus, culminating in exodus of Ethnic Kashmiri Pandits from the valley which has been labeled as a genocidal ethnic cleansing by the international community.

What started off as a nationalist movement aimed at gaining autonomy and identity for people suddenly seemed hijacked by the nationalistic agendas of a failed nation. Pakistan on one side and struggling, desperately poor democracy, India on the other. Violence on both sides, genocides, ethnic cleansing, a minor war, reprisals and counter reprisals followed one after another. The big question is, how did we get here?

Kashmir is a long and terrible testimony to India’s strategic failure in tackling a nationalistic insurgency. Some would suggest that it was India’s overconfidence that led us to this juncture. Punjab, Manipur, Assam, Nagaland and even to some extent the Naxal violence in the tribal belts of Central India had been tackled. A combination overwhelming force, string of brilliant officers and AFSPA or Armed Forces Special Powers Act which gave the army a free hand to deal with local volatile elements with impunity without any sort of legality pertaining to their actions.

Kashmir turned out to be a different cup of tea altogether. What the Indian regime couldn’t grasp at that time was the zeal and the enthusiasm of the Kashmiri Muslims being fed the feeling of resisting a non-muslim regime. India was suddenly perceived a ‘Kafir’ invader like the Dogras a century before. They couldn’t resist them then. But now they had the weapons, the money and most importantly the zeal to counter the occupying invaders.

Men, women and children all came out on the streets to oppose the Hindu Indian Army and the police. There they celebrated the ‘martyrs’ in this holy war against the Indians. But after nearly half a million troops deployed, over 70,000 deaths, and an entire generation lost, the movement started to lose its steam in the early 2000’s. Peace returned to the valley. Tourism made a comeback after a decade. There were minor disturbances, sure, but not at the scale seen before. The valley was actually calm.

Then, Burhan Wani, a known ultra, was gunned down by the Army in 2016 and all went to hell. The valley saw the worst violence it had seen since the beginning of the conflict. Shopian, Anantnag, Srinagar all went up in flames. The curfews were back. So were the protest. But this time, there was a new man in power in New Delhi. And he was not a man of half measures.

Pellet guns, shootings, stone pelting and arson, all but consumed the valley. In the end hundreds were injured and dozens dead. And here, the most major chink in India’s response to the entire issue came in the light. The Kashmiri people did not trust the regime, worse, they now openly opposed it. 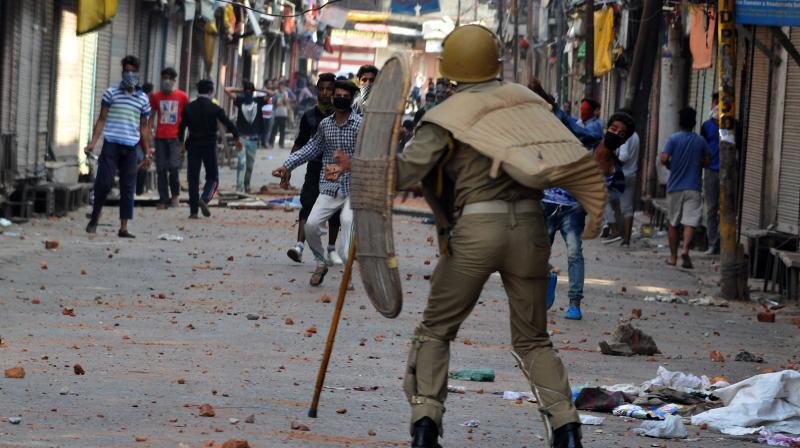 Assumption of power of Right Wing nationalist party in the center gave the separatist the same tone to incite religious violence in the valley as in the early days of the conflict. The separatist rallied the populace. They were brainwashed and scared after decades of conflict. They were sure that a Hindu nationalist regime is coming for them, to depopulate the valley. This mass paranoia exploded in the aftermath of Burhan Wani’s encounter. The militant’s body was draped in a Pakistani flag and paraded in his hometown of Shopian and the slogans, reminiscent of those in 1990, were heard again.

In retrospect, India failed to win the confidence of the people. The parts of Kashmir that are illegally occupied by Pakistan, the overwhelming Muslim population had no expectation for a space to protest or resist in a nation run a by a brutal Military Political junta. In India, especially after the rosy days of the early 2000’s, the Kashmiris started favoring Indian rule as just and democratic. They started hoping for national integration without compromising their special autonomy within the Indian Union. But the regimes disproportionate response to the violence in 2016 fueled the fire started by the separatists. They called these actions by security forces a proof of the intents of the ‘Kafir’ regime to perpetrate a sort of ethnic cleansing of the valley on behest of the ruling parties ideological mentors. Clearly, the Kashmir formula has failed and needs a major revamp. So what should the government do?

Bringing Pakistan to the table on this issue seems close to impossible. Atleast until its hard diplomatic stance of calling Kashmir its ‘Jugular Vein’ remains. It’s the Kashmiris, muslims, pandits and sikhs, on the Indian side who need to be a major stakeholder in this. People’s hearts and minds needs winning. This may mean the need of bringing the might of money and opportunities to the valley. This will also automatically delegitimize the Separatist who call upon entire generation of Kashmiri youth to the streets. Meanwhile their own families and children stay safe in their plush residences far away from the valley.

The Kashmiris need to know that they are as Indian as any of us. They need to feel it emotionally, socially and economically. And this can happen only when we agree to sit and talk. Not just with handpicked representatives but the people. The real people of the towns and villages of the valley. The agha in Badgam, the village headman in Qazigund, an average housewife in Gurez. Or even the Kashmiri Pandit family languishing in refugee camp in Jammu.

We need to integrate the most integral part of India.