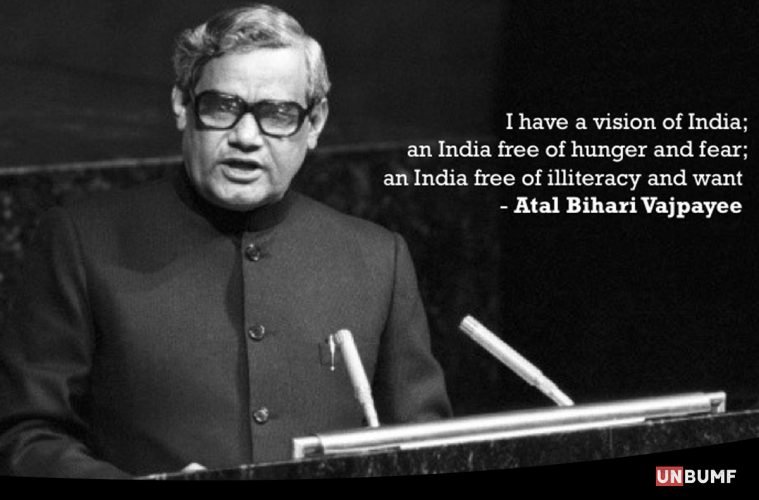 Politics is a dirty game. And in democracies like India, it gets worse. If you have ever gone to vote, you would would have heard at least one speech in your life. And you would agree that being a part of the political scene is a tough job for anyone.

Being a bullpen, most politicians fail to generate enough respect that cuts across party lines. However, there are tall figures in politics who become larger than life. Some are memorable only for one or two decades at max. And then there are some people who linger on. It would not be an overstatement to say that Atal Bihari Vajpayee is one such politician. Old age might have taken a toll on him; but given the oratory skills he possess, he has lured old age to comfort him.

Born on Dec 25, 1924, Vajpayee’s early education was assured as his father was a poet and a headmaster. Gwalior was then not politically active despite it being a kingdom. But that did not stop Vajpayee from being a part of the big P. He got the first taste of politics when he and leaders from opposition were thrown in prison during the emergency of 1975. Later Vajpayee co-founded the Bhartiya Janata Party in 1980.

While he grew as a politician, his stature as a leader grew by leaps and bounds during his prime ministerial stints. Though he was a parliamentarian for nearly forty years, he had his first tenure as a prime minister for mere 13 days. Then the second term went full which elevated him to a firm position of grand leaders. He remains one of the most suave statesmen the country had till date.

The Gift Of Gab

In his heydays, Vajpayee’s gift of gab attracted praise from everywhere including from Jawahar Lal Nehru. His skills could only be matched only a few leaders. Nehru even predicted his future as a prime minister. Even when he was ageing, Vajpayee’s pauses while giving speeches became his trademark.

As a prime minister Vajpayee’s term was rife with instability, if not coup. In the first term for 13 days it became clear that his government would not be able to sustain. Thus, Vajpayee resigned and fresh elections were held. The next elections also put the BJP-led National Democratic Alliance ahead of everyone else. Vajpayee again led the government. Thanks to a tea party hosted by Subramanian Swamy, Sonia Gandhi and the now deceased J. Jayalalithaa came together in an unofficial alliance of sorts.

Jayalalithaa’s All India Anna Dravida Munnetra Kazhagam pulled its support from the center. The Government collapsed again. While Vajpayee continued to remain the interim prime minister while the nation got ready for third nation-wide election in less than 5 years, the year 1998 changed the fortunes for Vajpayee as a prime minister.

Then in the month of May 1998, India announced that it had successfully conducted five underground nuclear tests in Pokhran desert, 24 years after it had first conducted them in 1974. These tests made the world sit up and notice the power that India was about to become.

Political luminaries from all over the world were shaken out of their slumber by the enormity of news that had hit them. The famed West, including countries such as United States, Canada, Japan, Britain and the European Union reacted in the most knee-jerk fashion possible by imposing sanctions on India. Vajpayee had anticipated these actions and hence did not buckle under pressure.

The second blessing in disguise for Vajpayee as a prime minister was the Kargil War. India had to launch to a full-scale war against its neighbour because of its continuing mischief. The war followed an earlier peace process pushed aggressively by the then Vajpayee government. However, as early as June 1999, the army took charge of operations in Kashmir and managed to successfully push back the infiltrators as well as the Pakistani army. This boosted the image of Vajpayee as a strong leader and a statesman who was not afraid to take a tough decision in the face of adversity.

Both the events helped in shaping the future for BJP as it won 303 out of the 543 seats in Lok Sabha and formed a stable Government. The Government had a pretty good run until the riots of 2002, when Vajpayee’s lack of strong inaction on the then Gujarat Chief Minister Narendra Modi hampered his secular image. The party took a beating at the hands of Congress in 2004 and was drubbed very badly. Shortly thereafter, the parliamentarian from Lucknow announced his retirement from active politics and has been nursing bad health ever since. 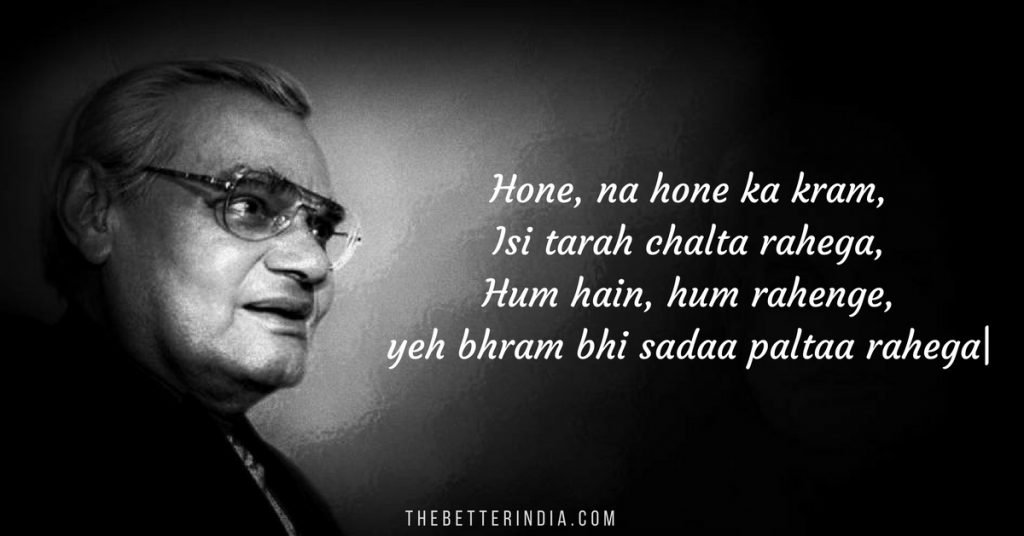 Today, in the face of divisive politics, the need for a leader like Vajpayee is  more than ever. If there ever was one leader who could take together the opposition and walk comfortably while taking such decisions, it is Atal Bihari Vajpayee.