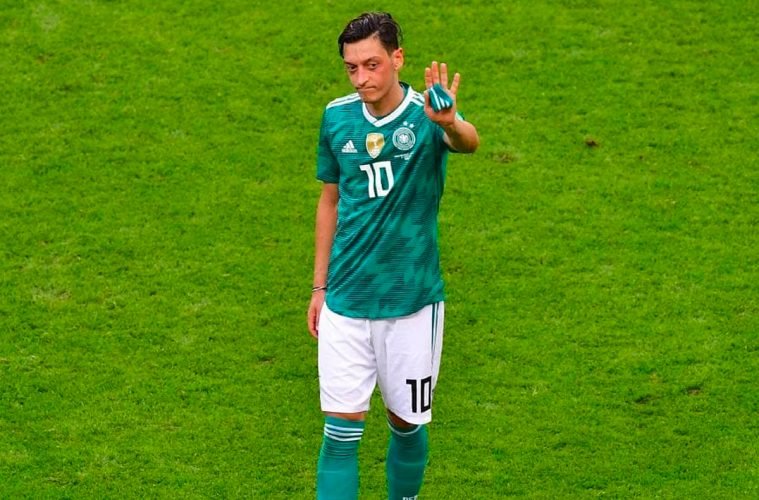 The German National Team had a dismal run at the 2018 FIFA World Cup. German media has been at the forefront to criticize the national team after the debacle. The German side saw an infamous exit in the early group stage. They were unable to qualify for the round of sixteen and finished last in the Group F. But the German midfielder, Mesut Ozil was specially “scrutinized” by the media because of what he claims to be “his Turkish background”.

Ozil was born and raised in Germany, but his parents are from turkey itself. Ozil came out in public via his twitter account to express his views and offer his resignation. He argued that the treatment he got from the sponsors, officials and the media was “racist” and “disrespectful”.

Media singled out the 29 year old especially after he met the Turkish President, Recep Tayyip Erdogan this May. It is notable that political spectators accused Erdogan of using the trip to London as a campaign for elections back home. “I’m aware that the picture of us caused a huge response in German media and whilst some people may accuse me of lying, the picture we took had no political intensions” said Ozil in his statement.

The Accusations and Denials

Ozil was a key part of the winning German side in FIFA 2014. He has played in 92 matches for Germany since his international debut in 2009. “I am German when we win, but an immigrant when we lose” he said in his statement criticizing the media. “My friends Lukas Podoski and Miroslav Klose are never referred to as German-Polish, so why am I German-Turkish? Is it because it is Turkey? Is it because I’m Muslim?” he said, questioning the double standards of the media. He also expressed his discontent with regards to the “threatening phone calls, hate mails and the social media abuse” that he and his family had to face after the world cup exit.

However, the most upsetting thing of all according to him was the treatment of German Football Federation(DFB). “Arguably the issue that has frustrated me the most over the past couple of months has been the mistreatment from DFB, and in particular the DFB President Richard Grindel.” He said that he tried explaining to Grindel about his Turkish ancestry and heritage but got belittled in return. “I will no longer stand for being a scapegoat for his incompetence and inability to do his job properly” he added. The DFB however, on Monday denied all of the Ozil’s accusations.

“The treatment I have received from DFB and many others makes me no longer want to wear the German national team shirt.” Ozil said. “Enough is enough, this is not why I play football, and I will not sit back and do nothing about it. Racism should never, ever be accepted.” He concluded.

Ozil’s announcement received support from German Justice Minister Katarina Barley. She tweeted “It is an alarm signal when a great German footballer such as @mesutozil1088 feels unwanted in his country because of racism and not represented by the DFB”.

The Arsenal Football Club, the club Ozil plays for, also came out with a tweet. The tweet consisted of the Arsenal FC players practicing in Singapore with a caption “Our diversity is a big part of why we are such a special club #ArsenalForEveryone”

But Bayern Munich (German football Club) president Uli Hoeness had other ideas. Hoeness claimed that the German team would not miss Ozil. He questioned his commitment to the Nation and his professionalism. “I am glad that this scare is now over. Ozil has been playing s*** for years. He last won a tackle before the 2014 world cup. And now he and his s***** performance hide beyond this picture. Whenever (Bayern) played Arsenal, we played over him because we knew that was their weak point.” He added that from a “sporting” point of view Ozil has no place in the German National Team.

Ozil should not have been made the scapegoat for the performance of the whole team. Ozil’s identity as a German should not be subject to his performance on the ground. The issue of Mesut’s resignation goes far beyond the Football Ground. One has to ask questions with regards to the integration of immigrants into societies and their acceptance.

This issue resonates the mindset of many who consider themselves as part of a superior race. One can also infer the rise of far right politics in Germany and Europe in general. Future suggests more immigrants for Europe and the world in general. This could possibly make the fate of immigrants to be the new world dilemma.