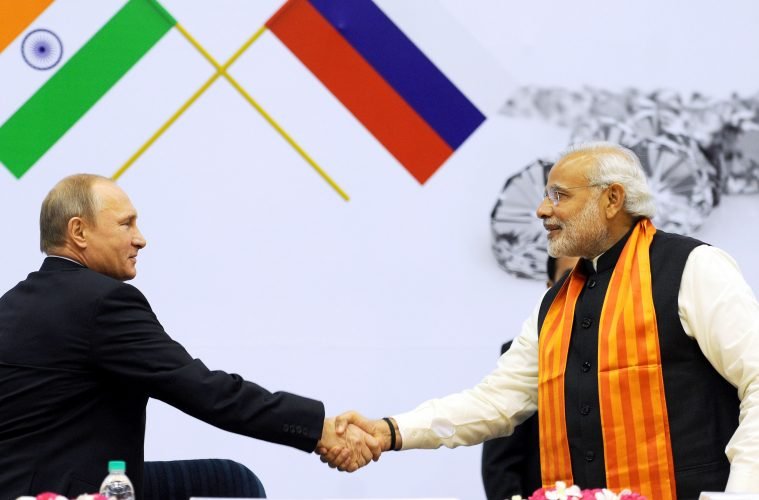 Modi’s Informal Meet With Putin: Another Diplomatic Master Stoke By The PM

One can imagine seriousness of an issue if Rahul Gandhi starts commenting on it. That too without any gaffes or prompts. ‘India-Russia relations’ is one such issue for the Narendra Modi Government. Since decades now, Russia has been India’s key ally and supplier of weaponry and advanced defence technology. However, the Indo-Russia ties have been a little strained since the past decade. The prime reason for this being the growing India-US relationship since Vajpayee and Clinton turned over a new chapter at the start of the 20th century.

Anyways the US-Russia relations have been deteriorating; more so after Russia has been in the eye for meddling in the 2016 US elections. Russian relations with Europe also worsened after UK accused Russia of trying to assassinate a spy in Britain. The timing of Prime Minister Narendra Modi’s visit could not have been better. The trip, planned on a short notice, is an informal meeting. That means there are no official dinners, honour guards or any formalities, involved. PM Modi and Putin will focus on crucial issues for both the countries.

Am confident the talks with President Putin will further strengthen the Special and Privileged Strategic Partnership between India and Russia. @KremlinRussia_E @PutinRF_Eng

PM Narendra Modi and Putin discussed issues relevant to their respective countries and those that affect the relationship of both the states. One of the major problems is the US sanction against Russia for their involvement in Ukraine. The CAATSA act of US laws holds countries liable for sanction if they deal with firms from the sanctioned country. This impacts India as Russia’s official arms trader Rosoboronexport falls under this category. Earlier, an Indian official had stated that India will not allow a third country (US) to dictate how India procures arms.

Another Sanction by the US against Iran after pulling out of the Nuclear Deal will also impact India. Iran is the third largest source of oil for India. Putin and Modi discussed the issues surrounding US sanction and its impact on both India and Russia. US issued a statement warning all countries from procuring weapons from Russia in light of the US sanction. Notably, India is en-route sealing a deal for purchasing five S-400 Triumf air defense systems at around $4.5 billion from Russia.

Rahul Gandhi and opposition have been claiming that India-Russia relations have worsened to the extent that Russia is selling weapons to Pakistan. True! there is no doubt that the relationship is undergoing a significant change. But that is mainly due to the changing world order. Russia has only been selling armed transport vehicles to Pakistan and not actual weapons. Russia getting closer to China and Pakistan is being viewed as a counter to India’s improving relations with the US. However, Trump’s America first policy has given Modi an opportunity to balance the relations with China, Russia, and the US.

Extremely productive discussions with President Putin. We reviewed the complete range of India-Russia relations as well as other global subjects. Friendship between India and Russia has stood the test of time. Our ties will continue to scale newer heights in the coming years. pic.twitter.com/EnNMarJkcB

This meeting with Putin in the first-ever informal set-up is yet again a diplomatic masterstroke by the Indian Prime Minister. Russian Foreign Minister Sergey Lavrov said in a statement to the Russian news agency Tass that possibilities of creating a free trade zone of EAEU and India were also discussed. He also talked that other aspects such as cooperation in the United Nations were also discussed. India would need Russia and US lobbying on its behalf to get a permanent seat at the UN.

The opposition may be mocking PM Modi for his foreign visits; but India’s position is changing. And with the changing world order, soon  the opposition (Both Internal and External) will be at a loss of words.