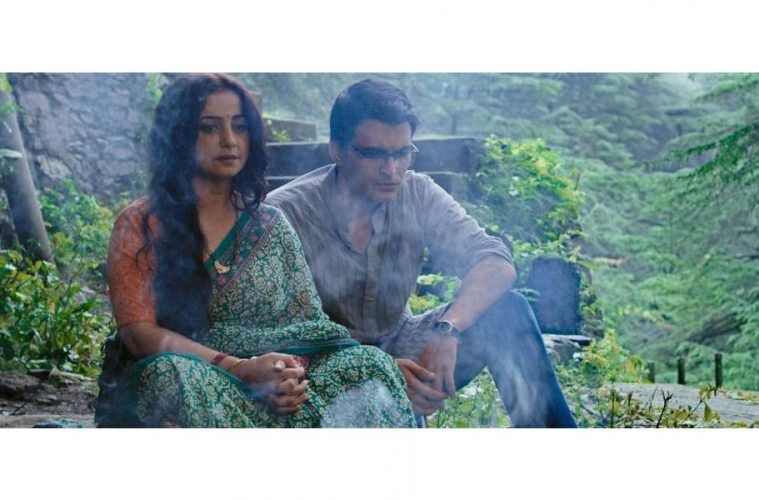 Music Teacher: Divya Dutta Binds The Plot With Her Charisma

This line sums up what it is like living in the hills, remote or not. From where even sadness can not make its way out to the city, where the dreams are. Where everyone else is. Where Amit is.

Set in Shimla, the capital of Himachal Pradesh, the Netflix movie Music Teacher starts well by introducing the protagonist right at the beginning. From the very first scene itself, the conflicted mind of Beni Madhab Singh played by Manav Kaul is evident. He wants to smoke, but flicks the cigarette away at the last moment. Why and what prompts him to do that is slowly made clear, later in the movie.

The Idea At the Heart

Beni or Beni da, the son of a famous singer, is a trained singer himself. Having come back from Bombay after the demise of his father, Beni is shown to be in two minds throughout. He wanted to go to Bombay to become a singer in the Bollywood. Life had other plans. And through Jyotsna Ray, played by Amrita Bagchi, Beni tries to achieve what he could not. He loves her, but pushes her away to work, become famous. So that he too could climb that ladder one day.

But, she is a famous singer now. In Mumbai. And would not return his calls. Or credit him with her success. Ah! The things fame does to one. Or so we think as a viewer.

The story line of the movie moves in varying paces. At times, like life in the hills, it slows down and lives in romantic melancholy of evenings. When Beni meets Amit’s abandoned wife, played by Divya Dutta, everything slows down and the complexities of relationships become clear. The wife wants a companion, but is too afraid to say so. She loves him, but does not want to bind him to her.

The Character That Binds Everything

Divya Dutta portrays this nameless character of abandoned wife so well that she often carries the entire weight of the scenes on her. The way she approaches the role of a married but abandoned in the hill lady who wants her desires fulfilled by a stranger is more than praiseworthy. She is shy or coy in saying what she wants, and how. The defining moment of her role is when she leaves Shimla to go to another unnamed place, leaving the house unlocked with the keys in the lock itself. As if to say that she has got nothing to protect or hide now and they are all free to take what they can.

In the entire duration of the movie, it feels like Kaul is being torn between being a man-child and an adult. He has a certain sadness to him but is unable to pull it off due to lack of better dialogues and direction. His emotions are palpable but only when the canvas is white. In a vivid scene, where there are many distractions other than Beni, the background almost overpowers him.

Neena Gupta, Beni’s mother has been underutilized in the movie. For an actor of her stature and talent, there is surely she could do more than sit around the house and ask Beni if he drank too much the last night. There are flashes of brilliance in the little role that she has been given. The only problem, however, is how little of a role has she been given.

The treatment of Bagchi on the other hand is also immature at times. The movie tries to underscore the point that she grew tried of waiting for Beni and hence decided to become the nonchalant superstar singer that she is. However, Bagchi is shown to become that cold-heart person from the gigly hill girl without any character development. It is one of those good old 20-years later transformations, when no one but the protagonist can identify his paramour.

The songs, music and lyrics of the movie are a treat. The locations are picturesque and the cinematography is on the point. What is lacking in the story is the treatment of the story, and more screen time to Divya Dutta as well as Neena Gupta.