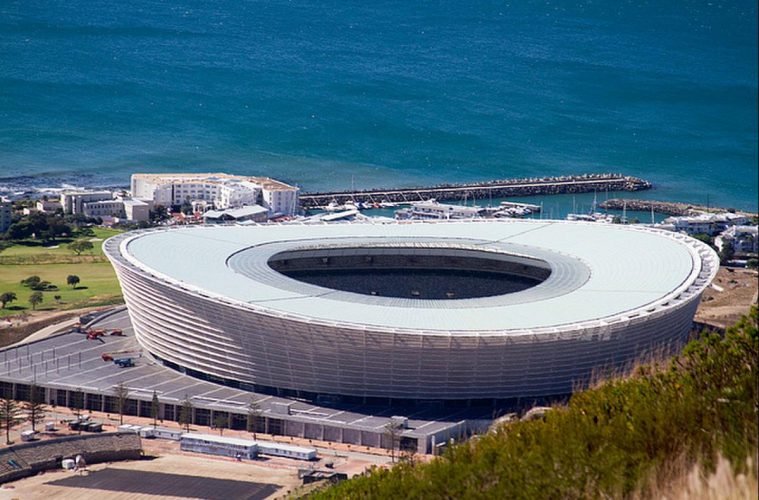 Not About The Game This Time: 13 Best Stadiums In The World

In a world divided by human perceptions of difference, sports is one of the universal unifying features for Homo sapiens. Other than breathing the same air, of course. Human spirit to compete manifests wonderfully in a range of sports that we so passionately view, support and follow. It may well be the only constructive manifestation of that spirit to defeat an opponent.

From gully cricket to world cups, from nukkad-kabaddi to worldwide championships, from Paleolithic archery to Olympic archery, the list goes on and on. While the commercial global sports industry is valued at more than a trillion USD, it is home to some of the most spectacular human creations, in the form of stadiums.

Global stadium architecture is one that can drop your jaw. A never-ending list of the best display of human imagination. Picturesque. Humongous-ly spacious. Each Unique and gloriously beautiful.

We present to you a list of *some* (because there are many more!) of the best stadiums in the world. 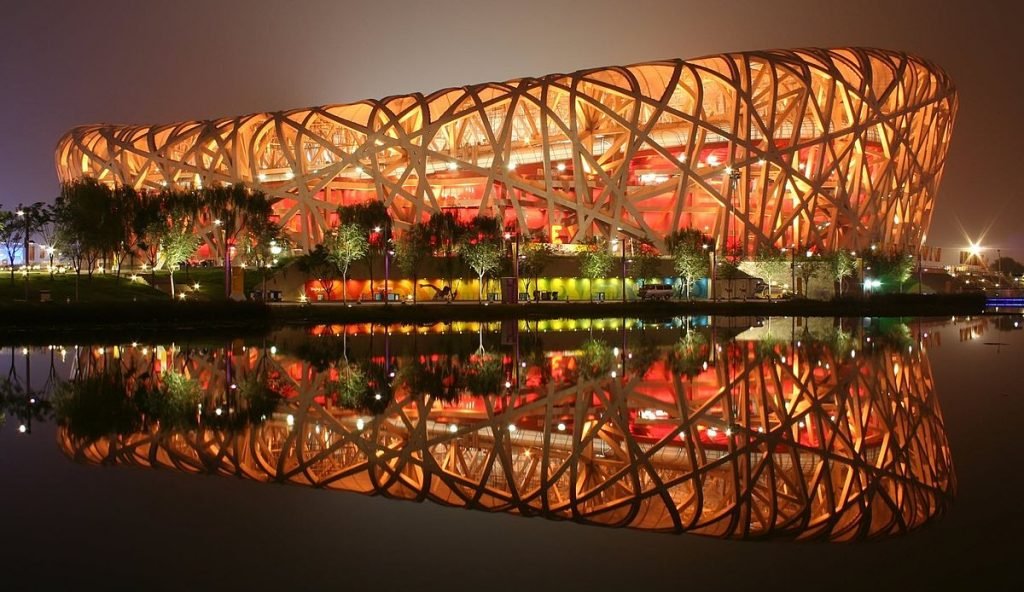 Nicknamed as “The Bird’s Nest,” this Beijing Stadium is remarkable, to say the least. Designed by Swiss architectural firm Herzog & de Meuron in collaboration with Chinese artists, the building flaunts a nest-like design.

The stadium is divided into two parts. The inner concrete bowl and the outer shell. However, the most striking feature is the exoskeleton which is a randomized curvilinear mass of steel. Built at a hefty cost of about 480 Million USD, the stadium has been a host of 2008 Olympics. Although, primarily built for the 2008 Olympics, the stadium was used for various events after the same. Including a Jackie Chan concert and some pageants.

The stadium is expected to be the venue for 2022 Winter Olympic opening and closing ceremonies. Therefore, making it the only stadium in the world to host both the summer and winter ceremonies. 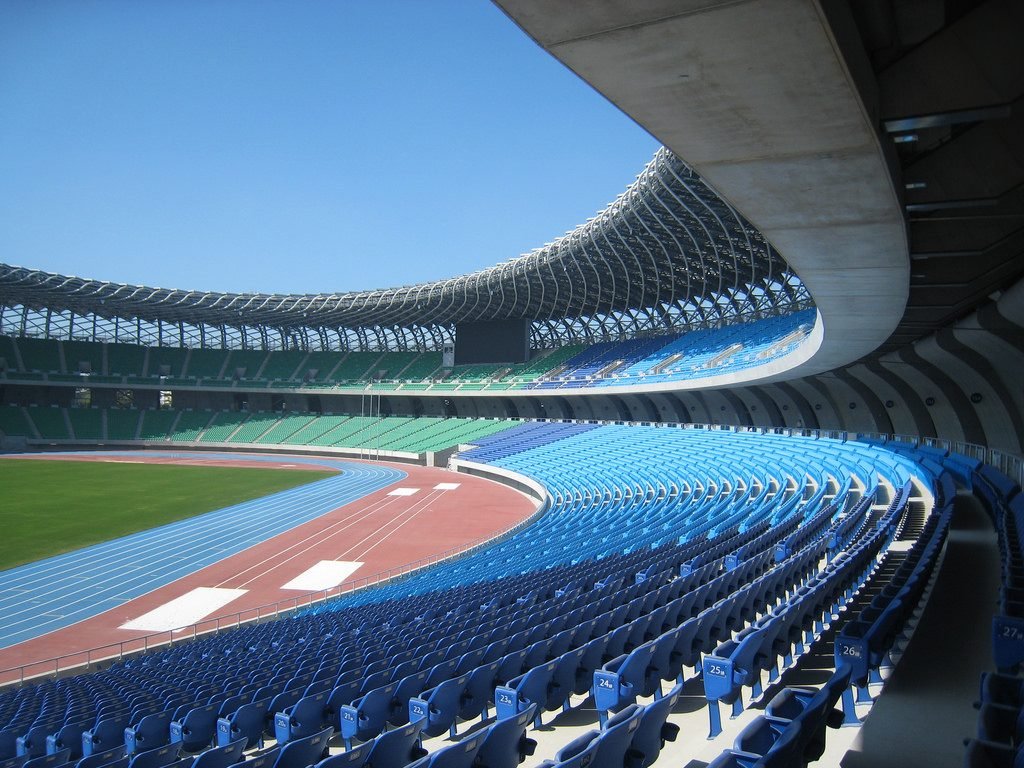 A human spectacle at display in Taiwan, this 55,000 capacity stadium is shaped somewhat like a question mark. However, what is most remarkable about this stadium is not just its structure, but its notable environment friendliness.

The stadium utilizes solar energy for practically all its purposes. With almost 5000 solar panels placed on the roof, the stadium harnesses more than a million kilowatt-hours energy per year.

Moreover, the buck doesn’t stop there. It is Taiwan’s first structure to be awarded a gold level green building for its standards in biodiversity, soil water content and CO2 reduction.

And intriguingly, the architect designed it in the shape of a winding dragon. Now that I know, I can kinda see it. 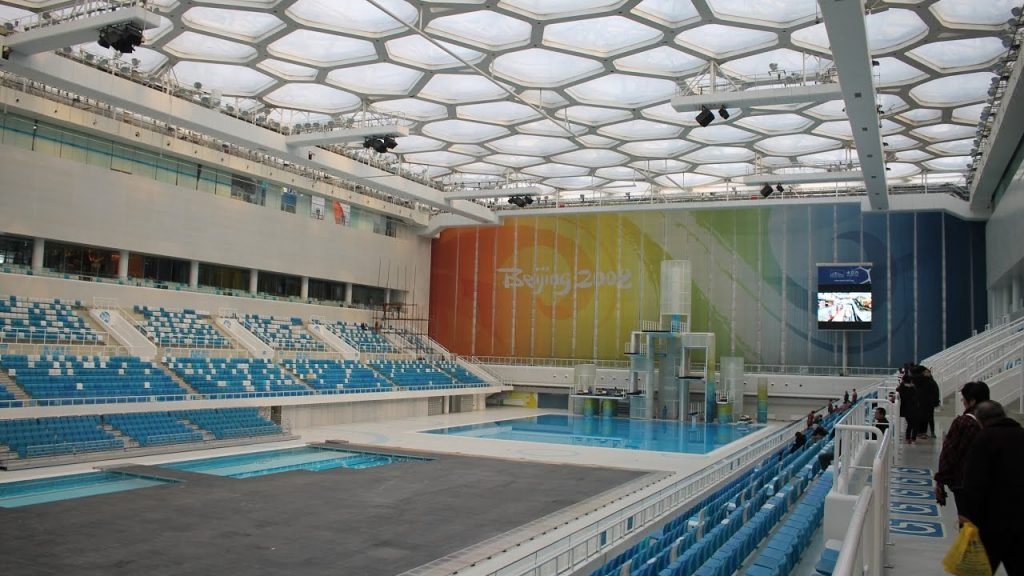 It is also known as the “water cube.” With an appearance resembling its name, the aquatics center was built in 2008 for the water games of the Beijing Olympics. It features an eye-catching unique exterior design which looks like huge bubbles mushed together.

At a construction cost of about 140 Million USD, it can house 17,000 people. However, what sets this stadium apart though, is the material that its exterior is designed with: EFTE. It is a polymer material that is transparent and transmits more light than glass. Bet you didn’t think there was anything more transmitting than glass, I didn’t!

What’s more, EFTE construction helps cut energy costs by about 30 percent in comparison to glass. Fun fact, it also has a surface area of more than a million square feet. Woah!

Post its Olympic stint, the stadium was revamped in 2009 wherein half of its interior was converted into a luxurious water park. The final building reopened in 2010 to the Chinese and international crowds. Despite its half-conversion, the water cube is all set to host the curling events at 2022 Winter Olympics. 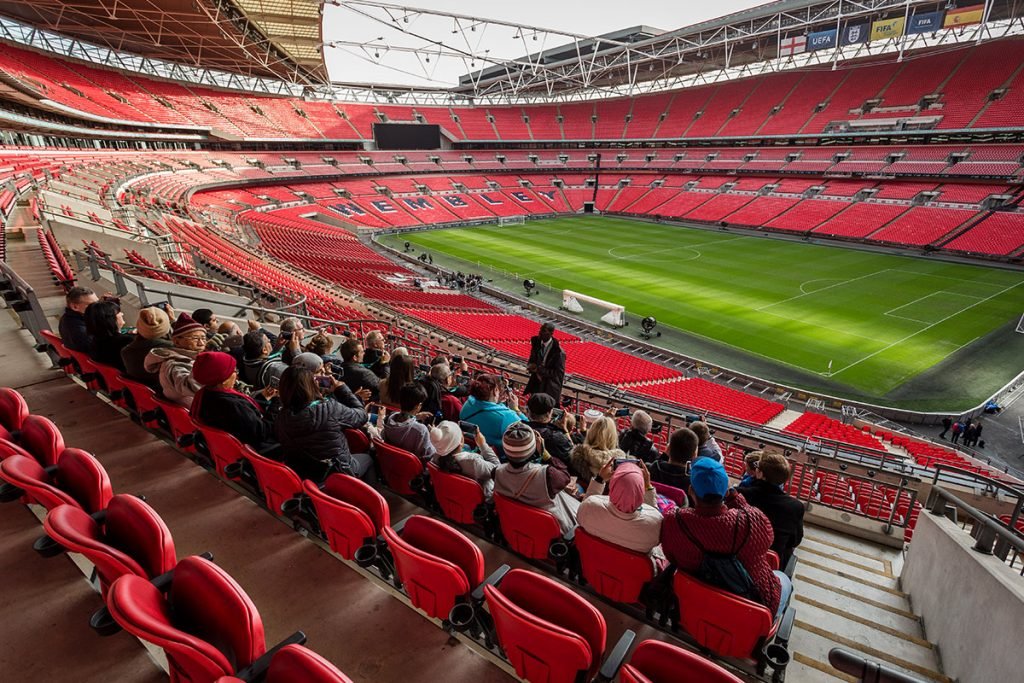 The pride of England, Wembley is a world-class stadium. Built at a cost of more than a billion USD, it is one of the costliest architectural marvels of its kind. It was built by the Australian architectural firm, Multiplex and designed by Populous and Foster and Partners.

Boasting a capacity of 90,000, it is home to the English Soccer Team. The stadium is owned by the English Football Governing body, Football Association (FA) and also serves as their headquarters.

The USP of this stadium is its iconic arch and the single-span roof. The arch stands at a height of 440 feet above the stadium. And the roof, the largest single-span configuration of its kind, is spread over a thousand feet. Not just that, it is also partially retractable.

One of the more unique features (and kinda thoughtful too) is that it boasts of 2600 toilets. Quite an attraction I must say! 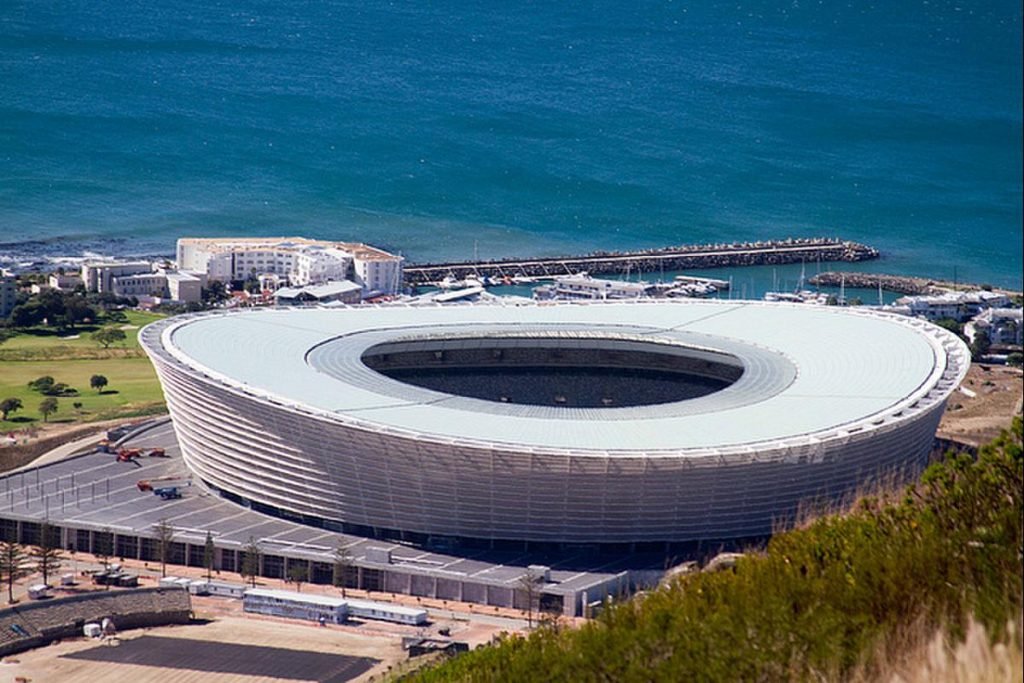 “The Diva of Cape Town” has been a recipient of quite a few architectural awards. This Cape Town spectacle houses 55,000 spectators (which earlier was 64,100 but was reduced) and has been a host of various sporting events including the 2010 FIFA World Cup. It also hosts concerts now and then.

The USP of the structure is its color-changing Teflon exterior. The woven fiber-glass responds to the shifting weather patterns of Cape Town by reflecting off different lights in different conditions. Consequently, it may appear red, grey or blue. 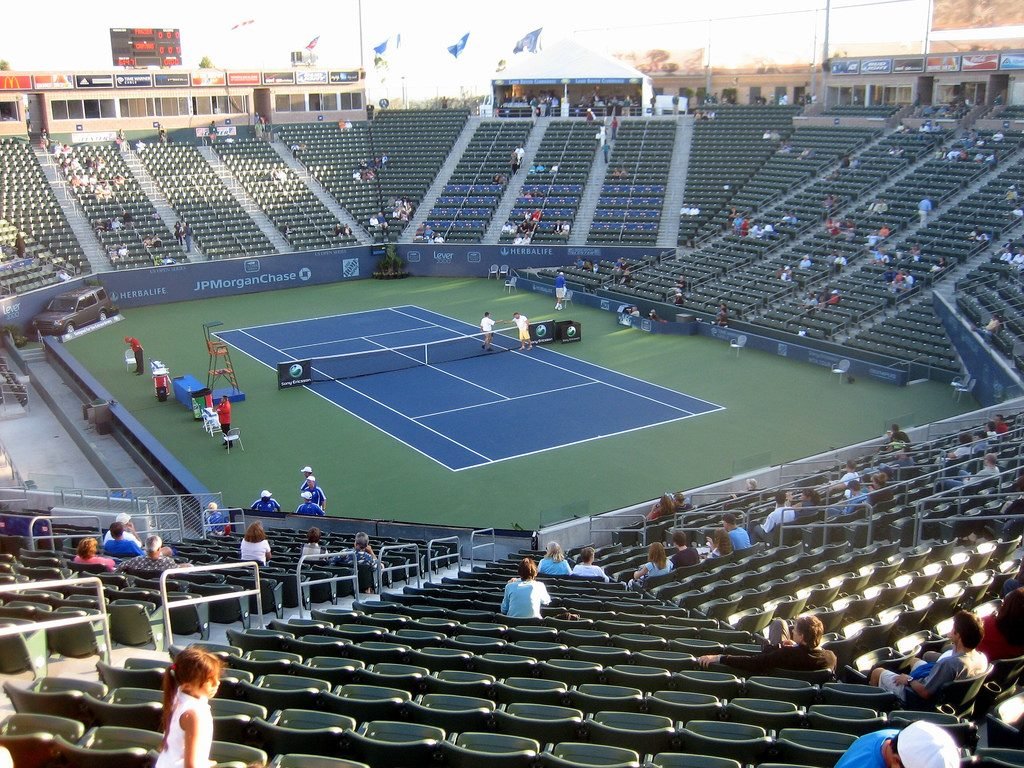 This tennis stadium in Shanghai was primarily built to host the ATP Championships. Most spectacular, is its magnolia-inspired roof. Magnolia which is the city flower of Shanghai, inspired the architects of this stadium to build a flower petal-like, retractable roof. The roof can open up like a flower with the petals pulled back in merely 8 minutes. Making it perfect for both indoor and outdoor games.

Moreover, apart from being the prime tennis arena in China, it was also the largest tennis ground of Asia until the 2007 opening of China’s National Tennis Centre in Beijing.

Yet, the stadium is an aesthetic marvel that hosts a variety of games including basketball and gymnastics. 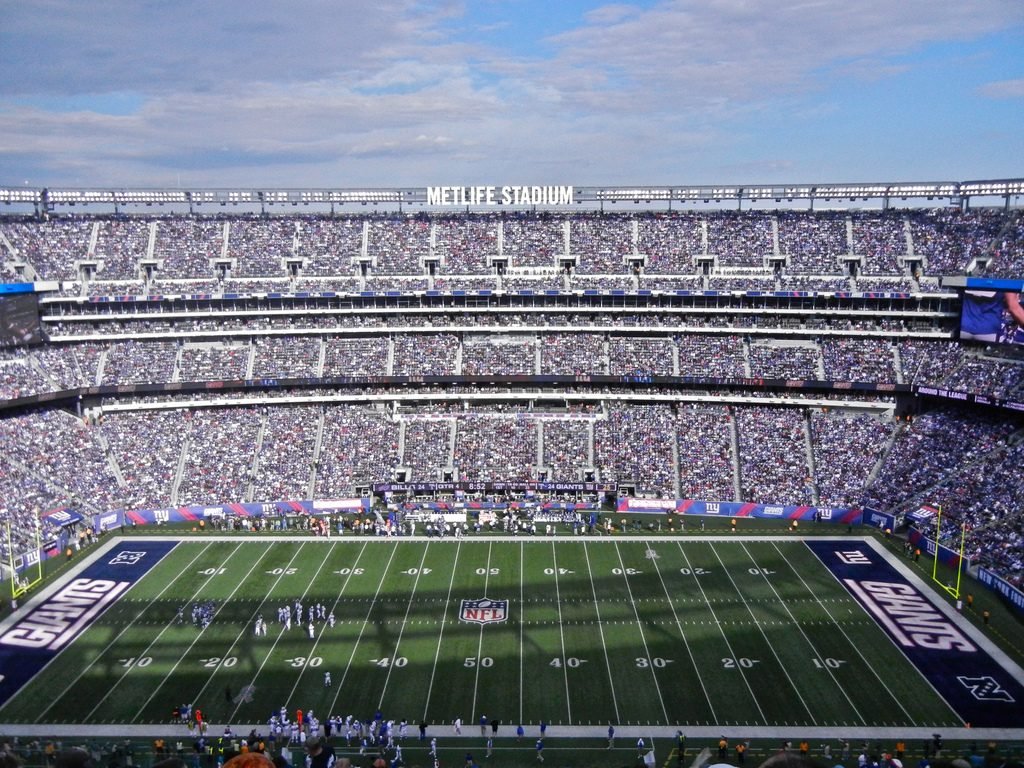 Located in East Rutherford, New Jersey, the MetLife stadium was originally built as the New Meadowlands Stadium. However, in 2011, Metlife bought the naming rights to the stadium.

The New Jersey stadium is a popular NFL hotspot and is home to two of the hot-shots of NFL: The New York Jets and the New York Giants.

It also has a surprisingly small carbon footprint for such a large structure. Moreover, its lighting can bathe the venue in green or blue lights depending on which of its home team is playing.

Owned by the MetLife Stadium company, a joint venture of the Giants and Jets, it is one of the very very few stadiums to host two teams of the same league in the United States. 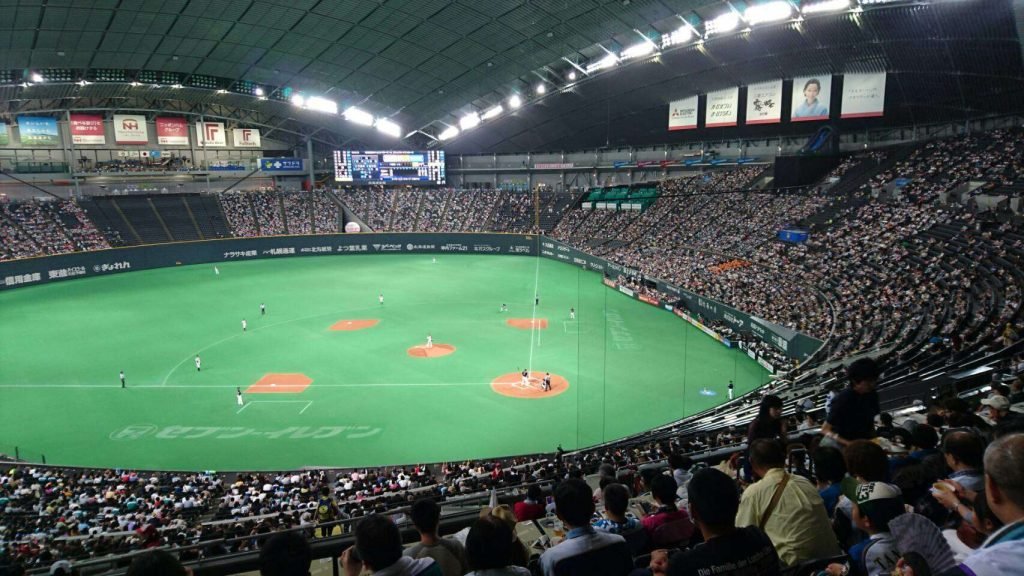 This Japanese stadium was built in 2001 with a capacity of about 56000. Located in Toyohira-ku, Sopporo, Japan, the stadium is a prime venue for baseball and football in the country. It is home to Hokkaido Nippon-Ham Fighters (baseball team) and Hokkaido Consadole Sopporo (association football team).

The Sapporo Dome, most recently, served as the venue for the opening ceremony of the Asian Winter Games 2017.

While its horseshoe crab-like appearance is one of its most distinguishing features, it is not the only one. The stadium has both a baseball turf as well as a soccer ground. But how is that possible, you may wonder? Well. It is engineering.

The grass pitch i.e. the soccer ground is a hovering field that is retractable. Now that is some serious engineering and design-skill! 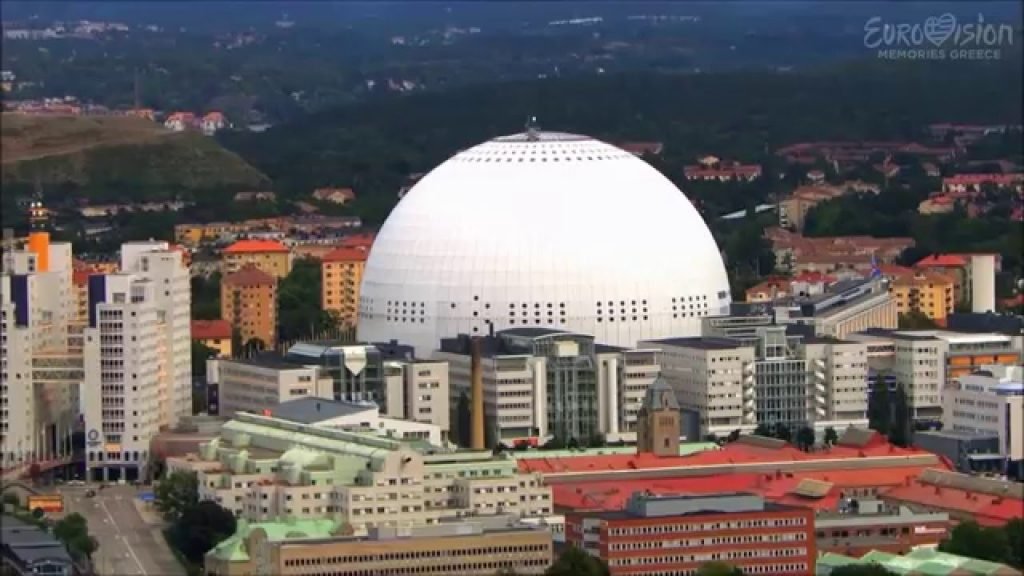 Located in Stockholm Sweden, The Stockholm Globe Arena is one of the greatest geometric architectural marvels of the world. As clearly given away by the name, the stadium is shaped like a giant globe. Although, just half of it.

With a diameter of 361 feet and a height of 279 feet, this white globe of a stadium was renamed the Ericsson globe in 2009. That is twenty years after its inauguration when the technology giant bought the naming rights to the stadium.

Moreover, the Ericsson Globe is the largest hemispherical building in the world. With a volume of 21 million cubic feet, it is the national stadium of Sweden located in Stockholm.

From hosting Ice Hockey Championships to Britney Spears Concerts, the stadium is one-of-its-kind. It also represents the Sun in Sweden’s permanent, largest scale model of our solar system. 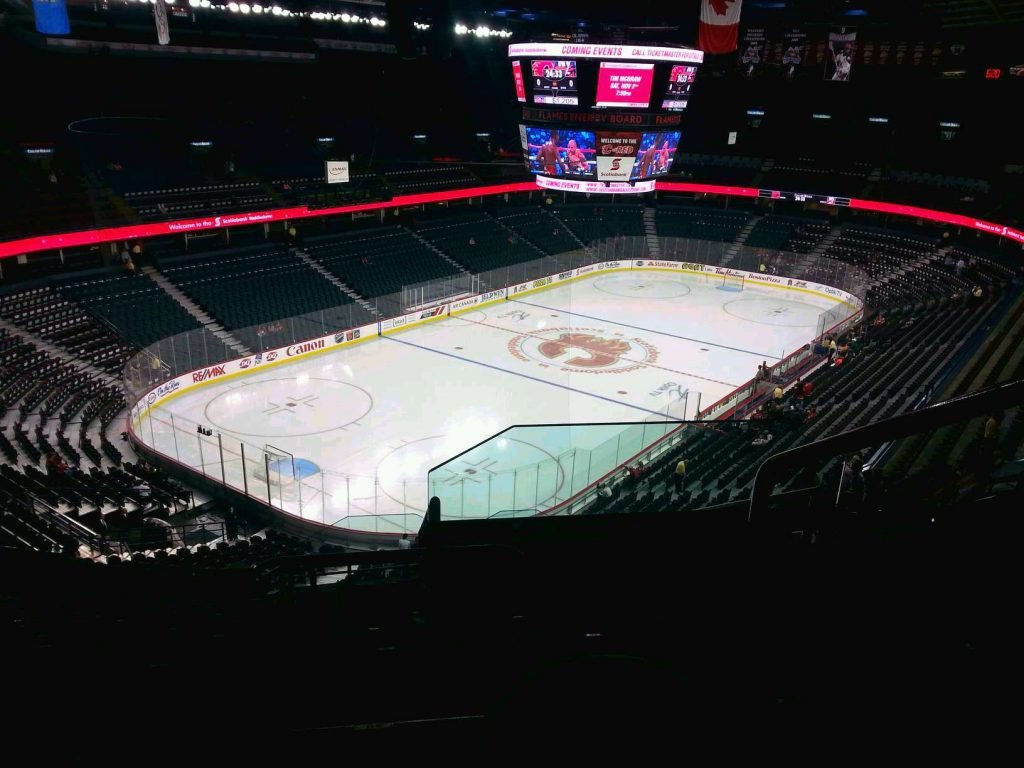 Located in southeast Calgary, the Saddledome is an indoor stadium in Canada.

This saddle-shaped roofed stadium of Canada is home to the National Hockey League’s team Calgary Flames. Built at a price of about 89 million USD, the stadium can house 19,289 spectators.

The USP of the stadium isn’t just one. It is the largest hyperbolic-parabolic structure in the world. The best one yet, the stadium can move about 3-inches in each direction to cope with Canada’s erratic weather conditions. 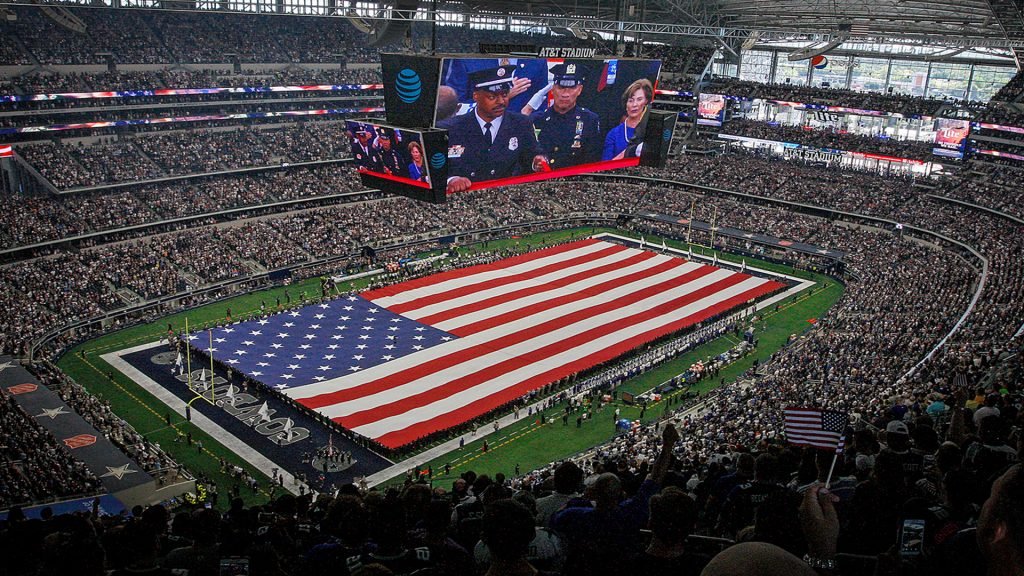 The AT&T stadium of Arlington, Texas is home to NFL’s Dallas Cowboys. Moreover, the largest domed structure of the world, it has a maximum capacity of 105,000 people. It is also one of the most expensive structures of the world, built at a cost of 1.5 billion USD.

Its notable features also include its large video displays. Huge, High definition video displays that are the fourth largest in the world.

Owned by the Cowboys manager, Jerry Jones, the stadium was expected to cost way less than it actually did. Which eventually became troublesome. However, the Texan sports spirit assisted its building. The citizens of Arlington voted in favor of a lot of additional taxes to get the stadium constructed.

Something we would never do, I believe! 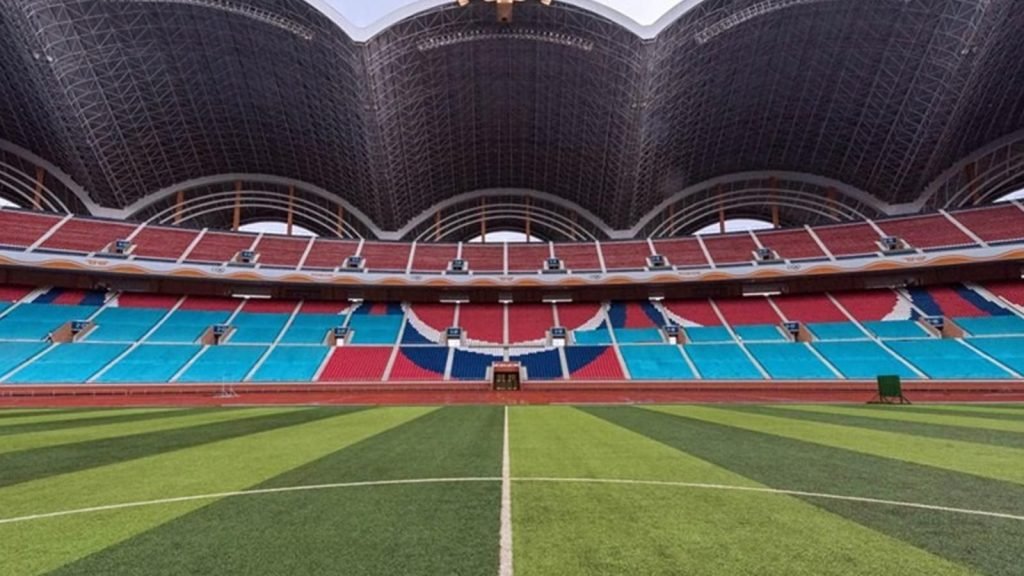 Completed in May 1989, the Rungnado stadium is located in Pyongyang, North Korea. With an area covering 51 acres, it is a humongous spectacle and serves as a multipurpose stadium. While it can host any and every game, owing to its massive structure, the most prominent feat at the stadium is the Arirang Festival.

However, most recently, it hosted some matches for the 2018 Asian Football Confederation U-23 Championship Qualification.

The largest stadium in the world, it boasts a floor space of 2.2 million square feet and a seating capacity of 150,000. Moreover, featuring a roof of 16 scalloped arches, it is one of the largest structures of the world. If not, The largest.

The almost-century-old stadium of Milan, Italy was first built in 1925.  The stadium plays home to AC Milan and Inter and is primarily used for hosting football events including the 2016 UEFA Champions League Final.

However, its most distinguishing feature is its eleven-tower structure which is the result of a long, tedious history. For a seating capacity of mere 35,000 fans.

While nature is the best creator of all, these mere human creations exemplify the extent of human imagination, design, and skill.