We have only gone halfway through the year and the smartphone game is heating up already. The industry seems to have declared a war on smartphone bezels. Smartphone industry is fighting to stave off the stigma of bezels. This pursuit of near perfection is the motivating factor behind pushing the boundaries of what smartphones can be. Apple did away with Touch ID entirely to pursue the path to a possible bezel-less future. Engineering teams are under tremendous pressure to rewire the inner circuitry of phones to maximize the screen real estate.

And now, Oppo has made one of the most radical redesigns of smartphone hardware design. They have achieved the unthinkable with Oppo Find X – the truest bezel-less phone. Find X has the highest screen-to-body ratio in a global smartphone yet. They have also managed to remove the abominable notch from the face of the planet. Touted as the Android’s iPhone X, Oppo has come up with one of the most radical innovation. Though not unique, and presenting a viable alternative to Apple’s, by their standards, unaesthetic – iPhone X notch. It boasts of a whopping 93.8% screen-to-body ratio, the best bet in world’s quest for the bezel-less glory so far.

This comes only a week after Vivo Nex breached the 90% screen-to-body ratio with 91.24%. This means that the bezels are almost completely gone from the top (1.91mm) and sides. The chin still remains intact, with a more noticeable 3.4mm bezel. This is due to a non-negotiable technical constraint. Find X removed the infamous notch that Apple helped make mainstream. 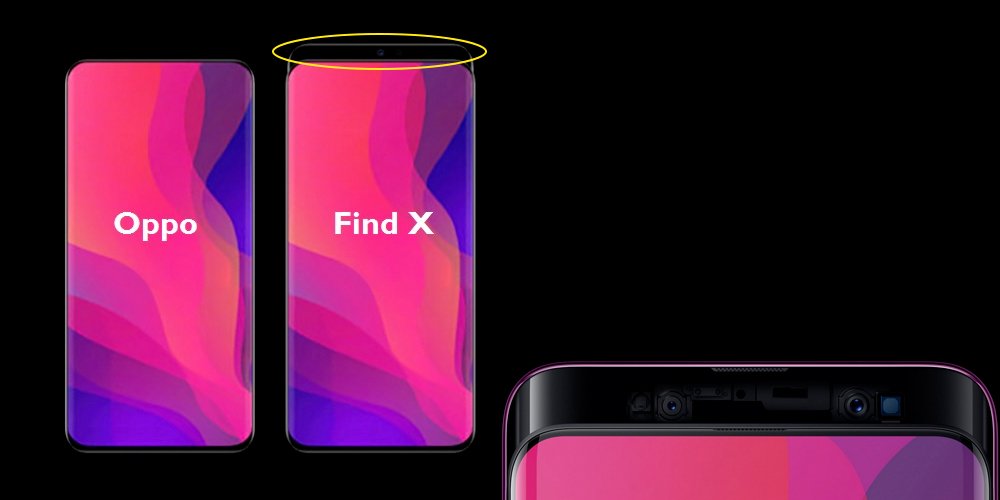 Oppo’s solution to maximize the screen-to-body ratio is really interesting and clever. Find X includes an elegant motorized camera unit which slides up each time any of the cameras is summoned. The camera unit pops up and goes back to hiding in about 0.5 seconds which is annoying only if you are insanely petty. Vivo Nex unveiled the first commercial phone with the pop-up camera mechanism just last week. However, Find X has implemented it in a much more elegant manner.

The front of the camera unit houses a 25MP selfie camera equipped with 3D modeling for the shallow depth of field (bokeh). The rear of the unit comprises of a dual camera setup with the primary 16MP camera along with a 20MP secondary camera.

In iPhone X, the notch served a purpose. It housed all the sensors that were critical for Face ID. Find X hides all the sensors in the elegantly movable camera unit. The motorized unit is more than just a gimmick. It stores flood illuminator, infrared camera, ranging sensor, receiver, front camera and a dot projector.

Some Concerns over the Radical Design

The pop-up camera unit, although a novel and well-intentioned alternative to the ugliness of the notch, does pose a few important questions. Find X (and Vivo Nex) introduce moving parts in a touchscreen smartphone for the first time in probably a decade, since the slide-out keyboards phones that were all but shunned by the majority.

Durability is an important concern. How trustworthy is the mechanism? Quite a lot actually, if Oppo is to be believed. According to Oppo, the sliding structure comes with fall protection. It is also durable for about 3,00,000+ times of popping in and out. That is, if the sliding unit is used 200 times in a day, it will still provide a lifetime of over 4 years. This is, in my opinion, 1 year too many in today’s day and age. Especially where features become obsolete in a matter of weeks.

Oppo’s 3D facial recognition technology, O-Face as they are calling it, is pretty snappy as well. It takes roughly a second for the camera to pop up, recognize the user and pop back in to unlock the phone. Face ID takes 1.2 seconds for the process and Touch ID takes 0.91 seconds. Although O-Face’s speed is not accurately known to the millisecond, it is pretty competitive for a non-global brand.

Some other concerns include dust, dirt, and water getting in the way of the sliding mechanism and we will have to see Oppo’s response and the real-life behavior of the phone to understand this better.

One of the most striking features of Oppo’s Find X is the absolutely stunning and spectacular aesthetics of the smartphone, from front to back. As Oppo describes it, “OPPO Find X is the world’s first panoramic designed phone, embracing the beauty of nature into a leading technology product. OPPO Find X combines two seamless pieces of glass with the front screen featuring a gorgeous panoramic view.”

The Panoramic Arc Design means that there are no holes or other features visible on the front or the back panels. The Stealth 3D cameras are built into the smartphone body.

Find X is 6.42 inches of absolute beauty, with front and rear made up of glass build. It feels premium, comes in two innovative gradient colors – Bordeaux Red and Glacier Blue. Any modern day smartphone seems to include this must have feature. According to Oppo, its camera analyses features such as face, nose, eyes to personalize the selfies. Its scene recognition technology is capable of recognizing 21 scenes and optimizing the settings for a better photo.

Well, since you invested so much technology in various sensors for facial recognition and removal of the notch why not have a fun little implementation with same? Enter Omoji, similar to Apple’s Animoji and Samsung’s AR emojis in form and function. Oh, and the headphone jack couldn’t make it. One of the most common casualties in this war on bezels.

Oppo Find X is expected to be priced at $1,100 for the 256GB variant, scheduled to launch in August. It will be Oppo’s maiden venture into the global smartphone market. It will be launched in a few European countries alongside its common markets in India, China etc.

Let’s see how Find X fares in comparison to other smartphones launching later this year; if anyone surpasses its screen-to-body ratio.