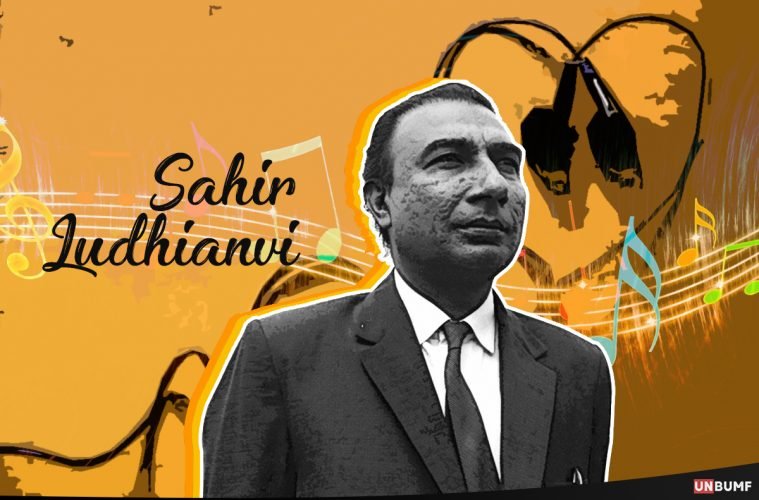 “दुनिया ने तजुर्बात ओ हवादीस की शक्ल में ,
जो कुछ मुझे दिया है वो लौटा रहा हूं मैं।”
Different from his contemporaries in various aspects, Urdu poetry through the pen of Sahir Ludhianvi had an intellectual element that caught the imagination of the youth and reflected the feelings of the people. He never minced the word, nor did he ceased the emotions, but expressed himself boldly and directly. It was his personality which gave Sahir his characteristic style.

Born as Abdul Hayee on March 8, 1921, in Ludhiana, Punjab; Sahir was the only son of a rich landlord, Fazal Mohammad. He was 13 when his father re-married. His mother, Sardar Begum, took a bold step and divorced his husband. Sahir’s father sued her for custody of his son but lost as Sahir chose to be with his mother. So, his formative years were spent under financial restraints.

Sahir did his schooling and higher education in Ludhiana, and since his college days, he became popular for his ghazals and nazms. It was however in 1945, that his first work Talkhiyaan got published after he migrated to Lahore. He continued editing for various magazines and also became a member of the Progressive Writers’ Association.

However, it was his inflammatory writings in the magazine Savera which caused the Government of Pakistan to issue a warrant against him. This made him flee to Delhi and eventually to Mumbai, where his journey with the Indian film industry started.

Sahir debuted as a lyricist with the film Azadi Ki Raah Par in 1949. However, it was the year 1951 when Sahir gained recognition with the movies like Naujawan and Baazi, with music by S D Burman. With Baazi, he skyrocketed to popularity and then never looked back. In his lifetime, Sahir worked with different composers including Ravi, Roshan, Khayyam, Madan Mohan and Datta Naik. He also collaborated with Baldev Raj Chopra until his death.

Sahir was an artistically temperamental writer. It was on his insistence that All India Radio began crediting the lyricists for their songs. Sahir also insisted that the music score should be composed for his lyrics and not the other way around.

Sahir was different from his contemporaries as his writings expressed the sensitivity of the declining values of the society.  His poetry never praised God, beauty or wine and his love songs possessed the tinge of sorrow depicting the other starker concepts more important than love.

Some excerpts from his songs and writings are as follows:

Sahir, like Faiz, gave Urdu poetry an intellectual element. He roused people from an independence-induced smugness. He would pick on the self-appointed custodian of religion, the self-serving politician, the exploitative capitalist, and the war-mongering super-powers. Sahir wrote enthusiastically about the arrest of progressive writers in Pakistan; the launch of the satellite Sputnik and the discovery of Ghalib by a government lusting after minority votes.

A bachelor for his whole life, Sahir fell in love with writer Amrita Pritam and singer Sudha Malhotra, but the relationships never fostered. He died on October 25, 1980, due to cardiac arrest and was buried in Juhu cemetery, Mumbai. On his legacy, Sahir wrote:

Despite decades after his death, Sahir continues to be immensely popular because of his expressive nature and closeness to reality.